I can’t believe it’s been a whole year that I have been writing CUT. When they say “time flies when you’re having fun”, they couldn’t be more right. Writing CUT for the past year has been immensely fulfilling and loads of fun. To all of the deckbuilders who have participated so far, you’ve been great to work with, and you really have delivered some amazing creations. When I say at the end of articles that I hope you come back, I mean it! Every one of you have been amazing, and I would love to you see again on this series. Another big thank you to everyone who has voted and commented on these articles; your support is what helps keep this going, and from the bottom of my heart I am incredibly grateful. Also, thanks to Commander’s Herald for keeping me on and allowing me to continue to run this series!

Moving right along, let’s see who won the 2nd CUT Redemption Round! 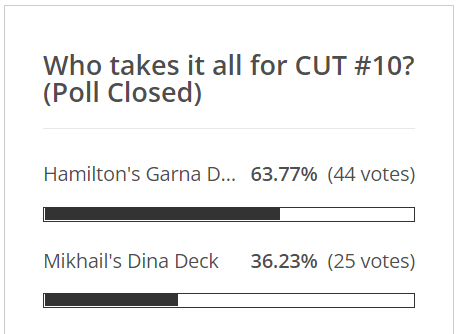 Congratulations, Hamilton! You finally made it over the hill and took home a victory. Alas, for Mikhail, the taste of second place is bittersweet, especially when it was that exact same position that got you here. But, hey, consistency is a skill not everyone has, so there’s that! Thank you all for participating in the second Redemption Round, and I hope to see you all again!

After a whole year of CUT articles, we have 10 (20 if you count the finals) different sets of rounds and challenges. I’m not including Single Slice as that one was more of a special rather than part of the main series, think of it as an OVA for all you anime fans out there. Let’s take a look back at which decks received the most votes in their respective rounds:

Looks like the top 3 decks were Sisay, Weatherlight Captain (by David in CUT #1 Finals), Tymaret, The Murder King (by Mike in CUT #8 Finals), and right behind it is a tie, with Cazur, Ruthless Stalker + Ukkima, Stalking Shadow (by Jake in CUT #7 Finals) and Garna, the Bloodflame (by Hamilton in CUT #10 Finals). Interesting spread of commanders/decks in our “top 3”. Perhaps there will be a special featuring all of these fantastic deckbuilders to really see who’s number one.

2021 (and into 2022) has been like a dream come true. I know I say thank you a lot, but I really do mean it! Another huge thanks goes to all of the guests and deckbuilders I’ve had on this series over the past year. Never would I have thought that I’d be writing a bi-weekly deckbuilding challenge series and get to talk to so many fabulous people. Never mind getting folks like Ashlen Rose, TappyToeClaws, and SolRingMTG to be the first to be featured on the first special article (which you all should check out if you haven’t already). It’s been a year to remember, and here’s to bigger things in CUT’s future!

Before we talk about CUTs future, let’s do a little check-in on the upgrades Sinclair, Ben, and I have made to our Holiday 2021 decks. Last time, you voted that I would win (and by all rights, I should have!), but instead Ben stormed off for the win. I will now present to you the upgrades that each of us made to the decks. Our upgrade “conditions” were that it was a maximum of 10 cards and a total value of approximately $60 (we made the changes circa Jan 2022) for all 10.

After we were all upgraded and ready to rumble, we played a game to really see who used their upgrades to the fullest and improved their deck overall. Of course this is Commander, and anything can happen, from mana flooding to mana screw, so the ending is hard to predict. That’s where you come in: vote in the poll down below for which deck you think will win this time around. I’ll report back in the next article with which deck won. Also, let us know who you think made the best upgrades, and what you would’ve done!

I have many plans for CUT’s future; there are some bigger, better, and more interesting and skill-challenging challenges down the road. With more and more people joining the CUT roster, we’re slowly getting enough folks to run a tournament-style series. What that will look like exactly is still in the works, but rest assured it will be awesome. I plan on bringing more Magic: the Gathering content creators on, and also folks who may not create content, to see how they handle these challenges and to see what they do. If there’s someone you really want to see on this show, let me know! I am always excited to work with new people and get their perspective on deckbuilding. Currently I’m working on the logistics of running a CUT video series. There would be a round of deckbuilding, and then a game afterwards to see how the decks actually play. My goal is by the end of 2022 to have it off the ground and running!

I can’t wait to see what the future has in store for CUT. All I know is that I am going to keep working and planning to make CUT the best it can be. What was your favourite deck that’s been created so far? Let me know in the comments below!

Next week we are jumping into Kamigawa: Neon Dynasty right before we’re bombarded with spoilers for Streets of New Capenna. Stay tuned, and remember: if you don’t love it, CUT it!

If you or a friend are interested in being a part of a future article, feel free to email the.only.travis.stanley@gmail.com or @ me on twitter @chipman007