Welcome to CUT!, the article where we take deck builders, not unlike yourself, and put them through multiple deck building challenges to test their brewing capabilities and stretch their tinkering skills. If you are new here, catch up here, if not, continue on!

This is the third, and final, time that I will be talking about this particular deck idea, and I feel it is time to put it to rest. May I introduce to you my preliminary list for a token strategy built around Riku of Two Reflections. First, I took the concept from my Esix Fractal Bloom deck and just added red. The main strategy here is that I want to make token copies of everything and then replicate those tokens. Not only do I get to add Brudiclad, Telchor Engineer to the deck, I get to add cards like Flameshadow Conjuring and Mirror March. Riku being the Commander allows me to copy spells like Brass’s Bounty for maximum value. After playtesting this deck, I might even build it in real life! Though, I already have a Trostani, Selesnya’s Voice deck (aptly named “Trostani’s Token Tavern”) it has been my only token deck for many years now, and I try to have only one deck of a certain strategy at a time. On the flip side, Riku is one of my favourite cards, so I might make an exception and build Riku as well.

Enough about me, let’s get on to the Finals for this round! 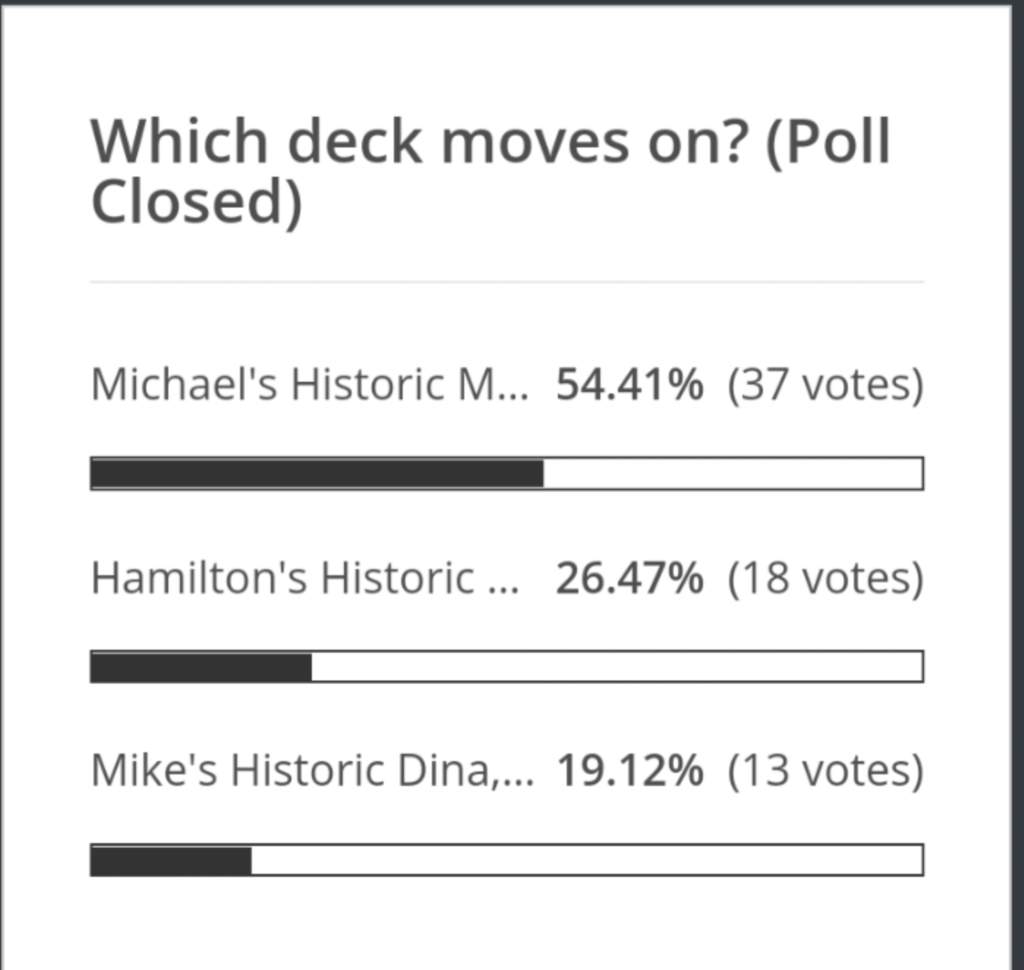 Wow! What a round that was! All of our deck builders had fantastic entries, but of course only 2 may move on to this round, so congratulations to Michael and Hamilton!

A big thank you to Mike for participating, and thanks for showing us your favorite strategy using Dina, Soul Steeper at the helm. I really hope Mike is back again soon! You can go and check out his latest article here.

The challenges our Finalists were given were as follows:

**When asked for clarification on whether or not the Commanders themselves had to be a Wizard, Druid, Warlock, Shaman, or Cleric, I told the deckbuilders that only the creatures in the deck had to abide by that rule.

Our first Finalist that is presenting today is Hamilton!

The first round proved to me two things: My opponent is very good and VERY crazy. I gotta bring my A game to get ahead here. Luckily I have some experience in Pauper, and any Pauper player knows that when you're restricted on your rarity, the common quality lies in blue. So hopefully my commander choice here brings me an 8-vote lead because today I've brought Octavia, Living Thesis!

Octavia can make any creature base power and toughness 8/8 whenever we trigger her Magecraft ability, turning our weeny creatures into serious threats. That's a lot of potential damage, but she herself is a 10 mana creature. Luckily blue excels at filling the graveyard with the myriad of cantrips at its disposal, from Mental Note and Thought Scour, to classics like Preordain and Ponder. If we have 8 of these spells in our graveyard Octavia is reduced to an entire TWO blue mana! We also have a litany of looters such as Jace, Vryn's Prodigy, Thought Courier and Baral, Chief of Compliance to help fill our graveyard and draw us into some of our cheap spells, filling out our roster with Search for Azcanta (which flips into a very useful land eventually) and good old Fact or Fiction. A few other draw options, like the fresh new Archmage Emeritus and format favorites Mystic Remora and Rhystic Study (surprisingly, NOT Rares), will help us draw even more. My personal favorite is an Hour of Devastation sleeper in Champion of Wits. His enter the battlefield trigger lets you draw cards equal to his power and discard two afterwards. If we target him with a spell while his ability is on the stack, Octavia will bump him to an 8/8 and we draw EIGHT cards!

Course we're not playing a bunch of creatures so we need some ways to help guarantee we have targets to give some tentacle power. While Docent of Perfection is stuck on the bench after having lost his tenure at the local community college, Murmuring Mystic is still very much employed as a Wizard, and his 1/1 Bird tokens are a choice target, as are the Illusion tokens produced by Meloku, the Clouded Mirror. The flying sharks granted to us by Shark Typhoon will also carry us to victo-Reid (like Tara Reid? Sharknado? No? You're voting for the other deck? OK I'll stop now). In a similar vein is the new Deekah, Fractal Theorist (an option I considered for our commander before finding out that our command zone is NOT subject to the tribal restriction we're working with here today). Fractals are base 0/0. Octavia will often turn them into a 9/9 or 10/10, sometimes even higher, at the cost of not being able to be strictly on theme with making their power eight. We've also got cards like Distortion Strike and Cloak of Feathers that not only trigger Octavia, they'll give the creature she targets evasion!

I'd like to take this opportunity to mention the flashback package we're running as well. Obviously flashback is a good mechanic, especially with our strategy, but we're able to turbo-charge our road to a 2-drop Octavia with Quiet Contemplation. This is Buried Alive for flashback cards, and given that there's one that mills us for 3 more when we flash it back in Dream Twist, we're very likely to get to Octavia extremely quickly while also banking an Artful Dodge or a Defy Gravity for later. Mission Briefing and Snapcaster Mage also play into this, allowing us to give flashback to things that didn't even have it in the first place!

In the meantime, we have a litany of counterspells to protect our creatures (Stubborn Denial is particularly sweet since Octavia will always give us Ferocious) and shut down one of our worst enemies: Graveyard hate. Our graveyard is very important and having it hit with a Relic of Progenitus can shut off any future castings of Octavia. Board wipes are also something we have to keep aware of, and hope that we can pressure our opponents life totals harshly enough that our counterspells will help us push through to the end. Octavia is fortunately extremely resilient with a Ward of a whopping EIGHT, which is basically hexproof.

Just don't get outplayed by Plaguecrafter like I did during testing and you SHOULD be good!

Thanks Hamilton! Did I ever mention how Octavia has eight instances of eight on the card? No? Okay, moving on!

Following Hamilton is Michael! Let’s see what he has!

I was told that the commander for this particular challenge did not have to be a Wizard, Druid, Warlock, Shaman, Cleric, Gideon, or Wainwright - but that didn't stop me from going one step further. Yedora, Grave Gardener is how I'd describe myself tending to my basil plants. A 5/5 Treefolk Druid for 5, Yedora turns corpses into canopies and smiles into frowns. This deck's druidiotic strategy yields more mana than you know what to do with and on a budget of only $125.

Taking inspiration from my college years, I've surrounded myself with a bevy of dorks like Arbor Elf, Elvish Mystic and Llanowar Elves to accelerate the early game. And much like myself in college, a lot of them can't tap that, so some settle for untapping that. Try using creatures like Stone-Seeder Hierophant and Krosan Restorer to reset lands enchanted with Wild Growth or Dawn’s Reflection for twice the enchantment energy. Use that mana to chain together creature spells and draw a load of cards off Beast Whisperer and Guardian Project or just cast your commander early.

Once Yedora’s exploring, you’ll want to make an army out of your arboretum as soon as possible. When a creature dies, it simply comes back as a Forest, so Forest creatures are soldiers so disposable they make battle droids blush. Of course, Living Lands and friends animate your lands en-masse, but don’t forget that druids do it too. Awakener Druid, Kamahl, Fist of Krosa and Quirion Druid each have the magic touch, and you can quickly find whichever you need with a Pyre of Heroes.

Just like real life, trees make great Blasting Station fuel, but we don’t necessarily have to clearcut the Amazon to win. Our focus on Druids means that Coat of Arms and Vanquisher’s Banner become significant threats, and I’ve never once felt guilty when stealing everyone’s land with Gilt-Leaf Archdruid. If you draw into Realmwalker, who is in fact a Druid as well as a Giant Ouphe, you’re in for some easy card advantage. If you need a creature back from the dead, you can also pick up your Forest creatures with a Slab Hammer. Morph creatures like Ainok Survivalist can simply be turned face-up, and if any of your crucial pieces go missing just cast Regrowth to return them to your hand.

The power of this mono-green deck is undeniable, but I’m sure that didn’t surprise you. Just don’t gloat too much when you win. I never want to see the phrase “tips Yedora” in print. Oh, damn. Can we edit that out?

I’m getting a vision…”You shall be victorious until Great “Michael” woods to high Dunsinane hill shall come against you!” Don’t know what that was about...

Now that you’ve been dazzled, surprised, and/or turned into a newt, it’s time to vote. Scroll on down and choose the winner for this round of CUT!

Deck builders have been chosen for the next round! Their challenges are located below and you will see their creations in the next article. Keep an eye out for that one, it’s sure to be a modern masterpiece. Remember if you don’t love it, CUT! It.

If you, or any of your friends want to participate in future CUT! Articles, feel free to send an email to the.only.travis.stanley@gmail.com!