This is a little bit of a special article in many ways; for one, it’s my last article of 2021, which to me is a pretty big deal. I never would have thought that I would be here making written Magic content. I would like to give a huge thank you to the Commander’s Herald team/family. Thank you all for being so awesome and a great team to work with this year, I hope I get to keep doing this and keep working and making awesome content with y’all!

Another reason why this article is special is because it’s about what inspired me to put forth and create this series in the first place. This will be like CUT’s origin story.

Before we get into that, I want to congratulate the winner, who managed to find their way to the top of Mt.Victory from our Redemption Round! 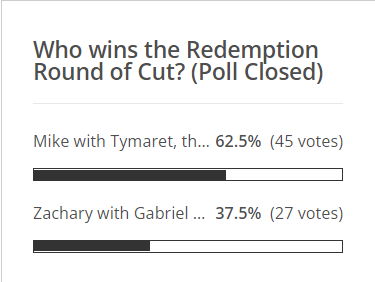 Congratulations to Mike! You did it! A winner is you! As they say, third time’s the charm, and Mike, you charmed your way into our hearts and into a victory on this round of CUT! As always on CUT I would like to thank the contributions of the runner-up, and this time this was their first time as a runner-up, which is a feat in itself. Thank you Zachary for your contributions and your awesome deck techs, they were also an incredible pleasure to read!

Now it’s story time, so sit by the fireplace (or heater if that’s more your vibe), and let’s dive in shall we?

It all began one Christmas where myself, my brother Ben, and our friend Sinclair all wanted to get each other a Commander deck for Christmas but didn’t want to buy precons (as we already owned most if not all of them). That’s when I had the fun idea of creating decks set around a set of perimeters/challenges. We all agreed and got to crafting a set of challenges that seemed difficult but still fun and achievable.

That first year I made a deck for my brother that, to this day, he says is one of his most favourite decks he has ever played. It was a Licia, Sanguine Tribune life gain deck, and oh boy, did he run with it. For the next year or two he kept that deck, improved it, and it became a staple in his collection. Over the years he eventually took it apart, as one does, but he always says that it’s a commander that he goes back to whenever he wants to build something new.

My deck that year (gifted from Sinclair) was a Zurgo Helmsmasher deck; it was an aggressive deck, doing things that Zurgo typically wants to do. In our round 2 (which I talk about about a little later), I transformed the deck into one led by Akiri, Line Slinger and Tymna the Weaver, followed by a drastic pivot to Shu Yun, the Silent Tempest, before it eventually became a deck I still own to this day, Narset, Enlightened Master

There’s a special kind of magic that can come out of adding a personal twist on a deck. That’s why ever since then, we’ve made each other decks for Christmas with various challenges. Last year we made decks that had to have Partners as the Commanders; I received Sakashima of a Thousand Faces and Vial Smasher the Fierce, Sinclair received Armix, FIligree Thrasher and Silas Renn, Seeker Adept, and Ben received Kamahl, Heart of Krosa and Bruse Tarl, Boorish Herder. Since they also act as a “Christmas Gift”, we started including a wishlist of cards that the builder had to include at least half of in the deck. Let me tell you, those decks were a blast and really showcased the benefit of having two creatures in the Command Zone. In fact, I had so much fun, my deck is still together and mostly the same from when I received it!

This year our challenges were to build a deck themed around a certain card type. We got together and put out the categories: Creatures, Artifacts, Enchantments, Instants/Sorceries, and Planeswalkers. Rolled a d6 (and on a 6 we rerolled) until we each had a category to build around. As fate would have it, we all rolled a 4 and had to build each other’s decks around Instants/Sorceries. We also had the wishlist challenge and a budget of around $120, just so we can make sure that the decks are somewhat balanced against one another.

Let’s see what each of us came up with…

Here is what Sinclair made for Ben:

Here is what I made for Sinclair:

And, finally, here is what Ben made for me:

After we create and exchange the decks, we play a game with them to see whose deck comes out on top. These games are always a blast and we really get to see how well we know each other by how well we can pilot the decks made for us. This weekend we all exchanged decks and played them. There will be a poll down below so you can guess who won, and I’ll announce the winner in my next article!

Are we going to keep these decks together? For the time being, sure, usually we play a round 2 of sorts about a month later with a budget increase used to add upgrades to the deck. In a future article I’ll mention what upgrades we made and how we changed the decks.

There you have it, the humble origins of Cut! The idea that started out as a gift-giving challenge has evolved to what it is today. Who knows, it may even change in the future and look completely different this time next year.

Thank you to all of you who have been reading, voting, and participating, it has been a true pleasure to continue to write these. Next time we’ll jump right back into the CUT challenges with some spicy (and very fangy) builds with challenges themed around Crimson Vow, so stay tuned!

I hope all of you have a happy new year and see you soon! If you’re looking for a good New Year’s Resolution, this one’s always a classic: if you don’t love it, CUT it!

Thank you again for reading, and I hope to see more of you in future articles! If that’s something that peaks your interest, feel free to send an email to the.only.travis.stanley@gmail.com.