Redemption. “The act, process, or an instance of redeeming” is the Merriam-Webster’s definition for the word. How does redemption relate to Magic, and more specifically, Commander? Well, in terms of the Magic story, Liliana has a redeeming moment where she (spoilers?) turns against Nicol Bolas (during War of the Spark) and does the right thing instead of the easy thing; because of that, she starts to disintegrate and die. Gideon then steps in and passes on his magic to her and thus dies himself, and has his own redemption in the afterlife for the deaths of his “irregulars” which happened way back in the past.

Back to Commander, redeeming yourself in a Commander game is usually not so epic or valiant; it could be a new deck you brought to the playgroup that made games more fun, like a switch from stax to group hug. There are many little ways to redeem yourself in the eyes of your playgroup. If you alter your playgroup’s perception of you in a positive light from a more negative one, I believe that’s redemptive too. Today, I bring you folks from CUT’s (very short) past who didn’t quite make it to the Finals of an article and now have a chance to redeem themselves.

Before we get to those, let’s find out who ended up winning the last round! 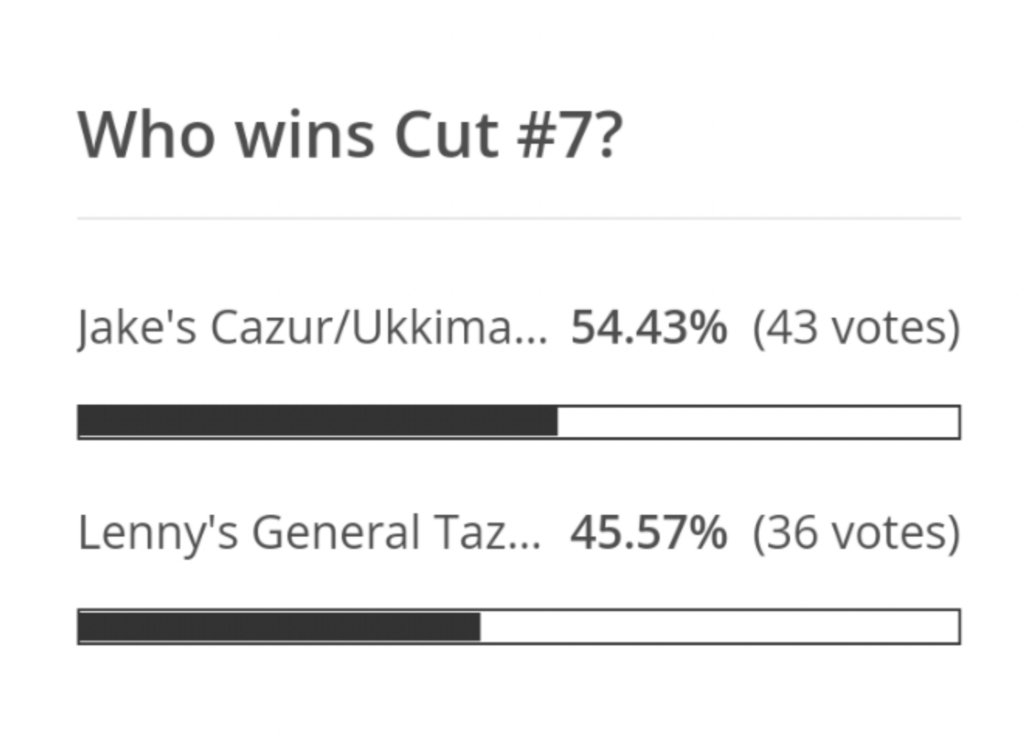 Now lets see if these other deck builders can get the redemption they deserve!

The challenges they faced were:

– Commander has to have 500 decks or less on EDHREC

– You can only use 4 out of these card types and none of the others (Creature, Enchantment, Artifact, Planeswalker, Instant or Sorcery)

– You can only have 4 rare/mythic Land cards

First up is Mike. Mike has already been on CUT two times already, and in both he hasn’t quite made it to the Final round; will this be the time?

I’ve been drawn to Kels, Fight Fixer since the Azra Warlock was printed. I never quite knew what to do with them considering I’ve already got a few Dimir decks and enough aristocrats decks for now, which is the build that one is most obviously drawn to with Kels.

But then I thought it would be funny if Kels decided to take things into their own hands and just start whacking people. The deck is Kels, Fight Fixer Voltron. Silent Arbiter and Kels having menace means unblockable (*wink wink*), and with enough Equipment and support to get through, Kels can get in there and do some real damage. Having enough ways to make creature tokens to sacrifice to Kels to keep them indestructible means they’re the perfect Equipment workhorse. This deckbuilding exercise was pretty cool. I wanted to do something different with a commander I felt drawn to, and I did. Give the deck a playtest. It’s very fun and may become a physical deck for me soon.

Thanks Mike! Sweet and short! Will Kels fix this fight for him? You decide!

Next we have Zachary; last time we saw him he brought us a spicy Ayula, Queen Among Bears deck! Let’s see what he has in store for us today!

I’ve always been a big fan of graveyard strategies in Commander. I started playing the format with the 2015 Meren of Clan Nel Toth deck and have since fallen in love with the archetype. However, most of the really good graveyard/reanimator commanders have well over 500 decks on EDHREC. There is one significant exception, though, and one that is very unique. Have you ever heard of… mono-white reanimator?

Enter Reya Dawnbringer, a nine-mana-value Angel with two simple effects. She has flying, and she lets you reanimate one thing from your graveyard during each of your upkeeps, although it doesn’t matter how powerful our commander’s abilities are if she can’t make it to the battlefield in the first place. As such, we’re playing a lot of ramp.

You may not believe it, considering that white has been the laughingstock of the color pie for the past decade or so, but white can ramp pretty well nowadays. We’re running obvious inclusions, like Archaeomancer’s Map, Keeper of the Accord, and whatever artifact ramp we can reasonably play. But we also get extra value from creatures that happen to ramp us, so cards like Knight of the White Orchid, Solemn Simulacrum, and Burnished Hart gain extra value here. MVP in this regard is Geode Golem, which helps immensely with powering out Reya early.

Now that we have Reya on the battlefield. But she’s going to be a big, juicy target for removal, right? How do we keep her out there so she can do her thing? Easy: we use protection like Teferi’s Protection, Rebuff the Wicked, and Bastion Protector. Or, if she gets destroyed, we can just let her go to the graveyard and grab her back with an Emeria, the Sky Ruin, Karmic Guide, or Emeria Shepherd.

So we’ve cast Reya, we’ve managed to keep her around to our upkeep. Now she needs things to reanimate. How are we doing that in white? With things like Perpetual Timepiece, Millikin, and Altar of Dementia. Unfortunately, it will only be inevitable that we mill things other than creatures, like spells and lands that we would have rather had in our hand, which is why we’re playing cards like Sun Titan, Sevinne’s Reclamation, and Divine Reckoning that can be used or activated, themselves, from the graveyard. Drownyard Temple is surprisingly solid in this deck as ramp from the graveyard, and Hostile Desert gives a bit more value to the lands we will inevitably mill.

Last but not least, we need some card draw and removal to round out the rest of the deck. We’re playing the regular suspects for each, of course, but with a couple fun ones thrown in as well. Council’s Judgment is a non-targeting exile removal spell that gets rid of at least one thing on the field that I’m surprised doesn’t see more play in this format. Rout is white’s version of Cyclonic Rift and can potentially shift the momentum of a game.

All in all, Reya is one of my favorite little-known commanders of all time, and I’m so glad that I was able to share her extremely one-of-a-kind mono-white reanimator strategy with you all.

Awesome stuff, Zachary! Mono-white is always looked down upon in the EDH community, but that deck looks very strong in its own right. I hope it’s strong enough to get you a spot next time!

Finally it’s Sinclair! Sinclair was on the very first article of CUT, oh, how long ago that was… anyways, time to see what he cooked up for us today!

To not draw too much attention, you will want to stay unthreatening for the beginning of the game, only playing cards like Sakura-Tribe Elder and Satyr Wayfinder and slowly filling up your graveyard with creatures that when you reanimate will become huge threats that your opponents will have to deal with. While it’s a smart idea to fill up your graveyard with Perpetual Timepiece, the real reason it’s in the deck is to act like a protection spell for your graveyard. Torment of Hailfire and Rise of the Dark Realms are secondary wincons in the deck if you are unable to get in with your large graveyard creatures wearing a Whispersilk Cloak or carrying Hot Soup.

The largest pitfall that I found while building this deck is due to no instants in the deck, you can’t respond to anything anyone else is doing, especially graveyard hate. What you are generally tutoring for with Razaketh, the Foulblooded is anything that has the ability to disrupt said hate, like Reclamation Sage or Meteor Golem; it sometimes become a moot point if they have already exiled your graveyard, but that is the nature of all graveyard decks.

Thanks, Sinclair! Like Mike, very short, sweet and straight to the point. As we all know, Old Stickfingers is right behind you, but will that be enough to send Sinclair to the finals? We will see!

You are now in control of their destinies! Who will make it to the Finals for the first time? Remember to vote below, and let me know in the comments how you would’ve tackled these challenges. As always, if you don’t love it, CUT it!

If you or anyone you know, or if you have some challenges you would like to see on CUT please email the.only.travis.stanley@gmail.com