When you get down to 3 players in a Commander game, you sometimes find that one person ends up in the position of a “kingmaker”. If you’re unfamiliar with that term, it means that, while they have the power to dictate who wins the game, they usually don’t have any leverage to win themselves. There are moments when they’re just about to get knocked out of the game but cast Hellish Rebuke on the opponent that knocked them out, essentially giving the other player an advantage which could ultimately give them the game. I’ve heard folks discuss the ethics and sportsmanship of such a move, but at the end of the day, the game has to end, and the quicker the game can end, the quicker you can get another one in and play more Commander.

Fortunately, this week’s CUT we already have eliminated that possibility of a third player and now have 2 finalists to duke it out for the win. Who will we see this week? 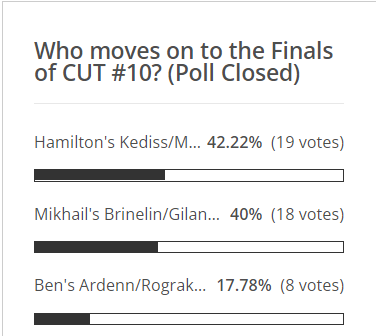 Congratulations to Mikhail and Hamilton! You made it back to the finals and one step closer to redemption. Thank you to Ben and his Partner entry of Akiri, Line-Slinger and Rograkh, Son of Rohgahh; it was a fun Boros deck, but unfortunately it looks like it wasn’t equipped enough for the win. Better luck next time, I’m sure we’ll see you again!

Here are the challenges that our finalists had to work with:

First up is Mikhail! I wonder what he brought us today?

Hey, y’all! For this week’s submission for CUT! I decided to take all of my favorite cards from my previous CUT decks and build Dina, Soul Steeper. Although she may seem fairly unassuming at first, she can quickly take out a player with commander damage or play a long game of attrition and hold out with the rest of them. As a student of Strixhaven, you’ll see many cards representing Witherbloom in the deck, and the remainder of the deck supports the school’s philosophy. Dina uses a combination of two fairly prevalent Commander archetypes, sacrifice and drain, and the deck is built around using related strategies in order to get the W.

Sacrifice is a major theme of this deck, and Dina’s activated ability is an engine you have in the command zone. Dina’s ability takes advantage of a creature’s power to get in more damage or to get more value with cards like Disciple of Bolas and Jarad, Golgari Lich Lord if damage won’t get through. Another strategy is to sacrifice small disposable creatures, like tokens from Pawn of Ulamog, in the service of large creatures to proc Dina or to have standalone threats. These cards include Carrion Feeder, which gets bigger with each creature you sacrifice, Daemogoth Titan, which just needs to sacrifice a creature each time it attacks or blocks, and Victimize, which uses any two creatures to recur your most potent threats from the graveyard.

It helps to have evasion-enablers, whether they’re granting trample,in the case of O-Naginata and Garruk’s Uprising, or intimidate in the case of Bellowing Tanglewurm. It’s also nice to take advantage of death triggers from great enablers, such as Moldervine Reclamation, allowing you to draw a card and gain a life with each death, and Pitiless Plunderer, letting you get mana needed to propel your strategy beyond your opponents.

Along with sacrifice, the major way this deck wins the game with life drain. With each creature death comes a life drain trigger, either from target opponent or from each opponent depending on the drainer. Dina’s triggered ability allows you to turn 1 loss of life into 2 with each trigger, and that can make all the difference in certain board states.

The drainers are typically fairly inexpensive, mana-wise, like Blood Artist and Zulaport Cutthroat, so they can come down early. You get an extra Dina in Sanguine Bond but I did not include Exquisite Blood because I didn’t want there to be a two-card combo, which is typically pretty boring. While your opponents are losing life until they eventually have none left, it’s also helpful to use your life gain for some synergies with cards like Silversmote Ghoul, Mortality Spear, and Beledros Witherbloom, that latter of which allows you to basically have an extra turn every turn if you have the life for it, and trust me: you will.

This deck works a few different unassuming angles that your opponents, knowing that you don’t have Exquisite Blood, may just write off because your commander natively only has 1 power. After being drained out and smashed by Dina with trample, that might be the last time they underestimate the school of Witherbloom.

Thanks so much Mikhail! Witherbloom has taught us that life is a resource as long as you have plenty of it, so hopefully it can fuel your first victory!

Last but not least, we have Hamilton!

I’ve been squarely in the Jeskai wedge throughout my CUT entries, but for this article I wanted to get back to my favorite pastime, necromancy. We’re dumping things in our graveyard and pulling them right back out, en masse at that.

Garna, the Bloodflame comes to us from Dominaria (and Commander 2020 and Ultimate Masters, giving us plenty of powerful cards to draw from), and while she came many years ahead of the “Rakdos Renaissance” we’re experiencing now alongside the likes of Prosper, Tome-Bound and Karazikar, the Eye Tyrant, she’s got some deceptively deep lines of play in the “Secretly Really Sick Rakdos Legend” club founded by Grenzo, Dungeon Warden. Let’s take a look.

Your Safety Net is Now a Strategy

Garna is an example of a card that seems decent, if not special, able to flash herself in and return any of our creatures that have gone into our graveyard that turn back to our hand. When she was spoiled in 2018, I thought of her as the kind of commander that could helm a deck filled to the brim with board wipes, but not much else. However, her ability importantly returns EVERY creature that goes into your graveyard. If Garna herself dies (say, due to one of many sacrifice outlets we happen to have in this deck for no particular reason) and we choose to place her in the graveyard instead of your command zone (which you always have the option to do) before her triggered ability resolves, she herself will return to your hand amidst all the others, waiting to be deployed for her effect again.

Abusing this timing trick, we can almost play in a manner similar to a Marchesa, the Black Rose deck. Aristocrats is the name of the game, sacrificing our creatures before Garna brings them all back to our hand, giving us a variety of value each time we do it. As long as we have the mana to do so, we can redeploy this every turn.

To facilitate this, we have a pretty low curve as well as multiple ramp spells to ensure we can run out several creatures each turn while still being able to use Garna. The usual suspects are there, such as Arcane Signet and Mind Stone, as well as a few mana dorks, like Scuttlemutt and a myriad of Myr, themselves being creatures to support our strategy. We also have the potentially explosive Black Market, which can represent massive swings in mana advantage. All of this is enabled by our nine sacrifice outlets, like Barrage of Expendables, Altar of Dementia, and Goblin Bombardment (alongside several one-shot ones like Burnt Offering and Deadly Dispute).

We have several creatures in the vein of Blood Artist to turn this into a game-winning advantage. Mayhem Devil, Thermopod, Midnight Reaper, and more all gain us advantages when our creatures die, whether it be damage, mana, or card draw. Juri, Master of the Revue and Gray Merchant of Asphodel can represent even larger instances of spike damage that can outright kill players.

When Minions Won’t Do, Use a Mook

We’ve also got a more Big Red Button play if this slow burn playstyle isn’t gonna cut it. That button is Dockside Extortionist. He’s more than proven his power in the format already with the massive mana advantage he tends to give you, and here he’s the key to a powerful combo. You’ll want to be able to generate at least seven Treasure tokens when he comes into play (also known as ‘a modest Dockside’: it’s surprisingly easy) and have a sacrifice outlet. By sacrificing the Dockside and then Garna (with her trigger still on the stack, always with it on the stack), the two will return to your hand, and you’ll have the seven Treasures waiting to cast them both again and repeat. If your Dockside (or your added Pitiless Plunderer or Pawn of Ulamog) generates you MORE than seven mana, then you immediately have infinite mana.

Once this Dockside/Garna loop is established, we can plug in any of our creature death value pieces. Add in Solemn Simulacrum to draw your deck, Altar of Dementia to make your opponents lose their own, a Blood Artist, Hissing Iguanar, Fanatic of Mogis, or a good old Gary to drop all of our opponents’ life totals an infinite amount, and you’ll secure the win. There’s also a similar combo involving Priest of Urabrask, Priest of Gix, and Ashnod’s Altar, though that obviously requires a few more specific cards.

This gives us a deck that is resilient and tricky to disrupt, since removing our creatures is fairly ineffective. Protect your sacrifice outlets and REALLY hope your opponent isn’t playing a wheel deck, and you should be able to drain them with a slow death. Or a giant blaze of golden glory. Dealer’s choice.

Thanks, Hamilton! Will the sheer amount of value from this Garna deck get you the win? We’ll have to wait and see!

Now that they’ve presented their creations for you for this final round, who will taste glory for the first time, and who will greet their familiar friend, defeat? That’s for you to decide! Remember to vote down below on which deck struck your fancy the most.

Check out the next CUT article to see who won! Thanks again for reading and voting on these fabulous decks. If you or a friend would like to be a part of a future CUT article feel free to email the.only.travis.stanley@gmail.com or catch me on twitter @chipman007 ! Remember if you don’t love it, CUT it!