It might seem ironic as I write a series about deckbuilding and challenges therein, but recently I have been having a form of “deck builders” block. I went out and purchased the Innistrad Midnight Hunt Commander decks, then proceeded to build 3 whole decks out of them. One The Scarab God* (I had to change it to Gisa and Geralf because my play group got angry when they saw big bad Scarab boy) Blue-Black zZombie deck, an Eloise, Nephalia Sleuth aristocrat-type artifact deck and a Lathiel, the Bounteous Dawn lifegain/ +1/+1 counter deck. My favorite right now is Eloise because of how different the deck plays from most decks that I have built in the past. What these decks all have in common though is that they are just stripped parts and modifications from a new product. Don’t get me wrong, I love new products, new cards, and new precon decks, but building from ground zero and up just hits different compared to building from a precon. Fortunately, I do write an article series that is about building from nothing but a couple of prompts! Speaking of prompts,  let’s see who made it to this week’s finals!

Lets see what the poll says.. 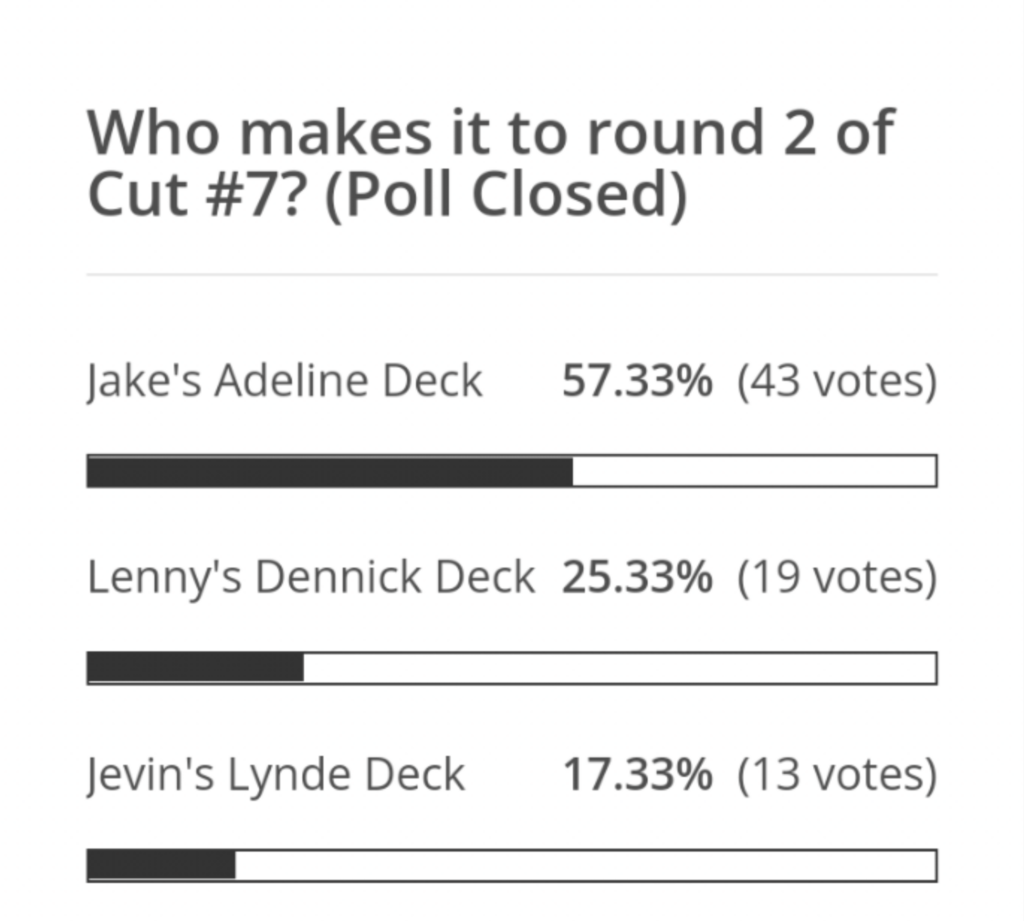 Congrats to Lenny and Jake! You have made it to this week’s article. A big thank you to Jevin who showed us the power of curses with Lynde, Cheerful Tormentor, and I do hope (like those Curses with Lynde) we will see him again! If you don’t want to wait until then, go ahead and check him out over on EDHREC!

The challenges that were sent out to our finalists this week were as follows:

Presenting their spoils first is Lenny!

For this challenge I wanted to build either a Wolf or a Werewolf commander, but I didn’t find the available options appealing. Instead, I settled on using a secret commander with a human as my real commander. Orvar, the All-Form happens to be a legendary Wolf, Werewolf and most importantly an Ally we can find when we cast our official commander, General Tazri.

I set out to build a Wolf tribal deck with the purpose of using Orvar to make a bunch of copies of Silverfur Partisan, which will in turn make more wolf tokens every time you cast an instant or sorcery targeting a Wolf or Werewolf. Tokens seemed like the way to go for a creature deck when you can only have 13 creatures max. If we have a spell to target our artifacts, we can make more wolves by copying Wolfrider’s Saddle which will snap on our token to make it bigger and evasive. Since we can reasonably find ourselves holding up an instant to make use of Orvar’s ability Nightpack Ambusher is a fantastic anthem and token maker. Just imagine having four of them. Raised by Wolves not only gives us tokens, but also the potential to take a player out with commander damage. Finally, Tolsimir, Friend to Wolves turns our token production into a removal spell.

Once she finds Orvar, there is still work for Tazri to do. We can copy her to find any ally so there are a few more targets for her to find. Kalastria Healer is a potential win condition or a way to keep our life total up. Multiple copies of Zulaport Cutthroat make it dangerous to wipe the board. Tajuru Beastmaster can pum up our team. As it turns out, Allies even have something to contribute to wolf tribal thanks to Turntimber Ranger.

Most of the 13 instants and 13 sorceries in the deck are dedicated to targeting permanents to get mileage out of Orvar. Whim of Volrath and Mind Games are well known quantities in Orvar decks, but since we have five colors to work with, we can use things like Seething Anger, and Momentary Blink. Since our commander is white, we can use View from Above to repeatedly target creatures and give them flying. There are also a few protection spells such as Blacksmith’s Skill, Simic Charm, and Boros Charm in case opponents want to go after Orvar. When possible, our cards can target our permanents to make copies as well. While it isn’t a targeting effect, Song of the Worldsoul will generate insane values with our secret commander.

Since we’re leaning on so many one shot effects, it’s important to keep the cards flowing. Having a maximum of ten rares or mythics can make this a little awkward, but with only 13 creature spells in the deck, Whirlwind of Thought is well worth one of those spots. Season of Growth does a ton of work here as the game plan revolves around targeting creatures with spells. Since we plan to attack Military Intelligence and Reconnaissance Mission make sense. Vanish into Memory does a lot of work here as card draw, temporary removal, protection, and a way to trigger Orvar. Finally as much as it feels like cheating Rhystic Study was originally printed as a common so in it goes. Besides, the prospect of multiple copies of it is too juicy to pass up.

Unfortunately one place the deck suffers is the mana base. Much of the best fixing in the game is rare and I didn’t want to spend my limited slots on that so the deck may stumble a bit in early turns. I recommend taking a mulligan for a green source.

Overall I’m really into this idea. I was not expecting the overlap in Wolf and Ally tribal and the deck is certainly unique. While I have experience building these kinds of decks with my own General Tazri five color Zada, Hedron Grinder deck I certainly would not have come up with this wild idea were it not for the restrictions. I may actually build this sometime in the future.

Thanks Lenny! That was a heck of a deck and General Tazri has always been a personal favorite card of mine. Good luck! You can check Lenny out on EDHREC with his article series “Power Sink”.

Next up is Jake FitzSimons!

This week’s cut challenge was… not easy. There are a total of two legendary werewolves, three legendary wolves, and a whopping 409 legendary humans. I was caught between a tiny pool of furry friends and a great ocean of fleshy ones.

My heart told me wolves, but my brain told me humans. I’d love to have built Tovolar, Dire Overlord but who wants a tribal deck with only 13 creatures? Then I remembered the partner mechanic exists, so why not the best of both worlds? Enter Cazur, Ruthless Stalker the human warrior and Ukkima, Stalking Shadow, the whale wolf.

The moment I realized I was in Sultai and working with such powerhouse commanders, I figured that if I was in for a penny, I’d be in for a pound. So I present to you the most outrageously busted deck I could possibly build within the restrictions I was given.

To begin with, Cazur essentially does what he says on the tin. Whenever we connect with a creature, that creature will grow just a little bigger, a little more threatening. It isn’t much to look at given the quality of creatures we have at our disposal, but nevermind that. The real meat of the deck revolves around Ukkima.

Ukkima is a slippery threat that can’t be blocked, and is available as early as turn two with a mana dork opener. Growing every turn with Cazur, he can get out of hand quickly. Ukkima is also the centrepiece of the namesake combo, but we’ll get to that.

Building a three colour deck with a rare/mythic budget of 10 means that some of the best lands are out of reach. We can’t run fetches, bondlands or even painlands, so I’ve had to be creative with where we get our colours. Thankfully, good mana rocks and land tutors are plentiful.

These uncommon fixers should solve any mana problems. As far as what to spend that mana on, it’s no secret that Sultai contains the finest card advantage pieces in the format.

Can you believe none of these cards were rare on printing? On a powerlevel axis, they could pass for mythics in Commander. Landing even one of these should give you more cards than you know what to do with. While Ukkima swings with impunity, your hand will stay full, giving you all the interaction and advantage you could ask for.

Speaking of swinging, we’ve also got Curiosity and Snake Umbra which pair nicely with Ukkima. Any sort of card advantage is good in its own right, but in this deck it brings us closer to our game winning combo. As for our interaction, some of the best countermagic in the format is within the common/uncommon range.

Unassuming, but with high versatility and low CMC, protecting our board is easy. Crucially, they also protect our win, a cheeky infinite combo that uses Ukkima to its maximum potential.

Yuck. What are we even looking at? What it may be, Food Chain allows us to exile creatures for mana, an effect that ranges from barely useful to gamebreaking, depending entirely on what you’re feeding it.

Whenever we exile these Innistradian monsters, we’re free to recast them from exile. Everytime we do this, we net one mana. See what I’m driving at? We can do this until we have infinite mana, at which point we loop with Ukkima instead. This loop drains 2 life with each repetition, effectively killing every other player at once. Pretty damn cheesy, right?

I thought this would be enough, but I wanted to go full throttle, so I also found room for the dreaded Thoracle combo. It’s beyond obnoxious and utterly broken, but I’m not here to pull my punches. Demonic Consultation also has unique synergy with this deck.

The usual combo is as easy as ever as long as you name a card that isn’t in your deck (I like to name Pot of Greed or Blue Eyes White Dragon) but Demonic Consultation is especially nasty with Food Chain. All we need to combo is Food Chain, a “cast from exile” creature, and Ukkima. We’re free to cast this forbidden tutor naming Food Chain, and we don’t mind what we exile along the way. In fact, hitting Eternal Scourge or Misthollow Griffin is ideal, because that way the exiling is done for us.

Yes, sometimes you’ll name Food Chain and hit it in the top six, but that’s part of the thrill of playing with this sort of power. And that’s the wolf whale warrior wombo combo in a nutshell!

Thanks for reading, and thanks to everyone who voted for Adeline last week!

Awesome stuff Jake! Love to see some “partner with” commanders getting some love on this series. Way to see the challenges and make them work in your favor! Check out Jake’s article series “Revising the Rules” here on Commander’s Herald.

Thank you both for your fantastic submissions. This is going to be one fierce round of competition, that’s for sure. You know what to do now, vote below for the winner of this round of CUT. Next round we have some familiar faces returning to the CUT stage to get some redemption from their last time on the series. Until next time, stay sharp, and if you don’t love it, CUT it!

As always if you or anyone you know would be interested in being on a future CUT article feel free to email the.only.travis.stanley@gmail.com

The challenges our deck builders will be facing next article: