Now that the spoiler/release train has slowed down quite a bit, we can all take a moment and breathe. As we dive down into the dungeons of Adventures in the Forgotten Realms, there are a grand total of 30 legendary creatures to build around! Me oh my, that’s a lot of options! I can’t wait to see them all. There are some real hidden gems among the uncommon Legendaries. Gretchen Titchwillow is one a lot of people are comparing to Thrasios, Triton Hero, though she isn’t as powerful, just being compared to the incredibly strong Thrasios is a very high compliment. Another creature I really like the design of is Kalain, Reclusive Painter. Making your creatures bigger when you spend treasures on them is not only pretty flavorful, but adds more value to the treasures you have. Lastly Krydle of Baldur's Gate is a shoo-in for any rogue decks, or any decks that need evasion. In today's article, we get to see one of these notable uncommon legends, a scary dragon, and a very well known character from the Forgotten Realms!

Before we get there though it’s time to announce the winner of the last CUT challenge! 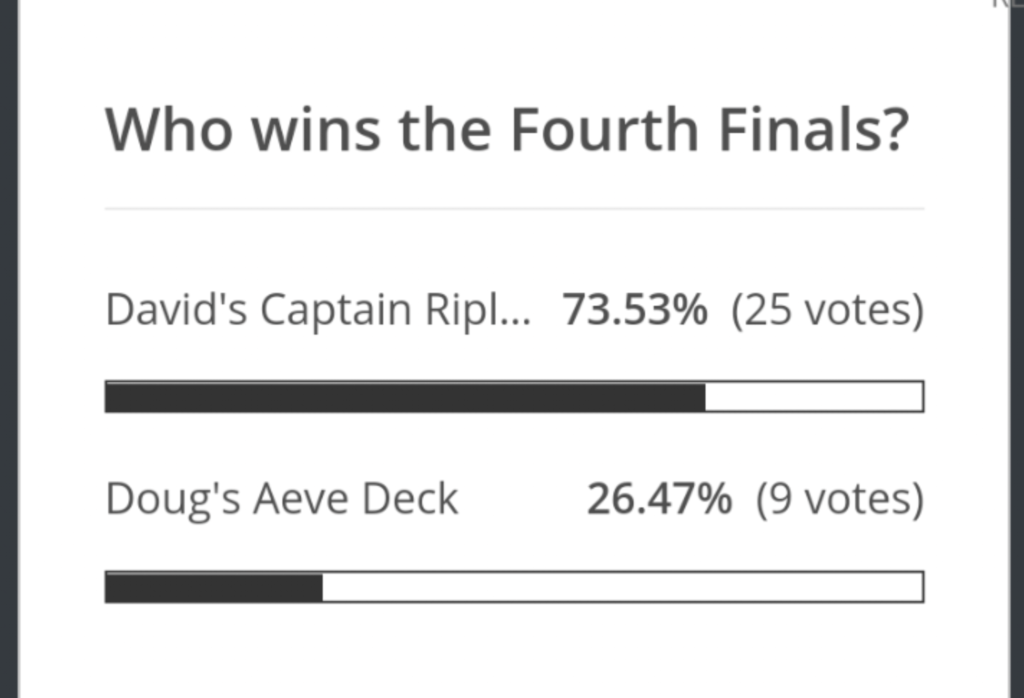 Congratulations David! A strong start with Yawgmoth, Thran Physician and his super friends, then Captain Ripley Vance showed off her Vance's Blasting Cannons and pulled through for you in the end.

A big thank you to Doug for participating! We had a grand adventure with you and Wort, the Raidmother, and had a slimey good time with your Aeve, Progenitor Ooze deck!

I hope to see both of them again!

Onto the main event!

In case you missed it, here are the challenges our current deck builders had to face:

First up is Jordan!

The restrictions for this Quest of Deckbuilding forced me to actually look at the commanders from Adventures in the Forgotten Realms, something I’d apparently just straight-up neglected to do. With a requirement about auras and equipment, the obvious choice was Bruenor Battlehammer, but if there’s one thing I love more than Boros, it’s cats. And while there isn’t a Cat-mander in the set, there is a guy that brings one with him, so close enough. (It’s a good thing I didn’t go with my second idea, Trelassara, Moon Dancer because mangling that bit to mention Ajani’s Pridemate would have been a nightmare) I don’t actually know anything about Drizzt Do’Urden’s lore, nor that of his big cat with an unpronounceable name (this coming from someone who learned how to pronounce Asmoranomardicadaistinaculdacar for the fun of it), but the card itself is powerful and pretty straightforward. He’s a double striking commander, meaning he likes getting bigger, and he’s got an inbuilt way to do so, growing to match the power of anything else that dies. Notably, this includes your opponent’s creatures, but relying on them to do all the work is a poor choice.

This deck includes a selection of what I like to call lean beef- that is, dudes that are a big chunk larger than their mana cost implies. Relic Golem and Nessian Boar are massive guys all the time, while cards like Froghemoth and Spirit of the Aldergard get bigger and better as the game goes on. Where the strength in Drizzt Do’Urden lies is in the ability to just hurl these threats out, and even if they are answered, that just makes him all the more scary. Notably, he only triggers when they die- as such, I’ve included the two instant-speed sacrifice outlets available in the pool. They’re not ideal, but they’ll get the job done in case someone decides to exile or mind control your Vorinclex, Monstrous Raider. In case our fine young bodybuilders just aren’t good enough, we’ve got a couple ways to seriously increase their firepower. Both Choose Your Weapon and Exponential Growth turn creatures into must-answer threats, and Drizzt’s ability to grow to the occasion means their temporary boon can end up a lot more permanent. Hand of Vecna and Hydra’s Growth get their power from the hand and out of hand in fairly efficient fashions, making them perfect for this deck- and the Hand can even be moved over to Drizzt once the thing holding it has an unfortunate accident.

I’d like to bring a special shoutout to Halvar, God of Battle’s synergy in this deck. While giving Drizzt double strike is, of course, pretty redundant, other creatures in the deck definitely appreciate it. Additionally, Sword of the Realms is just an excellent piece of metal, both empowering our “duders” and bringing them back when they cark it. But the point I want to highlight is its synergy with, of all things, Colossification. The ability to give a creature +20/+20 is obviously huge in this deck, but Halvar moving auras around gets around this 7-drops immediate downside, letting you attack for massive damage out of nowhere. Even with just these two and Drizzt- if you have nothing else out, put it on Drizzt and move it to Guenhywvar to attack with a 24/21 trampler, and if you have trample on Drizzt himself, then you can just flat-out kill someone through almost any number of blockers, let alone Flying.

Speaking of evasion, the options for Flying and similar abilities are relatively limited in this format, so while we have a few boots and wings (and one very special Broodmoth), most of it is in the form of trample. Setessan Training and Rune of Might both give the ability along with a power bump for very little mana and 0 cards, and I think Titanoth Rex might secretly be one of the best cards in the deck. Either it’s a card-neutral, instant speed trample giver, or it’s a creature that dies and makes your commander one-hit lethal. There is, of course, the usual Shadowspear, and Maul of the Skyclaves seems just like a really solid card, but I’m here to talk about the fun jank and synergy, not the good cards.

The final point I’d like to bring up (who wants to read me talking about draw, ramp, and removal? Anybody?) is how we protect our Drow dude from removal. While only one Hexproof-granting equipment is in the format currently (Mirror Shield is far from ideal, but still probably worth it here), we have a bunch of other powerful options, including ol’ reliable, Heroic Intervention. There are a couple new cards I’d like to highlight, though-Guardian of Faith protects the whole board from wipes and targeted removal alike while maintaining our augmentations, making them a pretty potent protective piece, and Wild Shape fits extremely well into what our deck is trying to do. In a pinch, it can give trample, but more importantly, it can give Drizzt hexproof while also shrinking him so he gets two extra +1/+1 counters should an untimely event occur. He will also gain reach, which is relevant a surprising amount of the time.

That’s all I have to say about this list. Drizzt Do’Urden is a commander that obviously would benefit from lots of older cards, like Phyrexian Dreadnought, but I’m confident that what we have available in the standard format is enough to make him work. Worst case, you can go play him in Brawl. Do people still play that format?

Unfortunately we had someone drop out last minute, luckily, Mike (you may know him from his last appearance on this article series, or on his own here on Commander’s Herald) has stepped in and offered up a decklist and a little explanation about it! Take it away Mike!

I found all the Venture into the Dungeon cards I could find and started from there with a list of eligible equipment and auras. Once I hit that baseline, I realized that there aren't very many venture cards in these colors. If this was Esper, it'd be another story. So, I dipped into another one of my favorite strategies, blink, and partnered it with a strategy I hope sees more support, self-bounce (looking at you Grazilaxx, Illithid Scholar).

A couple of creatures care about how many cards are in your hand. Mordenkainen's dogs can snap at opponents for hand size and with all the draw and self-bounce, you should be able to slap folks around with this deck. A quick couple of goldfishing sessions proved to me that doubling up on room triggers of dungeons is pretty powerful. Hama Pashar, Ruin Seeker is amazing and I hope there's more venture to come.

Short and sweet; thanks so much, Mike!

Finally we have, well, me! I think it’s about time that I jump in the fray and tackle one of these challenges myself!

Immediately I wanted to explore what I could do with my favorite creature of the set, Old Gnawbone. The ultimate goal of the deck is to get as much damage on the opponent, triggering Old Gnawbone and gaining treasures, which then you use to play more big creatures, and repeat! Trample is probably the most important keyword in the deck, just to make sure we get that damage through and gain those treasures, so Nylea’s Forerunner and Garruk’s Uprising are vital. Toski, Bearer of Secrets and Keeper of Fables increase our rewards with card draw, because the worst thing is to have all of those treasures with nothing to spend them on. Addressing the part of the challenge where there had to be at least 10 auras/equipment, I decided to take a more aura focused approach and played as many as I can, using them to enchant our biggest baddies and bombastically bombard our opponent! The one equipment I will point out is an innocuous uncommon in Leather Armor. A simple equipment, but gives whatever we attach to a little bit more protection than it had before. Making this deck made me realize how incredibly strong and deep the standard-legal green cards are, with cards like The Great Henge, Questing Beast and Vorinclex, Monstrous Raider, to name a few.

Throwing in all the relevant Planeswalkers adds some definite punch to this deck. Vivien, Monsters Advocate gives access to the top of the library to play more creatures and if there are enough treasures, can churn out a lot in one turn. Both Garruk’s are in there to add more bodies to get in for more treasures. Garruk, Savage Heralds ultimate allows the team to get in there and not worry about blocks from the opponent. Ugin, the Spirit Dragon is just, well, Ugin the Spirit Dragon.

Now what to do with all that mana? You might be asking yourself. Fear not, on a turn where the board has just been wiped and there's nothing left but a hoard of treasures, seems like a Long Rest is sorely needed to recoup. Ecological Appreciation is, I think, green’s take on Fact or Fiction. Getting your best four creatures from your deck and getting the two “worst” ones is a good feeling, better still, Ecological Restoration also takes from the graveyard!

All in all this deck is very green, in that it tries to stomp your opponent to the ground with big, silly creatures. Treasures add a neat component to the deck, giving you mana that can be cashed in later for explosive turns. I thoroughly enjoyed building this, and I hope you enjoyed reading it!

Now that you have seen the adventurers and their The Deck of Many Things, it's time to vote! Were the decks you saw today a critical hit? Or did they not quite get there and failed their save? You decide in the poll and let us know what you thought of the decks or what you would’ve done with the challenges down below! Remember, if you don’t love it, CUT it!

If you or a friend would like to participate in a future CUT article, feel free to email the.only.travis.stanley@gmail.com.