Here we are… “the defeated” have almost turned into “the victorious”, and two deckbuilders have made it to the finals for the first time! Through creativity, lovely wordplay, and your wonderful votes, these fantastic deck creators have achieved something only a limited number of folk have. That is a chance at eternal glory, at bragging rights with their playgroups, that yes, they have won a small, vote-based, Magic: the Gathering deckbuilding competition, and really, what’s better than that? Before we can crown a winner, we need to see what they’re offering us this round to prove that they deserve to come out on top!

The two finalists we have today are… 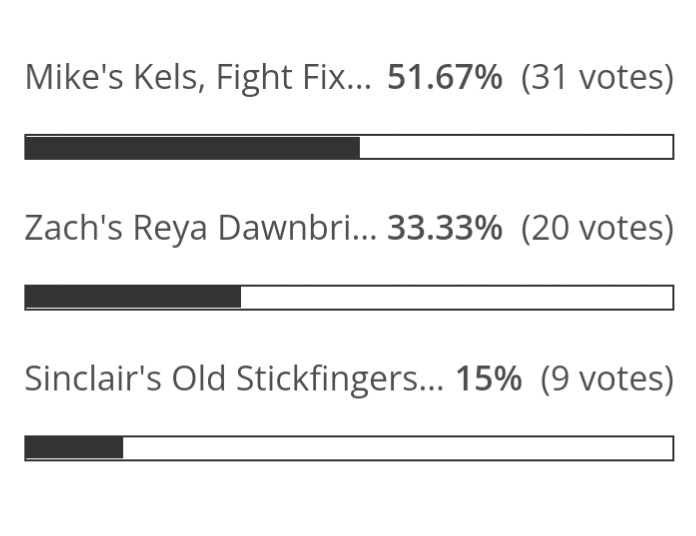 Congratulations to Mike and Zachary!

It never feels good to be the odd person out, especially since this round was full of the “odd person out”. But, hey! You just gotta try, try again, and you’ll get there someday through hard work, determination, and just building more decks! Thank you to Sinclair and his wonderful submission of his Old Stickfingers deck. Writing about Old Stickfingers, right under the 500 mark, was an interesting pick because now, at the time of writing, our tree buddy is almost at 600 decks! Seems that our spooky friend is getting more and more popular as time goes on, so great pick!

Now on to our main event!

The challenges our finalists had to face were:

First up is Mike! Let’s see what he has up for us this time!

Shirei, Shizo’s Caretaker, Kalain, Reclusive Painter and Lyzolda, the Blood Witch are actullay the secret commanders of this deck.

The gameplan is to make a ton of Treasure tokens and creature tokens and sacrifice them to Tymaret, the Murder King and Lyzolda, the Blood Witch to deal some damage and draw some cards. Then, you can use reanimation creatures, like Apprentice Necromancer, and get Shirei, Shizo’s Caretaker to bring a bunch of the 1/X creatures back out or make use of Tortured Existence or Phyrexian Reclamation. Overeager Apprentice with Shirei when you can bring Tymaret back to your hand a bunch of ways is interesting. There are lots of ways to deal direct damage in this deck.

This deck is a graveyard dance, and frankly, it makes me feel excited.

I’ve had a Lyzolda, the Blood Witch deck for a long time. It’s a pet deck of mine, and for a long time, Tymaret, the Murder King and Lyzolda fought for the commander’s seat. Lyzolda ended up winning out, but I never forgot how badly I wanted Tymaret to work. So having a CUT! round two come around, looking at EDHREC’s less-than-250-deck commanders, I spotted Tymaret and knew I had to. Someday, Triad of Fates will get the deck I’ve always wanted to give them. That said, I’ve just ordered a foil Tymaret, the Murder King because the King will get his throne and head his own deck in my collection. Given the rarity restrictions, there were some creative changes made, but I will say, this version is pretty fun.

Shirei with Morbid Opportunist? Divine. This deck has a lot of elements of Rakdos I love to play with. Stealing creatures (Captivating Crew), sacrificing creatures (so many cards), draining the table (with Zulaport Cutthroat, for example), making things when creatures die, reanimation, and, to top it off, it’s lead by a commander that makes people go, “Huh. The art is sick, but I’ve never seen anybody really make him work.” Well, I hope I make you feel like I did make him work.

I finalized my list at 2AM before needing to send it in to Travis. I don’t know that my brain can get out what I need to to make it sound compelling, so straight up, let me just say this: PLAYTEST THIS BAD BOY IN MOXFIELD, IT’S VERY FUN!

Thanks, Mike, and we love you, too! Thanks for always bringing us another take on aristocrats and bringing to our attention that there are lots of commanders out there just looking for a little bit of love to make them shine! If you haven’t already go and check out Mike’s articles here on Commander’s Herald!

Lastly we have Zachary! What did he bring to the table this time?

As part of the challenge for this article, I had to include at least 20 cards from my past decks in this series. For context, my decks were mono-green and mono-white. So naturally, I decided to go with a Selesnya leader. The commander I settled on not only is Gabriel Angelfire. Most of you likely have never heard of this card, and glancing at the card probably makes it look pretty underpowered. Like, what? It’s a seven-mana-value creature that needs to wait a turn rotation before it actually does anything? On top of that, what is Rampage anyways? Well, Rampage is a keyword introduced in Legends block that has seen very little use. What it does is that, for each creature blocking the creature with Rampage beyond the first, the creature with Rampage get +X/+X until end of turn, where X is the Rampage value. So, if 3 creatures block Gabriel, it will get +6/+6.

Okay, so that’s all well and good, but why would someone block Gabriel with more than one creature in that case? Easy. They wouldn’t. Not by their own choice anyways. But what if they were forced to block our Angel friend with all their creatures? Introducing Lure effects! Cards like the titular Lure, Roar of Challenge, or even creatures like Noble Quarry and Shinen of Life’s Roar force our opponent to put everything in front of Gabriel for maximum rampage potential. are enchantments

Normally, getting out a seven-mana commander consistently would be tricky. However, with the help of a LOT of ramp, we can consistently get Gabriel out by turn 5 on average, and ready to start the Rampage on turn 6. Importantly, haste-enablers don’t do much here, as Gabriel’s ability triggers at our upkeep, so we do have to keep it around for a turn cycle. In order to accomplish this, we’ve got plenty of protection and disruption. Rebuff the Wicked, Bastion Protector, and Mirror Shield just to name a few.

If we get Gabriel to stick around to our next upkeep where we can then choose Rampage 3, we need to make sure that an opponent has creatures to block with. That’s why we’re playing Jangling Automaton, to untap our target’s creatures to make sure they’re ready to block, Mercy Killing, to eliminate a big threat while also giving someone a lot of fodder for us to run over, and Hunted Troll, an easy way to get an extra 4 rampage triggers.

Now, Gabriel is big. What do we do with it? The obvious answer would be to give them a trample effect like Unflinching Courage, Loxodon Warhammer, or Dragon Fangs, the former two also giving lifelink, with the latter being able to enchant Gabriel from the graveyard. Triumph of the Hordes also gives trample, though the infect it grants is probably going to ruin your opponent’s day more. Alternatively, you can just draw a bunch of cards with Return of the Wildspeaker or Greater Good.

You may have noticed that a lot of our strategy revolves around enchantments. So much so, in fact, that I decided to dedicate half of the rare/mythic spots in this decklist to enchantress effects. Not to mention a couple at lower rarity as well.

Gabriel Angelfire is another strange commander with an extremely unique strategy you will never see anywhere else, and I love this deck for that very reason.

Thanks, Zachary! Another commander that gives a person pause and definitely interesting to build around! The commanders you have brought to our attention have been big creatures to get out, but once you do, it seems the decks always kick into high gear. Here’s hoping that your angelic entries get you to the top!

Our former last-placers are chasing that first place dream, and their destinies are in your hands! Make sure to vote below for who you think made the best deck or deserves redemption from coming last in their respective round. Pick your choice below and remember if you don’t love it, CUT it!

If you or anyone you know, or if you have some challenges you would like to see on CUT please email the.only.travis.stanley@gmail.com.