We're not going to violate that understanding here. I'm just going to get that out of the way right here at the top. But moving past that, I'm sure you've got questions, the foremost likely being "What the hell are you talking about?"

Welcome, reader, to the first in what will be an intermittent series on Commander's Herald called Harmonizing. The concept is simple : we take a beloved album, spend roughly six hours on Scryfall and EDHREC digging through the perfect card to represent a throwaway lyric perfectly, realize when we look up said lyric that we've been mishearing it for 20 years, go find a different card, and voila. Baby, we've got a column going.

Now, I acknowledge that the primary conceit of the series is deeply personal. I'm considered by polite company to be somewhat of a music "snob," which may come with the territory of being a musician. I'm okay with this, because I know that music tastes are purely subjective opinion, and that my opinion is true indisputable fact.

I'm joking*, of course, but beyond my love of Magic, a close runner-up is music. So, here we are, trying to mash the two together. We're going to build a deck, from the commander to the 99, based solely on a musical album, and believe me when I tell you that it's not easy, and harder still when you're me and insist on choosing a criminally underrated and largely overlooked heavy metal classic from 1983, Crystal Logic. Before we get into the nitty-gritty, let's get to know Manilla Road. 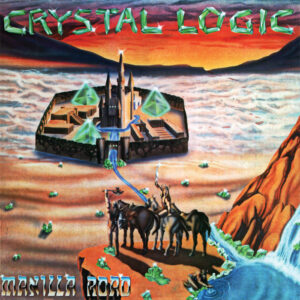 Manilla Road began as many mid-70s heavy metal bands did: in between cans of beer and conversations about wizards. Formed in Wichita, Kansas by guitarist/vocalist Mark "The Shark" Shelton, Manilla Road is considered to be a lesser-known but still significantly influential progenitor of what would evolve into the 80s metal we all know and love. It helps that on early releases, like Crystal Logic, Shelton's voice sounds like a Nazgûl on karaoke night, and also did you look at that album art?

The reason we're going with Crystal Logic as the first selection in Harmonizingis pretty clear if you take a listen to the lyrics. I saw the band at The Majestic in 2017, and even then, packed shoulder-to-shoulder with 300 slightly varied clones of myself (people who go to a Manilla Road concert tend to be a certain type, that type being the sort of people who single-handedly keep the beard balm and denim vest industries in business), I knew it was the auditory analogue to Magic, especially early Magic.

The album opens on a Prologue of ominous strings and war drums, an apt table setting for a game of Magic -- which is, in case we've lost the plot in recent years, a tale of battling wizards. Shortly thereafter, we hear a dark voice, one part demonic and one part 12-year-old kid trying to sound like Darth Vader, mention "the lost city of the dead...Necropolis."

One would be forgiven, when taking the album at face value, to assume it's another in a never-ending line of proto-metal lyrics told from the perspective of some evil presence. But that's not what Crystal Logic is.

Which brings us to Ith.

Lord Ith was the head wizard in the Conclave of Mages and likely most famous in the annals of Magic for being the guy with the maze that annoys Voltron players. He is also known for getting stuck in a magical cage inside the earth, slowly going insane from isolation. Eventually, he was saved from the cage by Jodah and went on a Goblin-killing rampage, because early Magic stories are amazing.

We're building around Ith, because in the context of Crystal Logic, he's the perfect embodiment of the protagonist of the album. Ith's a good guy, and throughout the lyrics of Crystal Logic, we're privy to a tale of a fantasy world told from the position of a pure-hearted adventurer who seeks to rid the world of evil with the use of -- you guessed it -- logic. And sure, in the context of today's real world, the idea of a crusading hero defeating "evil" with "logic" doesn't exactly sit well, but we have to remember that things were different in 1983 fantasyland.

Ith, as a card, is a seven-mana 3/5 that temporarily neutralizes a single attacker by purposely giving them terrible directions. He's not exactly a go-to for his Azorius color combination among Commander players, which explains why he's only got 34 decks listed on EDHREC. But if you're looking for a discount, you can also Suspend him (as you might, say, in a cage hanging from the ceiling of a cave) for only UW, then wait four turns. Ith gets a bum rap, mainly because he's what most Magic players call "garbage," but when we imagine him as the protagonist of a sweet 80s metal album, he gets a little better.

As our Crystal Logic commander, Ith's about to head off on a quest, starting with the album's first, and best, song, "Necropolis."

Ith's lost in the City of the Dead, which makes sense since he has a penchant for getting captured. In our deck, we're going to represent this in a number of ways. It can be argued that Necropolis is a sort of Ghostly Prison, but who's to say the City of the Dead is terrestrial? Perhaps Ith's found himself Imprisoned in the Moon.

Magic, in the context of Magic, always seems to be a concept that is simultaneously inscrutable and ubiquitous. We'll represent Ith's quest to unravel the mysteries of magic with Mystical Tutor, Brainstorm, Ancestral Vision, and Ponder. But he's also not that great at it, and often will Muddle the Mixtures of his arcane concoctions. And since he relies so much on logic, it stands to reason that he's skilled at knowing what's Fact or Fiction.

Here's where Ith takes a detour into benthic bewilderment, seeking some sort of magical mermaid trident. Sound familiar? We'll represent that here with Bident of Thassa, because the other option would be Surestrike Trident, and I can't get myself to recommend that even for a largely theoretical theme deck. We can also assume that in the depths of Necropolis, deep within these Atlantean crypts, Ith's made new fishy friends in Lord of Atlantis, Svyelun of Sea and Sky, Master of the Pearl Trident, Merrow Reejerey, Merfolk Sovereign, Stonybrook Banneret, Deeproot Waters, and Seafloor Oracle. And also Surgespanner, which is important.

Moving on to the album's title track, "Crystal Logic," we really get to the root of what makes Ith tick.

God's Magik shines so bright with Sword of Fire and Light
The madness never can win
If thee be pure of mind never give up the fight
And thou shall not burn in sin
I'm not burning, look inside
Crystal Logic's what you'll find

Channeling magic through a mystical sword might be better handled by one of Ith's moist mer-friends, which is fine. We don't have a "Sword of Fire and Light" in Magic (yet) but we do have a Sword of Fire and Ice, as well as a Sword of Light and Shadow. Maybe he can just go enchanted-sword-akimbo. And there's something to be said about being "pure of mind" to defeat "madness," which sounds right up Ith's alley. He's got nothing but Pure Intentions as he attempts to Clear the Mind of iniquity, fighting off the Flood of evil as he returns from his Otherworldly Journey. And while he's "not burning," he might have developed a Twitch as he Twiddles absentmindedly, focused only on a sick solo.

It could be a Distant Melody, but an Entrancing Melody the same, that Ith hums to Vanquish the Horde of evil at his doorstep. Ith's song is a Glorious Anthem that serves as a Guiding Spirit for Ith and his wet friends. He's a Songstitcher, whose words are a Spectral Shield.

But Ith's not satisfied with coming up with magical lyrics to fight bad guys with. He has to apply his logic skills in order to defeat "The Riddle Master."

Strange I was chosen, the fool divine
To battle the master
Of riddle and rhyme
Another mountain
For me to climb
I must find the answer
Before I run out of time

Nowhere do they say the Riddle Master has to be a boring human. Maybe Ith's been challenged by the Riddlemaster Sphinx. Either way, he's got to use logic to solve the riddle before he learns a Tragic Lesson in time management. It'll take a Clash of Wills, and he may suffer a Fool's Demise, before he runs Out of Time.

And the answer to the riddle? Well, we're talking 80s fantasy lyrics, so I'll give you guesses three.

Ith, like anyone, seeks only to be Freed from the Real. But you can't live in fantasyland forever. Eventually you have to take your petty notions and Dismiss into Dream the idea that you can Alter Reality with a thought. Ith learns this in his battle with the Riddle Master, that a Mind Unbound to the waking world can cause Reality Ripples, strengthening a Dream's Grip.

After Ith out-logicks the Riddle Master, he's off to his next challenge -- slaying a serpent with the help of his trusty steed, which happens to be a very observant sheep, as told by the track "The Ram."

When mount shopping, Ith's really only got two choices here, and one of them doesn't seem big enough to ride, so he'll strap his saddle to the Rustspore Ram and hope the thing doesn't accidentally step on one of his magical swords from before.

Speaking of armament, Ith's once again taking up arms and calling upon his aquatic allies to help fight off that nebulous evil that seems so persistent, as we learn in "The Veils of Negative Existence."

He's added another element to his mall-ninja blade collection, this time lightning; however, with few options and a little revisionist history, Ith will strap on some Lightning Greaves instead. But he's still taking to the Ominous Seas to deliver a Banishing Light in the darkness. Then again, maybe Ith is just King Arthur in a cage?

On Prydwen, my longship
Of silver sails
Excalibur at my side
We shall not fail

We'll wrap up Ith's journey with a little doomsday foretelling, in "Dreams of Eschaton." 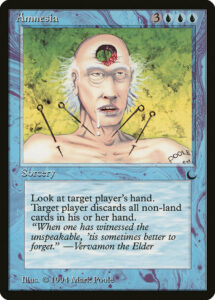 Ith knows a thing or two about apocalypse, having lived mostly in the time after Urza and Mishra nuked Dominaria during the Brothers' War (which I assume we'll learn much more about later this year). He's no stranger to a Dark Age, what with him first mentioned in The Dark. Unless he's a victim of some Amnesia, of course. It's not hard to Predict the times ahead when your world is on a collision course with disaster, and a little Future Sight is all it takes to know Ith'll be keen to do what he can to avert annihilation.

Poor Ith can't catch a break. Even when he devotes his post-cage life to destroying evil in all its forms, a simple Declaration in Stone from on high is all it takes. It's hard to avoid the Wrath of God, after all.

There you have it -- Ith, Lord Arcanist by way of Crystal Logic by Manilla Road. Do you have any suggestions for the next installment of Harmonizing? What's a great album that could make for a solidly weird Commander deck? Or, conversely, what's a current legendary creature that needs its own anthem? Hit me with some recommendations and I'll see what I can do.

We'll talk soon, and in the meantime, stay out of Necropolis.