The Titan and the Seer

Few characters in Magic's history are as immediately recognizable as Urza.

The kudzu of unruly hair, sometimes blond and sometimes white, matched by a tuft on the chin. The flowing robes, often blue with purple, sometimes adorned with plate armor should the situation call for it. And of course, the heterochromatic glowing eyes of the Mightstone and Weakstone.

With The Brothers' War on the horizon, we've got more Urza than ever before, and the iconic look of the planeswalker has been a uniting thread that has carried over decades of worldbuilding. Urza's first mention in Magic lore was with its first release, Alpha -- or, more specifically, his glasses and sunglasses. 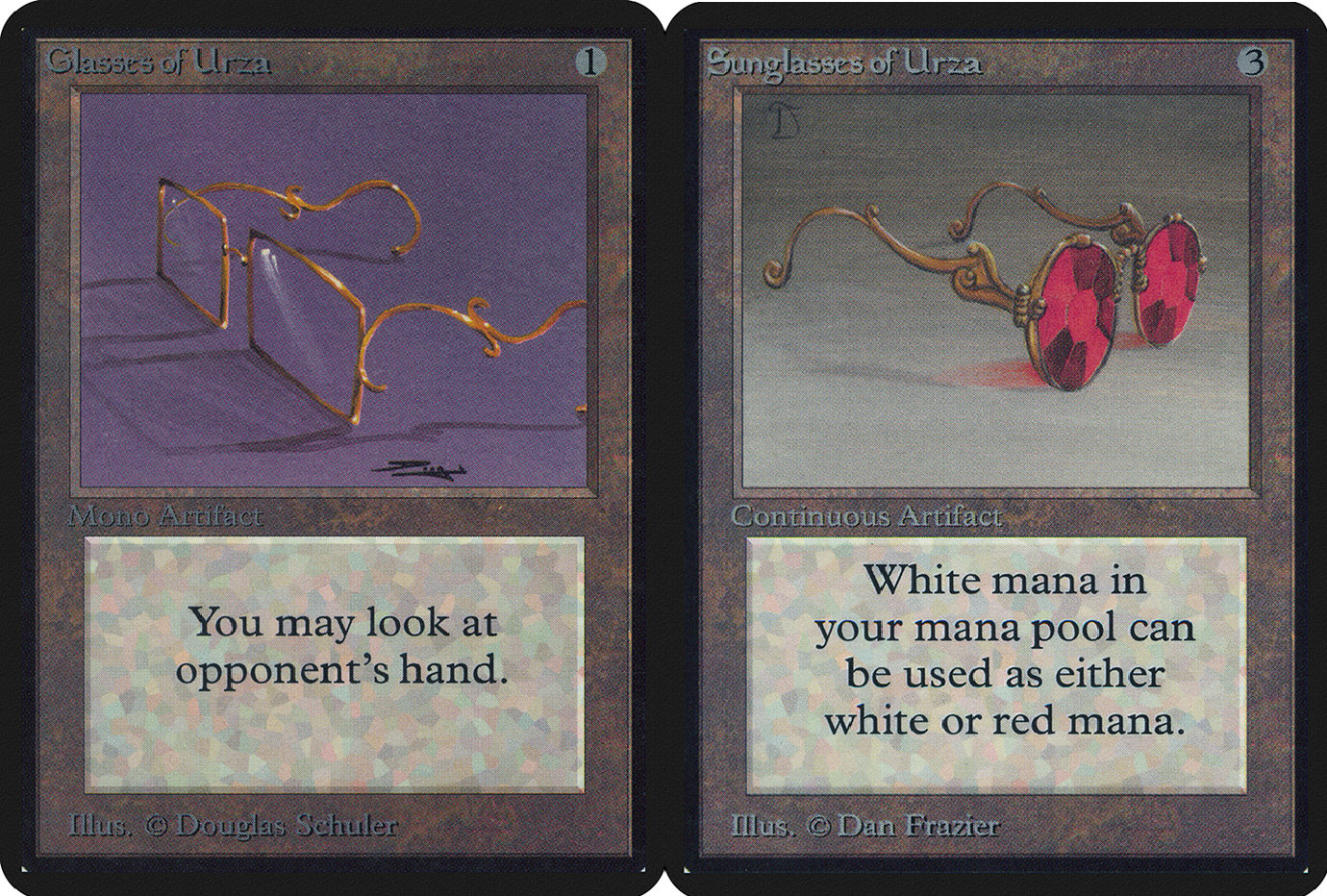 From there, Urza sees plenty of mention throughout Antiquities on flavor text, from Amulet of Kroog to Clay Statue to Onulet and Rakalite. But we don't see the man himself on a card until his appearance in Vanguard: 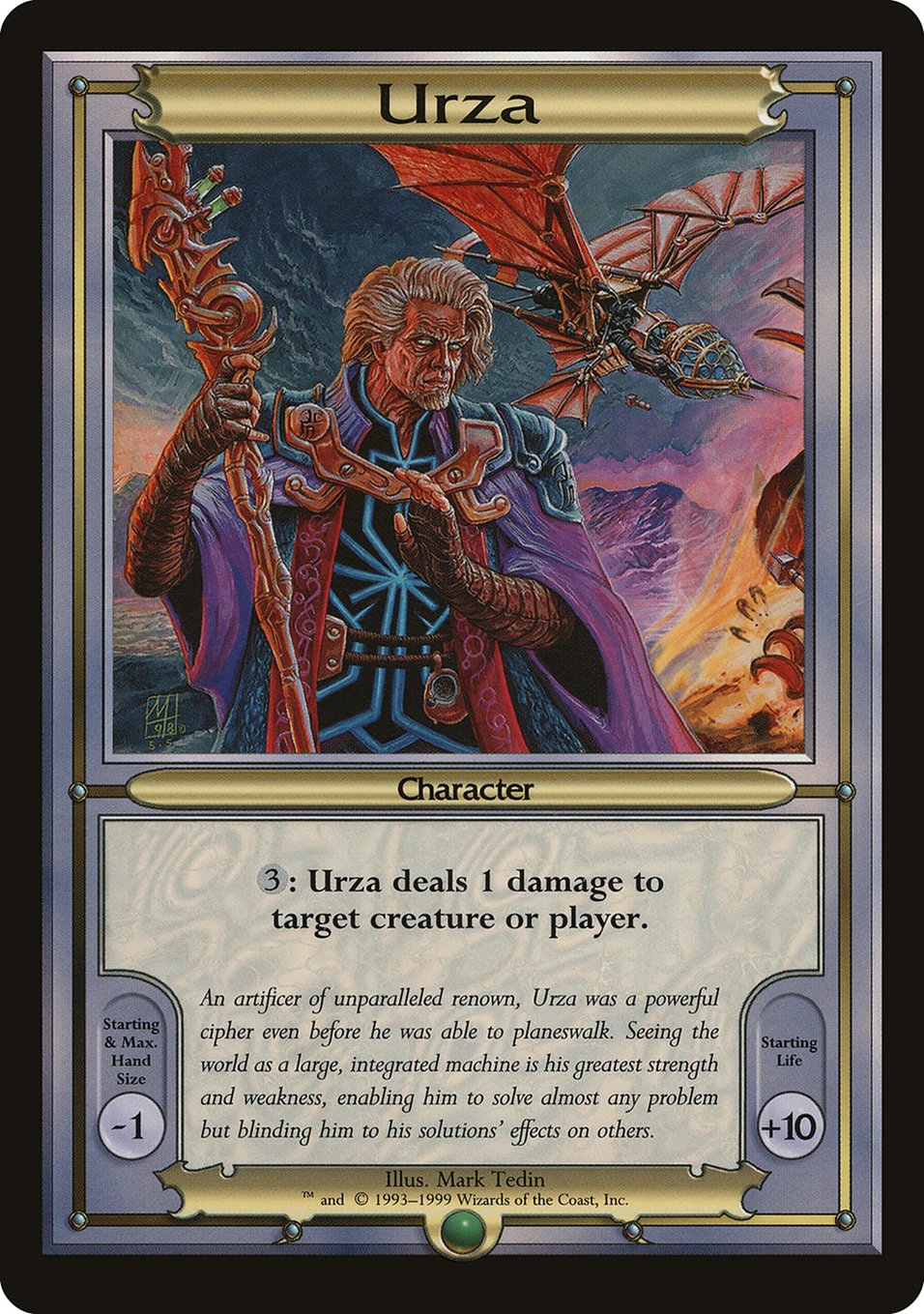 That was 1997, or 25 years ago. And with the new interpretations of the character debuting in Brothers' War, not much has changed in that time.

Around 2008, New-England-based Ryan Pancoast was tapped to create his first Magic illustration, which debuted a year later as Convincing Mirage in Magic 2010. He's been busy since then, creating the images for more than 150 cards in the intervening 13 years, but it wasn't until 2017 that he was provided the opportunity to depict a legendary creature. That first crack at a named character would become the namesake of the Azorius Senate himself: Azor, the Lawbringer from Rivals of Ixalan. "Since then, I've been very fortunate to illustrate some major characters in Magic lore, but Urza, Planeswalker was the highest-stakes commission I've ever painted," he said.

With the return of the Meld keyword, it was a much more complicated task for Pancoast to create art: instead of one image for one card, Pancoast was asked to provide art for three distinct elements, one each for the face of Urza, Lord Protector and The Mightstone and Weakstone, and another for Urza, Planeswalker, the result of the former two cards' combination. Pancoast was unable to share specifics on the art direction provided for him, but said Urza, Planeswalker shows Urza in the aftermath of a large explosion. "Presumably after the detonation of the Golgothian Sylex," he said. "The last moments of the explosion close behind Urza, and the Mightstone and Weakstone are now his eyes."

Pancoast said he knows, "a lot of people think I used myself as a model" for Urza -- which is true, he said, "but not the main model."

Pancoast hired a model to pose for Urza, a common practice. "As I do with most character illustrations, I tried hard to find a model that looked the most like the fictional character," he said. "And like 90% of all my jobs, I used myself to get the pose more accurate."

He also enlisted the help of Jaime Lannister... or at least, an eight-inch-tall figurine of the Kingslayer. "I made an outfit for Jaime Lannister to get some ideas for lighting and color on the costume," he said. "A lot of my reference is me thinking, 'I may need this, I should probably try it.'"

When it came to do the art for The Mightstone and Weakstone, the glowing orbs created their own set of challenges, and Pancoast had to get creative to find solutions. He ordered a pair of "fake gems" to act as stand-ins for the mythical stones and crafted a "crater" from paper-mâché. "I didn't really use most of these reference shots, but I wanted to try it," he said. "I could have used a 3D program, but who has time to learn Blender?" Similarly, for the illustration of Urza, Lord Protector, Pancoast pulled reference material from a number of disparate sources -- from photos of crab fishermen to the poster for the movie Dunkirk.

But much of the "visual information" of Urza, Lord Protector, he said, "came from my model, and myself in a bathrobe holding a salad bowl."

It was that that salad bowl that almost broke canon, Pancoast said. "In the end, that salad bowl messed me up," he said. "I forgot my sketch and made the Golgothian Sylex too small in the painting." He credited art director Taylor Ingvarsson for catching the mistake, and Pancoast increased the size of the sylex/salad bowl digitally. Altogether, said Pancoast, the trio of images represents "a month of intense painting and planning, knowing it would be the most important job I've ever done for Wizards."

Both Urza, Lord Protector and The Mightstone and Weakstone measure 18" by 24", while Urza, Planeswalker is 30" by 40".  Over the course of a month, Pancoast said he started with thumbnail sketches in his sketchbook. From there, he submitted two to three digital sketches to his art director before setting out to gather many of the reference images seen here. After that he was ready to commit the final drawing onto the canvases for each work before painting.

Head to Pancoast's website for the opportunity to purchase artist proofs as well as original art, prints and more.