For thousands of fans of both Dungeons & Dragons and Magic: the Gathering, the Rulebook Showcases in Adventures in the Forgotten Realms and now Commander Legends: Battle for Baldur's Gate represent a unique, nostalgia-tinged treatment of select cards. But for Phil Stone, they represent a second chance at a dream.

Stone's been a lot of things in life. He's a father and husband. He was an international hair artist for more than a decade. He owned a local game store. He's an avid skateboarder, even now into his middle age. And now, he's a professional artist working with a number of publishing companies. It's that last occupation that's always persisted, however: the goal to become a professional artist has been lingering in the back of his mind for much of his life, he said, and his first attempt at it made for some lifelong "horrifying" stories.

In the early '90s, Stone first decided on a career in fantasy art. He was able to secure a gig, but there was a catch: he was in Michigan, and the job was in California. So he rented a U-Haul, "And with my last dollar, went to California to work on comics in San Diego." Stone said it wasn't long after he arrived that he discovered the job wasn't what he expected it to be, and the man who hired him wasn't exactly the best role model.

Born and raised in southeast Michigan, Stone said he started applying "with no direction whatsoever" to open art gigs as an ambitious 20-something in 1991. "I had no art classes, no idea how to put together a portfolio," he said. Working in a comic book store in high school, Stone was enamored with the art he'd see on a daily basis, and by chance discovered that an artist working for Marvel at the time happened to live nearby. Being the '90s, Stone looked him up in a phone book and gave him a call "in the middle of the night."

To Stone's surprise, the artist answered and offered to review Stone's work. "He told me I was trash," Stone joked. Even with his life's ups and downs, Stone's self-deprecating humor is evident. 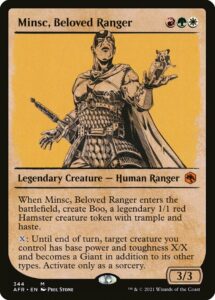 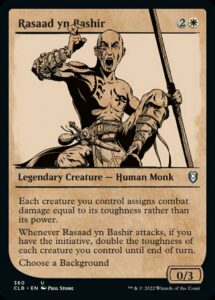 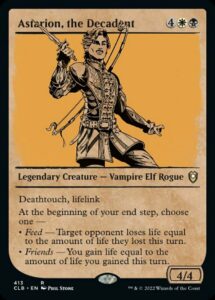 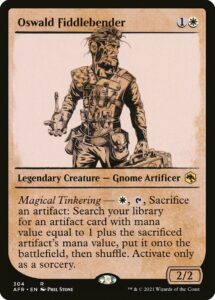 Phil Stone's art is currently adorning 19 cards, all Rulebook Showcase treatments from both D&D sets, eight from Adventures in the Forgotten Realms and 11 from Baldur's Gate. He's also got more on the way in upcoming sets.

Stone said working with Wizards of the Coast has been life-changing, but the relationship started inauspiciously. "I didn't apply to them, they found me," he said. "I got an email from (Wizards Senior Art Director) Tom Jenkot and I thought 'who the f*** is this?'" When that email came, Stone was working for around a dozen small presses, most notably Kobold Press, creating art for a number of RPGs. "First they gave me two cards, then six more," Stone said. "They don't tell you what it's all about; I didn't even know it was for Magic until halfway through."

As a hair artist, Stone traveled the world, crafting coifs for a number of performers. He was on the road for a good chunk of a decade. "That's when Lupus kicked in," he said. "My wife said maybe it's time to try art again; that was four-and-a-half years ago."

It's been a "mental balance," said Stone, as he spends much of his day in solitude, creating art for his numerous clients. As a hair artist, "All I did was talk to people."

Recently, when Stone decided to take a second crack at professional art, he opted to seek out formal training after securing some contacts and regular gigs with small games publishers. "I took art classes three years ago," he said. "I thought I better figure this art stuff quick." He took art classes during the day and drew commissions at night. "I was older than half of my professors," he joked.

He earned a degree in illustration, but as his website states, "his art is fueled by coffee, cigarettes, Pabst Blue Ribbon, and night terrors." Stone said working with Jenkot was an "absolute pleasure," and the man himself is a "super cool cat." Even with the technical education as a foundation to his talent and motivation, the magnitude of the client and project was "scary," Stone said. "You start to question yourself, it's a mental thing, but I never thought I'd get a second chance." 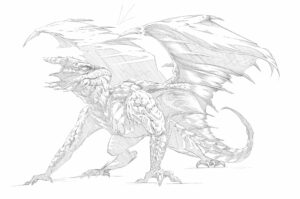 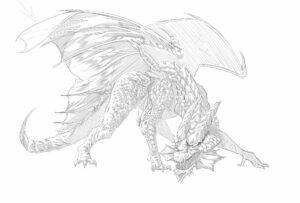 Growing up in rural Michigan in the '80s, Stone was one of "those" kids: into Dungeons & Dragons and fantasy games in the midst of the Satanic Panic. He was an outcast, he said, and didn't fit in. Because of his location, it wasn't very easy finding people with whom to play a dedicated D&D campaign, but he still collected the books. It was the art that kept his attention, he said.

Fast-forwarding to more recent times, when it became evident that his art will be forever associated with D&D, a game he's been enamored with for 40 years. "Dude, I cried, I was ugly crying," he said. "I got to work on the same thing that people who influenced me when I was 10 years old worked on; knowing I'm now in the same (universe as those artists) blew my mind, I just melted."

While he was collecting the books for D&D since he was a pre-teen, his exposure to Magic came a bit later, in 1998. He was living in a rented farmhouse in Armada, Michigan, and "one day, there was a knock at the door," he said. "Some dude was there and said, 'Do you wanna see my knives?' I said, 'Uh, no.' Then he asked if I wanted to play Magic, and I said sure, why not."

Stone said he eventually did see his new friend's knives. "They were very nice," he joked. 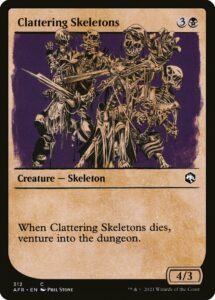 As a primarily digital artist, Stone is able to pack plenty of visual information into art for a Magic card, but in the back of his mind he's got a singular goal: to make it look cool. "I'm a black-and-white guy, and it was a challenge," he said of the Rulebook Showcase art. He said his favorite work to date is the art for Clattering Skeletons. A few all-time favorite artists of his are Bernie Wrightson, "one of my biggest influences," as well as Todd MacFarlane, and a contemporary he's "most jealous of" is fellow Rulebook Showcase artist Justine Jones.

He's been re-energized by the world of fantasy art and "nerddom" at large. One pastime he's enjoyed with his son for years was to head to Motor City Comic-Con, and coming out of the COVID-19 pandemic, he and his son recently returned to discover things have "completely changed" in a positive way. "It's a new demographic, the audience is wider now, it's more accessible and open," he said. "It was a fantastic experience."

Everything that's happened in recent years has solidified his appreciation for being able to make a second career in art. "I'm grateful for all the work I'm getting," he said. "I get to draw my little pictures and if (clients) are calling me back, it's a good day." 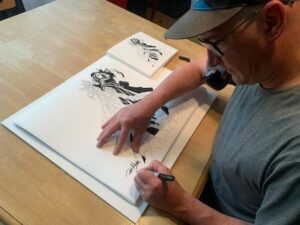 Stone's website features a store where fans can purchase a number of prints and illustrations. After his first round of Magic illustrations were released last year, Stone said he had no idea how to handle the influx of inquiries for prints and artist proofs he was receiving almost daily. That's where Mark Aronowitz came in. Stone credits Aronowitz, his "agent provocateur," for organizing artist proof sketches and print sales, the latter of which are available for any of Stone's 11 illustrations thus far by contacting Aronowitz on Facebook, or visiting the Facebook group "Mark's artist signature service and other elves and goblins."

For those in the southeast Michigan area, Stone will also be making an in-person appearance at Sarge and Red's Toys in Utica on Sunday, June 26.