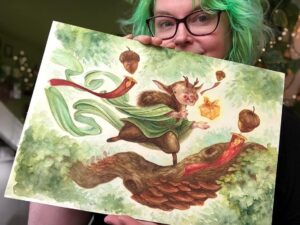 The art of Iris Compiet is the art of fantasy at its most curious.

Compiet's provided the art for 10 Magic: The Gathering cards (and one token), and while her history with the game is more recent, her style is immediately recognizable. Influenced by the fantasy worlds of Dark Crystal, The Labyrinth, Neverending Story, Legend, and Willow, Compiet works in a "little studio" set up in her home in the Netherlands -- a place "full of inspiration, and a true sanctuary," she said.

Compiet recently earned a Chesley Award from the Association of Science Fiction & Fantasy Artists (ASFA) for her work on The Dark Crystal Bestiary: The Definitive Guide to the Creatures of Thra. Written by Adam Cesare, the book earned Compiet the award for Best Interior Illustration. The book was also nominated for another Chesley, for Best Cover: Hardcover Book. Compiet, 42, said winning the award was something she never imagined -- especially for a "dream" project like Dark Crystal. "Knowing the other artists and their work that was nominated, all amazing creations, I didn't think I'd be the one to receive the award," she said. "Having been asked to illustrate the bestiary was such an honor, and I spent many months diving into the world of Thra to try and do it justice and add to that lore." To then receive an award for that work, she said, "...it wasn't just the icing on the cake, it was a cherry on top of a whole bunch of whipped cream, and I'm not ashamed to admit I cried when I heard the news."

For Compiet, who grew up with Jim Henson productions like Dark Crystal playing on repeat, she didn't hesitate to accept the offer to illustrate the book. "The team at Henson and the publisher were great to work with, I was given a lot of freedom," she said. "Obviously the creatures from Thra we already know and love had to be recognizable, but I was given the opportunity and trust to do my thing." Compiet estimated she completed more than 1,000 sketches for the publisher during the development of the book. "I immersed myself in that world and tried to work in a way as if I had been sitting in Thra observing all the creatures in their natural habitat," she said. "It was such fun to do." 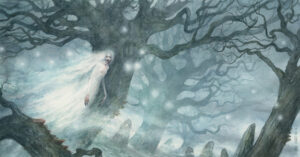 Framing fantasy art in such a way has become somewhat of a theme for Compiet -- fantasy art through the lens of a curious observer who may have wandered unaware into another world. Compiet is the creative force behind Faeries of the Faultlines, a collection of art and writing documenting the Faultlines, an ancient name given to those places where the veil between this world and the Other is thinnest. The compendium was an instant Kickstarter success in 2017 and has since been updated and expanded.

Compiet said the world of Faeries of the Faultlines is her "one big all-encompassing world," and while working on established properties like Dark Crystal or Magic can provide a "push" to get out of her comfort zone, her personal work is just as important, as is finding a balance between the two. She said she "stumbled upon" the world of faeries in 2016, a time when she was just establishing her footing in the art world. "(I was trying) to get jobs and work as a freelance artist, but it just wasn't happening," she said. "I kept bumping into closed doors and started to get more and more frustrated to the point where I just didn't like anything I was doing. My art just wasn't 'me' -- I was trying to hard to fit in and I ended up visually trying to replicate what others were doing."

When she realized she was heading down the wrong path, "something clicked" for her and she decided to stop pursuing a career in the arts, or "chasing likes" on social media. "Instead, I was going to make art I wanted to make, no matter if it was popular, liked, or seen," she said. "I wanted to go back to that place where I was as a child, creating art because I needed to see it in the world."
The moment she decided, she said, that it was "okay not to be a professional working artist," was the moment her career really began in earnest. "And the faeries were the ones making it happen." 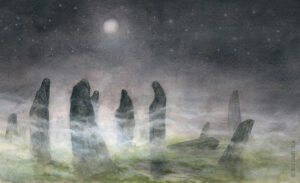 Compiet said around that time in 2016 she started to challenge herself to make daily sketches for art-themed hashtags on Instagram -- "Not perfect drawings, just sketches, and post them with a short story," she said. "And people liked that, apparently." So did she, so she kept going, and at one point was asked by a fan what she planned to do with all those sketches and stories. "And I figured 'why not make a book?'"

Recently, the book has been republished as a "new and expanded edition" by Eye of Newt Books. "And all this has led to working for Dark Crystal, Labyrinth, Magic, Netflix, and so on," she said. "I am currently working on an oracle deck for the Faultlines and have many more ideas and dreams for this world. I'm nowhere near done telling the stories of the Faultlines." 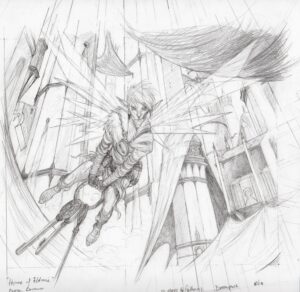 While Compiet's catalog of Magic cards is small at the moment, she's already established herself as a unique voice in the game's art, and that voice will be getting louder as new sets are revealed. "There will me more cards, but when, I don't yet know," she said. "And as long as the wonderful art directors send me commissions, I will continue to paint art for them." Compiet said Magic is "truly" one of her favorite things to work on, and doing so has pushed her out of her comfort zone as well as taught her things about her art. "I've done things I might have never painted for myself, and I'm happy I've been given the opportunity to explore new things," she said. "Working for Magic has made me a better artist for sure."

Compiet said that while she didn't grow up playing the game, she was certainly aware of it, as a fan of fantasy art. She frequently purchased booster packs of the cards to collect the art. And now, she can collect her own. "To now have some cards of my own is just such a wonderful thing, I truly never thought my style would be a fit, but I'm so very grateful the art directors at Magic thought differently and gave me and many of my friends and colleagues an opportunity," she said. Seeing her own work on Magic cards is "such a weird and wonderful experience," she said. "Each time, I pinch myself because it's just so special to see my dream is a reality. I never take it for granted and seeing each new card, book, or other project out 'in the wild' is just an amazing thing."

Until new cards with her art are officially revealed, she couldn't go into specifics, but it's safe to assume they'll continue her trademark ethereal style. Compiet said she prefers working in traditional media, which allows for "a feel and connection" she gets through the physical materials. "I love nothing more than to watch how watercolor pigments dance across the paper when I'm working, or to learn a new technique or to try a new medium," she said. "Nature is obviously a big inspiration for me, and I try to escape to my favorite holiday destinations, Scotland and Dartmoor, as often as possible -- that's where history, folklore, and nature just ooze through the cracks and inspire my art." But getting lost in cities and museums, she said, is another source of inspiration as well. "Anything that gets me out of my comfort zone and gets the imagination flowing." 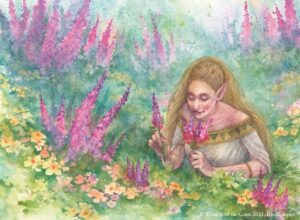 Compiet signs Magic cards through the mail via a signing service operated by Mark Aronowitz, and she said she's working on making signed cards and artist proofs available at her webshop sometime in 2022. She's also got her sights on attending IlluXcon, held in Reading, Pennsylvania, and the World Fantasy Convention in New Orleans as the Guest of Honor, later this year, should world conditions allow.

In the meantime, fans of Compiet's work can connect with her via her Patreon page, where fans can see more of the "behind-the-scenes" of her work and process, including for Magic. 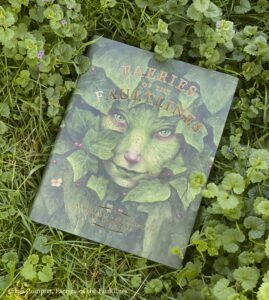