For some, they're an opportunity to gather at a convention center and play a game of Magic with a few thousand new friends. It's a social event. For others, it's the grind, a place to put one's skills to the test against other pro-hopefuls, seeking success and cash. And cash is a prime motivator for another subset of event attendees, who circle event dates on the calendar in order to buy and sell format staples and high-end gems.

But there's another group, myself among them, who head to conventions and events for a singular purpose: the guest artists.

Around a decade ago, I made it my singular mission to collect every legendary creature in Magic. As my format of choice even then was Commander, that goal morphed in 2014 into collecting all commander-eligible cards thanks to the release of the first batch of planeswalker commanders, like Ob Nixilis of the Black Oath and his pals. A few years ago, I had the good fortune to complete that collection, save for a handful of Portal: Three Kingdoms legends and a few extremely costly rarities (although I do have a copy of Rarity). Of course, despite my repeated requests via email that Wizards stop releasing new commanders, they seem to not only ignore me but print them even harder. Thus, I'm locked into acquiring a new batch with every subsequent release, because I'm not a quitter.

However, the approximately 1,300 commander-eligible cards sitting in what is now three binders needed a little spice, so it became my secondary mission to get every single one of the damn things signed by their artists. As you might have guessed, that goal is literally impossible to achieve — several artists have passed away since their cards were printed, and several more do not sign under any circumstances. But the goal has led me through some interesting rabbit holes; for example, if I want to get my copy of Louvaq, the Aberrant signed, I'll be heading to Wizards Senior Art Director Cynthia Sheppard's booth.

The quest for signatures has also led me to conventions. Prior to the pandemic, it became routine to head on the road to whichever Midwest city was hosting a Grand Prix or other event that weekend, sometimes for only a few signatures. But to me, it was worth it.

And with the return of in-person events, I and many like me are once again penciling in event weekends, making lists of attending artists and pulling cards to be signed. As much fun as it is to head to an event, it's also plenty of work, planning routes, lodging, and whatever else comes with travel. But I'm just a fan — I'm going to show up, march to the artist alley with my stack of cards, then turn around and go home. A lot more work goes into attending these events for the artists themselves.

Ken Meyer, Jr.'s first illustrations for the game were five cards in Arabian Nights, perhaps the most famous of which is a certain gorilla that saw plenty of play over the years in Kird Ape.

In total, he's responsible for the art on 14 cards. The most recognizable of which for Commander players is likely Fishstick Study (sometimes referred to as Mystic Remora).

Ken's also a regular sight at in-person events, especially if you find yourself heading to San Diego Comic Con, where he's been a fixture for nearly 25 years. "As far as the Magic-type tourneys, I only started that about seven years or so ago," he said.

Meyer has seen the in-person convention scene change dramatically in those seven years. "Initially, they were run by various people in various areas of the country, until Channel Fireball (CF) took everything over," he said. "Then, after COVID-19, CF was pretty nonexistent, and it went back to various people: Star City Games, TCG-Con, Dreamhack, and various smaller events."

"Frankly," he said, "I like it best the way it is now, it seems to give the artists more options and also more travel expenses covered. In general, all entities have treated us artists pretty darn well."

When it comes to attending events as a guest artist, it takes plenty of forethought and preparation. Meyer said it usually takes several hours to purchase airline tickets and book lodging, ensure he's packed everything he'll need in terms of prints and proofs, and create signage for his booth if needed. But the prep work is worth it, he said. "If I am being totally honest, it has become a big part of my income, so I cannot ignore the financial aspect," he said of attending events. "But, they also helps me get ideas for things since I never learned to play Magic, whether just getting advice or commissions and such."

Meyer said he's "actually somewhat socially withdrawn," so attending events has the added benefit of getting him out of the house and talking to the hundreds of fans who'll visit his booth over the weekend. "Though I am totally drained at the end of each day," he said, "but then again, I am also pretty old."

San Diego Comic Con is a great place to meet established artists as a fan, but if you're an aspiring artist yourself, it's also a great place to network. It was in San Diego where Milivoj Ceran attended his first convention as an artist. "I was without a booth, just me and my portfolio," he said. "But that helped me to get some contacts and start some jobs."

That was in 2006. Since then, the Croatian native has made a name for himself in the fantasy art world, working on projects for World of Warcraft and Hearthstone, Dungeons & Dragons, and of course, Magic: the Gathering. His art debuted with Ixalan, illustrating the tribal staple Vanquisher's Banner, and has since seen his work appear on more than 60 cards.

He's also a staple himself at events, signing cards for fans and offering a collection of artist proofs and prints, and as such he's no stranger to the travel and planning that goes into operating a table in an artists' row. "When I go to (an) event, I must pack everything I need in two big cases," he said. "My whole 'booth' must be inside the weight that goes to the airplane." That's why preparations are important, he said. "All original artworks, prints, signs, brushes, markers, binders with Magic: the Gathering artist proofs...all must fit in that size and weight."

When it comes to heading off to the next convention, while the logistics can be a headache, it's all worth it in the end. Ceran said conventions are often an excuse to catch up with friends and fellow artists, many of whom thanks to schedules and distance can only cross paths at events. Interacting with fans is another highlight. "I like to talk with fans and hear their impression of my art, and what it means to them," he said. "Meeting the fans is always fun and gives me creative energy for future works." Attending a convention as an artist is a way to see the impact the art has on real people, he said, something that is impossible to predict when creating. "Fans show us how important our work is, and since all artists are creating art in isolated bubbles, it is great to have in-person feedback at the conventions," he said.

Ceran's been a professional artist for two decades, but he said he still sees events as a way to network with new industry contacts as well. "You never know who is going to come to your booth, or who you can meet at the afterparty events, that lead to potential new projects and collaborations."

If you've got your heart set on heading to an event this year, you're in luck.

The slate of events around North America and the world is nearly as stacked as it was before the COVID-19 pandemic started in 2020. For many attendees and artists, this year's events will also be the first time they'll be heading to a convention since the pandemic, and for others still it'll be the first time ever. Meyer offered a little advice for those seeking some artist face-time, saying it's often best to request commissions at the beginning of the day. He also recommended that visitors to his or any other artist's booth take the time to read whatever signs are posted. "It seems no matter how many signs I put out, many always ask 'how much is this?'" he said. "Or they don't seem to look up and see my banners with all the mats on them, being too used to looking down at the tables and seeing them (which can be a) big problem at the odd show that only gives me one table."

When it comes to etiquette, Meyer said to be mindful of the little things. "Don't sit your stuff on my products on the table, especially drinks and such," he said. "In general, Magic players are very well-mannered, very supportive, very inclusive, and in general, good people."

Like Meyer, Ceran also provided a bit of advice when it comes to fan interaction. "There's no bad time to get signatures or chat whenever I am at the booth, unless I am in the middle of drawing or painting a commission," he said. "But in that case, I say that I'll be available in 15 or 20 minutes or so." So patience is key, as well as being aware of fellow fans who might be waiting for a chance to make a purchase or commission. "I don't like when someone stays at the booth and talks for half an hour and don't care for other people who are patiently waiting their turn," he said. "Conventions are very busy for me, I am most of the time signing cards or drawing, so time can be very tight." 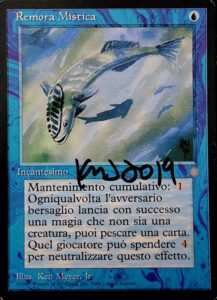 So where are you headed this year? If you need a heads-up on an event that might be upcoming in your area, or need a reminder to book that hotel room (that last one is more for me than anyone, if I'm being honest), then look no further. I've compiled a list of events that will have artists in attendance, and if announced, who those artists will be. And by no means is this list exhaustive — I'm always on the lookout for upcoming events, so if you know of any that you don't see here, let me know and I'll add it to the list.