Double Masters 2 reveals came through like a Lavalanche over the past few weeks, and with the return of many sought-after cards, we also received new full-art treatments from some of Magic: the Gathering's art royalty. As you start cracking those 2X2 packs today, follow along here with some aesthetic background. 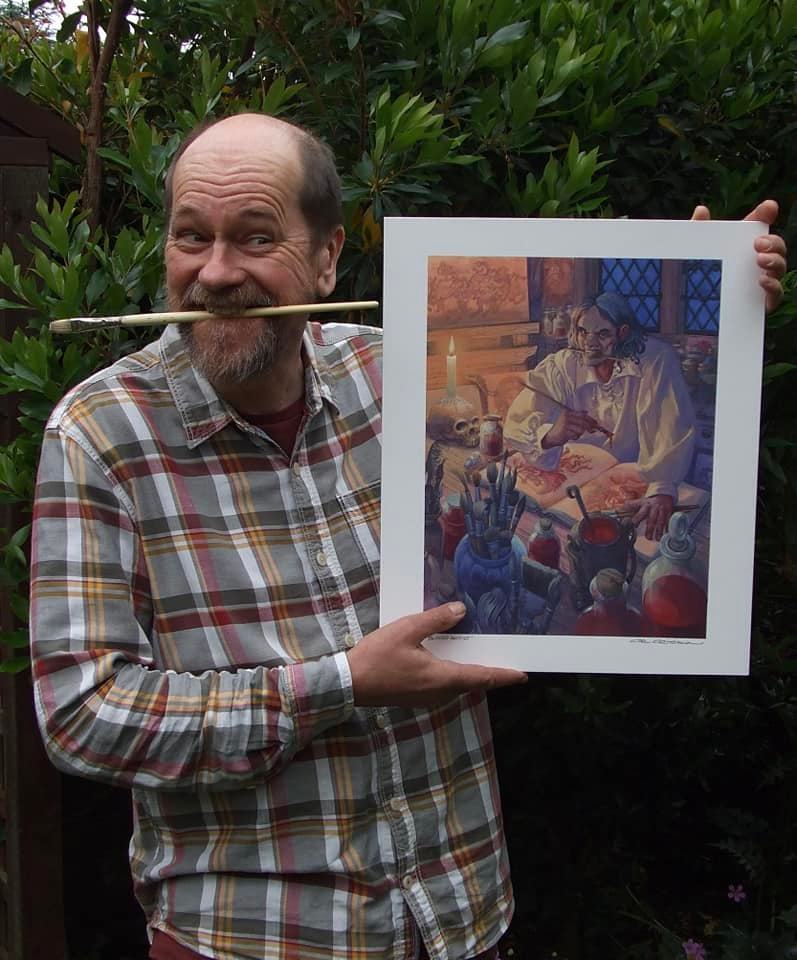 Carl Critchlow is a UK-based artist who broke into the Magic scene with Morinfen and Gallowbraid, a pair of legendary Phyrexian horrors hailing from 1997's Weatherlight. Since then, Critchlow's amassed more than 200 credits, but only 14 since 2012, including Kamigawa: Neon Dynasty's Silver-Fur Master.

He's added to his contributions to Magic with new art for a pair of highly played Commander staples: Azorius Chancery and Blood Artist. Critchlow said the size of pieces, (18" by 15" for Blood Artist and 14" by 11.5" for Azorius Chancery), is roughly double as large as he's accustomed to. 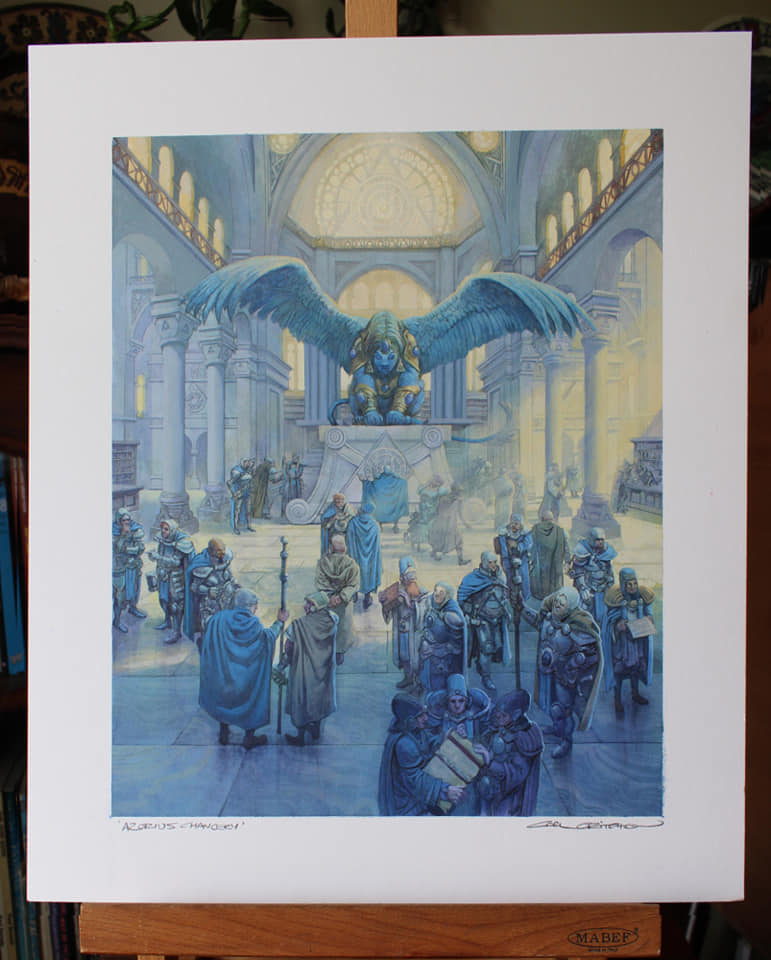 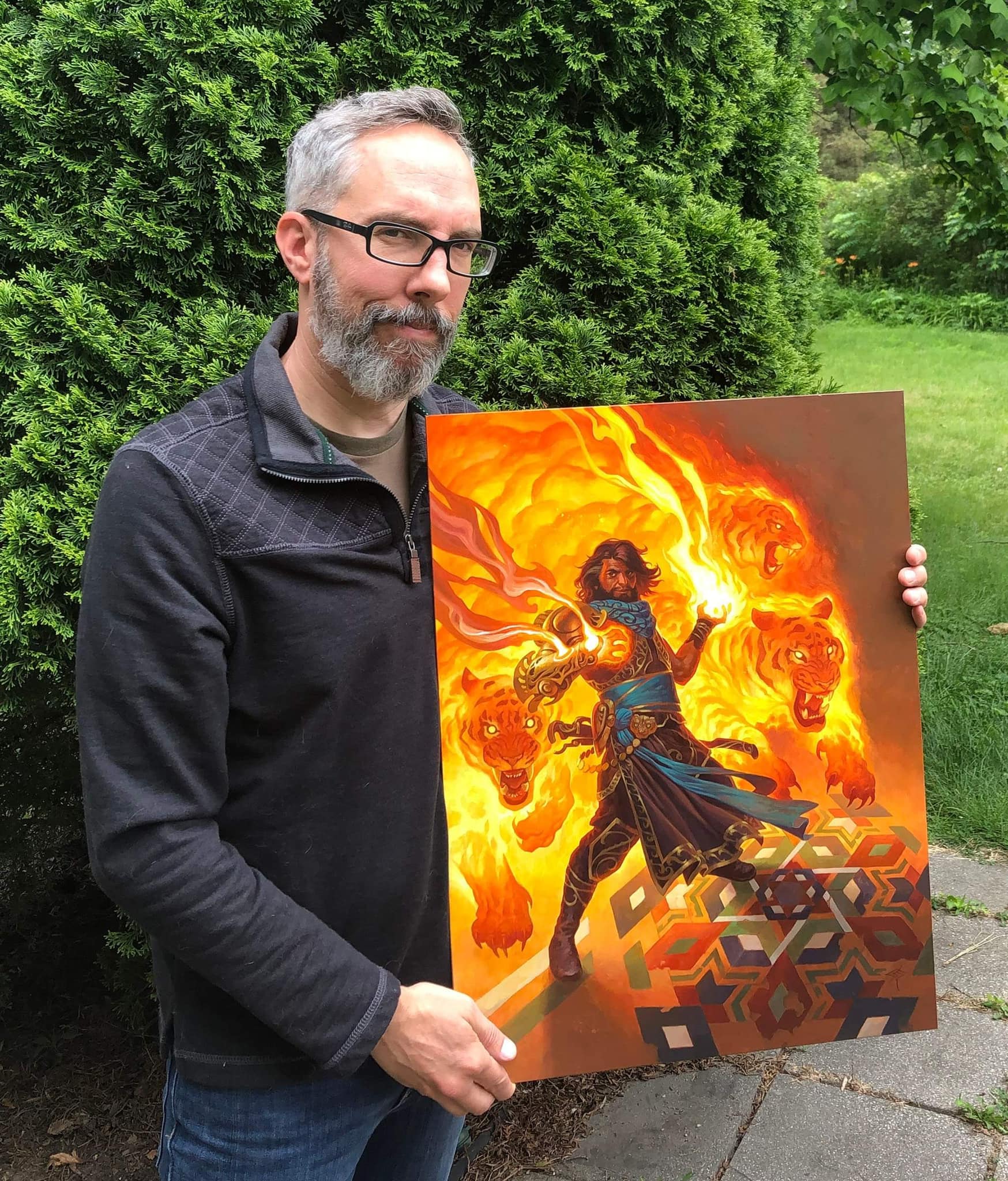 Steve Prescott's been an artist for Magic for 15 years, creating images for more than 200 cards in that span, starting with a pair of Planar Chaos cards in Body Double and Malach of the Dawn. He's perhaps most known for the all-black San Diego Comic-Con 2013 planeswalkers, Parallel Lives, and Zealous Conscripts.

With Double Masters 2, Prescott's provided the art for two reprints: Seasoned Pyromancer and Mana Vault. Of Mana Vault, Prescott said that while he missed working on art for Streets of New Capenna, the art for Mana Vault allowed him to "briefly dip a toe into that art deco water" for Double Masters 2. "It was quite the challenge to take on a spacious interior reliant on specific architectural design elements -- but I'm always up for a challenge," he said. "I ended up building a small mock-up for the vault door to light and for reference, something I rarely do." 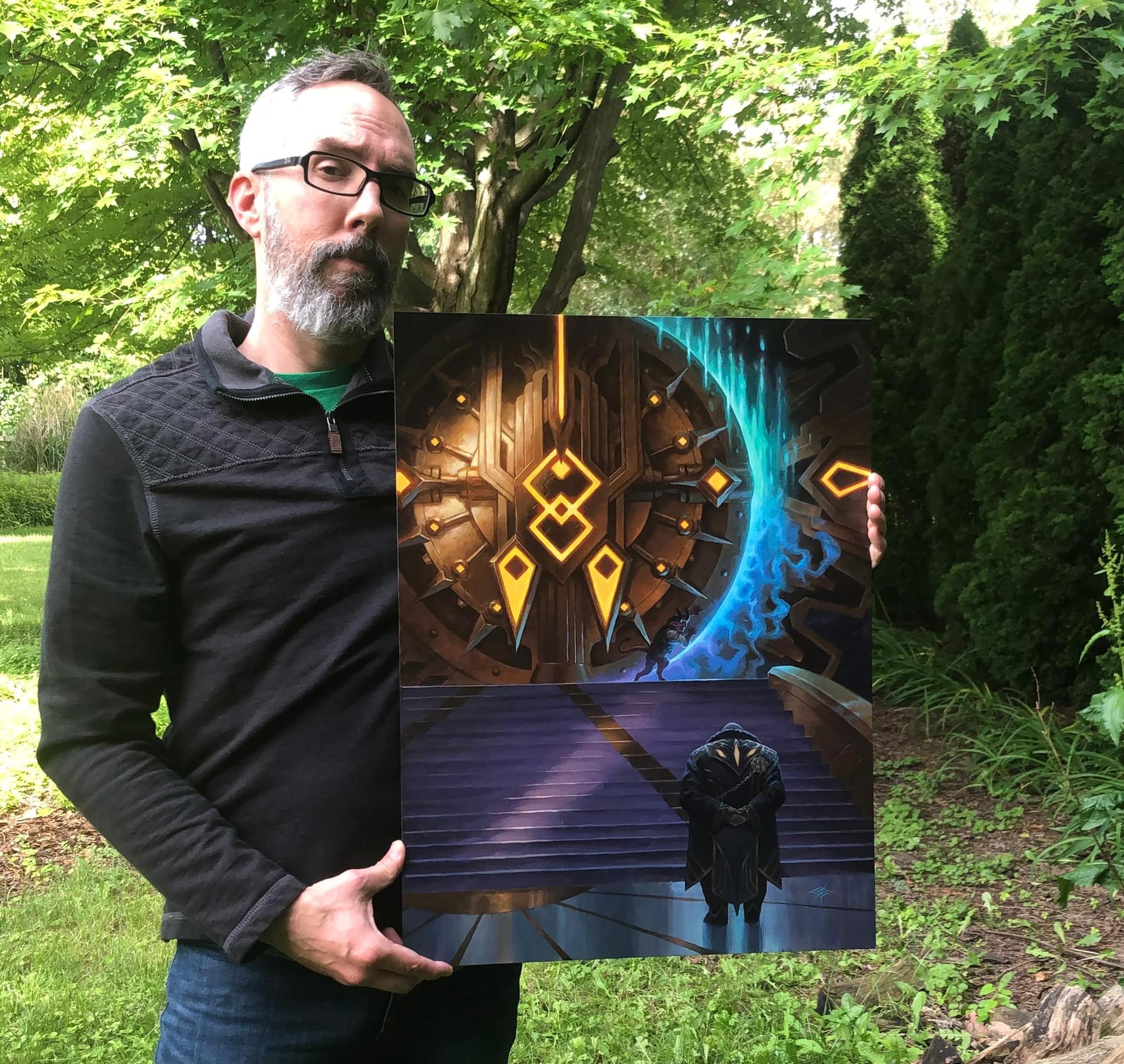 Continuing the theme of challenging designs, the art for Seasoned Pyromancer presented its own hurdles. "I'm so happy the art directors for Magic have been challenging me with not only bigger character-specific work lately, but also challenging me with nuanced age and ethnicity in those characters, so I had a lot of fun pushing myself on nailing down a kick-ass Bollywood action hero," Prescott said, adding that the finished product has been hanging in his studio for almost exactly a year to the day the art was revealed to the public for the first time.

Chuck Lukacs is no stranger to producing new art for old favorites: the last time we had a Double Masters set, Lukacs provided an aesthetic update for both Doubling Season and Land Tax. With the release of Double Masters 2, he's back at it with new art for Mana Drain and Lightning Bolt. Also, fun fact: The new Lightning Bolt art provided here by Lukacs is the 14th new image for the classic card.

Over his tenure as a Magic artist, Lukacs has illustrated nearly 70 cards, starting with Thorn of Amethyst in 2007's Lorwyn. 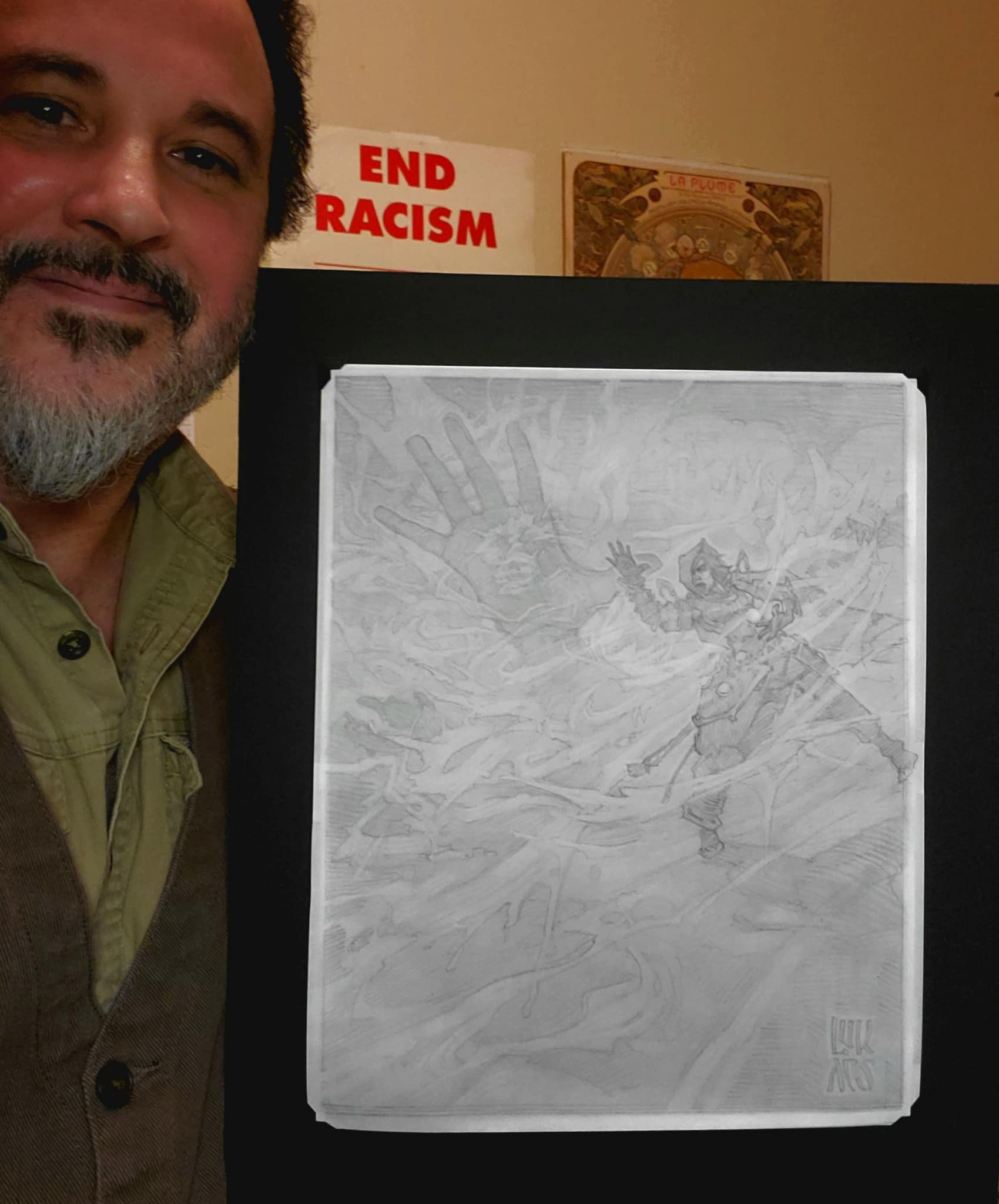 Of his art for Mana Drain, Lukacs said the final art was the culmination of "at least five ideas" tossed between himself and art director Tom Jenkot. "In the end, the symbol of the hand won out, with the mana spiraling and being drawn into the mage's hand and showing as contained in the small blue orbs on her costuming," he said. "Ever since I worked in ceramics, seeing the fire vortex inside a kiln, I've kind of been obsessed with how fire can look almost like vapor."

There was a period of more than a decade where we as Magic players didn't see any new Richard Kane Ferguson artwork. From 2008 to 2019, there was a dearth of RKF, but luckily, that's in the past. Starting with his rendition of Blackblade Reforged, we've seen Furguson return with new art over the course of the last two Double Masters sets, and fittingly, the creator of Dakkon Blackblade was able to provide the art for last year's Dakkon, Shadow Slayer.

Now it's 2022, and Double Masters 2 is upon us, and with it, we get not one but five new pieces of art from RKF, all renditions of previously printed cards. Let's start with Marchesa, the Black Rose. 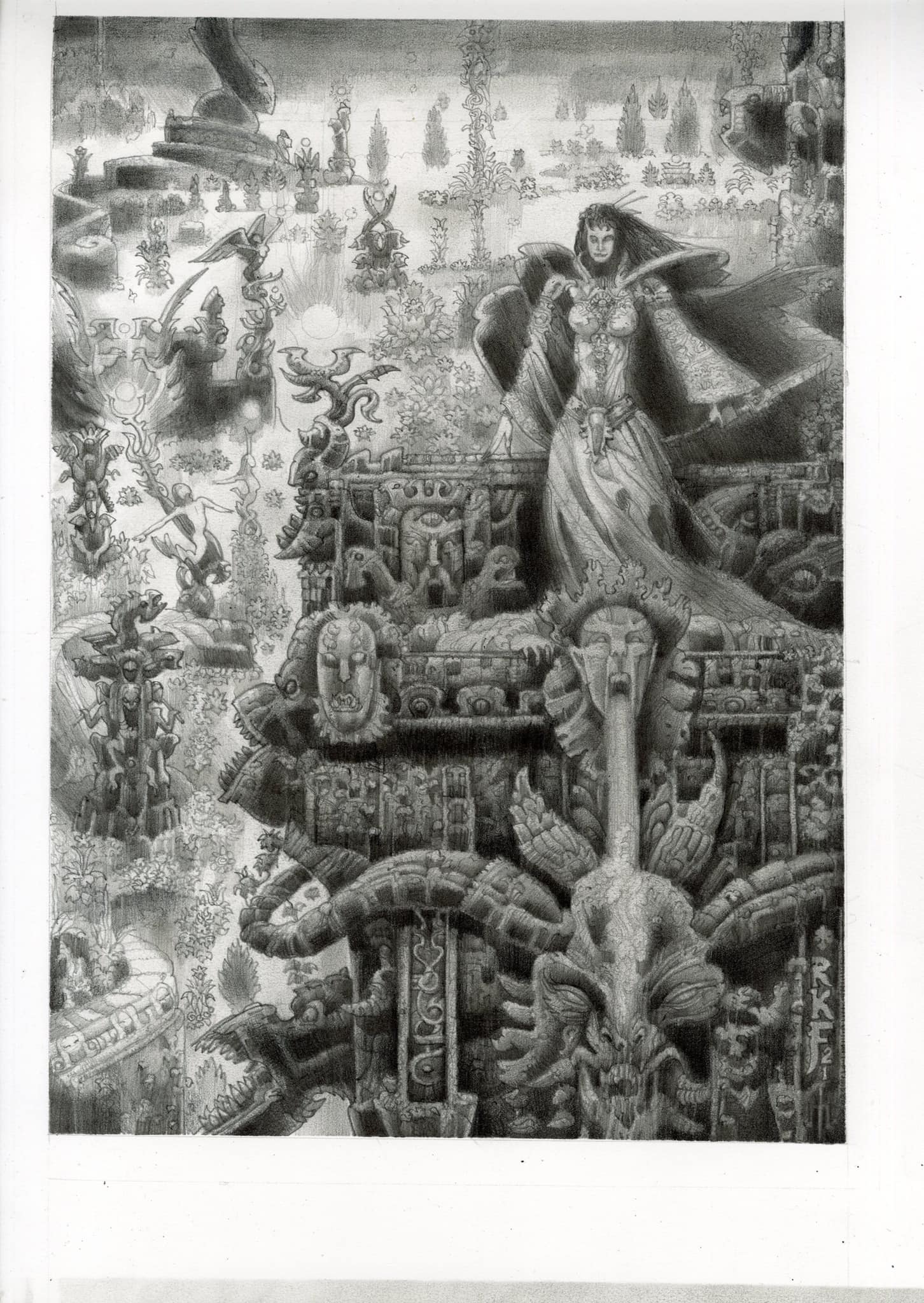 For Marchesa, and all pieces of art he's assigned, Ferguson said he tries to build a backstory around the concepts, themes, and characters provided in the art description. He started with some conceptual drawings, and as he progressed, his ideas began to take shape. The working title for Marchesa, he said, was "Death in the House of the Dragon," and as he created the art, he had an entire story swirling in his head ([sic] throughout):

"A hush falls over the Imperial garden. Whose length and breadth folds and stretches to an almost infinite horizon. The balcony wall comes alive, as does the rest of the garden, as the King draws his final breath at Marchesa's feet. The moment builds in intensity as that silent hush becomes a primordial cry of pain, betrayal and outrage. As the hot, summer night winds begin to wail. And the strange, impossibly ancient sculptures within the garden all begin to dance and writhe and contort. Some in agony... and some with pure malicious joy. if only for a brief moment of the darkest Magic. As they welcome the shade of the fallen king into their midst for all eternity."

Richard Kane Ferguson might have taken 11 years off from Magic art, but even with that hiatus, he's still among the most popular artists from the game's history. Starting with 1994's Legends, he produced a whopping ten pieces of art that have grown to be among the most iconic in the game, cards like Hazezon Tamar, Jasmine Boreal, and Nebuchadnezzar are immediately recognizable and are near and dear to the hearts of some of the more experienced (read: old) players. 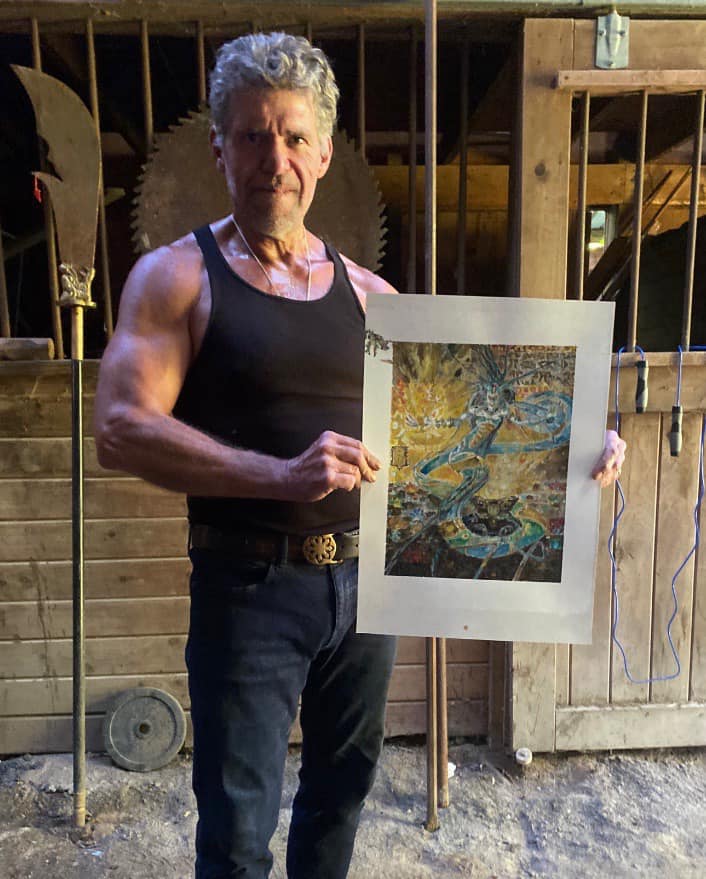 Another artist that was missing from the game for more than a decade, Drew Tucker is another iconic Magic illustrator that made his return in recent years. Rejoining the game with five cards in Modern Horizons 2 (including Brainstone), he's kept that momentum rolling with three pieces of new art for reprints in Double Master 2: Glimpse the Unthinkable, Cavern of Souls, and Forbidden Orchard. 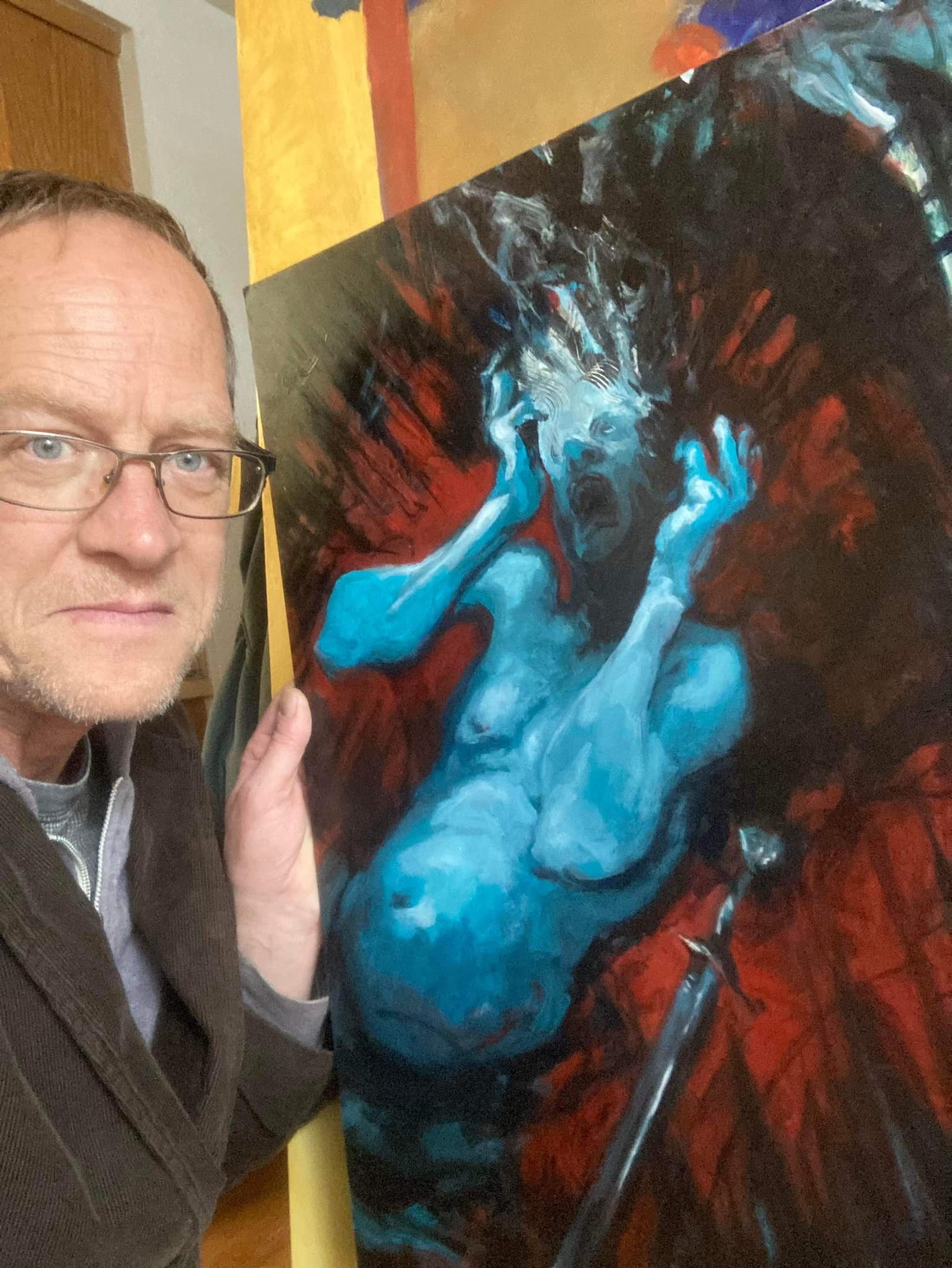 Tucker is the illustrator of more than 60 cards, starting at the beginning in Alpha as one of the original Magic artists. Since then, his distinctive style has provided the aesthetic feel for several iconic cards, including one that is currently experiencing a resurgence in popularity: Dandân. Before his recent return to the game, his art was last seen in 2008's Eventide, on Deathbringer Liege and Grazing Kelpie. 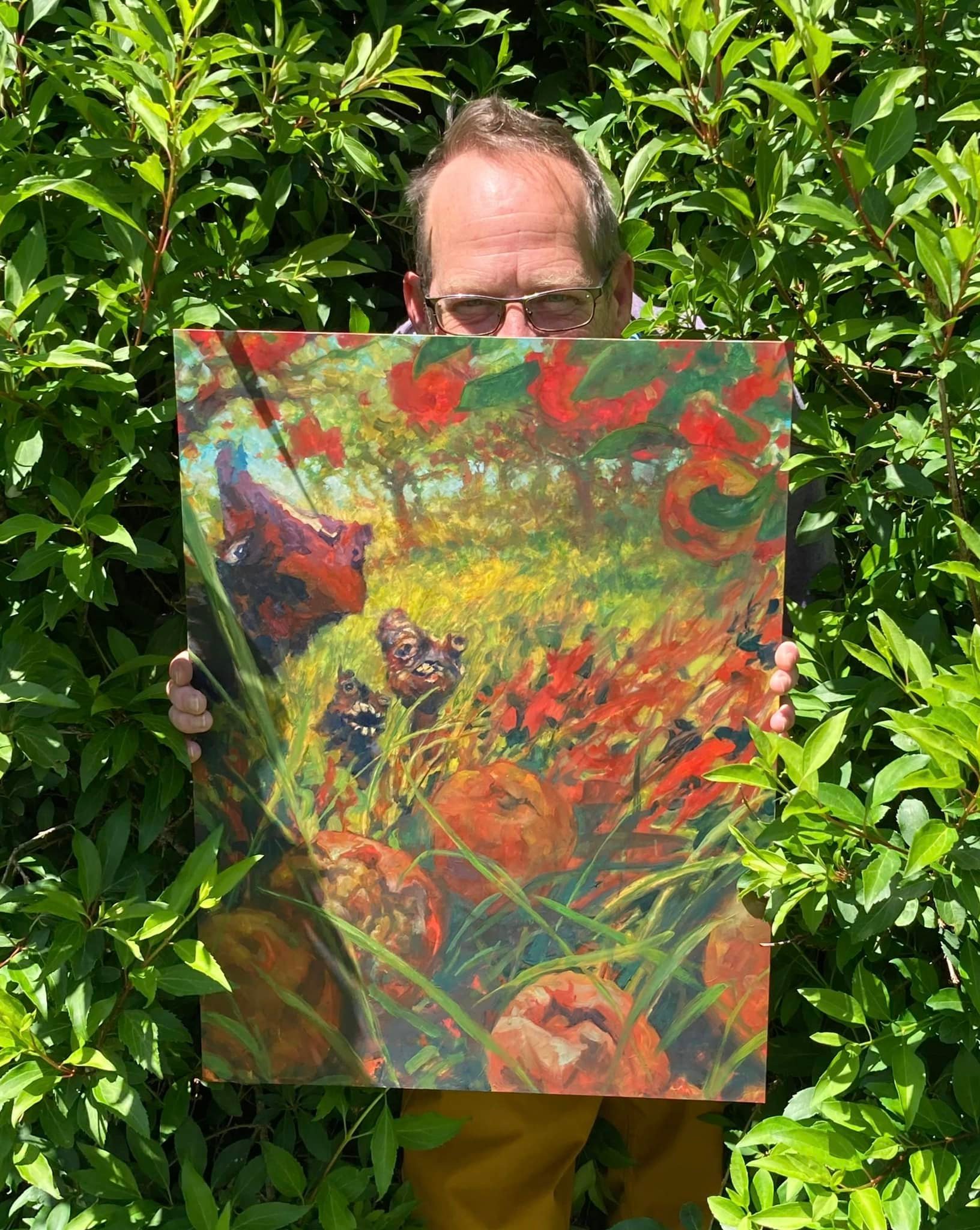 For Old Fogeys like me, it's been amazing to see the return of so many artists who have made an indelible impact on the game since its inception. While the art we've seen in the last 15 years is certainly impressive in its own right, artists like those returning for Double Masters 2 come with a heavy dose of nostalgia.

So which of the full art showcase cards in Double Masters 2 are you most looking forward to opening? And don't forget to keep your eyes peeled for more Double Masters 2 art facts; we've only covered a fraction of what's packed into the set.