Everyone remembers their first exposure to the art of Magic: The Gathering.

If you're old, like me, that art is likely something iconic -- or, in my particular case, just weird enough to never forget. If you're newer to the game, the art that grabbed you could be anything, from depictions of mind mages in blue hoods to megalomaniacal Dragon Gods to sneaky Dinosaurs.

Regardless of how long you've been playing Magic, it's safe to assume the art of the game plays a part in your attachment to it. For Dana Roach, it was a pair of creatures that were both icons for their specific colors - Vesuvan Doppelganger and Sengir Vampire. 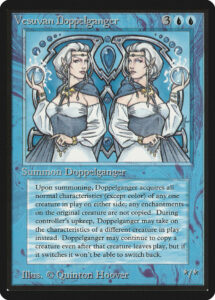 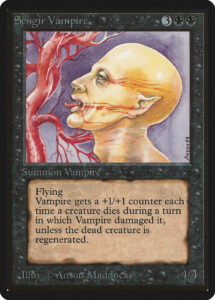 Roach, 46, is a writer for EDHREC and Commander's Herald, co-host of the EDHRECast podcast and YouTube show, and co-host of podcast CMDR Central. He's "old enough to have more salt than pepper" in his beard, so his first glimpse of Magic art is some of the first images created for the game. And it wasn't just the art of the Doppelganger and Vampire that struck him, it was the fact that two wildly different images could exist in the same game. "The Doppelganger art is just perfect -- the figures are elegant and convey the fantasy environment, the background is eye-catching, and the whole thing works perfectly with that old blue card frame," he said. "Everything about it is fantastic."

As for Sengir Vampire -- a piece of art that sent many a parent into a tailspin in the mid-90s when it began to appear in the possession of impressionable youngsters everywhere -- Roach said much like the Doppelganger, it was the perfect image for the frame. "The card is creepy and disturbing, but you can't tear your eyes away from it," he said. "The vampire on it is so...'alien' I guess is the right word, though not in the outer space sense."

The art was "just wrong," he said. "Like it doesn't belong."

It's a credit to Anson Maddocks, of course. The Alaskan-born artist played a crucial role in developing the style of early Magic, and would go on to be instrumental in creating the distinctive looks of Slivers.

As for the Doppelganger, the art was courtesy of Quinton Hoover. Hoover, who passed away in 2013, was, like Maddocks, one of the original 25 artists for Magic and monumentally impacted the game in its formative years. Roach named Hoover as one of his favorite original artists, whose work "really stands out" among cards in those first few years of Magic.

"The fact that the game could have two pieces of art that both evoked such different reactions, while remaining gorgeous, really stuck out to me," Roach said.

Roach said his first experience with Magic came as it does for many of us -- through a friend at school. "I had an older friend in high school who came back after his first year for summer break with this game called Magic," he said. The friend had a "mix of cards" from a number of expansions like Revised, Arabian Nights, and Antiquities. "We all pretty quickly got sucked into the game, scooping up all the Revised packs we could find at any local hobby shops, and bought packs of Legends when it came out that July," he said. "I liked the fluid nature of the game -- you could build a ton of different decks, and each of those decks played differently from game to game, depending on a whole host of factors." 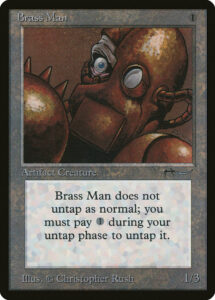 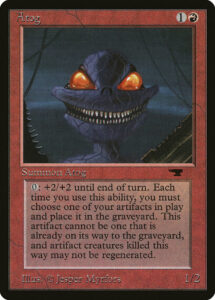 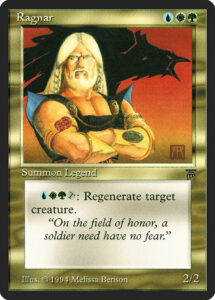 That's one aspect of Magic that hasn't changed in nearly 30 years. People build innumerable decks for almost as many reasons, in dozens of formats both officially sanctioned and made up on the fly. But we all use the same cards, and see the same art. According to Roach, the art of Magic is "very important" to his enjoyment of the game. "I'm primarily a Commander player, and there are commanders I wouldn't run because I dislike their art," he said. "It would just bother me having that piece of art there in the command zone or in play all game." He wouldn't go into specifics, of course, as a personal opinion is not an indicator of quality, he said. "But there are decks I wouldn't build because of the art."

And as passionate as he is about the art he doesn't like, it's just the same conversely. "There are commanders I've gone above and beyond to try to make work because I liked the art so much," he said. "Vela the Night-Clad would be one -- I spent years trying to crack that nut because I just liked the art so much." 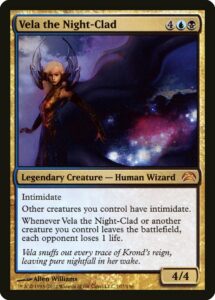 At the start of 2022, there are more than 25,000 unique cards in Magic: The Gathering, and just about as many unique pieces of art, especially if you expand your criterium beyond the cards themselves into promotional pieces and concept art. With nearly two dozen releases slated for the year, that number is certain to rise. But when it comes to artists, everyone even tangentially interested in the game has their favorites. "Rebecca Guay is amazing and makes every common look like a mythic," said Roach. "She has a way to make art that is distinctly her own, while also still looking at home within the Magic 'house style,' so to speak." 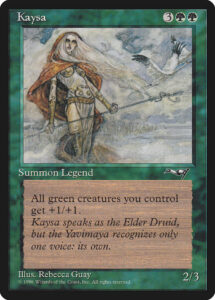 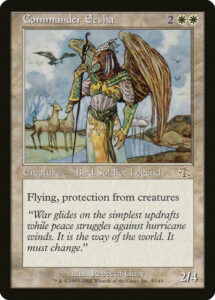 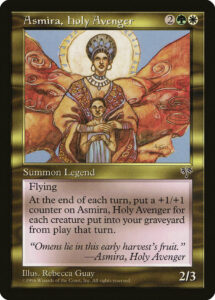 Today, said Roach, there are "just so many great artists putting out great work," it's almost too much of a good thing. "There's just a glut of great work, compared to the past where it was maybe a little easier to make me notice your name when your card was sitting on the table, next to, say, Word of Command." 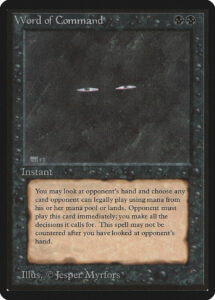 Beyond the commander itself, Roach said he pays special attention to the art when it comes to the 99 as well. "I always customize my basics to the deck I'm playing and there are certain pieces of art I value over others," he said. "Among foil Sol Rings for example, pricewise the Invention seems to be the premium card, but I love the original artwork so much that for me, the Judge foil of the OG art will always be my 'chase' version of it."

And when it was commonplace for artists to be at events -- or that events existed at all -- Roach said he'd seek signatures to further enhance his deck. "If things ever start back up, I think I'm going to attempt to get an entire deck where every card is signed," he said. "I have one where I just accidentally had artists' signatures on a half-dozen cards, so I may as well try to take it all the way." 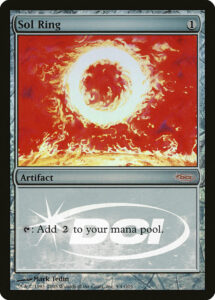 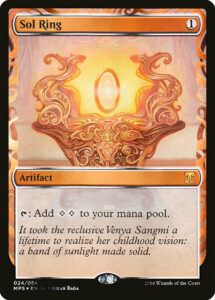 In the meantime, Roach intends to focus on continuing to provide quality Commander content via his writing here at Commander's Herald and at EDHREC, as well as through his podcasts, the EDHRECast and CMDR Central. And for others looking to make 2022 the year they break into the Commander content creation game, Roach said the best piece of advice he has is just to start. "Even if you're not releasing it, just make it -- even if it's for yourself," he said. "And when you do get to the point where you're ready to release it, do it consistently. Reliability is important for content consumers, more than we realize."