I remember being in religion class in seventh grade. I wasn't very focused on the lesson, instead I was looking through some Magic cards I had with me. A girl sitting across from me asked if she could see one and I discreetly gave one to her. After a bit I had asked her to give it back, but she shook her head no. I kept asking her and, like Lucy with the football, she would stick her arm out only to yank it away when I would reach for the card. Frustrated, I said "give me my fucking card back" just a bit above a whisper and the teacher noticed.

My cards were confiscated, I was given after school detention, and received another five demerits. The girl? No penalization. But that was the norm for me while at Catholic school. I would be bullied in some way and would eventually lash out. I'd get detention. The bullies would get off with a warning. After all, I was a disruptive student.

When I was a kid, I was obsessed with Magic. When my parents would say no to getting me precons and booster packs, I would bother them for any printed material about Magic. The novels, the encyclopedias, and InQuest Gamer. If I couldn't have more Magic cards or have people to play with - at least I could read about Magic. I was a weird one. I had the big The Complete Encyclopedia of Magic the Gathering and would spend day after day just flipping through it. Putting asterisks next to cards I thought were neat. I also remember coming across some cards that felt - off.

And then there were times it was Reparations. It struck me as such an odd card. Even as a small depiction of the card in the encyclopedia - the first thing that hit me was the art. Here was a grieving couple, who both looked Black, being given a chest filled to the brim with gold by a white male with blonde hair. The white male is dressed in robes - similar to those worn by Christian missionaries. In the background, you can see smoke billowing over the tree line. The flavor text reads:

There is this pervasive thought in spaces like the Magic community that politics should be kept separate from the general dialogue. When they say politics they often mean anything involving what is often categorized as identity politics. That is to say the issues revolving around marginalized ethnicities and identities. Because let's be transparent - there is no real worry about a thread opening up in the Magic subreddit on local election primaries or the philosophical differences between socialism and communism. They just don't want to hear the minorities get uppity.

But how can we just ignore the impact Magic's depictions of the marginalized affects those who want to see themselves reflected in the game they love? Do we really just pretend that a card named Reparations involving the burning of a village of the Jamuraan people as they receive an apology by way of a chest of gold is not political? A card in a set that takes place in what is ostensibly Dominaria's version of northern Africa - filled with depictions and stories about Black and Brown humans and the politics of their nations. A story where many of the face cards of the set are not the stereotypical Anglo-Saxen figures we are accustomed to in fantasy tales - they are instead distinctly of Arabic and African influence.

It is easy for some people to ignore the 'politics' of a card like Reparations. It isn't even a blip on their radar. It is easy to just explain the card away by trying to make it as literal as possible. A man giving gold to make up for the destruction of the grieving couple's property. Forgetting that it could have been a Suq'Ata merchant giving a Viashino tribe gold. Ignoring the fact of how flippant the flavor text is.

If you've never dealt with racism it is often difficult to comprehend it in all of its forms. Not the cartoonish levels of evil you're shown in media. Nor the viral video villains like BBQ Becky and Permit Patty who weaponize their whiteness against Black and Brown bodies in a way that is hard to dismiss as anything other than it is. It's more than the obvious. It takes more nuance than spotting Invoke Prejudice or Imprison. 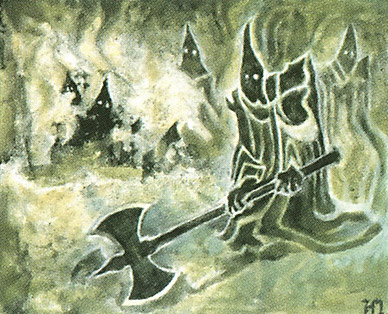 Sometimes - it is innocuous like Disruptive Student. Often times it takes a lived experience to see between the lines in the way that Neo sees the code of the Matrix. It takes understanding what it means to have the first card depiction of a major Black hero from the Mirage story be a youth depiction of a class clown. The only shown Black student of the Tolarian Academy being nothing more than a student who uses his gift for magic to pull pranks and bully his classmates.

If you've never been the other, you don't see the stereotype. If you have never had been called "Ishbu" or "Hindu kid" as kids shoved you in to lockers or told you you should pick up that mop to practice cleaning your dad's 7-Eleven you wouldn't pick up on the cues. You may not even notice how odd Teferi's skull is drawn in the card art compared to other characters in other cards. But the unintended narrative is there.

A Black student can't be at a prestigious magic academy without being a troublemaker.

Forgetting that the Zhalfirins pioneered the five colors of mana on Dominaria. That Teferi's homeland could be best summed up as Dominaria's Wakanda. More technologically advanced and magically sophisticated than any other nation on the plane. 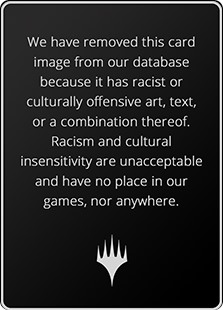 During the height of the Black Lives Matter movement during the summer of 2020 Wizards of the Coast, like many companies, was being held accountable about some of its questionable card names and arts in Magic: the Gathering, The discourse being centered around that Magic and Wizards needed to stake stock of the harm it had caused and the lack of diversity it had become known for. What the conversations didn't revolve around was the banning of a handful of cards that varied from objectively offensive like Invoke Prejudice's seemingly Klansmen art to the culturally insensitive Pradesh Gypsies. Wizards of the Coast explained this decision in an article titled Depictions of Racism in Magic, saying "[t]here's no place for racism in our game, nor anywhere else."

Racism isn't always just saying the N-word. Racism is more than cards of Black bodies naked and imprisoned. Cultural insensitivity goes beyond words like "gypsies," "jihad," and "crusade." Sometimes we have to remember it's about boiling a Black child down to a disruptive student and handing a Black couple gold given by a white man. And sometimes it's about a Black child in a sea of whiteness being penalized for their inability to shrug away injustice.