JACKSONVILLE, Fla. -- The Milson family's Thanksgiving dinner was interrupted by an hours-long monologue from young Brett Milson after Uncle Rob unwisely asked how that Magic game is going.

"There was chorus of groans after I asked Brett how his hobby was going. I thought someone had spilled gravy or something, but I quickly noticed everyone in the room was glaring at me. At first I thought I said something that might be upsetting to Brett. On the contrary, Brett's face lit up and became quite animated as he began talking, most of which I didn't understand. He had been reserved all evening, so I was happy to see him engaging with family."

"Though everyone else was glaring at Rob for bringing it up, my wife Lisa was glaring at me. She asked me to tell our guests not to mention Magic: the Gathering, and I forgot. Rather than deal with that, I got up from the table and announced to the room that I had to shit really, really bad. I hoped that would buy me enough time to let Lisa cool down, but also stop her from following me out of the room. Yeah, I got a grossed out stare from my mother-in-law, but not having to listen about that stupid card game for the next hour was worth it."

After a good long while, Uncle Rob began to understand the implications of his mistake.

"It was great to hear him talking about something he loved. But he just ... well, he didn't stop. He went on a solid twenty minutes about something called BDH or whatever. I think it was some kind of drug he and his friends do. Anyway, my wife Susan tactfully interjected by asking about his school but it was like he didn't hear her. He just kept going. On and on. Talking about his favorite cards and what they do. He started pulling out cards that I guess he kept on his person? He gave one to me to look at, I guess expecting that I would be impressed or something as he kept saying 'right?!'. The art was cool, but I didn't understand anything else. I tried my best to be excited about what he was showing me, though that made things worse."

Uncle Rob needed an out, but it became apparent that he was alone on this one.

"Rob turned to talk to me, but Brett was relentless," said Aunt Susan. "He was glancing around to the others, but everyone gave him a kind of 'you're the one who fucked up, you deal with it' look as they all began having forced conversations with one another; a "polite" way to avoid his silent pleas for help. I thought of ways to get him out, but every plan I devised put me at risk of being pulled into the conversation. I couldn't allow that to happen, so I grabbed Grandma Myrtle and asked her to accompany me outside. Abject terror shot across my husband's face as my exit broke the seal for the others at the table, who--also sensing they too may be in danger--began making their exits from the dinner table. It wasn't my most proud moment, and I do have some regrets. He looked at me as though I took him for a drive, let him out of the car, then drove off. 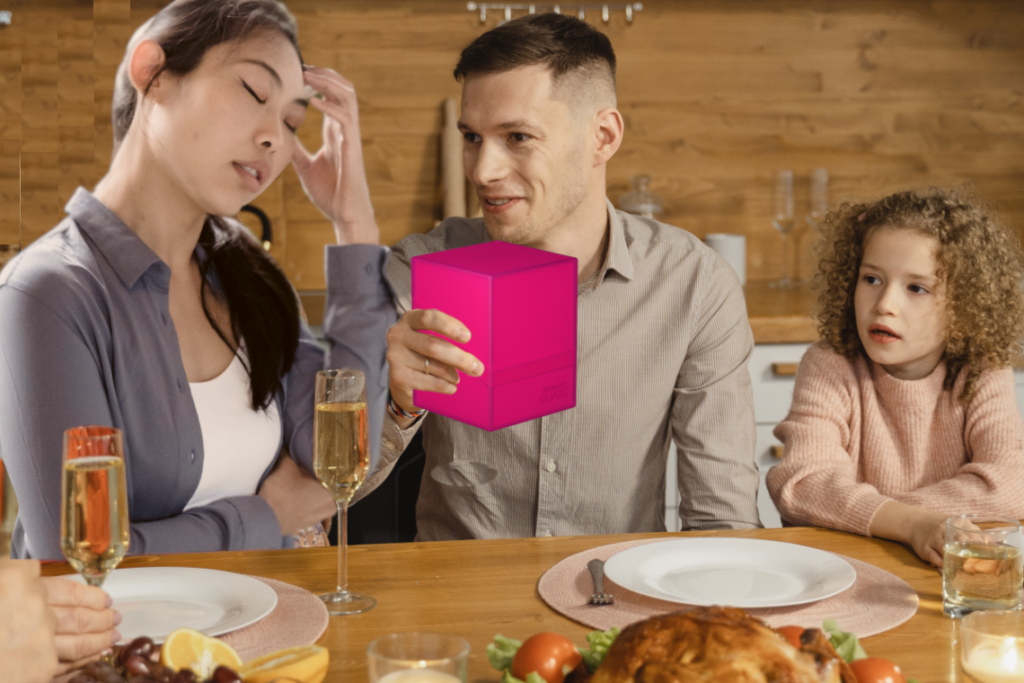 "After everyone else in the room abandoned ship, leaving me to the whims of young Brett and his ongoing sermon, I thought he might have wrapped things up. Before I knew it, Brett was moving plates aside and pulled out these mats and boxes of cards. I heard some laughter coming from those watching in the distance. Before long, young Brett began explaining every single rule, some of which made no sense at all. The game had rules, but the cards changed the rules, so in the end it felt a little bit like this Thanksgiving dinner. Chaos.

"I truly thought this was the end. That I'd spend the rest of the night trapped here, unable to move. Unable to speak. As the walls closed in around me, I remembered something my Mom once told me. 'Look to your brother for help.' I never paid much attention to her words since Almon was almost always a complete dick to me. But in that moment I knew why my mother had given me that advice. Almon had experience with this and knew what to do. He was the first to exit. He knew what was going to happen and knew how to save himself. As gross as he was I knew I had to channel my older brother's wisdom, so I turned to Brett and said "Sorry, dude. I gotta go shit really, really bad."