Hey folks, I’m Chris and I’m YOUR Commander Mechanic. You may recognize me from my YouTube Channel or from guesting on major streams around the community—I’m a deckbuilder and brewer with a very analytical view of the format of Commander. Some have said I take a competitive mindset and apply it to casual Commander, but I prefer to think of it as taking an efficient look at deck building. More of the game is played before you ever sit down at a table with other players.

There’s a lot to be said about other players’ impact on play experience. Expectation mismatches, lack of communication, and differing opinions on what constitutes ‘fun’ can all play a part in how much you enjoy Commander. Throughout this series I want to take a look at how you can improve play experience - your own and that of others—before you ever play a game. Avoid not being able to play the game due to deck building issues, avoid imposing poor scenarios on others, and ensure you have concentrated efforts in mind when deck building.

But, as always, Commander is about having fun YOUR WAY—don’t let anyone tell you there’s a right or wrong way to play this game.

Look at those Curves - What is a Mana Curve?

Mana curves are another aspect of pre-game deck building that many take for granted. People want to play the spells they want to play and aren’t mindful of where they fall in the pacing of the game, or in comparison to their strategy.  When you use a deckbuilding tool you’ll see an analysis that looks like this: 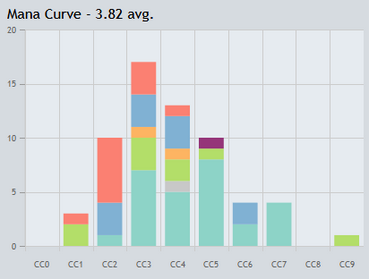 This is referred to as a ‘mana curve’ and shows you where your spells fall from a casting cost perspective. Many Limited players in draft or sealed are VERY aware of their mana curves as it’s assumed the game will go on for an amount of turns to limit higher casting cost spells and place emphasis on the middle of a curve.

There are a few reasons we want to be particularly mindful of this, and it ties back in to play experience from a self-influenced angle.

Playing to your Curves

Knowing what the average mana value of the cards are in your deck list allows you to anticipate an average scenario. For instance, if your deck contains more 2-mana value cards than any other casting cost, you know that in order to cast the majority of your deck you only need to hit 2 mana.

Your next milestone is 4 mana, so you can, on average, cast 2 spells per turn. Then 6 mana, where you could be reliably casting 3 cards from your deck each turn.

Which means you can build your deck accordingly, knowing you need to hit 2, 4 and 6 mana to cast the majority of your deck. That means you want turn 2 mana generation so you can hit 4 mana on turn 3 reliably. After all, the player who spends the most mana per game often wins.

The other factor to your mana curve is not only your “peak” or your most common mana value, but where your commander falls in your curve. Our format is unique in that we have cards always available to us, and we should be taking advantage of that.

I have a Willowdusk, Essence Seer list I recently put together as an upgrade to the Commander 2021 precon, Witherbloom Witchcraft.

Now the goal of this deck is to lean HEAVILY into synergies with your commander, losing life and gaining life to put counters on creatures and gain more life. Knowing that Willowdusk, Essence Seer is essential to our strategy we now need to factor in casting her at 3 mana, and potentially 5 and 7 mana if she gets removed repeatedly, increasing thanks to commander tax.

The deck has a curve that looks like this: 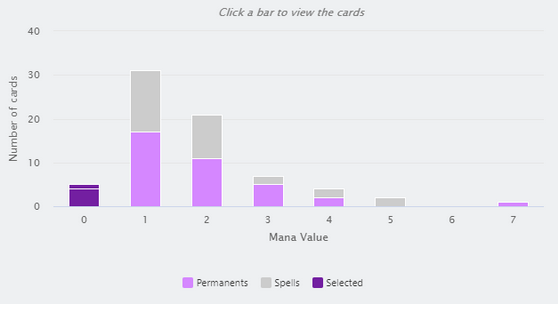 We need to make sure 2, 4 and 6 mana are achieved to cast the majority of cards in our deck, and 3, 5, and 7 mana are hit to cast our commander reliably.

Previously we discussed opportunity costs to lands and how that can prevent us playing on-curve. If we know we need to reliably be casting spells on turns 2-7 we CANNOT afford to be taking a turn off to play BEHIND our opponents. If we cast only a 2 cost spell on turn 3 and not our commander, our whole game plan is now 2-3 turns behind. That’s giving our opponents the opportunity to pull ahead from a board state and power level perspective.

There are instances where we may WANT to do that, or where we may have our next turn planned out but not be able to achieve it because we don’t have the mana available. And that, again, is a self-imposed poor play experience.

If you know what your game plan is, ideally, when building your deck then you need to build to that. Make sure you know where your key turns fall, and make sure you can reliably take advantage of that. Mana availability, mana production, and mana costs ALL need to be considered while building a deck or you may not get to PLAY a game of Magic!

On average, most games of Commander last between 7 and 10 turns. Naturally some can last much longer or much shorter, but that depends on the playgroup, as well as the discussed expectations of your play experience.

But this is an important stat. Unless the majority of your deck is mana ramp (Mind Stone, Elvish Mystic, Three Visits) you’re probably only going to be able to cast ONE big-mana spell per game before it’s over. So packing your deck with bombs that cost 7, 8, 9 or more mana is going to leave you with another poor play experience—a handful of spells you can’t cast and likely will never cast.

That’s another self-imposed play experience that weighs heavily on players. How many times have you heard the phrase “If I only had one more mana!” or “I never got to cast my Expropriate?” Those are deckbuilding considerations that affect player experience that don’t involve other players—no one made it so you didn’t have the mana to cast a spell. No one told you to put 10 spells that cost 8-10 mana in your list. That is an experience you set up for yourself while building.

If you want to avoid these scenarios, build to your plan.

Ask these questions, put your list together, then see if expectation meets reality. This helps make cuts from a deck you’re building as well. I’m always fond of saying “Cut From The Top:” if you remove cards from the top end of your mana curve, you increase your opportunity to draw playable spells and decrease the opportunity to be drawing a dead card that won’t impact the game or improve your play experience.

Now don’t let anyone—myself included—tell you there’s a right or a wrong way to play Commander. But if you’ve built a deck and you’ve played it and it’s not doing what you want it to do… keep these factors in mind.

Until next time folks, good luck & have fun!