In 2019, Wizards of the Coast released two versions of the Mystery Booster Magic: the Gathering set: one for retail, and one for conventions. The last card slot in the retail boosters contain one of 121 previously released cards reprinted in foil, and they were mostly esoteric: One With Nothing, Celestial Dawn, and even Panglacial Wurm all made the cut. This was fine, but the Convention Edition outshines it with wholly unique Playtest cards featuring crudely drawn art, wildly creative effects, and a warning that these were not for Constructed play.

But as someone who regularly ignores the labels on various chemicals around my house, I’m going through every piece of cardboard here and ranking them by if they could, would, and should be printed into Commander. I’ll also crown the champion card that absolutely should be legal in the format. Who gets to graduate to real boy? Let’s go! 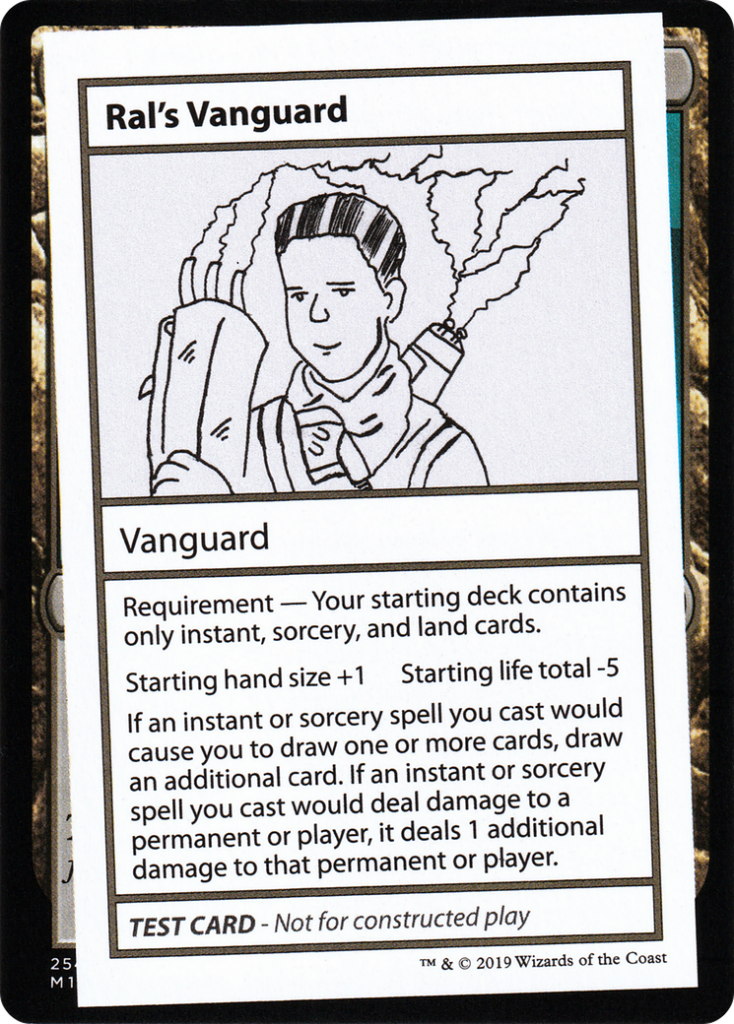 Vanguard was basically Commander before Commander was Commander. When you shuffled up your deck, you chose a Vanguard that would change your starting life and hand size as well as offer a passive effect throughout the game. The power of these effects ranged from unplayable trash, like “Your creatures get +1/+0” (Maraxus), to literally doubling your mana (Sisay).

In terms of power, Ral’s Vanguard is inoffensive. It only supplements your card draw and burn instead of outright doubling it. What’s unique about Ral compared to the previously printed Vanguards is that he has a Companion-like requirement that your deck can’t contain permanent spells, which poses an interesting deckbuilding challenge.

Couldn’t: Of course, meeting Ral’s requirement isn’t possible in Commander because there aren’t any purely instant and sorcery generals, so Wizards can’t really print this into a Commander set.

Wouldn’t: Vanguard’s deader than Banding, and if there’s one thing Wizards hates, it’s printing products that nobody will buy.

Shouldn’t: Show me a playgroup that’s played Vanguard Commander, and I’ll show you the only four people who want this card.

Banding Sliver is a Sliver that gives Slivers Banding, the meme-tier keyword everyone loves to be confused about. Personally, the dogpile always annoyed me. Ignorance isn’t a virtue, and Banding isn’t all that complicated to begin with. If you really wanted to make life hell, try a Licid Sliver instead. I just want this so I can throw it in Gabriel Angelfire with Maskwood Nexus to get everything blocked by everybody with a Lure.

Could: There’s nothing in the rulebook that says Slivers can’t have friends.

Wouldn’t: Wizards doesn’t respect the Timmies in the audience enough to release this card in even a Modern Horizons set, but the inclusion of Volunteer Reserves in the Mystery Boosters proper suggests that there’s at least a little hope.

Should: Hell, even if they released it as one of those Secret Lair-only prints, I’d unequivocally advocate for this card. 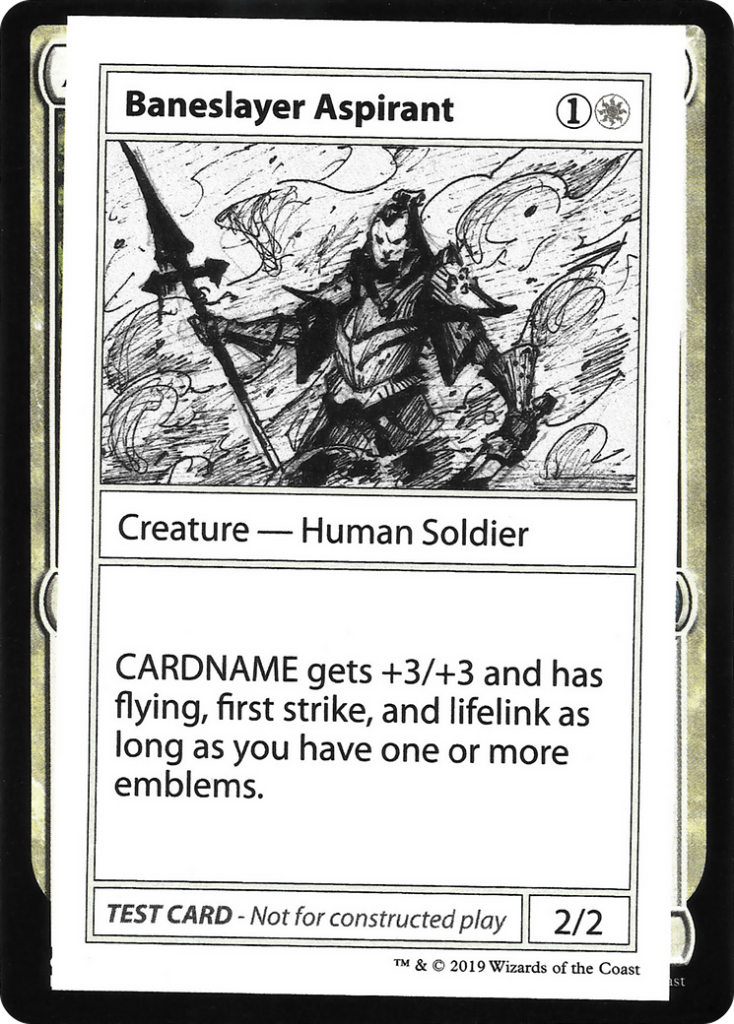 Baneslayer Aspirant is a bear that gets way stronger when you get an emblem. Normally this effect would be redundant, because if you’ve conjured up a Venser, the Sojourner emblem, it’s not gonna be the 5/5 beater that causes your friends to punch you in the face. If you’re running the cool-kid planeswalkers that’re less skittish about emblems, like Sorin, Lord of Innistrad, though, a Baneslayer Angel for two is no joke.

Could: In terms of power level, this is nowhere near as oppressive as Serra Ascendant, and if you think that’s healthy enough for Commander, you can’t possibly oppose printing this.

Would: It’s a little cute, but when Wizards prints their inevitable superfriends precon, this will slot right in.

Should: This is for those of you that like making decks with a brand that stick to it come hell or high water.

Enroll in the Coalition

When you Enroll in the Coalition, you become a Flagbearer, which means you have to be targeted with all the burn spells and targeted draw. This protects your creatures at a price that most people don’t want to pay, but if you’re in the Mirror Sheen spell-redirection deck, it’s gravy.

Couldn’t: Unfortunately, players can’t have creature types… yet. When they do, I’m definitely turning myself into a Dragon.

Wouldn’t: “White can’t redirect spells, only red and blue can do that! Would you like some flavor of ward, though?”

Shouldn’t: I’d love to see this as a Curse that you can hit anyone with in the next politics-themed precon. As is, this is kind of bland.

Five Kids in a Trenchcoat 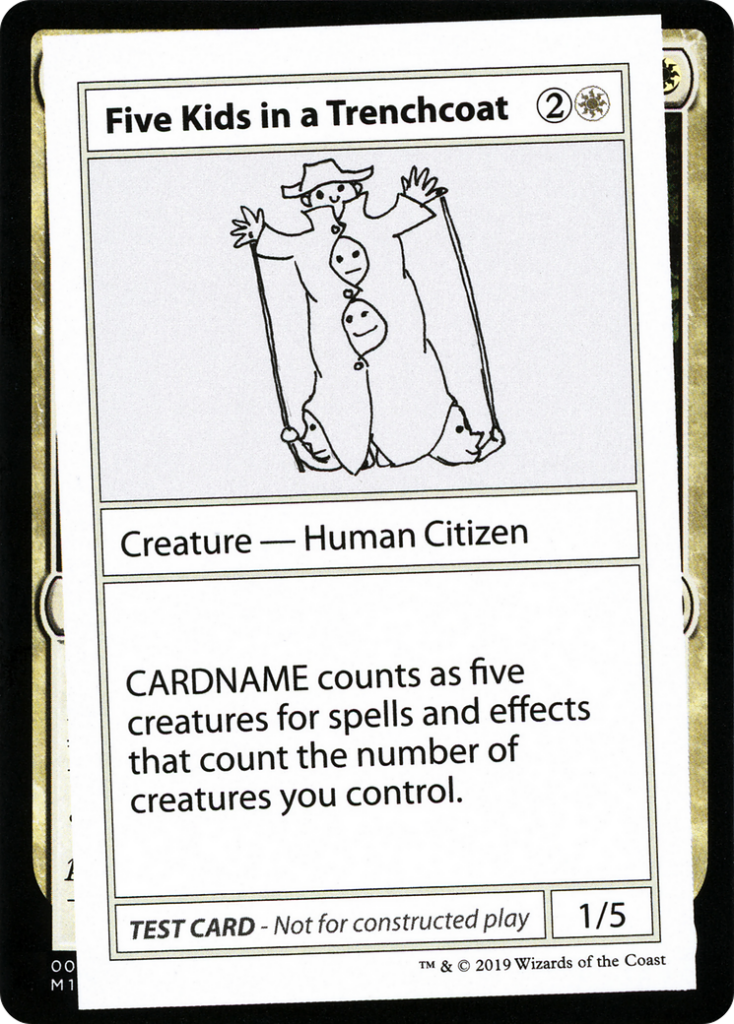 “Yes, my name is John Personson, and I would like to buy one marijuana.”

Couldn’t: There’s no way this card would ever make sense. There’s too many questions. Shamanic Revelation is easy enough, but would it count as two creatures for Tergrid’s Shadow? If it’s made snow, does Abominable Treefolk get +5/+5? How does it affect Rise of the Dread Marn when it dies?

Wouldn’t: Wizards would just make a card that makes three 0/0 tokens or something.

Shouldn’t: I don’t want to sit through the arguments this card would generate, and I just argued that Banding Sliver should be legal. 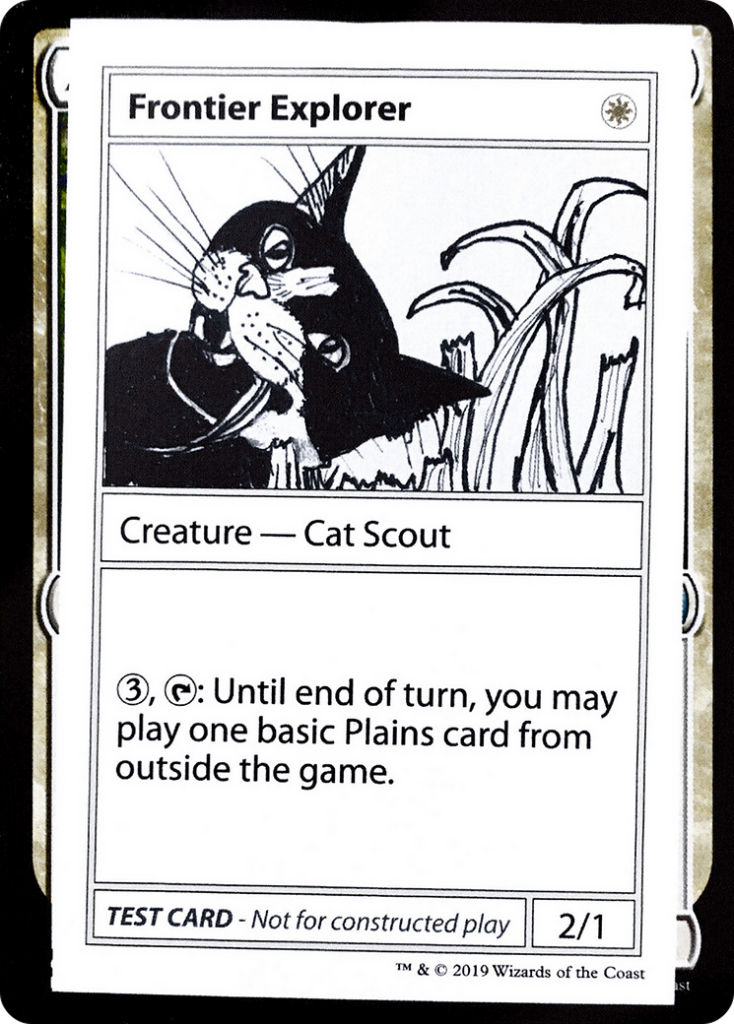 This is a creature that lets you play Plains from outside the game, guaranteeing you consistent land drops. It’s not actually ramp, so don’t worry: green’s sacred slice of the color pie is safe.

Couldn’t: Commander has no sideboard (except for Companions), so this won’t work, but modifying this card so that it would search for lands from your deck seems like it would be missing the point.

Would: The sideboard is actually space that Wizards has been experimenting with recently. Wish is already a thing, after all, and fetching only basics is just restricted enough to see a printing.

Should: I don’t hate this for other formats.

This is less useless than it first appears, because this represents six zone change triggers for just two mana. I built an entire deck around casting X spells for 0 just to get that sort of power, and this would slot right in. On the other hand, if you’re in weenies and you have an anthem, it’s above-rate compared to Raise the Alarm, and even if you just like jank garbage, it’s Arcane.

Could: Spinal Parasite already exists, and that’s more of a meme than this could ever be.

Wouldn’t: Wizards would never print a card this confusing to newcomers.

Should: They should do it anyway. Newbies are smarter than we give them credit for; all you have to do is put it right next to an obvious payoff like Blood Artist and they’re off to the races. 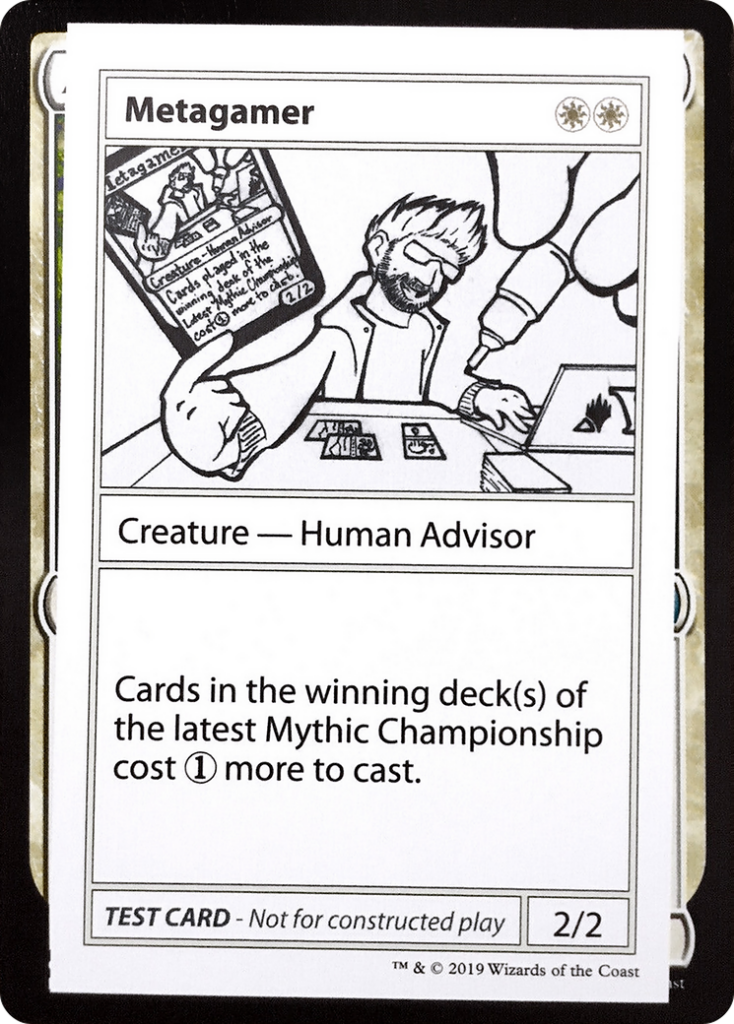 This guy was made irrelevant the second Alchemy was announced.

Couldn’t: Depends on the current status of the Mythic Championship. Is it even still running?

Wouldn’t: If Wizards ever deigns to print this, it’s in acorn stamp at best.

Shouldn’t: Looking up what this affects is the most annoying thing in the world. It doesn’t even make sense for the environment it was designed; how many sealed piles are you facing that are carbon copies of a championship deck? 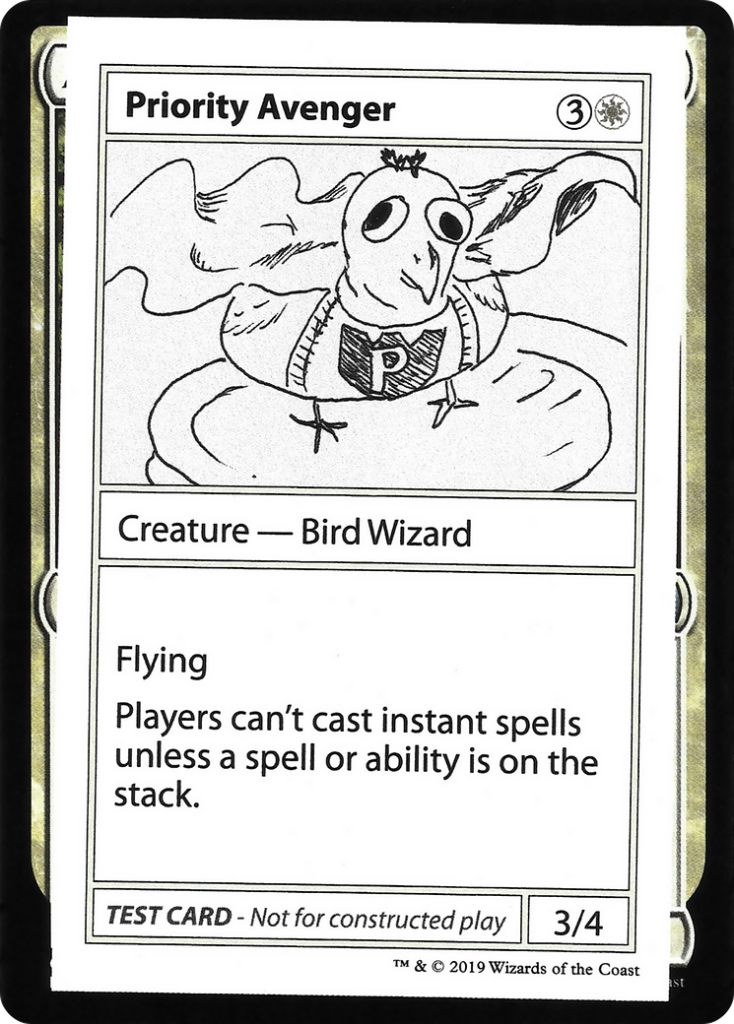 I’m not convinced this even does anything. It messes with people interacting with you… right up until you try to do something, but if your permanents’ abilities are locked down they’re effectively soft-removed anyway. Not to mention it’s symmetrical, so you’re left unable to cast instants until you activate something, at which point you’ve opened everyone else up to interact, so Priority Avenger might as well not be there at all. I guess it’s a 3/4 flyer for four?

Could: This is a card that technically makes sense, which is the best kind of sense.

Wouldn’t: Only five or so cards reference the stack at all, and this ain’t gonna be one of ’em, chief. 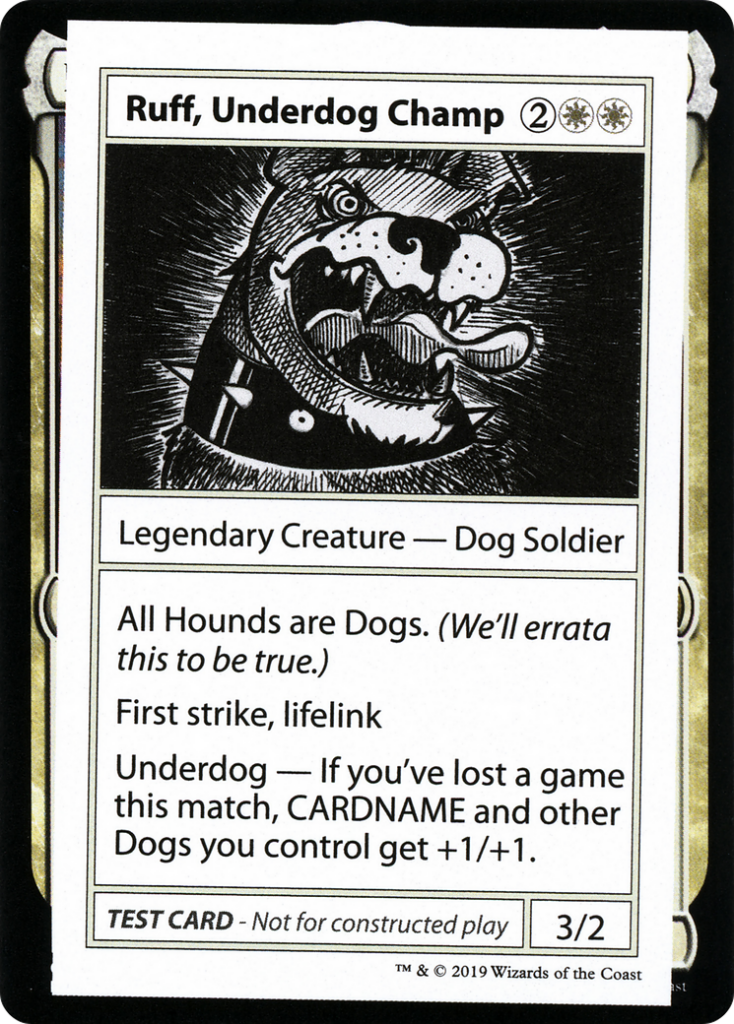 It’s the most worthless characteristic-defining ability since Wood Elemental! Not only that, Underdog doesn’t do anything in one-game matches like Commander and whatever Wizards is doing with Standard, rendering Ruff, Underdog Champ a 3/2 French vanilla pooch for four.

Could: I think it’s possible for the formats that have actual matches. Maybe in a set hyper-focused on Draft, but it would have to be the Conspiracy of draft to even remotely fit.

Would: Wizards already printed the important part of this card directly into Gatherer. You’re already playing with pupper!

Shouldn’t: If only Underdog was based on the current state of the game, like having the least life or least cards in hand. Until then, it’s back to the pound for Ruff. 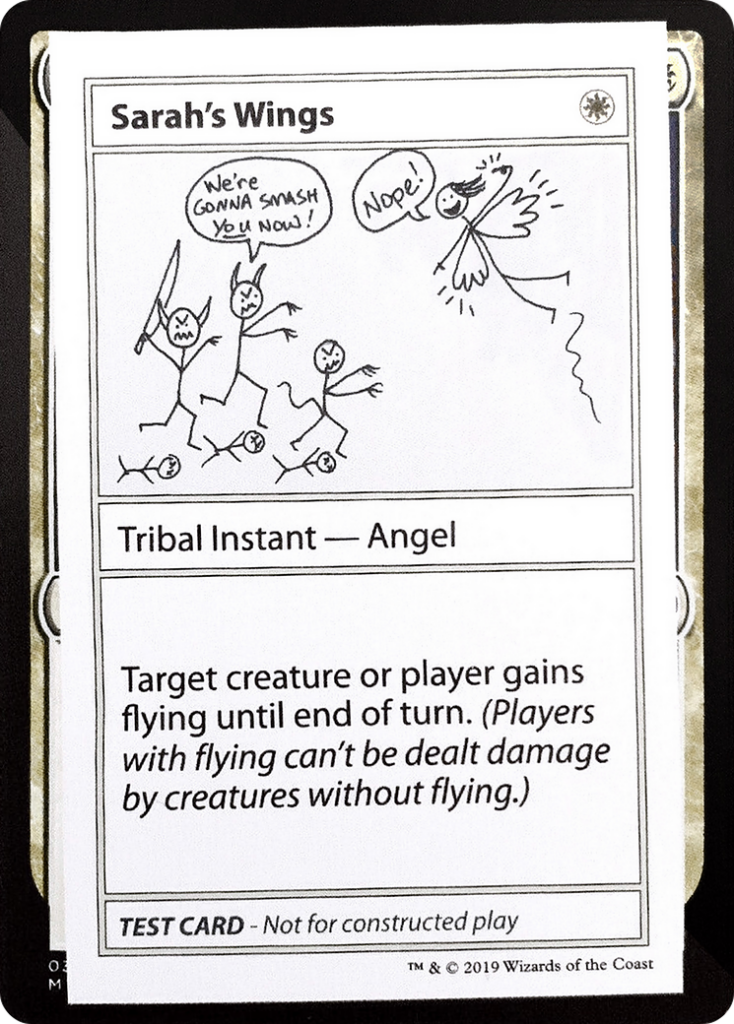 This is actually Fog stapled to a Jump, and Wizards has been on a Fog-with-upside kick lately.

Could: With very slight wording changes, this is a totally legal card.

Would: I can’t see why not, though I suspect they’d find some reason to bump it up to 1W.

Should: I love me a Dawn Charm, and the tradeoff between offensive and defensive utility is interesting. 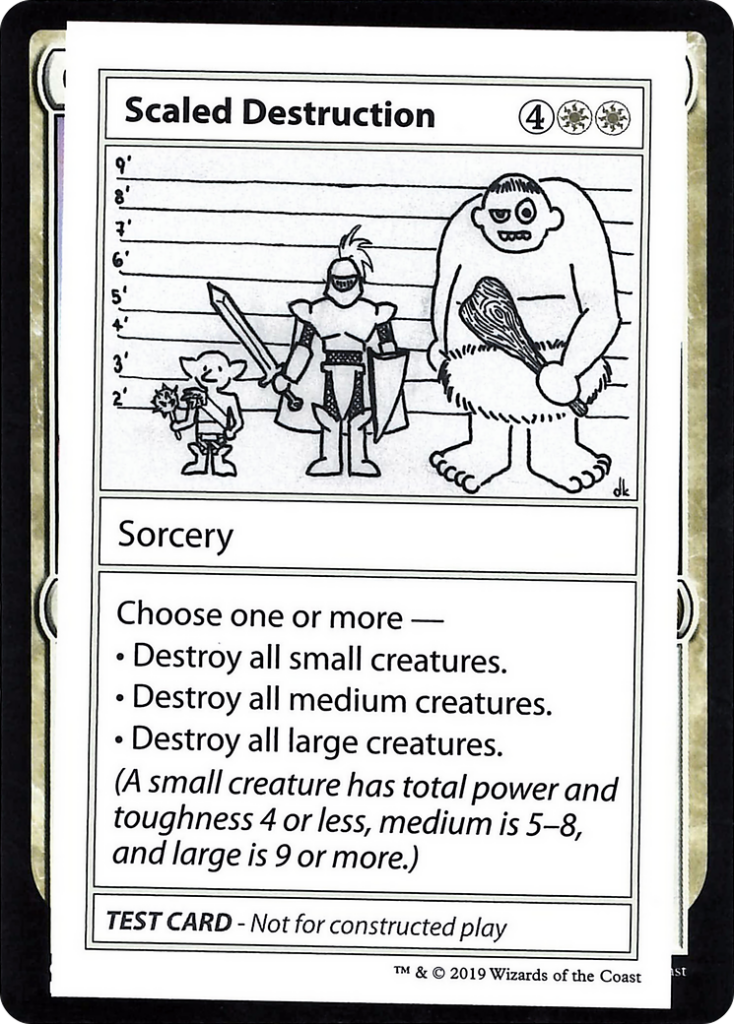 In terms of board wipes, this is very similar to Austere Command. It gives up the flexibility of hitting noncreature permanents in exchange for a finer grain on the mass-murder you commit.

Could: I’m actually onboard with the small/medium/large designation too.

Would: Wizards prints this sort of effect constantly. I’m sure something similar to this is just a matter of time.

Should: Stratifying creatures by power and toughness is on-brand for the color, and you can do a lot with those three buckets in particular. This may be one of the few board wipes that an aggro deck would use, and I love it. 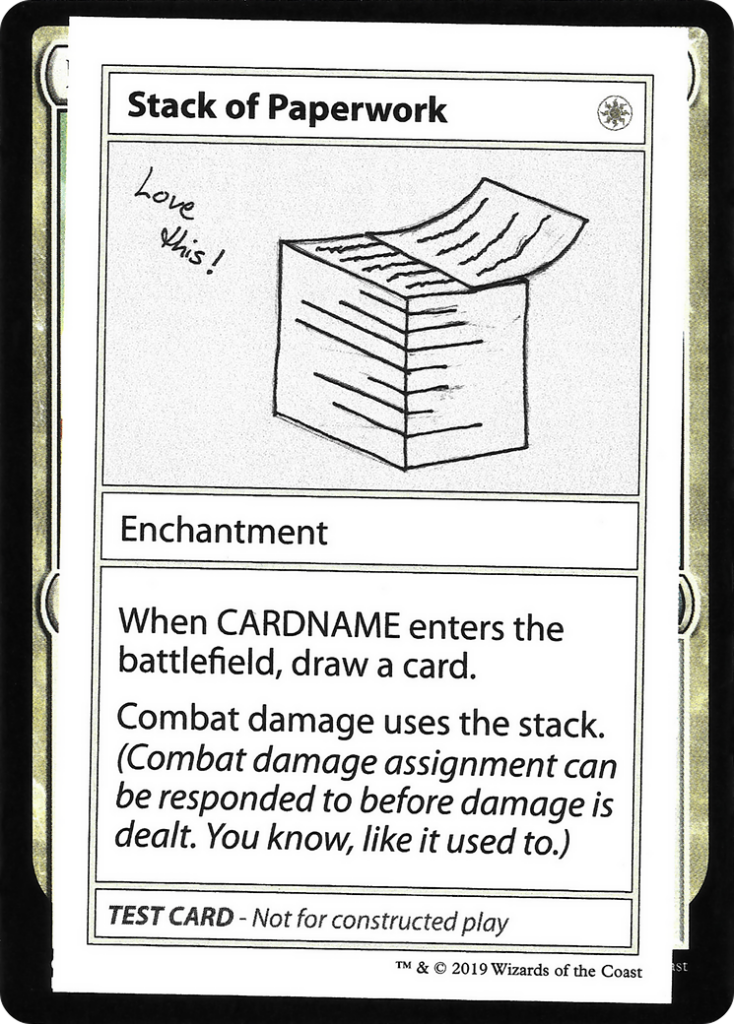 I wasn’t around when damage used the stack, but I assume there was a very good reason the idea was axed in the first place.

Couldn’t: This would basically require its own section in the Comprehensive Rules to be remotely possible.

Wouldn’t: This changes way too many fundamental interactions for Wizards to ever seriously consider. If the Storm Scale measured rules changes, this would be an 11.

Shouldn’t: Why does it have to cantrip, too? 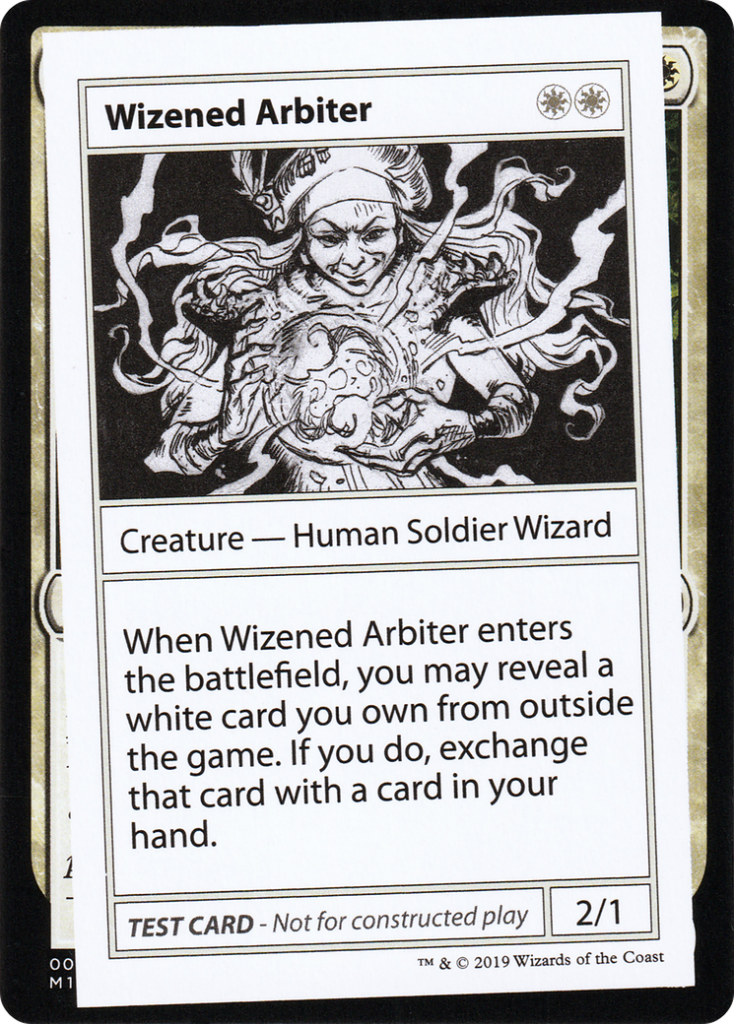 This is way too busted to be on a four-mana creature, let alone one that costs only two. It’s Wish stapled to a creature! Just put a couple copies of Ephemerate and a game-ending combo in the sideboard and you’re all but guaranteed to hit it.

Could: Wizards designed Lesson/Learn, so this is possible…

Wouldn’t: …but even FIRE design isn’t broken enough to let something this strong through.

Shouldn’t: This would be instantly banned in every format it was legal. 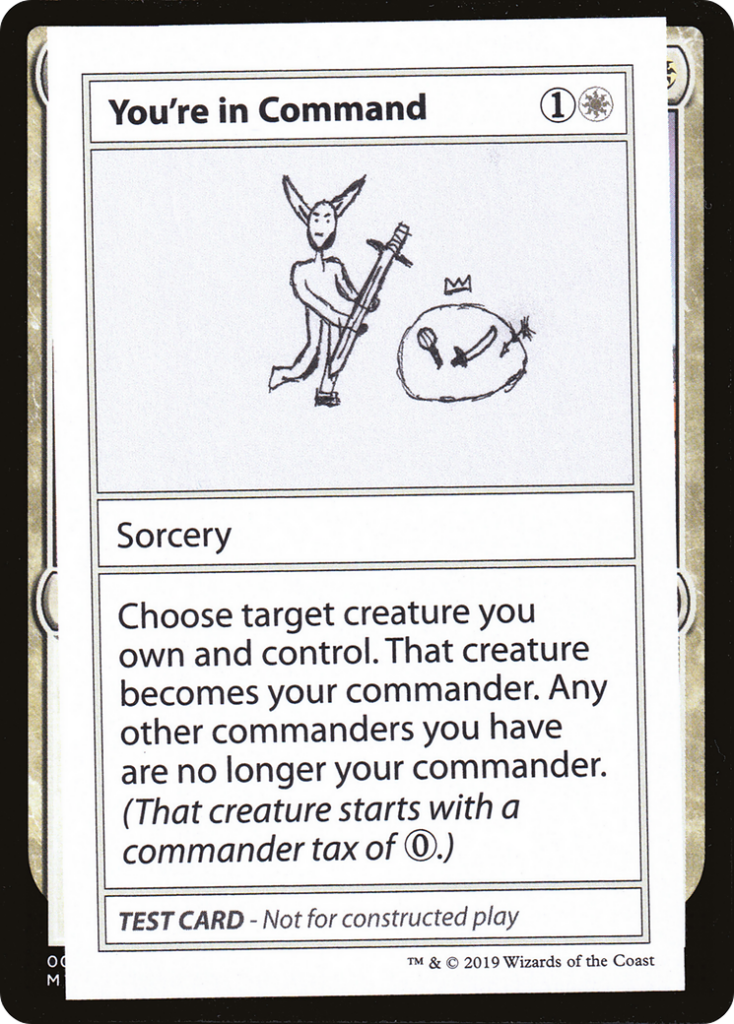 Couldn’t: Unfortunately, Legacy exists, so unless it’s ruled that this card just doesn’t work there, this can’t be printed.

Wouldn’t: Having a nonlegendary creature in the command zone seems like the ultimate taboo. I don’t think Wizards would go there lightly.

Absolutely Should: There are layers and layers of fun to go through. Target a Mutate stack and watch all the creatures become your commander, or Radiant Performer this onto a field full of C17 generals for Eminence tribal. It’s not even like the power level is that absurd, either; you still need to draw this and play the creature you care about and hope it’s not removed in response. If no other card from the white playtest set gets printed, please, let it be this one!

Come back eventually, when I’ll pick another pool of cards to could / would / should. See you!

Newly appointed member of the FDIC and insured up to $150,000 per account, Michael Celani is the member of your playgroup that makes you go "oh no, it's that guy again." He's made a Twitter account @GamesfreakSA as well as other mistakes, and his decks have been featured on places like MTGMuddstah. You can join his Discord at https://discord.gg/xWWqD2G8Fj and vote on which decks you want to see next. In addition to writing, he has a job, other hobbies, and friends.