Welcome back to Battlefield Strategies, the series where we take a look at real-world battles and see if the strategies involved can be implemented on the battlefield of Commander (in this case, Garna EDH).

Today we are going to look at the first battle to ever have details of tactics and formations. It is also thought to be the largest chariot battle ever fought. It is the Battle of Kadesh, fought between the Egyptians and the Hittites. Let’s dive in!

In May 1274 BCE, Ramesses II marched north into Syria with the overall goal of recapturing the town of Amurru. Amurru was a Hittite vassal and their leader, Muwatalli II moved south to intercept the Egyptians. As Ramesses was nearing the city of Kadesh, he ran into two nomads who told him that the Hittites were 200 kilometers away in the area of Aleppo. They claimed that Muwatalli was too scared of the Egyptians to come south. Ramesses decided to set up camp and call for more divisions of chariots as reinforcements. Once the camp was set up, a scout brought him two Hittite soldiers who said that the Hittites were actually just on the other side of the city.

Since the Hittites had better intel that the Egyptians, they had the upper hand. Muwatalli sent 1000 chariots across the Orontes River and into the heart of the resting Egyptians. The chariots quickly broke through the front lines of the Egyptians and quickly moved into the back ranks of the camp. In the process of running through the large and spread out camp, the Hittite charge began to slow. According to his writings, Ramesses found himself completely surrounded without a single soul to help him. He ended up fighting his way out of the initial attack and charged forward, rallying his men. He personally led multiple charges into the Hittite chariot lines. The Hittites believed the battle was already essentially over and the Egyptians were routed and fleeing. Because of this, many of them were already looting the camps and became easy pickings for the rallied Egyptian chariots who pursued them back across the river picking off many of the heavier Hittite chariots.

Muwatalli wasn’t done yet, however, and ordered another 1000 chariots to charge into Ramesses. This time, he stiffened the charge by also sending in the nobles who protected the king. Hoping their discipline would spread to his men. This charge was successful initially, however, just as the Hittite forces once again reached the Egyptian camp, the reinforcements that Ramesses had called for arrived from the rear of the HIttites threatening to cut them off. The Hittites retreated, many abandoning their chariots and attempting to swim across the river. Most were unsuccessful. Muwatalli retreated, but Ramesses had too few forces to continue any campaign to take any cities. The Egyptians claimed victory in their writings, but most scholars consider it to have been a draw and some even claiming that Egypt was the loser. However you spin it, We have a good strategy to look at today. 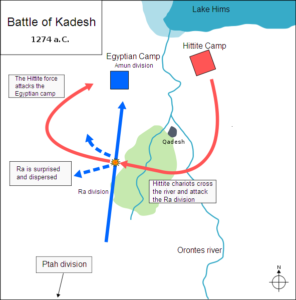 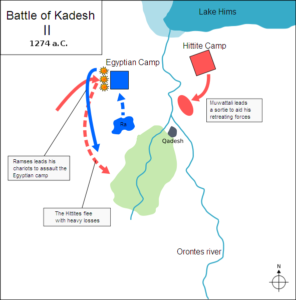 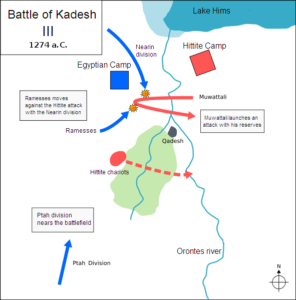 Before we talk about the deck, I want to take some time to really dig down with this strategy. Ultimately it preys upon overconfidence. I want to warn Commander players out there that EDH is a game of huge swings. We need to be sure to never assume victory is at hand. The tides can turn against us in the blink of an eye. You may have the board locked down with victory seeming certain and then BOOM! Cyclonic Rift gets overloaded and you’re discarding ¾ of your permanents at the end of your turn. Or maybe the Karn player drops an All is Dust and a new archenemy is made except no one has the power to withstand them. Both of these plays are very common in the Commander world and we need to play with that scenario in mind. Now, on to the deck!

Bringing Them Back in Garna EDH

Our deck today takes the battle of Kadesh and leans into an opossum tactic. We want to force a board wipe and use it to our advantage. To accomplish this, we will be needing the assistance of our commander, Garna, the Bloodflame. Basically, what Garna EDH wants to do is ensure enough pressure is on the board to force our opponents to cast a Wrath effect. Once they do, we flash in Garna, and get every creature that was on our board back into our hand. We then use a plethora of mana ramp abilities to put our creatures back on the board and swing (hopefully for the victory) using the haste-granting ability of Garna. If we don’t have access to our commander, we have a few back up plans to help with this. Rise of the Dark Realms takes everything that died in the wrath (ours and our opponents’) and puts them directly into play on our side. The biggest problem with Rise is that it is a sorcery and so we wouldn’t have quite as much flexibility as we would with Garna. We can also use Balthor the Defiled to get back all of our creatures. Especially for Garna EDH, we just need to keep in mind what colors our opponents are playing.

So if the whole strategy of Garna EDH is to try to force our opponent to wipe the board, we should probably make sure we have enough threats to force our opponent’s hand. Grave Titan is a “not so secret” army in a can. If it is not dealt with, it will easily take over the game. The same goes for the other Rakdos titan Inferno Titan. A six-mana swing for nine is probably the least effective thing the red titan can do. Anyone who has played against him without removal can attest to that. Drakuseth, Maw of Flames is Inferno Titan up to 11. Sure, he can’t split the damage which is a big downside, but everything else is just…bigger.

Once we get that board wiped and put all those creatures back into our hand, we are going to need to accomplish the other half of the Garna EDH plan and produce the mana to put everything back onto the battlefield. We are keeping some big mana creatures to help with that. Cards like Priest of Gix and Priest of Urabrask are essentially free once they hit the board. While they aren’t the largest or the most cost-effective for their stats, a free creature is a free creature and the many victims of Dredge players know this fact well.

The most obvious way for Rakdos to accumulate large amounts of mana is Treasure tokens. We will start with the $60 Goblin Pirate in the room.  Dockside Extortionist can be an absolute all-star in this deck. If you are able to get that effect multiple times in a game, I don’t see how you would have a hard time winning. To go right alongside him, we have  Goldspan Dragon to make all of our Treasure work overtime. Probably the best mana maker for a deck that wants things to die en masse multiple times is  Black Market. When we successfully get our opponents to wipe the board, we get a permanent black mana at the start of each of our turns, FOR EACH CREATURE THAT DIED! That is just some good rates right there! When our mana producers come alive, we have no shortage for doing the things we want.

And that’s Garna EDH! That’s all we have for today! I look forward to seeing you all again. Adios!

Am I The Bolas? – Deutsche Königsmacherei!

How They Brew It – Belzencombo