I'm Mark Carbonza! I'm New Capenna's crackup wiseguy comedian who doesn't do crowd work because you never know if a demon's going to hate the jokes. (I'm writing this so far ahead of New Capenna, I know nothing!) 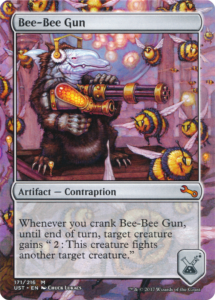 This week, a message about prioritizing your most valuable resource!

DEAREST MARK, WHAT TIME IS IT?

“Am I the Bolas for eliminating the person playing slowly?”

Player A, who shall remain nameless, was playing a deck with a fair amount of activated abilities and decision points. As the game wore on, their turns turned into 10 - 15 minute affairs. I totally get being in the tank on particularly meaningful turns, but if every turn is particularly meaningful, none of them are, and you can only look at the same 3 cards in your hand so many times.

The game had come to a point that they had the weakest board state and it didn’t make sense to take them out, but instead of taking out the actual threat/allying with Player A, I and another player both decided without actually saying anything that we were willing to give up quite a few percentage points to speed up the game. Player A wasn't angry about it (I don’t think they realized why they were getting killed), but it didn’t seem helpful to bring up because a) it’s already been brought up multiple times and b) they are a real-life friend outside of playing Magic together and it doesn’t seem worth it.

Player A is relatively new but concerned with having to know what everything on board is doing. That’s fine. However, when you’re playing a deck that is just trying to goldfish, there really isn’t much to measure most turns. The other player and I made the determination, kind of psychically, to attempt to run them down. Are we the Bolas?

WELL, IT'S ABOUT THAT TIME

Hello, So Long, and thank you for writing in. I always appreciate folks trusting me with their stories.

I have to admit, this one made me laugh. I cannot for the life of me imagine someone literally taking 15 minutes every turn. Barring set-up turns, I assume, that probably means that by turn 6 or 7, you've spent an hour of the game on Player A's turns? That's a lot. Especially if you consider that to be half or even more than half of the game by some people's standards.

I understand wanting to make the right play and mapping things out. I understand wanting to win badly enough to spend all that time working on it when it's a game-deciding turn, but if you've brought it up to them several times and nothing has changed, in-game actions are bound to have to speak for you. Targeting them to get a move on the games feels like a fine idea when no other compromise has been reached.

I'll say this: I feel like the ideal game goes for 90 minutes. Anything stretching things out beyond 90 had better be exciting or the writing should be on the wall. Maybe we hit two hours and it's over, but if we can have two solid and eventful games in three hours, I'm a happy camper. When games go longer than that, it is becomes very difficult to justify staying in it.

Fifteen-minute-long turns are brutal when they're necessary, let alone when they're just another run around the table. Does this player do this while playing decks that are "brain-off" builds?

I don't think you're the Bolas here. I can say that pretty confidently after writing all this, but I definitely think there's got to be something else that can be done about them taking 15-minute turns. I'm almost wondering if a chess clock or something should be implemented in this case.

I also want to say that it's cool as hell that you and a buddy at the table can, without speaking, be entirely on the same page and team up toward an unspoken yet understood goal.

Thanks again for writing in! If you, the reader, have a story to share, please don't hesitate and get in my emails! MarkCarbonza@gmail.com awaits you!

Also, comment below with your ideal game lengths! I'm curious!