Sure, there are the few among us who prefer to talk about new cards, but with every new card comes more words to read, art to memorize, and interactions to explore. Wouldn't you rather just never have to learn new things? Doesn't that sound nice?

So while my fellow writers were off picking through all the recently revealed and soon-to-be released cards from Dominaria United, I instead did not do that, so let's talk about cards we already know. Today, we're covering reprints in Dominaria United, but between the new set and its accompanying Dominaria United Commander, there are 165 reprints, not counting basic lands. We will be discussing, uh, less than that.

In the standard set of Dominaria United, 22 cards were printed that have existed in some form or another previously (again, not counting basic lands). When it comes to reprints, DMU is quite top-heavy, as we'll see, but even among the draft fodder commons, there's still some nuggets of discussion to be had.

Liliana of the Veil

Technically, Liliana of the Veil was reprinted not once, but twice in Dominaria United, once in a regular frame with art by Martina Fačková and once in showcase form by some guy named Gerald. Both new renditions of Magic's premiere morally conflicted necromancer sport fantastic updates over Steve Argyle's now-iconic (and until now, only) version of the card. Let's discuss one at a time.

First off, we've got Martina Fačková's version: a stunning, near-photorealistic depiction of the character that tells her story: 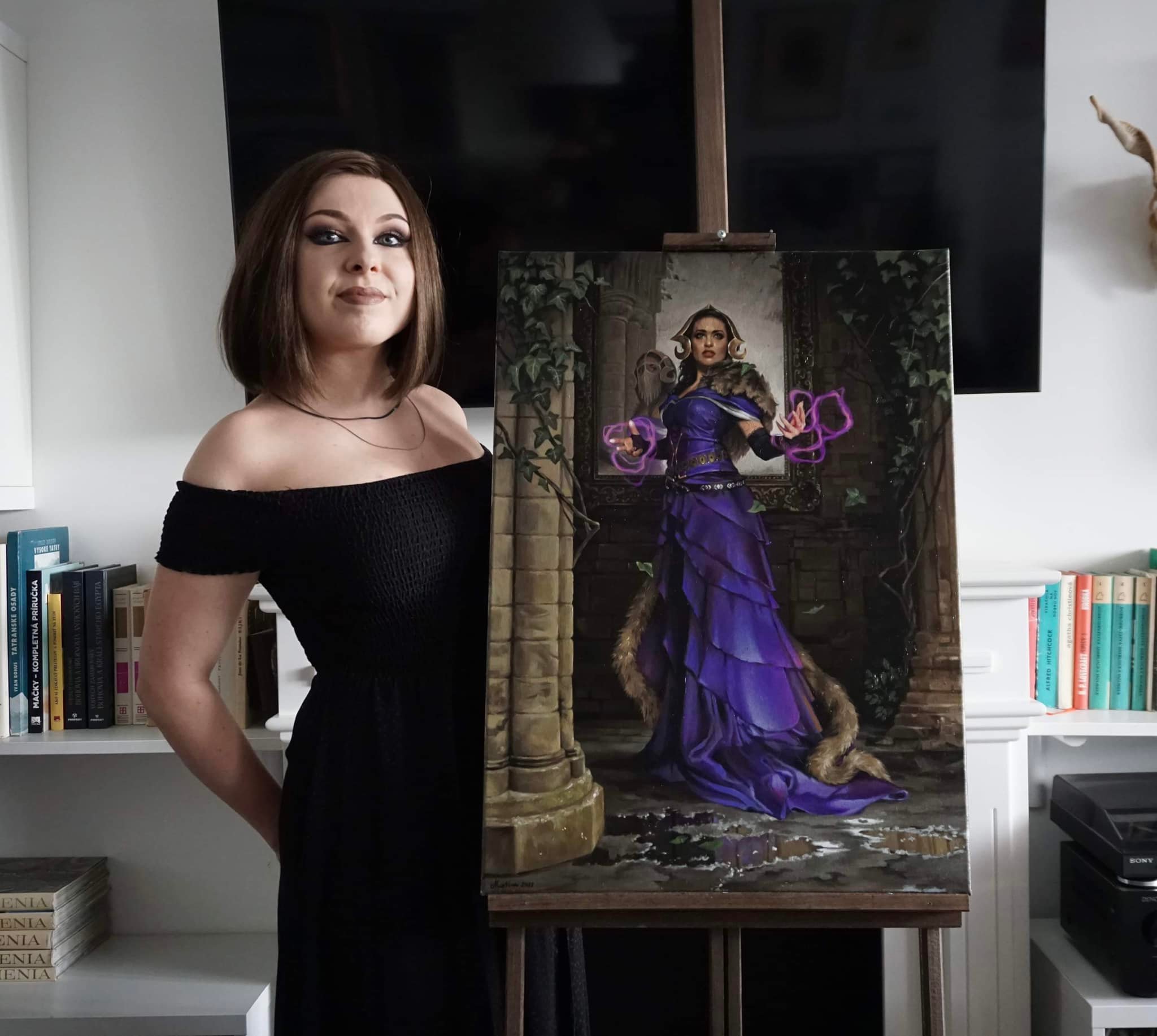 The version we see here, done in oils, is not the same art we see on the card. After Fačková created the art for the card itself digitally, she did a one-to-one repaint from scratch -- and will never do it again. That promise of exclusivity might be why the art we see above went for a hair above $25,000 in auction earlier this month. 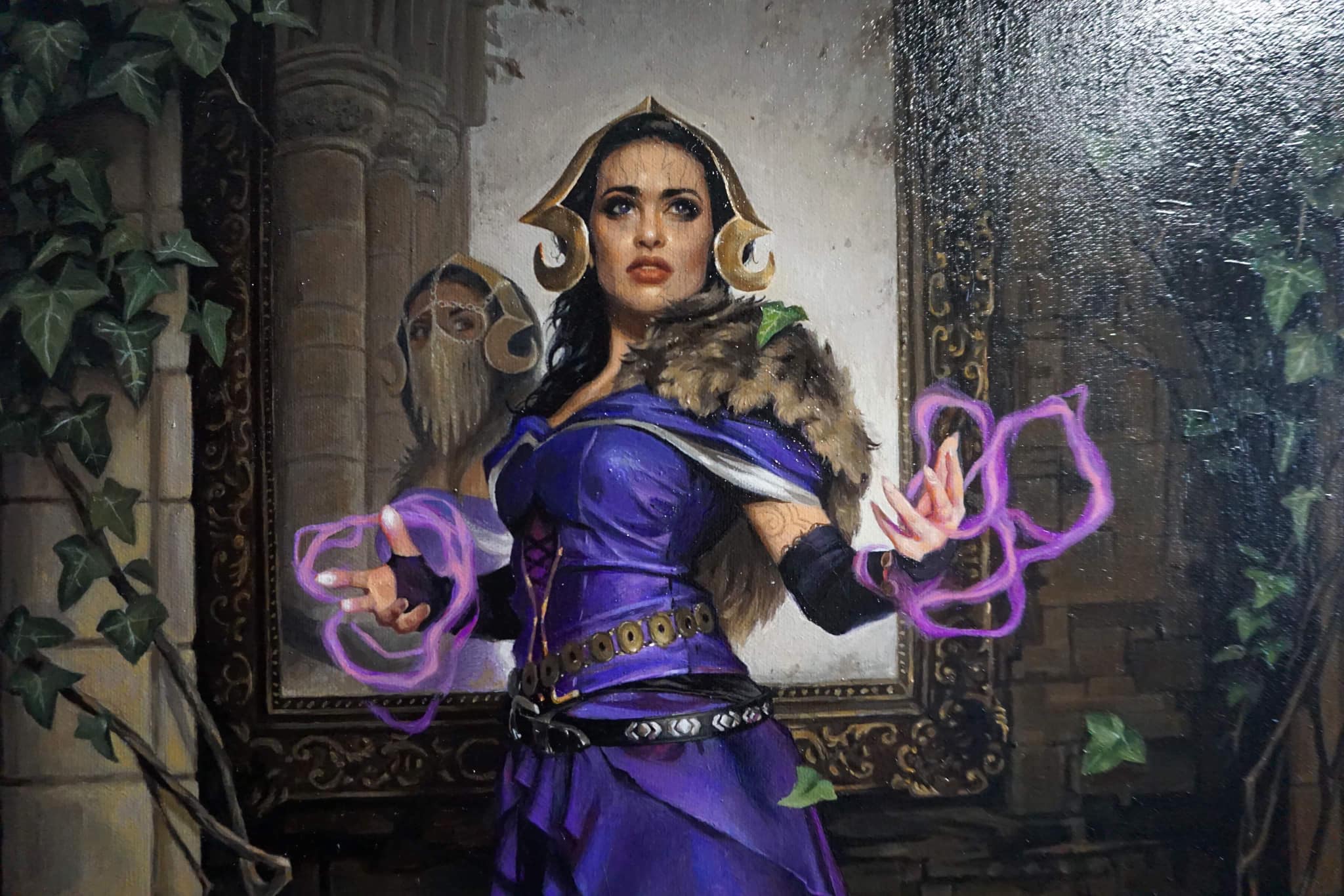 The art for the borderless showcase version of the card was created by the singular and indelible Brom. Brom's take shows Liliana from another period in her life: self-confident, severe, and authoritative, this Liliana has more of the peremptory vibe of the earliest iteration of the character, Liliana Vess, way back in Lorwyn. Brom, of course, has only just made his return to illustrating for Magic after quite the hiatus. Similarly to Liliana, he provided borderless showcase art for Tasha, the Witch Queen from Commander Legends: Battle for Baldur's Gate (with the regular version also done by Martina Fačková), a set that feels years-old but in fact came out two months ago. Before Tasha, we hadn't seen new Brom art since Glissa Sunseeker -- that's 19 years.

Of course, as is often the case in the perpetual tire fire called the internet, both new versions of Liliana of the Veil were met with some vitriol among certain members of the playership. Martina Fačková's art is "too realistic" or "CGI", while Brom's take is too "old." Are these complaints just code for "I've spent years lecherously leering at the original art and now I'm mad the character looks more like an actual human person"? I can't say, but I do know a lot's changed in Magic, and the world, in the decade since we first saw the original printing way back in Innistrad. Art is subjective, and thus one's opinion on art's effect on their emotions is mostly beyond reproach. But just be honest with everybody (and yourself) when you're discussing it.

The painlands are back, mostly. While the true cycle of the lands number 10, we're only getting six here in Dominaria United, presumably because we'll get the rest in The Brothers' War or subsequent sets, and like Liliana above, each also comes with a fancy borderless version. This new art is the first facelift for some the enemy-paired painlands, like Caves of Koilos, since they first appeared in Apocalyse in 2001. The allied-pairs, however, like Karplusan Forest, got their start in 1995 in Ice Age.

Probably the most popular dual-land cycle not involving shocking, fetching, or second mortgages, the painlands have long been a mainstay at Commander tables for decades, so it's certainly nice to see them again. And with their ubiquitousness, and many, many previous printings, you can get something like, say, Yavimaya Coast for either $220 for an Apocalypse foil, or two quarters for its Magic Origins version.

And speaking of showing off, let's talk about those borderless versions. Similar to how borderless reprints have been handled in recent sets, several of the treatments were provided by long-time veteran artists. Mark Poole, Mark Tedin, Donato Giancola, Randy Gallegos, Lars Grant-West, and Rob Alexander offered their takes on the classic land cycle -- a significant group of artists, considering that between them, they've supplied roughly 1,145 unique pieces of art for Magic over the past three decades.

It's also worth noting that Bruce Brenneise's version of Sulfurous Springs is a callback to the card's original art, provided by Phil Foglio -- I too am reluctant to dislodge myself from a hot tub.

The first version of Impulse came to us with the release of Visions in February, 1997 as an old man with an overstuffed backpack, before the card saw its first new art thanks to Izzy Medrano and From the Vault: Twenty in 2013. None of its previous printings, however, have been Standard- (or Modern-) legal since that original Visions version in 1997, so blue players are understandably excited. There have been plenty of Impulse-adjacent spells in the last 25 years, but never actual Impulse.

And with a new printing, we get new art, courtesy of Sam Guay. Impulse marks the sixth card illustrated by Guay, an artist based in New England (and of no relation to Rebecca Guay).

Guay described the art as "aggressive pastel and squiggle textures" and as per a listing for the original art auction, a miscommunication led to Guay painting Teferi with longer hair than expected -- the final was digitally edited for the card, but Guay fixed the original painting to match.

You may remember Griffin Protector from Magic 2015 or Core Set 2020 as that white common flyer you pick up in draft around pick eight or nine. The reason why we're singling it out here has nothing to do with Limited and certainly nothing to do with Commander outside of very niche Griffin tribal Zuberi, Golden Feather decks or what will likely be just as niche Zeriam, Golden Wind decks. We're talking about it here because of Omar Rayyan.

Since 2007, Rayyan has provided the art for 23 cards, starting with Future Sight's Mistmeadow Skulk. Rayyan's style is immediately recognizable and was tailor-made for Lorwyn's story-book aesthetic, the set for which he provided the bulk of his work for Magic. Since the Lorwyn-Shadowmoor block (which we've discussed in very granular detail here) he's done a few Planechase plane cards, two showcase cards from Throne of Eldraine and a special Snow-Covered Forest from Kaldheim.

That brings us to the Griffin, but not really. This is really just an excuse to tell you to go buy Goblin Market, Rayyan's book of illustrations based around a 19th-century poem. It's got more than 100 drawings and paintings by Rayyan in it, so if you're a fan of his 23 cards, go buy it.

One of my favorite things each spoiler season (and why I'm writing these articles to begin with) is discovering a reprint of an obscure common from decades ago sneaking into a new set. That's what we have here with Gaea's Might.

You're forgiven if you didn't realize that this was a reprint. It's only ever existed once before, as a common from Planeshift which was released in February of 2001. With the return of Domain as a keyword, a reprint of Gaea's Might provides an opportunity to simplify the text of the original version, which was Domain before Domain existed. And by "simplify," I mean adding the word Domain but leaving the rest of the text as is. They did, however, swap out flavor text of Multani "straining at a load" in favor of a forest-flavored platitude.

Our new version's art is courtesy of Alex Negrea, a Canadian artist who before Dominaria United had one card, Diregraf Horde, from Innistrad: Midnight Hunt. Along with Gaea's Might, DMU also provided Negrea with the chance to interpret Magic's most famous blond, four-armed goofball in Ertai's Scorn.

That original art, by the way, was courtesy of Ron Spencer, one of Magic's most prolific artists of all time. He's responsible for the art on around 250 cards starting from the beginning in Alpha. It has been nice to see Spencer return to the game, providing borderless showcase versions of a number of cards from the past two Double Masters sets, because before that we haven't seen him since Magic 2011's Crystal Ball. A fun fact about Ron Spencer: he is famous for hiding names of friends and family in his art. I don't know if there's one such Easter Egg in his version of Gaea's Might, but I can't say there isn't. Stare at it for a few hours and report back.

The Rest of the Reprints

And there you have it: for a set so intrinsically tied to Magic's past, the number of impactful and interesting reprints wasn't exactly mind-blowing, but we did get a few gems along with the return of some great artists, new and old. We also got an artist misattribution, as Heroic Charge was not painted by Paul Canavan, as identified on the card. It's actually Zoltan Boros, which makes sense given the card's color identity.

So what's your favorite of the new versions we've seen here?