Ed Beard, Jr. is responsible for some iconic art.

One of Magic: the Gathering's most recognizable villains, Nicol Bolas, was first presented to players as a Grixis-colored bookworm thanks to Beard nearly 30 years ago. In fact, Beard was the artist of four of the five Legends Dragons, a cycle of creatures that hold a special place in the hearts of Commander players as the original "Elder Dragons" of Elder Dragon Highlander, more commonly known as EDH. In total, Beard's created the art for 125 cards, including some commonly seen cards in the format, such as Reki, the History of Kamigawa and the Seventh Edition version of Birds of Paradise. 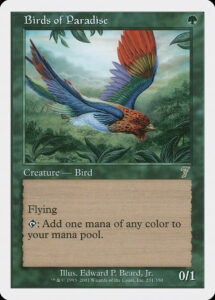 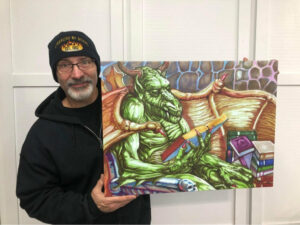 To say he's had an impact on the game is an understatement, and while we haven't seen new Ed Beard art grace a Magic card since 2005, with a trio of cards from Ravnica: City of Guilds, he's been busy. Beard's lent his artistic talents to everything from "jigsaw puzzles that you find in Walmarts and Targets," to clothing for The Mountain apparel company, "cell phones, tin signs, figurines, license plates, collector mugs, glasses -- you name it," Beard said. He also keeps a regular touring schedule, attending galleries at various Renaissance Fairs across the country as well as comic book shows.

In 2011, Beard "returned to his roots" as a custom airbrush automotive painter and customizer. Beard said he started in the late 70s airbrushing custom art on "hot rod vans, motorcycles[,] and such," a practice he continued through the 80s. "My son and I built a hot rod van from what was our cargo van that we used from the year 2000 until it hit 265,000 miles on the odometer in 2011," Beard said. "I was ready to go to the junkyard with it. We literally resurrected it into what is (now) known as the 'Dragon Lord Van.'" 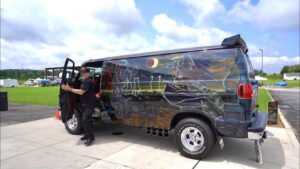 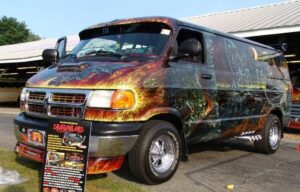 In its new life, the Dragon Lord Van has traveled across the country and has been to various shows, including Columbus, Ohio's Origins Game Fair. "It was featured in the main gaming exhibit hall, then it went on to Sema, the 'Super Bowl' of supercars and custom cars -- it's the premier trade show for the automotive aftermarket industry -- as the featured vehicle for PPG paints in Las Vegas, Nevada and has been featured on various automotive hot rod network TV shows, like MAV TV," he said. Every year since, Beard creates a new airbrushed and hand-painted artwork to be featured in national car-and-truck shows. He also produces original art commissions for collectors.

In other words, he's a busy man. So much so that he stopped signing Magic cards through the mail, a service he discontinued several years ago for logistical reasons. But the demand from players and collectors for signatures has only increased, and while Beard is happy to sign a card or two at events he's attending, he's got a new endeavor aimed to parlay that demand into charitable giving. That's where Matthew Schneider comes in.

Schneider is the Florida-based artist agent behind the MountainMage MTG Signature Service, which has connected players with artists via scheduled mail-in signings since 2016. "In late 2017, I realized I had a decent number of members, and I thought maybe I could give back to the community," he said. Schneider conferred with his wife, who works for the Florence Fuller Child Development Centers, an educational nonprofit focused on children from economically challenged families. They came up with an idea for a raffle, and shortly after, Schneider asked for prize donations from artists and collectors he worked with, and even donated pieces himself to the cause. "That first year, we raised I think $900," he said.

An admirable total, generated through nothing but the generosity of fans and creators of Magic: the Gathering art. But every year since, around Christmas, MountainMage holds a new raffle -- and that first year's total, Schneider said, was by far the lowest. "In 2018, we raised $2,000," he said, doubling the group's contribution in just a year's time. The third year, 2019, "was a bit of an outlier," Schneider said, as the group raised $3,800, nearly doubling the donation again, but an anonymous donor kicked in an additional $2,400. "(The donor) didn't want any tickets though, just being generous," said Schneider.

In 2020, MountainMage raised $5,320, and just a few months ago, for 2021's raffle, Schneider said they were able to surpass even 2019's total, including the anonymous donation, for a total of $7,500. "All the prizes are donated by my customers, some from folks on Twitter, and the rest directly from artists, either that I work with or who heard about it from other artists on social media," he said. "Ed Beard was one of those." 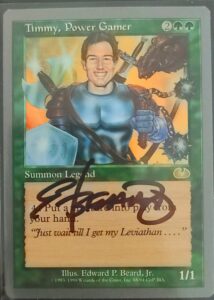 Beard said he was aware of the fact his signature was adding value to cards, especially after he stopped signing via mail eight years ago. Before he stopped, he was signing through the mail for 20 years, for free. "I watched as they continued to climb, watching the eBay, Amazon[,] or other auctions of my signed vs. non-signed cards increase in value, especially cards such as Birds of Paradise, APAC land cards, Nicol Bolas[,] and others," he said. "I continue to receive a steady inquiry from hundreds of people every month asking to have their cards signed." Due to his schedule, continuing to sign via the mail for free became "logistically impossible" as he's on the road attending various conventions and renaissance festivals 10 months out of the year, and when he's not traveling, he said, he devotes any free time to his family. 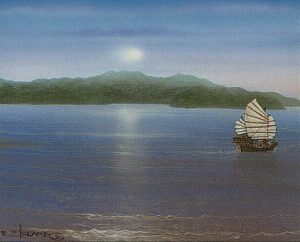 Beard's known Schneider for "several years now," and in the past has donated items to the raffle, and charity isn't rare for Beard otherwise -- each year, he participates in a number of charities. Beard's organized and hosted live drawing demonstrations at comic conventions to raise money for worthy causes, like Children's Hospital and the Make-A-Wish Foundation, but with the pandemic closing down many in-person events, Beard said he was on the lookout for "an alternative online way" to continue assisting nonprofit organizations, and "Matthew came to mind." Beard said he reached out to Schneider "independently of any raffle he was doing -- however, it all worked out perfectly as a coordinated effort."

Together with Schneider, a special raffle was devised outside of MountainMage's annual holiday fundraiser last month. "I felt that this special arrangement with Matthew could provide an opportunity to benefit the charity and address the many inquiries I receive," said Beard. "My Magic signed cards and limited edition prints present a fundraising opportunity to fundraise for nonprofits, and at the same time creating a limited number of cards and prints that would maintain the high collectible value that they currently command and not flood the market." 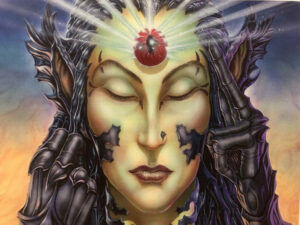 The special raffle, which recently came to its conclusion, was capped at 50 winners and four cards per winner. Beard donated 100% of all signing fees as well as all profits from hand-signed and numbered prints after production costs. While exact totals are still being calculated, Schneider estimates they've been able to raise between $2,400 and $3,900.

Beard is certainly appreciative of having the chance to use his creations to raise money for charities nearly three decades on. "I'm grateful and humbled," he said, before adding, "and I must say I never imagined that back in 1993, when I was first approached by at that time a little-known company called Wizards of the Coast, that nearly 30 years later my work on those early cards would have a nostalgic draw with what amounts to three generations of gamers." 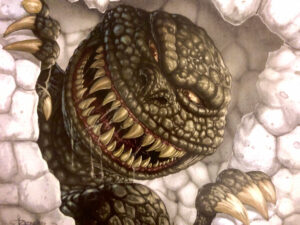 To keep up-to-date with his fans and collectors outside of his charity work, Beard's started a Patreon page that's been "going strong" for more than a year. Through his Patreon, Beard hosts live, 2-3 hour art demonstrations that incorporate everything from drawing and painting to airbrushing. Each episode also features "sneak peeks" and special gift giveaways. The page also offers "a variety of tiers," he said, which come with special perks, such as limited prints all the way up to original art. More information on Beard's art and schedule can also be found on his website.

As for Schneider, MountainMage has grown to be quite the enterprise, with approximately 115 past and current Magic artists offering signatures, artist proofs, and alters through the service. On average, Schneider receives roughly 7-10,000 cards per signing batch, which takes place four times per year. For more information, contact Schneider through the MountainMage Facebook page or the newly launched website. Spirited Away: Aminatou, the Fateshifter