When Ben Schnuck learned that his "Shades Not Included" Secret Lair was revealed to the public, he was in class.

The 21-year-old student at the University of North Texas was keeping that Secret Lair secret for 10 months, a "hellish" time waiting for the official announcement "without being able to tell anyone," he said.

Schnuck, who double-majors in computer engineering and mathematics, combines his areas of study with his love of art to create synthwave Tron-scapes at home on a Kiile album cover. But with the announcement of the upcoming Secret Lair featuring Schnuck's retro-futurist aesthetic, his art finds a home in Magic: the Gathering.

A self-professed "STEM nerd," Schuck said it surprises many when they learn he's "far from being primarily an artist" in life. "Seeing my art in marketing and announcements has been surreal," he said. "The entire day of the announcement, I was refreshing Scryfall searching for my name until it finally popped up."

"I have the search bookmarked, because it means so much to me."

Sitting in class, he learned that an IGN article detailing the most recent Secret Lair collection was published -- with his among them. "I straight-up grabbed my stuff and ran out." 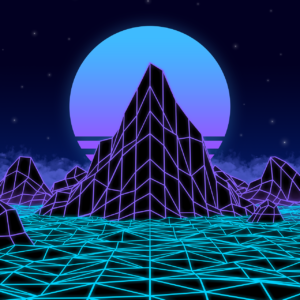 At the height of the COVID-19 pandemic, Schnuck found himself in quarantine, but as was the experience of thousands of Magic players throughout the world, the desire to keep playing didn't subside with the restrictions on gatherings.

And like many others, Schnuck took to webcam Magic.

He said he started playing the game with the release of Core Set 2020, first landing in Commander before treading into the choppier waters of cEDH. From there, he's "settled on Modern," most frequently piloting Living End, as well as Lantern Control, 8Rack, and Jeskai Phoenix. But it was Commander, specifically competitive Commander, that first compelled him to create proxies in what has become his distinctive synthwave style.

As a member of the Playing With Power cEDH Discord webcam league, he said he wanted to "stand out" in games through the camera while he was sequestered at home. "I originally designed an edit of my commander, The First Sliver, which I really liked," he said. "But in order to make the print run happen, I needed to print 11 cards minimum." While he admits he could have just printed 11 copies of his version of The First Sliver, "I figured, with nothing better to do, I'd make special versions of a bunch of cards that I use, just for fun."

His "special versions" became a hit with many people he'd battled via webcam, so he created a Twitter account to share the art with a wider audience, "and the rest is history," he said. 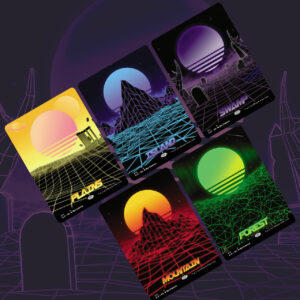 Even with a Twitter account for his art, the artist behind the visuals was still somewhat of a mystery.

He said that, until recently, he'd been "pretty anonymous" on his Twitter account, not posting a photo of himself until it became necessary to facilitate meeting up with people at MagicFest Las Vegas in November 2021. By then, he had already created the art that would be featured in his Secret Lair collection, confidential information figuratively burning a hole in his pocket.

Months prior, in the spring of 2021, he received a Twitter DM from what appeared to be a hardly used account. The owner of that account, however, was Tom Jenkot, Principal Art Director for the Secret Lair and Booster Fun programs, who had an idea to pitch. Schnuck said Jenkot reached out via Twitter because, "since I was merely a hobbyist/fan artist, I didn't advertise a business email on my account."

After they connected, Schnuck worked directly with Jenkot to craft what would eventually become the Secret Lair. "Tom was an absolute pleasure to work with," said Schnuck. "He was kind, patient, and understanding with me." This was the first commercial art work that Schnuck's ever done, so "Tom's patience meant so much to me, and I learned so much through him."

The process to create the Secret Lair began in May of 2021, and Schnuck wrapped up the final versions of the art in mid-August. "Despite that timetable, I only really started working at around the end of June, so I had something like five weeks to get all the pieces done," he said. "I originally created synthwave basics as proxies back at the beginning of 2021, and Wizards wanted the same style, but on official cards, which was a blast."

Since he'd been honing that style for the better part of a year, he had gained some notoriety in the community for his synthwave-esque proxies and fan art versions of cards. So much so that combined with his relative social media anonymity, created a bit of a misunderstanding when his Secret Lair was revealed to the public last month. "No one on Twitter knew my real name, so everyone's initial reaction was that Wizards stole my style and are ripping me off for profit," Schnuck said.

Following the official reveal through the IGN article, Schuck took to Twitter to do a sort of reveal of his own, announcing that no, Wizards did not steal his art. It was actually his art on the Secret Lair cards. "Many of the tweets made before my announcement are still up from friends of mine just absolutely tearing into WotC for stealing my concept, which I find absolutely hilarious and it makes me feel so loved," he said. "Of course, after the clarification, it was all celebration."

Schnuck said he'll "never forget that day," nor the many messages of support and love he received from friends and fans. "It was the absolute best."

While Schnuck's road to becoming an official artist for Magic: the Gathering might be unique, he comes from a growing community of proxy and alter artists, and with Schuck's Secret Lair, it appears that Wizards is embracing that community.

"My biggest message to anyone out there who's looking to create is to seriously just do it," he said. "I know that's the message that most artists give, but it took me a long time to consider myself an artist." It's all about expressing oneself creatively, he said, detailing other avenues of expression he's dabbled in, which includes music, video creation, and writing -- all outlets that he said he plans to eventually return to, now that he's got a wider audience. "Anyone can do what I do, seriously," he said. "I'm so outrageously lucky by this opportunity and I want more folks to get the opportunity I got."

Currently, Schnuck is still basking in the glow of the warm reception of the Secret Lair, and he said his future is bright. But he hopes that his work with Wizards might continue. "I hope that I keep making things that can break the boundaries of what a Magic card is," he said. "For the time being, I'm going to be making art and tokens for those that like what I do."

That double-major in university understandably demands a significant portion of his time, but knowing that there's a lot of "excitement and love" for what his art, "I can't let anyone down." 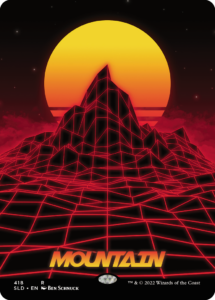 Ben Schnuck can be found on Twitter (@BenMakesStuff) and on Instagram (@BenMakesMagic). He's also got a website and a Patreon. Fans of Schnuck's art can find him at the upcoming SCGCON in Dallas on April 8-10, as well as at "some sort of signing event" at his local game store Stellarfly when people receive their Secret Lairs -- sales of which end on Friday at 12 p.m. EST. 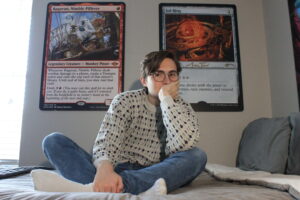