As you might recall from our last chat, Urza is stuck on our plane and is confused about how things here seem to work. This world’s mechanics are different than those of his home plane, and any other plane he has been to for that matter. So, here we are, hosting a science fair to help him orient himself to Earth.

Welcome back to Urza’s Science Fair, the series where we take a look at iconic cards or interactions from Magic the Gathering and see how they fare with Earthly science. In the last article, we looked at the iconic “Bolt the Bird” phrase to see if a Lightning Bolt on Earth would hit a Birds of Paradise as often as it does in Magic. Today, we are going to examine real-life Clones and see how they match up to what Urza expects.

The Science of Magic: Clones

Urza tells us about how cloning works where he comes from — apparently, it is as easy as summoning a creature, like the classic Clone, that takes the characteristics of another creature immediately. Instantly getting a copy of another creature could have huge implications, according to Urza. It is possible to take advantage of some immediate effect, like a Reclamation Sage, or of getting some long-lasting advantage, like Muldrotha, the Gravetide. I don’t know much about these specifics that Urza mentioned but imagine the possibilities…  Need to get a cat out of the tree? Summon a clone of a giraffe! Need a ride to work? Summon a clone of a horse! Of course, though, nothing is that easy on Earth so lets tell Urza how things work around here.

Urza, just like many of us, learned early on that all humans are about 99.9% alike and that all of our differences only come from the remaining 0.1%. Our genes are what tell our bodies how to grow from the moment our first cell is made. They are why we have a certain height, eye color, and hair color. They are responsible for making us unique right from the start. But, they are also the reason we have a liver, heart, two nostrils, and all of the other things that make us human. Nearly all of our genetic makeup is used to make us human, that last 1% is what separates me from you, and you from Urza.

Scientists define a clone as an animal (or, person) that is 100% genetically identical to another animal. Urza is happy to hear that we have clones here on Earth, in fact, you may know a clone. Identical twins are genetically identical to one another effectively making them clones. Of course, we cannot control when twins are “clones” of each other so this doesn’t really compare with what Urza is talking about. Instead of hearing about an Evil Twin, Urza wants to know about how we make Clones. 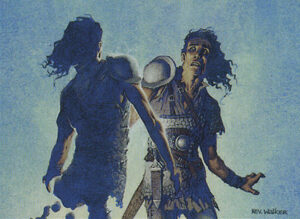 Cloning on Earth didn’t start until three years after it did in Magic. It was 1996 before researchers saw the first birth of a cloned animal, the now-famous lamb, Dolly. For over a decade prior to Dolly’s birth, researchers have been successfully able to split the embryos of mice before they are born, essentially forcing the birth to be identical twin mice. Dolly, though, wasn’t born as a clone of her sibling, she was cloned from the DNA of a six-year-old sheep.

The team that made Dolly did so by taking a cell from the donor sheep, the one that Dolly would clone, and extracting the DNA from it. This DNA is a list of all the genes that make up the donor — a “blueprint” to make that exact sheep. They then put this DNA into an empty sheep’s egg cell and let it develop for some time in a test tube. Eventually, the young embryo was implanted into a surrogate mother — any female Sheep whose womb is used to let the clone develop and who eventually gives birth to the clone.

This newborn lamb, Dolly, was born as a copy of the donor sheep just as Clone would enter as a copy of it. Well, there is one major difference. Dolly is born as a newborn and it would take her six years to become a mirror image of the donor. By then, the donor would have grown older and the two would never have been exactly identical for this reason. This process of “reproductive cloning” cannot produce instantaneous clones. Despite this, it has been used since Dolly’s birth to copy cats, horses, deer, and other mammals but it has never been used to clone people.

Urza doesn’t seem bothered by any ethical complications with cloning humans, so let’s skip over those. Instead, we should tell him about the major technical obstacle to cloning people. Primates (monkeys, humans, Kird Ape, etc.) are much more difficult to clone because “emptying” a primate egg is likely to damage the cell’s ability to reproduce and, therefore, for the clone to be born. This is because the parts of the primate egg cell that dictate reproduction are too close to the DNA that needs to be removed. In most animals, these reproductive pieces are distant enough from the DNA that our process of emptying the cell doesn’t damage them. This means that we are not going to be able to clone people until this obstacle is overcome.

While we can clone many animals, cloning here on Earth is far less efficient than a Clone where Urza is from. This process isn’t as easy as it may sound and takes far more than the resources Urza uses for his cloning. The process was so inefficient at first that it took 277 cloned embryos to successfully make Dolly. But, this and the slow-play warning that you’d get while waiting for your cloned Old Man of the Sea to age are not the only differences between Earthly cloning and Magic cloning.

The last major difference here lies in the age-old discussion of Nature vs. Nurture. Cloning animals allows us to make Nature work our way, but Nurture still plays a role. While we wait for our cloned Old Man of the Sea to age, there is no way of knowing what’ll happen to him. He could fall in love and not want to jump on people or he could become so active that he doesn’t want to stay tapped. There is no way to know how the clone’s environment will affect it while it ages and, ultimately, our “clone” could end up much different than the original.

Ryan is a graveyard enthusiast with too many Muldrotha decks. He plays EDH, Modern, and Legacy but, more often than not, you'll find him stargazing and practicing astrophotography.