Something went wrong. Urza somehow found his way to a strange plane where things don't work the way he expects them to. He soon found out that this strange place is called Earth and he scoured the planet to learn about its mechanics. The mechanics here are much different than Urza has experienced in all of the planes that he has traveled before but he wants to understand them. Luckily for him, he found us and we are going to help him understand how things work here by hosting a science fair of sorts.

Welcome to the first edition of Urza's Science Fair. Luckily, we won't be presented with Urza's Science Fair Project, instead, we will be helping Urza understand how things work here on Earth. This series will be taking iconic Magic: the Gathering cards and interactions and explaining any real-life science analogs behind them. In this premiere, we will be looking at the iconic play: "Bolt the Bird."

The Science of Magic: Bolting a Bird

Urza tells us about a classic line of play where he comes from, targeting a Birds of Paradise with a Lightning Bolt. Apparently, this is a worthy trade, slowing down a player's mana acceleration at the cost of losing out on a couple of points of damage. I'm not too sure about what Urza means here, but it sounds like, in his world, he can somehow control a bolt of lightning and direct it at a small and defenseless bird. Well, how about we tell Urza about the way this works in our world?

First of all, lightning bolts (on our plane) are caused when there is a difference in electric charge between two regions. In other words, if a cloud builds up too much charge it will discharge lightning to another region to balance the charges of the cloud and its target. Typically, lightning is going towards the ground and it follows the path of least resistance to get there -- this is why it looks crooked and bent in the air, it is finding the parts of the air that are easiest to travel through. This bending and fraying of the Lightning Bolt is well depicted on the card's art, each "branch" of lightning is feeling out parts of the air to find the easiest path to its target. Since lightning is almost always trying to find its way to the ground, it wouldn't target a flying bird itself, but could a bird be part of this path of least resistance? 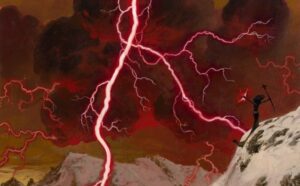 Well, birds are actually sensitive to a change in air pressure and they use this as a sign that they should get somewhere comfortable quickly. They know this pressure change often brings rainy weather and birds don't want to get stuck flying in the rain. This means they likely won't be caught in the thunderstorm anyways since they know that it's coming. Things don't always go as planned though, so what if they are stuck flying home in a thunderstorm? It makes sense that flying things can get inside the lightning bolt's path -- in fact, this happens with airplanes a lot. Luckily, we have designed airplanes so that you won't notice this from the inside, but birds don't have the luxury of human design.

Birds do have a lot of features that make them unlikely to be struck still. Unlike airplanes, birds are relatively small and not made of metal. We were all told not to put a metal fork in the toaster and this is because metal is conductive, in other words, it is an easy path for the heat from the toaster to take. Lightning works the same way, the metal airplane provides an easy path for the lightning while a bird's feathery body provides a much harder path for the lightning to travel, so the lightning would often opt to travel through the air next to the bird rather than through the bird itself.

All that being said, there are many accounts of birds being struck by lightning both in the air and on a tree (actually, even while swimming) but the chances are not very good for an Earth-bound Lightning Bolt to strike a Birds of Paradise. Ironically, it may be more likely in our world for Urza's own Weatherlight to get hit by a Lightning Bolt than one of these birds he is so fond of killing. Ryan is a graveyard enthusiast with too many Muldrotha decks. He plays EDH, Modern, and Legacy but, more often than not, you'll find him stargazing and practicing astrophotography.