Demonic Tutor is one of the most controversial cards in the history of Magic. Originally printed in Alpha, it was singled out along with Unholy Strength for depicting a pentagram. Both cards drew public criticism, and even the New York Times reported concerned parties felt it used “…language taken straight from Satan“ and was “…steeped in the signs and rites of 30 satanic cults….”

The moral panic worried Wizards of the Coast so much that, come Summer Magic in 1994, both were reprinted without a pentagram in sight. It wasn’t until 2011 that the demon’s forehead was returned to its former blasphemous glory. Fast-forward to 2021 and, while Unholy Strength has fallen into obscurity, Demonic Tutor remains as contentious as ever. 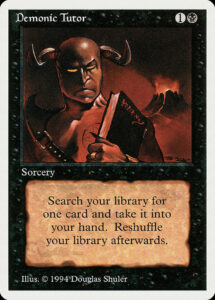 But it isn’t “Demonic” that has people up in arms these days. It’s “Tutor”.

Before we jump into my defense of tutors, I’d recommend reading Corbin Hosler’s original article that this piece is a response to.

What Constitutes A “Tutor”?

Typically, a tutor is something that searches your library for a specific card. The most powerful ones tend to have “Tutor” in their name, but the number of cards that let you search and shuffle extend well beyond that. Cultivate is a tutor. Rampant Growth is a tutor.  The downside of Path to Exile is essentially a tutor. I rarely hear anybody complain about these effects, which leads me to believe that the problem is not the practical mechanics of tutoring – more on that later – but the raw power of having what you need when you need it. The primary gripe I hear is that powerful tutors hurt the variance that Commander is known for.

Of course. Or at least they do in the traditional sense. Unconditional tutors, like Imperial Seal and Grim Tutor, effectively serve as a second copy of any card you’re running. A deck with tutors obviously has more reliable access to specific cards.

What I contend with is the idea that variation is what draws us all to Commander. Yes, a singleton format naturally has more variance than a traditional format with four copies per card, no denying it. But one of the defining features of Commander is that every deck has access to the same card every game. The command zone inherently reduces variance in a way that no other format can match (the Companion mechanic notwithstanding).

Both Limited and Canlander involve far more variation than Commander could ever hope to, but given that more players are drawn to Commander than either of those formats, I feel as though variance is not the universal desire that it’s sometimes made out to be. Consistency and reliability are woven into the very fabric of the format. We can’t forget that plenty of players love it for that.

Furthermore, less variance within the context of a deck doesn’t actually mean less variance in the context of the format at large. There are plenty of decks, from janky thematic brews to high-power combos, that simply don’t function without tutors. A format without tutors would kill countless decks. I’m not talking about cEDH here, I’m talking about fun, casual decks that happen to rely on cards that aren’t available from the command zone.

Let’s say you love the interaction between Koll, the Forgemaster and Skullclamp (I certainly do). Maybe Song of Creation is your absolute jam. Maybe you can’t get enough of Stuffy Doll and Boros Reckoner. If you want to see these cards and actually play with them, tutors are your friend. And that’s to say nothing of secret commanders. Without tutors, secret commanders would remain… well, secret. Expecting to naturally draw into one card in 100 will leave you unsatisfied, particularly in colors that have no reliable access to card advantage.

Corbin Hosler is one of many who loathes what some call the “loading screen” effect that tutors introduce. Anyone who played Standard while Khans of Tarkir was legal doesn’t need to be reminded that even simple tutors with narrow targets, like fetchlands, carry a time cost. I agree that this makes games longer, but I’m unconvinced that it’s an actual problem. Playing any physical card game is naturally clunkier and more cumbersome than it would be in a digital space. In my experience, these short waiting periods are when the table starts chatting and getting to know each other. But that’s not to say we can’t strive to speed things up for the players with ants in their pants.

If you’re one of many players, like myself, who enjoys tutors, or even if you’re just curious to try them, I’d recommend only playing them in decks that you’re intimately familiar with. I have no gripes with someone cracking their Evolving Wilds and pulling out a basic Plains. I don’t think anyone does. But what so many despise is the “window shopping” scenario, at its worst with unconditional tutors. Randomly browsing with a tutor just for the sake of it. Going right for that perfect silver bullet or the last piece of your combo? No problem. Going through each card one by one, dillying and dallying and delaying? Nobody has time for that. The polite thing to do is to know what you’re looking for when you start searching your deck.

One of the major appeals of Commander is how much it caters to the Timmys and Tammys among us. The players who want to run out big beaters or high-CMC flashy sorceries, cards that don’t have homes elsewhere in Magic. In short, the human equivalents of Colossal Dreadmaw. Appealing to these players is a big part of Commander’s success, and I hope that spirit is never lost. But they are just one of many player archetypes we see in Magic.

We all know that Spikes love tutors, but often lost in this discussion are the Jonnys and Jennys, they who love assembling complex Rube Goldberg machines, intricate ticking engines that require a specific combination of specific cards, combos that would never occur to most players. Players that are just chomping at the bit to “do the thing”. Their thing. The fact of the matter is that even in a long game with ample card draw, “the thing” is going to be near impossible to do if it requires three or more cards. Johnny/Jenny just needs those tutors. They’re crucial for making his deck run. They’re also crucial for having answers to problems when you need them.

It’s no surprise that format progenitor Sheldon Menery isn’t a fan of tutors. His preferred gameplay experience differs from my own, and if you’re interested in how, my Revising the Rules series covers it. Speaking with The Mind Sculptors, Sheldon says he’s “a big believer in making your brain do the work, not your cards, and tutoring lets your cards do the work.”

While I appreciate where Sheldon is coming from, it strikes me as a little backward. The cards you put in your deck are a direct result of your brain doing work. You picked those cards and you designed your deck. Those tutors make you use your brainpower to determine which card you need for any given situation.

Unfortunately, no amount of brainpower is going to let you remove that Hushwing Gryff in play. Notion Thief can’t be sent to the graveyard with the sheer power of your mind. Tutors allow genuine counterplay against cards that would otherwise be horribly oppressive. Playing only the cards that you naturally draw into seems a lot more like letting your cards do the work than carefully thinking about how you build your deck so that a tutor can represent an out to a problematic board state. But for the sake of argument, picture Commander without tutors.

Can You Imagine A World Without Tutors? 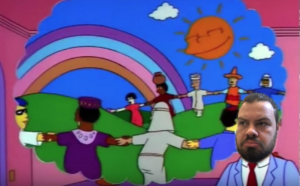 Commander without tutors would be a significantly less interesting and more narrow format. If you want to play with the cards you put in your deck with even a modicum of reliability, you need to see them in the first place. And without tutors, the best way to do that is card draw. That’s not to say that there’s anything wrong with card draw, but all of a sudden the colors that have reliable draw engines available in the command zone would become even more ubiquitous than they are already.

This would make white and red even worse than they historically have been. Secret commanders would disappear entirely. Johnnys and Jennys would rarely get to do their thing. Some of Magic’s most iconic cards would disappear from the only format other than Vintage that they’re legal in. Without being able to tutor, you’re entirely at the mercy of Lady Luck. That last point isn’t necessarily a bad thing, and I recognise that some players actively covet that experience, but there’s a simple solution for those players. Don’t play powerful tutors, and don’t play with players who use them.

Mr. Hosler outlines a scenario where a Lord Windgrace deck has a “virtual seven or eight Torment of Hailfires” in their deck thanks to tutors. I agree that this makes the deck much more threatening than it would be otherwise; what I disagree with is that the problem here is the tutors.

This is a failure of pre-game discussions. Nobody is denying that tutors are incredibly powerful. But I ask: why play against an opponent who relies on them if you, yourself, don’t? There’s a clear discrepancy in power levels at play here, and the easiest solution is to avoid that imbalance in the first place.

It isn’t tutors that make the format worse. It isn’t board wipes or excessive counterspells or stax pieces or fast mana, either. It’s running those sorts of cards in a pod that isn’t okay with it. If you’re the only player in your group that owns a Demonic Tutor, I’d encourage you not to play it. But the same goes for any powerful card.

If Not for Thee, At Least for Me

Commander is a format for everyone. It caters to the widest variety of playstyles and budgets in all of Magic. Tutors, love or loathe ‘em, are part of that and a huge part of Magic’s core mechanics. They may not be good for your playgroup, but they are good for the format.

Jake FitzSimons is a writer from Sydney and a certified Magic tragic. He’s a Johnny, a Vorthos, and a Spike, in roughly that order of importance. When he isn’t chewing his mates’ ears off about the latest deck he’s brewing, he can be found juggling, practicing piano, or doting on his cat.