Hey, I’m not that good at Wordle

The moderators at r/magictcg were contacted for comment and corroborated the claims made about their stances in this article.

To receive a permanent ban for using a single word on r/magictcg is quite a shock. I’ve been active there for a decade, and I can trace my first foray into MTG to a post in September of 2012 where I told everyone I was brand new to the game and tossing up between building a black or green deck. A small handful of kind players helped me. A week later I’d bought a Deck Builder’s Toolkit and a week after that I had the Jarad half of the Return to Ravnica Duel Deck. In the decade since, I’ve become an obsessive Magic fan and for the past year I’ve tried my hand at content creation with some small success. From little things, slightly bigger things grow.

Spoilers, deck techs, interesting videos, upcoming releases; in the absence of any official forum maintained by Wizards, r/magictcg is the nexus of the online Magic world. Like many Magic players, I rely on this subreddit for news and information. Like many content creators, I also rely on it for an audience. Or at least, I did. 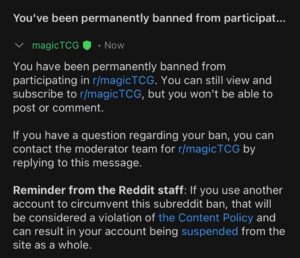 Years of engagement, thousands of words of meaningful interaction and discussion across hundreds of comments, a handful of posts I’m proud to say reached the front page, and one that reached number one, and it all counted for naught. My undoing was not a skeleton in the closet or a transgression against common decency. It wasn’t even a post. It was a comment. A comment that contained a five letter word that would take me at least five guesses to get right on Wordle.

I recognise access to r/magictcg is not a right, and having it taken away isn’t some great crime. I’m not advocating for less moderation. When I say unmoderated Magic spaces quickly become cesspits of homophobia, transphobia, racism, sexism, and general bigotry, you know the rotting excuse for a community I’m talking about. Don’t get me wrong, there are plenty of good reasons to be banned from the main sub.

But a poor reason for a ban is use of the P word. Not the one you need a bucket and a mop for, the one that rhymes with foxy. The one that a small portion of the playerbase is okay with, as long as it’s clearly stated and obvious to everyone involved what is happening. A playerbase I’d just written about.

I won’t say the word here, and you can see I didn’t say it on reddit either. I censored it. Not because I was trying to pull a fast one, but because I’d seen others do it, and assumed it was a tongue-in-cheek joke. There’s something funny about censoring a controversial but entirely G-rated word. It never occurred to me that it could be taken as a sneaky attempt to evade the bot brigade. I know of at least one moderator who regularly reads my work, so I assumed the comment would be seen either way – I didn’t think I had anything to hide.

In response to commentary that cEDH decklists tend to cost upwards of $18,000 USD, I explained that despite exorbitant prices, the majority of cEDH players are okay with a bit of printer paper. It seemed like relevant and innocuous information to share. Tournament settings notwithstanding, few competitive EDH fans expect you to own a piece of cardboard printed during Clinton’s first term.

That isn’t approval, it isn’t praise, it isn’t even a value judgement. It’s a simple statement of fact. Perhaps I could have been warmer or a little more neutral in my tone, but you tell me; was I wrong? Are most cEDH players not okay with that-which-shall-not-be-named? This past weekend saw Marchesa 2022 take place at Mox Boarding House, the largest cEDH tournament to date. They raised $20,350 USD for the National Domestic Violence Hotline. Were some amount of _______ allowed? You betcha. Did the list of approved cards include Timetwister and The Tabernacle at Pendrell Vale? Correct on both counts. I’d hoped to write about the incredible success and surprising results from Marchesa 2022 this week, but thank goodness I didn’t. I may have had to use… the word.

But back to my naughty comment. Part of putting content out into the aether is answering follow-up questions and interacting with anyone kind enough to read what I write. In this case, my effort to do so, a response others seemed to find helpful, was met with an immediate and permanent ban. I felt, and still feel, like I’ve been caught doing 62 in a 60 zone, and the cops haven’t just taken my licence, they’ve taken my car and crushed it into a cube.

You may wonder if I’ve secretly done something else. Something I’m not showing you, something horrible, the real reason I got banned. A reasonable suspicion, but there are no surprises here.

I don’t mean to whinge, and “cishet man banned from online space” isn’t the sort of thing you stop the presses for. But I can’t keep mum when I feel I haven’t been given a fair go. This back and forth continued following the same tone. I apologised, I pleaded, I grovelled, but was told my time was up and the ban was permanent.

I’m also not the first to encounter this bizarrely heavy-handed reaction. A month ago, the preeminently talented Ben Schnuck, now known for his incredible Shades Not Included Secret Lair, was unable to post his own announcement, courtesy of the fact he was banned from r/magictcg. Why? Guess.

The man’s work was stunning enough that Wizards of the Coast saw fit to hire him, to pay him actual factual money and join the ranks of artists lucky enough to illustrate Magic cards. But having posted his own P cards a year prior, he wasn’t good enough for r/magictcg. And these days, you don’t even need to share a [REDACTED] to get banned. Just mentioning them is enough.

I spoke with Ben, and he told me he was deeply disappointed in the subreddit’s response to his work, their response to my work, and the good faith engagement from everyone even tangentially related to [N/A]. He said he felt that it stifled the incredible work that [CENSORED] artists are doing for Magic, and that closing the discussion on them entirely was analogous to closing the conversation on what Magic could be.

A quick reminder, if it’s not a sanctioned tournament, Wizards of the Coast does not care if you use cards that aren’t entirely real. This is something they have repeated publicly, and here is the key takeaway: “Wizards of the Coast has no desire to police playtest cards made for personal, non-commercial use, even if that usage takes place in a store.“ Even if they did, would we collectively treat such cards as so taboo that their very mention was tantamount to blasphemy? Or could we just acknowledge that, like them or loathe them, they exist.

r/magictcg is holding its users to a standard not even WotC themselves care to maintain. This would not be such a problem, were it not for the fact r/magictcg is the only game in town. For small time creators, it can feel like the only avenue to a wider audience, particularly with written content.

The mod team claims the presence of the forbidden word is an “existential threat to the subreddit”, and even a “potentially ruinous threat to the individual mods who don’t want to get sued by WotC”. They tell me that WotC has gone after forum operators before, like they did RancoredElf who was sued for leaking cards in 2006, or more recently with the crypto bros who thought minting Magic cards on the blockchain was a good idea. They tell me that my actions force them to take the same risk. I’ll need someone else to explain to me how dropping the P bomb could be compared to leaking Magic cards or trying to steal IP for a financial scam, because I’m not seeing the connection right now.

In fact, dabbling in the Big P looks like it can go one of two ways. You can either act in bad faith and blatantly go against WotC’s wishes, or you can post content that falls under their existing fan content policy. One will get you sued, the other will get you a job. I did neither. I don’t flatter myself and think what I can bring to r/magictcg is on par with Ben’s work, but it’s frustrating to realise that someone contributing to the wider world of Magic, someone fool enough to try making a meagre living through content, someone reasonable, with every intention of good behaviour, can have the rug ripped out from under them so unceremoniously.

It’s a shame that the community leaders of the largest repository of Magic information on the internet can be so stubborn, so unwilling to compromise, so terrified of a single word it must be met with hurried hush. I struggle to see how the current policy is doing anyone any favors, but these unexplained mysteries are common in online spaces maintained by unelected, unofficial, and incredibly unreasonable moderators. I don’t want less moderation, I want better moderation. I want to feel like the online hotbed of all things Magic is being run justly. I don’t. Judging by the number of people who’ve reached out to me since hearing of this ban, I’m not alone either.

It’s not lost on me that by writing this, I burn any bridge I could still cross with the subreddit, but I’ve already spent six days appealing my case to no avail. All I see now is the distance between my side of the river and theirs. So it goes.

I’m not here for a debate about whether the existence of these cards is a good thing or a bad thing. I have my own stance, and I’m as interested in convincing you of it as I am in you convincing me: not even remotely. That’s not what this is about. I can think of many words that should get you banned from a subreddit. Plenty that should get you banned from reddit altogether.

Proxy isn’t one of them.

Jake FitzSimons is a writer from Sydney and a Magic fiend. He's either the johnniest spike or the spikiest johnny, nobody is sure which. When he isn’t brewing or playing cEDH, he can be found writing, playing piano, and doting on his little cat.