I've just returned from vacation and I'm still feeling the Christmas spirit flowing through me like a gooey, mint-flavored sap.

Obviously, I want to share the good tidings by building a Christmas-themed EDH deck. Unfortunately, the lore surrounding Jolly Old Saint Nick is a bit in flux. It's hard to nail down a select group of characters to base this deck around. Should we go with the Religious Depiction, or the American Suburban Version, or the Coca-Cola rendition? Nah, those are probably too controversial. Luckily for me, Christmas movies exist and usually have pretty well-defined holiday lore.

There are just so many good Christmas movies to choose from. Klaus, The Grinch, Elf. Which one to choose?

I've been informed that this is mandatory. Okay. Well, here we go.

Who-oh-who shall our commander be? More importantly, how do we win? This one might be a little tough. How does Santa "win"?

GIFTS! We need to give our opponents lots of GIFTS! Say what you will about Tim Allen's Santa, he gets the job done. He delivers gifts so well that everyone forgave his murder. That's impressive. We need a commander that gives our opponent lots of things... I've got it!

What can we give our opponents that seems like a good gift? Life? Creatures? Cards? Wait! I've got it. Why not everything!? 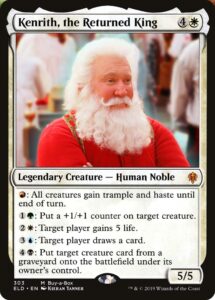 Kenrith, the Returned King is the perfect commander for this deck.

Our main win condition is to have all of our opponents draw their entire deck since that feels like the act of gift-giving. To accomplish this we'll need some combo pieces to generate infinite mana. I'd also be a fool to not run snow cards as a sort of sub-theme. Let me be clear: this is not a good deck. This is a silly deck that costs a pretty penny.

If somehow this is your first time playing EDH and you really want this to be your deck, I'd advise you to peruse the rest of this site for much better deckbuilding guides (after finishing this article, of course).

If that warning hasn't doused the fire in your heart that is wanting to play the "The Santa Clause"-themed EDH deck, then may I recommend writing down all of the cards you want, mailing them to the north pole, then waiting for the 25th of December when Tim Allen will climb into your house and leave them scattered around your living room. You've been warned.

Now, onto the deck.

Did you know Tim Allen went to jail? In real life. America's Sweetheart, Tim Allen. That's your little fun fact for the day.

Where would Santa be without his helpers? Tim Allen's Santa needs a lot of help. Seriously, watch the movies (yes, this is a threat). It's kind of a shocker that he gets anything done. It's like they ripped him right off the set of Home Improvement and told him to put on the red suit.

Alright, in no particular order, here is the colorful cast of characters from The Santa Clause represented by Magic: the Gathering cards. I never thought I'd get to say that. I never even wanted to. 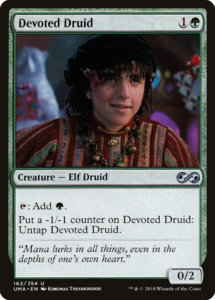 Santa needs his elves, and here we have the help of Bernard the elf. Everybody knows and loves Bernard the elf. For the uninitiated of you, Bernard is the head elf at the north pole. He works tirelessly to make sure Christmas happens. I thought I had it rough. He's truly one devoted elf. Get it? That's a pun. I've chosen Devoted Druid to represent Bernard. He's too hard of a worker, and he's constantly putting himself in harm's way to get presents to all the good kids out there. He works so hard in fact that he quit sometime before the third movie. Oddly enough he is still employed at Santa's Workshop in the novelization of The Santa Clause 3: The Escape Clause. Wait? Why do they have novelizations of The Santa Clause? Why? For whom?

Anyway, I think this card fits his character nicely. After all, we're trying to generate infinite mana with this deck, and Devoted Druid combos seamlessly with our next sleepy little helper. 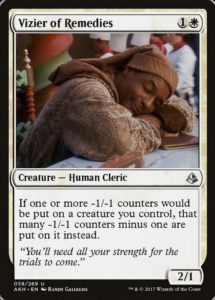 I'll be honest, the only reason I made Vizier of Remedies into Sandman is that I needed it in the deck and I think he's kinda cute. The suppression of -1/-1 counters kind of feels like a sleep spell too. I know how I get after staying up past my bedtime. 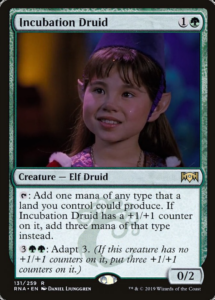 Judy the elf is... in the movie. That's about all I know. I think she was a robot? Is that right? That can't be right. She showed up on the cast list when I googled "Characters from The Santa Clause". Sue me. She has some information for Santa or something. Thus the Incubation Druid. If you don't like it, you can swap her out for the other one-dimensional elf. I think his name was Curtis. Again, Incubation druid is in here for those infinite mana combos with cards like:

Of course, you'll need land that produces blue mana to get this combo rolling. 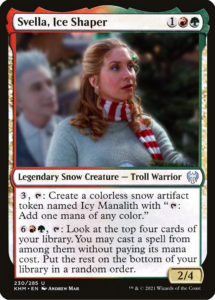 Santa's loving wife, Mrs. Claus. She really takes charge of the north pole when she gets there. Okay, that's a lie. She doesn't really do anything. I'm beginning to think these movies were purely Tim Allen star vehicles. I do remember her talking about Christmas ornaments though. Svella, Ice Shaper decorates with little baubles. It works perfectly. I wanted more snow representation in the deck. You can't have Santa without snow. Unless OPEC has anything to say about it. Besides, the more mana the merrier. 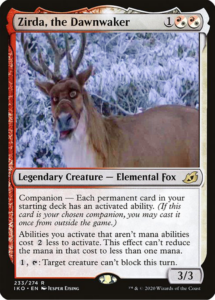 Comet, the farting reindeer... Hold on, I need to take a quick break after typing that. 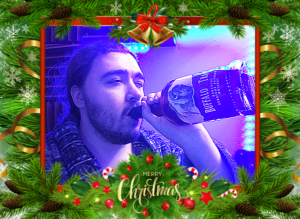 Alright. I'm back.  Comet is Zirda, the Dawnwaker because it's a Kenrith deck and they just work well together. Comet also helps convince Tim Allen to be Santa by eating a pile of candy and then farting a bunch. I wish I was joking. That's my explanation. Moving on. 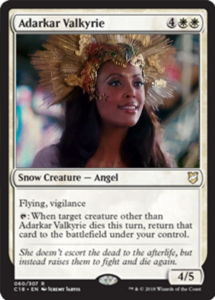 Just when I thought I couldn't do it anymore, Aisha Tyler came to my rescue. She's my angel, and coincidentally she's Adarkar Valkyrie in this deck. Mother Nature could be so many cards, but in this deck, I couldn't think of a better fit. She's a snow creature that creates a few cool infinite mana combos with cards such as: 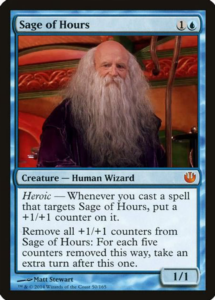 Sage of Hours is an option in the deck because Father Time is a character in this brilliant franchise. If you need some time to assemble the true combo, but you have infinite green mana, you can stack infinite +1/+1 counters on Sage of Hours using Kenrith, the Returned King's green activated ability, and then take as many extra turns as needed. Your friends will love it.

Who else? I suppose Jorn, God of Winter could be Jack Frost. The Easter Bunny could be Kwain, Itinerant Meddler. That Easter Bunny is genuinely terrifying. I can't in good conscience show you that. 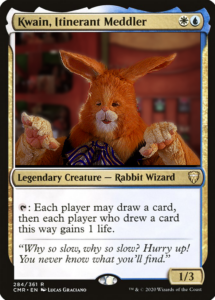 Jeeze. This film franchise has turned me into a real Scrooge. All I wanted was to enjoy Christmas with my favorite card game. Is there anything that can return that childish sense of whimsy to my soul?

Actually, now that I think about it... 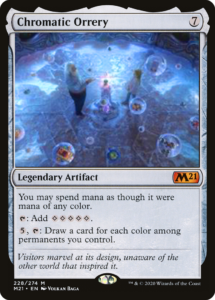 This is my favorite infinite mana combo in the deck, and it screams Christmas. All you need is one Chromatic Orrery (represented here by the best idea in this entire franchise, the Hall of Snowglobes), one self-untapping enchantment, such as Freed from the Real, and a very Christmas-friendly creature by the name of:

Simply turn Chromatic Orrery into a creature using Toymaker, enchant it with Freed from the Real/Gauntlets of Light/Pemmin's Aura, and HO-HO-HO, you have infinite mana of any color. Isn't that the true meaning of Christmas? Getting lots of things? I mean, GIVING lots of things. Activate Kenrith's draw ability targeting your opponents and win! Merry Christmas!

I've made it. This is the end of the article. I'd like to thank you all for bearing with me. These movies are a fever-dream, and if any of your nasty nostalgia synapses are telling you to watch these movies, suppress those urges. Do anything else. The human race has suffered enough.

I hope you all enjoy this holiday season with your friends and/or family. Happy Holidays and Happy New Year!

This has been Clams with the Commander's Herald, and I bid thee farewell. His real name is Taylor, but everyone knows him as Clams. No one knows for sure why. Maybe you will if you ask him nicely. He's a video producer by trade. Making commercials and web content for a constant slue of clients. When he's done with that song and dance, he sidles over to his computer to continue making videos for himself and his friends. He just can't stop. It's unhealthy. If he ever does get around to taking a break you can usually find him at the bar playing a game of EDH with his buddies. He's 5'10, born in NYC, a Capricorn, and he loves to laugh. If he sounds like your type, maybe give him a follow! "The Greatest Show in the Galaxy" over on youtube.