Image from The Nightmare Before Christmas © Disney

Welcome back to Alter of the Brewed, where we brew the most thematic Commander decks that have ever been sleeved. It's spooky month, which means we're taking a trip to Halloween Town with our friends from New Capenna, The Beamtown Bullies.

As with each of our decks, first we'll settle on our priorities in our deckbuilding. How do we make a deck that has all the recognizable spooky charm of The Nightmare Before Christmas, but that still plays to the strengths of our commander and creates an overall game experience that is fun? Let's take a look at The Beamtown Bullies: 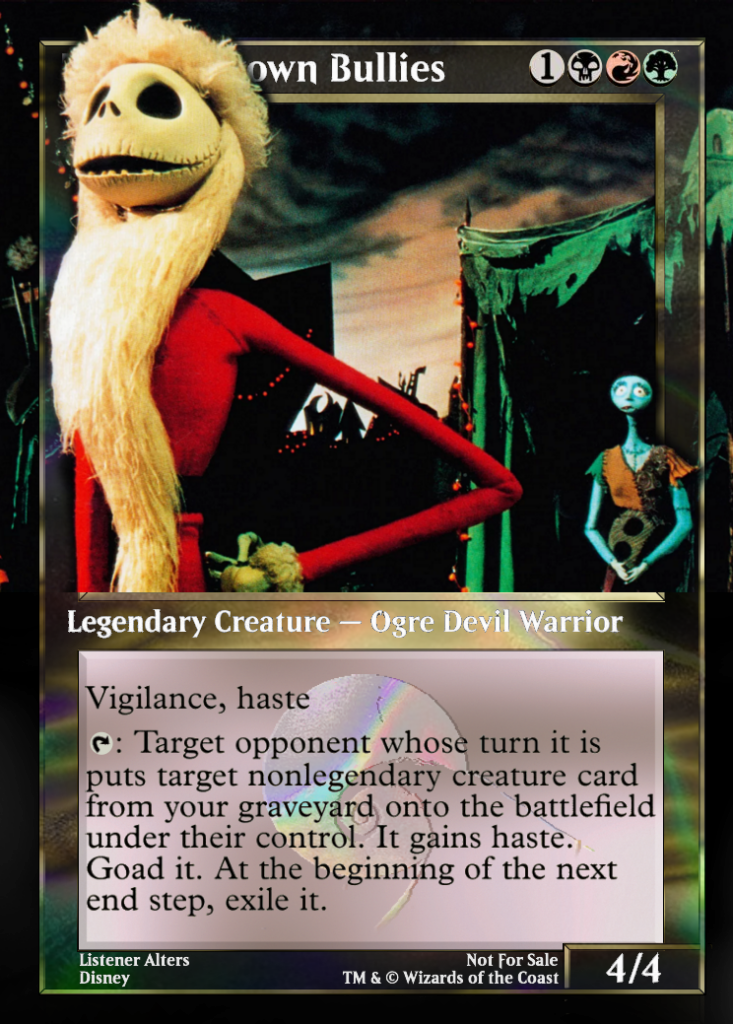 The entire premise of The Nightmare Before Christmas is that Jack, the Pumpkin King, becomes enthralled with the idea of the gift-giving holiday of Christmas, but when he takes the reins of Santa's sleigh, himself, the gifts he doles out are a bit... disturbing. What better fit for handing out frighteningly terrible presents is there than The Beamtown Bullies? Plus, I can't help but find satisfaction in black, red, and green as twisted Christmas colors. That means that unlike other weeks, we don't actually have to consolidate many competing priorities when building this deck. The Beamtown Bullies do exactly what Jack Skellington did: bring back horrifying gifts from the grave.

One final note: it's easy to hand out terrible gifts that completely lock out players from the game, whether it kills one player immediately, like Leveler, or just prevents them from playing much Magic, like Sire of Insanity. For this article series, we'll tend to avoid particularly salt-inducing includes because our goal is to create thematic decks as our top priority, and playing a deck with theme as the primary goal will set your opponents up to expect a particular kind of game. Sitting down and telling the table, "This is my Nightmare Before Christmas deck!" and then blowing someone out with a Leveler on turn 3 is very likely to conflict with expectations.

First, we'll start with our most thematic card inclusions. Here are some my picks for 1-for-1 analogies that synergize with our deck's strategy. There are more choices a keen eye might catch in the final decklist, but sound off with your thoughts in the comments below!

Now that we have a respectable amount of theme in place, we'll still need to determine our actual gameplay strategy.

First, we want as many ways to dump cards into our graveyard as possible. With The Beamtown Bullies on board, every card milled is not unlike a card drawn, since we'll want as many reanimation options as possible for whatever scenario might present itself. Looting, milling, wheeling, we want it all.

Next, we hand out creepy creatures for our opponents to get in at each other for big damage or to generate an effect that we need for the turn. Note that for this section of cards, this is a great place to make changes to the decklist to fit your local meta.

Finally, if we want to add in some tricks with our treats, we may want to get a little clever and find ways to kill our own reanimated creatures so we can reuse them, or send in creatures that are likely to kill themselves, rather than have them get exiled at the end of the turn with The Beamtown Bullies' effect.

Finally, we add in some ramp (mana dorks work great with our subtheme), removal (my list is low in this category, so tune this to your meta), and some ways to do some reanimation for yourself, and here's how my The Nightmare Before Christmas list has shaped up: Residents of Halloween Town, have I done you justice? Is this list sufficiently spooky? Let me hear it in the comments, and don't forget to check out all of these Alter of the Brewed decklists over on my Moxfield page. Until next time, Happy Halloween!