Wizards of the Coast revealed on Thursday the Secret Lair February Superdrop, a massive collection of reprints and unique cards spread over eight individual "drops" that feature a number of artists tackling Kamigawa-adjacent themes. The Superdrop will be "print on demand" and is available now.

Headlining the collection is the first-ever collaboration between Wizards and Capcom, with the Secret Lair x Street Fighter product. The collection features eight mechanically-unique legendary creatures that depict classic Street Fighter characters, and may or may not also come with a special tie-in announcement from Capcom. Wizards has announced that while these eight cards will be brand-new in terms of both art and text, functional reprints that depict characters more at-home in the Magic Multiverse will be available in a future release, indicating that lessons have indeed been learned from a particular zombie-related Secret Lair from the past (more on that later). Similarly, the cards currently available only in the recent Secret Lair x Stranger Things drop will see functional reprints in New Capenna. 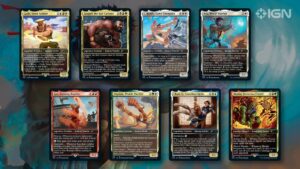 In Secret Lair x Street Fighter, we're getting everyone's favorite classic Street Fighter characters, and also Ken. While there's a noticable lack of a certain military-capped boss of Shadaloo, Secret Lairs are known for tossing in "hidden" cards. So who knows? Maybe it'll be M. Bison, maybe it'll be Rufus — we'll have to wait and see. It's also worth noting that if you're a fan of the art on these cards, this might be the only way to get your hands on it. At least, the artists themselves won't be selling prints, original artworks or artist proofs, and the art itself was created digitally. 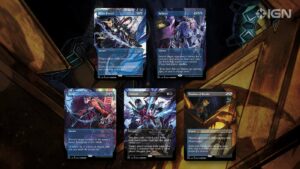 For fans of Kamigawa: Neon Dynasty's, and by extension, Magic's newest planeswalker, Kaito Shizuki. This particular drop features Kaito ninja-ing about on five reprints, most of which appear in a number of blue-black decks that don't frequently make friends — Brain Freeze, Bribery, Snap, Unmask and Shadow of Doubt.

Kamigawa: The Manga: The Cards 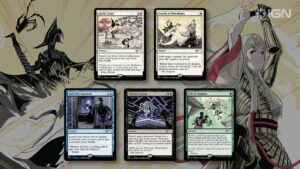 Using art from the Kamigawa: Neon Dynasty manga created by artist Riyou Kamei, Kamigawa: The Manga: The Cards brings us new versions of Idyllic Tutor, Swords to Plowshares, Solve the Equation, Praetor's Grasp and Veil of Summer. Fun fact: this version of Swords to Plowshares is the tenth unique art for the card, and third version just from a Secret Lair. 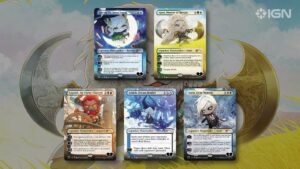 In a way, we've come full-circle with this particular stylizing of planeswalkers. For those that aren't into the chibi style, this drop is likely easily ignored, much like many Secret Lairs that might not speak to you. But if you're into it, you're likely really into it. And that's sort of the point of Secret Lairs, right?

For this one, we get chibi versions of Tamiyo, the Moon Sage, Ajani, Mentor of Heroes, Angrath, the Flame-Chained, Ashiok, Dream Render and Sorin, Grim Nemesis.

Pictures of the Floating World 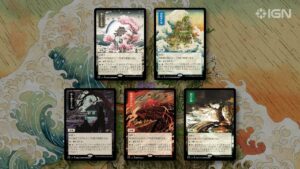 Remember the "hideaway" lands? Cube staples that also occasionally pop up in Commander lists — especially lists that like casting things from exile for free, like, say, Prosper? Well, if you wanted Kamigawa-themed "hideaway" lands created by a quintet of Japanese artists, you're in luck. Shelldock Isle transports itself from Lorwyn and gets the Kamigawa treatment along with its friends Howltooth Hollow, Spinerock Knoll, Windbrisk Heights and Mosswort Bridge. 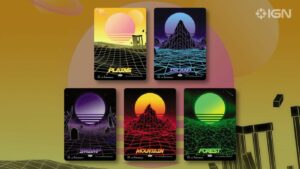 One each of the basic lands gets a synthwave treatment, courtesy of Ben Schnuck. Schnuck is a well-known maker of Magic fan art, alters and proxies, and thanks to this drop, he's able to put "official Magic: The Gathering artist" on his resume. Seeing Wizards embrace the rapidly-expanding Magic fan-creation community is a good sign, and here's to hoping it continues. 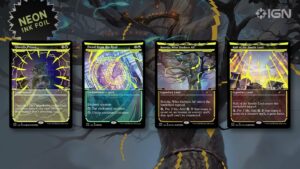 This "drop" includes four reprints that along with a decidedly Kamigawa-ian aesthetic will feature "neon ink" foiling. Those out there who aren't fans of foil effects that make the cards themselves a little more "tactile" might be leery about the new treatments featured here, but until players get their hands on them in person, there's no way to be sure. This time around, we're seeing reprints of four cards from the original Kamigawa block, namely Ghostly Prison, Freed from the Real, Boseiju, Who Shelters All and Hall of the Bandit Lord. 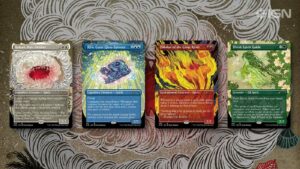 In a similar vein of previous Secret Lair releases that featured a singular artist, we'll also be receiving four cards depicting the work of Japanese artist and illustrator Yuko Shimizu. In the world of illustration, Shimizu is a well-known name, and in 2018 she earned herself the Hamilton King Award, one of the most prestigious awards in illustration — not to mention that fans of DC comics might recognize her name as well. The last Secret Lair drop features her take on Hokori, Dust Drinker, Kira, Great Glass-Spinner, Eidolon of the Great Revel and Elvish Spirit Guide.

What is a Secret Lair Anyway?

The first Secret Lair was released in December of 2019 and represented a significant shift in product availability for players of Magic: the Gathering. For the first time ever, Wizards of the Coast was selling individual cards directly to players, and while reaction is — and continues to be — mixed, there's no denying their success.

In fact, the team behind the Secret Lairs was awarded with a unique card of their own: 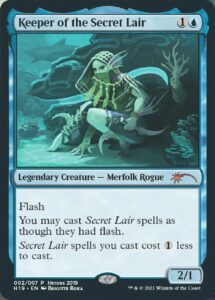 Each Secret Lair is available for purchase for a limited time, after which they're gone. They're listed either as individual "drops" containing upwards of a half-dozen cards centered around a theme, or a "superdrop" that bundles a number of similarly-timed drops together for convenience and/or impulse control issues. At first, Secret Lairs only contained reprints of traditional cards with new art or stylistic treatments. The Walking Dead release, which dropped in October of 2020, was widely panned by players for introducing mechanically-unique cards only available through a Secret Lair purchase. It's also one of the top-selling Secret Lairs so far.

Since then, Wizards representatives have stated that while they plan to continue including mechanically-unique cards in future Secret Lairs, much like this month's Street Fighter announcement as well as future drops that'll feature crossovers with Fortnite, Warhammer 40,000 and Lord of the Rings, mechanically-equivalent cards will appear in subsequent "traditional" releases or on "The List," found in Set Boosters. It's worth noting that these "mechanically-equivalent cards" will appear on "The List" more frequently than other cards, and can also be reprinted in other products, namely products focused on Commander.