Welcome back to Sphinx’s Tutelage, your source for needed knowledge about confounding commanders. After our last deep dive into Orvar, let’s take a look at something a bit more simple, and what could be more simple than nothing? Well...

As exciting as wild new theories are, Ruxa knows they're worthless without a deep understanding of the basics. He teaches students of all levels, and even his most experienced pupils benefit massively from a much deeper understanding of the building blocks of the world.
– The Legends of Strixhaven

Building a deck around this unusual ursine will require some planning and patience. His suite of abilities are certainly unique enough to warrant a look, so let’s dive a little deeper into the vicissitudes of this vanilla vanguard and explore how to be one with nothing.

What does “No Abilities” mean?

All of Ruxa’s abilities deal with creatures with no abilities, so let’s dig in to what exactly “no abilities” means in Magic. It has a few definitions in the game, but the one we care about is as follows:

113.1a An ability can be a characteristic an object has that lets it affect the game. An object’s abilities are defined by its rules text or by the effect that created it. Abilities can also be granted to objects by rules or effects. (Effects that grant abilities usually use the words “has,” “have,” “gains,” or “gain.”) Abilities generate effects.

Ok, so abilities start with what’s in the text box (on non-token creatures at least), so let’s look at the rules for the text box:

207.1. The text box is printed on the lower half of the card. It usually contains rules text defining the card’s abilities.

207.2. The text box may also contain italicized text that has no game function.

So, what all of this means is that any text in the text box that’s not italicized/flavor text is an ability and so is anything a token is created having beyond other characteristics. This makes it obvious that something like Bear Cub will benefit from Ruxa while Questing Beast won’t, but it may be less obvious to some that Icehide Golem will benefit while Tarmogoyf won’t.

TL;DR: Ruxa’s favorite flavor is vanilla and he won’t accept anything else.

What Doesn’t Work with Ruxa

So now we’ve sorted out which cards Ruxa can enhance based on what’s printed on them, but now we get into the stickier area of effects that grant abilities to your creatures. Any effect that says one of your creatures “gain” or “have” an ability will no longer make them vanilla and thus take them out of Ruxa’s good graces. This means that something as innocuous as Cryptolith Rite or Archetype of Endurance will nullify your whole strategy.

Be careful when using older cards that look like they change the rules as some of them might have had their Oracle text updated to actually grant an ability that has been keyworded. For example, the Mercadian Masques printing of Spidersilk Armor says “Creatures you control get +0/+1 and may block as though they have flying.” This looks Ruxa-compatible, but the current Oracle text (and the most recent printing) lets you down by actually saying “Creatures you control get +0/+1 and have reach.” 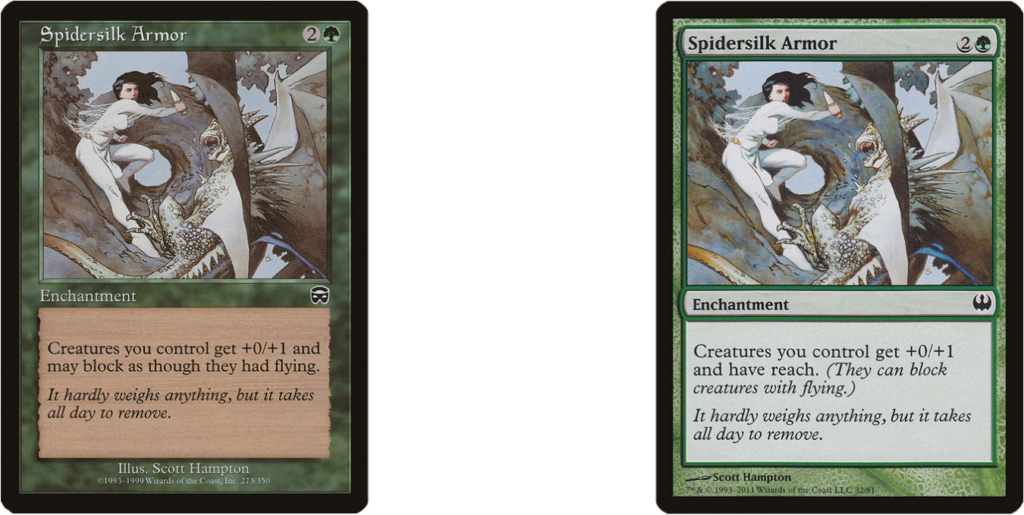 Finally, I’d like to point out another pair of cards that look safe to play with Ruxa but are actually insidious traps, Dryad Arbor and Ashaya, Soul of the Wild:

Right now you might be scratching your head in confusion, wondering what’s wrong with these cards for Ruxa. The answer to that question lies just under the soil of the creature’s forest-y status. Having a basic land type such as forest grants an inherent mana ability, as spelled out here:

305.6. The basic land types are Plains, Island, Swamp, Mountain, and Forest. If an object uses the words “basic land type,” it’s referring to one of these subtypes. An object with the land card type and a basic land type has the intrinsic ability “{T}: Add [mana symbol],” even if the text box doesn’t actually contain that text or the object has no text box. For Plains, [mana symbol] is {W}; for Islands, {U}; for Swamps, {B}; for Mountains, {R}; and for Forests, {G}.

This means that all your creatures that are now forests are each saddled with a hidden “{T}: Add {G}.” ability, and having an ability means that Ruxa won’t help these creatures out anymore.

What Does Work with Ruxa

As mentioned above, cards that set rules for your creatures are A-OK, as are cards that just pump their power and toughness, such as Ruxa’s own abilities. Some more cards of this type that I would recommend for a Ruxa deck would be Champion of Lambholt, Dolmen Gate, and Bower Passage.

Does the idea of a Ruxa deck packed only with vanilla creatures, saproling tokens, and a few enablers make you a bit bored? Well, you have a few more exciting options available beyond those things. Did you know that face-down creatures have no abilities?

Abilities are characteristics, and so being face-down overrides all abilities on the front face of the card. This means you can play fun morph creatures like Den Protector, Broodhatch Nantuko, and Nantuko Vigilante in your Ruxa deck. (They won’t benefit from Ruxa once they’re face up, of course.)

There’s also a trio of adventure cards from Throne of Eldraine that can benefit from Ruxa’s abilities. What? How? Well, the adventure portion of a card isn’t considered to exist if it’s on the battlefield, you just get the creature half.

715.4. In every zone except the stack, and while on the stack not as an Adventure, an adventurer card has only its normal characteristics.

This means that Tuinvale Treefolk, Curious Pair, and Garenbrig Carver are all fair game for Ruxa. Neat!

Scraping the Bottom of the Bear-rel

Thank you for bearing with me in this week’s article. Ruxa may not be the most thrilling commander out there, but even vanilla creatures need love and so it’s nice to see them finally get a commander that will do them some justice and not leave them to the grizzly fate of sitting in a bulk box somewhere. If my words swayed you, then perhaps you’ll consider joining Ruxa next semester on his trip to study the famed Muraganda Petroglyphs.

Let me know what you thought of this article in the comment section below or on twitter @JqlGirl and get in touch if you have any questions or any ideas for future columns. Now the time has come for me to ursine off and go hibernate for a while. Join me again in two weeks for the next installment of Sphinx’s Tutelage!