Are you feeling smothered by collection agencies, credit card debt, or that robber that broke into your apartment? Perhaps you've been injured on the job, or found yourself with a structured settlement despite needing cash now. Have you discovered that your house wasn't built up to code and is, in fact, insulated with mesothelioma? It's more common than you might think, but don't worry; we here at the In Laws are here to help.

No matter what court you're playing in, our team of legal professionals will work with you to get the results we want. Committed a crime? From traffic tickets to terrorism, you'll find your perfect partner guaranteed to get you off. Worried about a civil case? No such thing! The best part is we don't win unless we get paid. Nobody wants to, but eventually we all have spend some time with the In Laws. Why not make money doing it?

I'm Michael Celani, Esq., though you can refer to me by my sue-donym, Pasquali Fontina. I prefer boxers to briefs, but that doesn't change what I'm allowed to file to the 7th Circuit Court of Appeals. 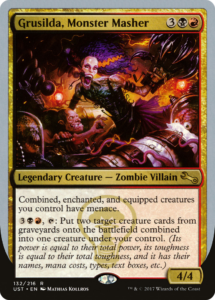 You're here because you want to play a Grusilda, Monster Masher deck, and you're worried about breaking the law. As a professional, I'm obligated to tell you that Grusilda is not a legal card in Commander. Of course, you wouldn't visit a lawyer if you wanted to do something above-board. Let's talk about how to get away with it!

I've had many clients over the years. Some of them have done truly terrible things, like run Urza, Lord High Artificer or violate the Magna Carta. There are times I've wanted to just tell the judge that they were guilty, but I've learned to check my attorney-client privilege. I realized that it could've been me in their shoes had I not had rich parents to pay my way through law school. Once my morals were safely squared away, I got to work doing the one thing lawyers do best: throwing all the evidence in the trash.

, Grusilda returns two creatures from the graveyard combined into one. That new permanent has the names, type lines, and text boxes of the two creatures, making them terrifying abominations. Of course, to start this confusing process, we need to get creatures in the graveyard first.

Grusilda decks aren't particularly complex, so let's just dive right into the meat of it. What sort of crazy combos does GamesfreakSA put in his Grusilda deck? Sure, everyone likes combining Pack Rat with Massacre Wurm. But you want to get away with playing a Grusilda deck, and doing terrifying things like winning the game all but guarantees your opponents will just Rule 0 away your Rule 0 commander. Consider instead:

An often overlooked piece of fine print is that the power and toughness of Grusilda's combined creature is equal to the sum of its parts. Summon Ball Lightning or Lightning Skelemental early in the game to commit an intentional tort, only to use its haste and power level later when you combine it with a smaller creature. Maybe you've discarded an Artisan of Kozilek or Pathrazer of Ulamog and are salivating at that double-digit power total. What can we mash it up with?

You know, my actual, real-life father is a lawyer.

I wonder if he'd approve of this article.