Aboshan, Cephalid Emperor is a wonderful idiot and surprisingly formidable control engine if you want to stop your opponents from playing Magic after asking them to play Magic with you.

Normally I don't care about Magic lore since the rare time they stumble across compelling storytelling, they do something dumb like changing formats into terrible books, setting up crappy TV show "oooh this guy's not really dead just wait for the sequel!" plot lines, or casually erasing LGBT characters. Here's the four pieces of non-Cephalid Magic story that I really enjoy if you're interested.

That being said, Aboshan's lore is really funny to me for some reason. I think just because he's a huge idiot who kills everyone with his incompetence.  They're Michael Scott if he was a slightly more racist tentacle Jace.

Cephalids are obscure tentacle people from Dominaria, and Aboshan was their ruler because his daddy was rich. The main man himself made a deal with this shady merfolk named Laquatus and married a genius noble-Cephalid named Llawan to solidify his rule of the Mer. You know, standard political maneuvering.

Then he went nuts and started exiling people left and right like an Isochron Scepter with a path on it. He was paranoid of everyone and thought they were scheming against him, so he banished a ton of people for no reason which in turn caused people to start scheming against him! He also exiled his wife who was not only royalty and super important as a political ally, but was also a crazy tactical genius.

Then he put Ambassador Laquatus and best friend forever, in charge of rooting out traitors in the kingdom. Laquatus was sort part of the Cabal and never really wore the friendship ring Aboshan made for him, so the guy just ran around executing anyone he didn't like with no oversight. For extra vorthos points, on EDHRec Laquatus is just ahead of Aboshan in mono-blue decks. 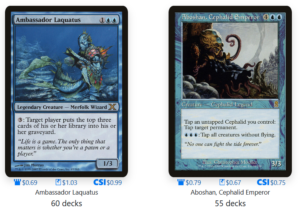 This was going on at the same time everyone and their grandmother in Dominara were going nuts over the Mirari, which was the One Ring if it just turned people into crazy idiots. Aboshan sort of personifies this whole Crazy-Idiot saga perfectly, which is so cuteeeee awww I just wanna squeeze his tiny lil' Caligula cheeks.

Eventually Aboshan went on land to check out the Mirari on his own. He, being the ~2 wisdom D&D character he was, thought that it could save his empire. Naturally he decided to pour all of the blue mana into it to flood half of the continent which killed him and just soooo many random land dwellers.

So ends the tragic tale of Aboshan, the brain dead squidward who killed thousands of people and never did anything right. On the bright side, his side piece Llawan used her absurd intelligence to out maneuver Laquatus through espionage and social engineering in a saga way more interesting than that one idiot's. Then she got a bunch of scientists together to work on the Riptide Project whiiiiich rebirthed a ton of Slivers that went crazy and murdered everyone.

So yeah, Cephalids are weird brain squids that are really good at accidentally killing everything. Let's do that in EDH.

I have built, torn apart, and rebuilt my Aboshan deck a dozen times or so over the years. I've found the most consistent build to be standard mono-blue control, but the far and away most fun one is Cephalid/Eldrazi Tentacle Tribal, so let's try that!

Willbreaker is Aboshan's real best friend. The obvious benefit is that you can steal a creature once per Cephalid, but what if you made all of the stolen creatures cephalids too? Hello Arcane Adaptation, let's grab some fothermuckers. Now after targeting a dude to tap and gaining control of them, you can tap that dude to instantly tap another dude before Aboshan's original tap dude ability resolves at the bottom of the stack and acquire every untapped creature on the board. Alternatively, just kill everything with Dismiss into Dream by turning your Cephalids into Edicts.

One neat trick with Aboshan is that he doesn't just let your Cephalids tap down creatures, but any kind of permanents. The obvious perk is shutting down a Nykthos, Shrine to Nyx or Cabal Coffers, but another nice trick is running Blinkmoth Urn and tapping it down at the end of your turn to make the benefit one sided. Similarly, tap Winter Orb at the end of your opponent's turn so only you get mana and nobody will ever love you. Or if you really feel like it, tap down some Planeswalkers just to send a message.

Floodgate is a pet card that I jam in every mono-blue deck I run. To be fair, the only mono-blue deck I play is Aboshan, but still what a sick card. Who needs Propaganda when you've got this lil' buddy keeping you safe.

Midnight Clock is still sexy as hell and I will fight you if you say otherwise.

Faces of the Past is a weird enchantment that feels like it was made for this deck. Lock an opponent down if you have a board full of cashiers and a sac outlet to keeps their lands tapped and your face slapped.

Theft of Dreams & Verity Circle will keep your hand full and your opponents' butts slapped. Seriously though, don't hit your kids guys. It doesn't do any good and just fosters resentment towards you in the long run.

Plan A: Summon an army of tentacle monsters, use the blue guys to tap the world da ba dee da ba di, and stomp face with Eldrazi like that one month of Modern back in 2016.

Plan B: Power Artifact, Grim Monolith & Blue Sun's Zenith. Yada yada blue combo come on use the squids they're so much more fun.

Aboshan, Cephalid Emperor is the sexiest dumbass commander since John French. Stop tapping to win, and start winning to tap. This is the worst paragraph I've ever written go away now please.

I write for Hard Drive too! Most notable achievement has been accidentally pissing off one of the guys who made Phineas & Ferb. Aboshan is my best friend, Verazol is my s.o. and new Athreos is my side piece. Follow me @growboobsownno1 to see when I write thoughtful strategic journalism.

Welcome to Flavortown - Elsha of the Infinite

Spirited Away: Aminatou, the Fateshifter