A little backstory on this column: my name is Taylor, and I love playing EDH with my friends; however, sometimes my playgroup can get a little “competitive”, which is all fine and dandy. They built their Grand Arbiter Augustin IV and The Gitrog Monster decks well and deserve to play them. It’s just a slog sometimes. Not the Gitrog Monster, that’s a Frog. The games are a slog. They can be grindy and unenjoyable for the newer players we invite to the table.

I’m a firm believer that, like a good D&D session, every game of Magic should be memorable. So, I went about building decks around weird themes and mechanics. They aren’t nearly as competitive, but they can stand up to stronger decks while still clearly conveying a silly idea. Take for example my “Chulane, Teller of Tales” Kithkin Tribal deck. That’s my Lord-of-the-Rings-themed deck. Trust me, when you win with a deck like that, everyone is having a good time laughing along with the absurdity of that premise.

And that’s what I want to bring to the EDH community at large. A sense of whimsy that no other Magic: the Gathering format can evoke. To players new and old, I introduce you to Funky Flavor EDH. Let’s have some flavor-themed fun!

And feel free to comment below with your ideas for fun themes. Who knows! Your idea might even get featured!

THEME OF THE WEEK: Doctor Who

Say what you will about Doctor Who, it’s a show that’s managed to last for 50+ years.
I know I love it. Even when the show has its low points *cough* Chibnall *cough*, I still sit down to watch. Recently, Doctor Who entered its 13th season of the revived show, titled FLUX.
I’ll be honest, it’s the first time I’ve felt invested in the plot in a long while. I recommend that you check it out if you haven’t. Spoilers, the first episode is bad, but it gets better quickly. That’s my opinion at least. Wait, what am I doing? We’re here to talk Commander!

For this deck, we’ll be taking extra turns, wheeling our hands, Suspending big spells, and just doing a bunch of wibbly-wobbly, time-y wime-y nonsense. I think the reasons why should be obvious, so let’s choose our commander!

The Doctor (of the Ghitu) 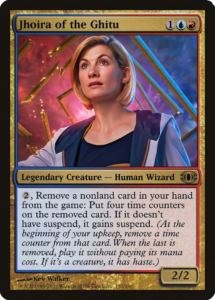 Our commander of choice is Jhoira of the Ghitu. I considered Obeka, Brute Chronologist, but she just didn’t quite fit the “mood” of Doctor Who.
Jhoira’s ability to give your spells suspend just feels better. The majority of Doctor Who stories have the Doctor slowly trying to piece all of their ideas together, waiting, and then finally springing the solution at the optimal moment. Heck, some might call that a deus ex machina, but I’m not here to moan about the sometimes-sloppy writing of the show. I digress.

One of the paths to victory in this deck will be the BIG SPELLS. These are easily the quickest way to win. By, BIG SPELLS, I mean:

Imagine these as the time the War Doctor uses the Moment, a hoard of Gangers, and the Doctor entering the Matrix respectively. These are good ways for the Doctor to win by herself.

However, these big, dramatic solutions are only some of her paths to saving the day. More commonly the Doctor whips together a solution with a kettle and some string, all while wearing a vegetable! Some people have referred to this as “Combo-ing off”, whatever that is.

However, the Doctor needs help from their companions and their tools to pull off some of these ...com..bows..., so let’s talk about some of these people and objects helping the Doctor out on their journey through Time and Space and EDH.

We’re going to want to copy spells quite a bit in this deck, which is where the TARDIS and the sonic screwdriver can help. I’ve chosen Lithoform Engine to represent the TARDIS. 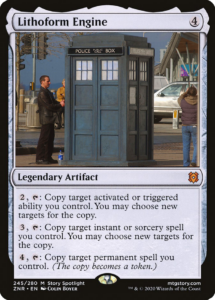 This is probably one of the more important cards in this deck. Imagine you go and Suspend Double Vision, and when it’s cast from exile, you copy the spell, and now you have TWO Double Visions with which you can copy MORE spells! Now that’s what I call value!

It also seems like something the TARDIS can do.

Let’s imagine you don’t have Jhoira on the battlefield, but you want to hard cast one of your bigger spells; you can copy it with the Lithoform Engine for even MORE VALUE. I love this card. I love the TARDIS. I’m beginning to love this deck even more. 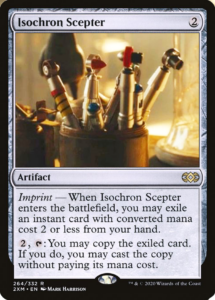 On to the Sonic Screwdriver. I mean the Isochron Scepter. I mean… Yes. That.

Our “Sonic Screwdriver” is the infamous Isochron Scepter. Many an EDH game has been rocked by the surprising power emanating from this little artifact. In this deck, as it is in the show, we’ll be using this little rod as a super-duper, handy-dandy multi-tool (Deus Ex Machina). We can use it for copying spells repeatedly by Imprinting it with cards like Galvanic Iteration, Increasing Vengeance, or my personal favorite, Narset’s Reversal. Or if you want to be a little cheeky, you can Imprint it with interactive spells, like Counterspell, Reality Shift, or Suspend. There’s also the option to Imprint our small draw spells, like Ponder, on it, but don’t do that. Unless you’re in a pinch. That isn’t value. That’s far from value.

I’ve been mostly trying to design this deck in a budget-friendly way, but if you wanted to add a card like Final Fortune and take the deck in an even more time-y wime-y direction by adding something like Sundial of the Infinite... you could. I’m not saying you should… but you could. That works with Isochron Scepter too. Just saying. Those tools are cool and all, but what about the Companions?

These companions. Enough of these double entendres!

Wikipedia refers to “Companions” as the audience surrogate in the long-running BBC franchise known as Doctor Who. That’s technically true, but here they refer to the support cards in our deck.  They help us like they help the Doctor. Let’s break down how these cards represent the characters from the show. Starting with… 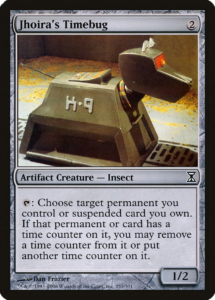 Our version of the lovable robot dog that Tom Baker was known to kick across the studio in fits of rage is Jhoira’s Timebug. A card that needs to STOP LOOKING AT ME LIKE THAT! We’re using time counters here, so removing them will help occasionally. It’s not the most exciting thing in the deck, but neither is K9. 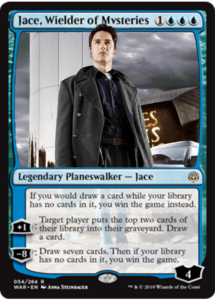 This card I’m much more excited for. Jack, Wielder of Mysteries. Huh, that works a little too well. They’re practically making the same pose.

This is in the deck because we’ll be drawing a lot of cards, and it’s nice to have a fail-safe in the case we draw our entire deck.

It should be noted that my favorite way to win with this deck is by casting Enter the Infinite while Jace, Wielder of Mysteries is on the battlefield.

Plus, isn’t Jack rather mysterious? The Face of Bo who? 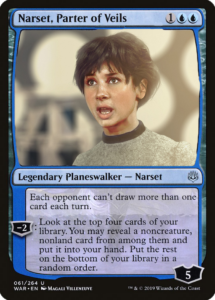 It’s Susan! The Doctor’s granddaughter. I had to include Susan somehow. She’s arguably a lot smarter than her grandparent. Maybe not as experienced, but she was clever. Narset, Parter of Veils works perfectly. An excellent student who has been thrown all about by time and space without much say in the matter. They’re basically the same person. As for how she fits in the deck, well, there’s nothing juicer than having Narset on the field and then casting Wheel of Fate. That’s a fun little combo. 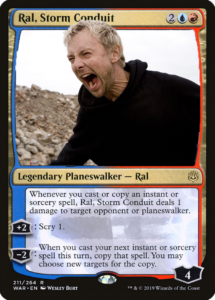 DINNER TIME!!!! Yep, it’s the Master. They shoot electricity that one time. Ral does that too, I guess. I’ll be honest, that’s about as much thought as I put into this one. I guess Ral, Storm Conduit is a little annoying with that pinging effect. The Master is annoying too. Yeah. I thought about that too and I’m definitely not just coming up with it as I type this.

I mostly put Ral into this deck because of his -2. Again, we want to be copying some of these bigger spells, and it always helps to have something on the board that can essentially do this effect for free in the case your mana is tight. 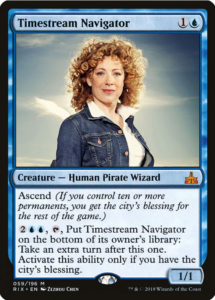 Lastly, we have everybody's favorite, River Song. No one navigates the confusing timestreams better than River Song. Timestream Navigator isn’t essential to the deck, I just like the card. It’s a monetarily cheaper extra-turn-generator, and it can always help you out in a pinch. Just like River Song.

And with that, this article comes to an end. Check out my Decklist below. I hope you come away from this with some funky ideas on how to build a Doctor-Who-themed Commander deck of your own. Remember to have fun!

This has been Clams from Commander’s Herald. I’ll be back with more Funky Flavor EDH for you soon. Allons-y!

His real name is Taylor, but everyone knows him as Clams. No one knows for sure why. Maybe you will if you ask him nicely. He's a video producer by trade. Making commercials and web content for a constant slue of clients. When he's done with that song and dance, he sidles over to his computer to continue making videos for himself and his friends. He just can't stop. It's unhealthy. If he ever does get around to taking a break you can usually find him at the bar playing a game of EDH with his buddies. He's 5'10, born in NYC, a Capricorn, and he loves to laugh. If he sounds like your type, maybe give him a follow! "The Greatest Show in the Galaxy" over on youtube.