Welcome to CUT!, the article where we take deck builders, not unlike yourself, and put them through multiple deck building challenges to test their brewing capabilities and stretch their tinkering skills. If you are new here, catch up here, if not, continue on!

Thinking back to the last article, maybe Riku, of Two Reflections is too cookie cutter of a Commander to build a deck around. It could be that he is too efficient, which limits the potential creativity from a deck led by him. If I wanted to do a fun token strategy, possibly Brudiclad, Telchor Engineer would do the trick! Though, the newly printed Adrix and Nev, Twincasters feels closer to what Riku can do, so maybe I will go in that direction. Speaking of directions, what direction did you vote in and who made it to this week's finals? Let’s find out!

What's a Finals without a little competition?

Last week we were brought three very unique decks with the set of challenges I laid before our builders. Of course, only two make it to the Finals and those two are…. 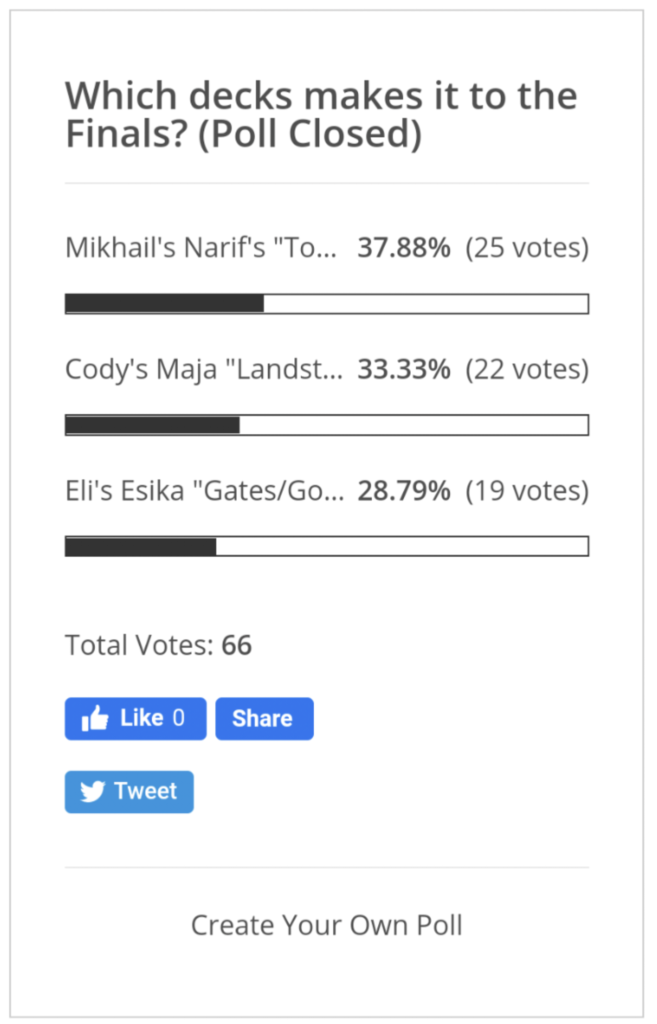 Good job Mikhail and Cody, you made it!

What a close round! Let’s give a big thanks to Eli and his Esika God/Gate tribal deck for taking us through a fun alternate win-con and a tree-full of indestructible Gods. I hope to see him in a future article.

Now onto our main event! Our finalists were given their super-secret-special-challenges for this week via email. Those challenges are as follows:

First up is Mikhail, take it away!

My take on this timely challenge has Slimefoot, the Stowaway at the helm. This fascinating fungus is relatively new to the scene but feels like it could’ve been printed in Time Spiral with some flavorful abilities. I admit I like to eat mushrooms. Slimefoot can give you incremental drain for long, grindy games or the potential to make huge armies quickly with the right token multipliers. The token-sacrifice archetype has existed in Golgari, and perhaps Witherbloom, for a long time, so leaning into the timeshifted cards doesn’t feel like a hindrance but a deep look into Magic’s storied past. Slimefoot, from a lore perspective, is timeshifted, as it grew in the reconstructed Weatherlight and became a part of its new crew in Dominaria so it only makes sense to be a part of this challenge.

They may be slow, but fungi have the natural ability to cultivate and spread when just given the right amount of time which usually equates to three turns. Most of your fungi gain spore

counters on each of your upkeeps that can be traded in for Saprolings to chump fatties or to be sacrificed for value. Utopia Mycon makes each of your Saprolings into Lotus Petals which can be useful to cast the more expensive creatures and enchantments in your list. Psychotrope Thallid can turn your extra Saprolings into card advantage in the late game. Because you want as many Saproling death triggers as you can get, it will also be worth playing Conspiracy to turn all of your creatures into Saprolings. With Saproling-tribal being a minor synergy specifically in this list, I made sure to include Vanquisher’s Banner and Verdeloth the Ancient for good measure.

Some of You May Die... But That’s a Sacrifice I’m Willing to Make

Once you make tons of Saproling tokens from your various generators, you will have the opportunity to get lots of value by sacrificing them, either one at a time or all at once if desired. Value can be in the form of additional drain from Blood Artist or Zulaport Cutthroat triggers or by converting the tokens into mana with Ashnod’s Altar or cards with Plumb the Forbidden and Skullclamp. Because creatures dying is pinnacle to this deck’s strategy, it will often be correct to save your artifact, enchantment, and blanket removal spells for your opponents’ permanent graveyard-hate pieces. I’m talking about your staples like Rest in Peace and Leyline of the Void but also niche, new cards like Draugr Necromancer and Valentin, Dean of the Vein.

The true power in this deck comes in taking the fair-on-their-own engines and ramping them up with effects that double counter and/or token generation. It’s no secret that Doubling Season ends games on its own, but it’s typically not from a lethal dose of mushrooms, so that may be new for your opponents. Vorinclex, Monstrous Raider does a great impression of Doubling Season’s second ability while also shutting off all of your opponents’ incremental counter generation (psst get out your Swiftfoot Boots if you can). Yawgmoth, Thran Physician has the ability to proliferate the spore counters on your fungi and draw cards off of tossing your Saprolings. Paying 1 life when sacrificing a Saporling ultimately gains you life with the drain from Slimefoot. “You gotta pay life to gain life” sounds like something Yawgmoth would say, and unsurprisingly I think Slimefoot would agree.

Slimefoot also has a handful of misfit friends, but what they lack in spores they make up in synergy. Pitiless Plunderer goes especially well with Doubling Season, making two treasures when any creature, including tokens, dies, and goes infinite with any free sac outlet. Syr Konrad, the Grim gives you another angle to drain and can also interrupt opponents’ top of deck tutors with a nice mana sink. Good Old Gary, Gray Merchant of Asphodel, isn’t at full power in this list but with a little recursion from Victimize or Living Death, draining your opponents for 5+, multiple times, can be backbreaking on top of all of the other life drain in your deck.

Great stuff, Mikhail! When Slimefoot stowed away on the Weatherlight they ended up being a crucial part of the ship’s journey, will Mikhail be able to tell a similar story?

Bringing it home, we have Cody!

Here in the Midwest, it's the time of year for a very fun and exciting event! You guessed it! IT'S MUSHROOM HUNTING SEASON!!! I know many of you might not have ever been mushroom hunting, but never fear, I know just what to do to help you all out. I have brought along a friend of mine and he's going to give you some tips on how to find the very best mushrooms this season! Let's meet Thelon of Havenwood and get started with our first tip!

During mushroom season, it is very important to know exactly when to go hunting. Depending on your location, mushrooms can be sprouting anytime from March to June. You've got to make sure you've given them enough time to spread their spore counters and are able to populate. Thelon knows a thing or two about this, as helping fungus grow is kinda his main thing. Sporesower Thallid also helps those fungus grow abundantly giving all our fungus spore counters each turn. Sporoloth Ancient helps our number to grow a little more rapidly than they would otherwise. He's like a little bit of fungus fertilizer if you will.

Technology can be very helpful when looking for mushrooms. Lots of digital maps showing the best locations have been created, for instance. Thelon likes to use technology to enhance his fungus friends! Corpsejack Menace, Winding Constrictor, and Doubling Season are going to make sure we get the biggest bang for our buck when it comes to counters of all types. making more tokens with Doubling Season is really nice as well!

While you're out searching for mushrooms, it's useful to know which types of trees your mushrooms like to grow under. Certain trees don't do much, but other trees really cause those mushrooms to proliferate! Elm, hickory, and ash are some of the favorites out in the wild. Thelon likes to use Evolution Sage, Contagion Engine, and Karn's Bastion to really give the most ideal growing conditions.

Along with the type of tree, the type of land is also important for finding plentiful mushrooms. Mushrooms like the troughs in land. They flourish in ravines, washouts, run-offs, and the like. If you know where to look, you can find fungus in places that you may not have originally thought possible. Spore Flower helps keep us safe. If we have any of our counter engines going, It's not hard to imagine being able to fog at least once a round, depending on who swings at you the hardest. Mindbender Spores may not look like a fungus at first glance, but trust me, oracle text doesn't lie. It is very good at locking down opponent’s creatures, keeping them from attacking for four turns. if you pair it with the flower, you can conceivably keep blocking. The little fungus wall doesn't need to deal damage to lock things down, just block them. Last we have The Ozolith. This is going to help us spread our spores around so they don't go to waste if someone harvests our mushrooms too early.

Splendid! Will Cody’s fungi come out best in show, or will they have to go?

You know what to do now. The decks and their write up’s are all lay bare in front of you. As always the poll will be below, cast your vote and may your favourite deck win! Will it be Mikhail and Slimefoot or Cody and Thelon? Check back next article to see who won and to see the next three deck builders and their “magical” creations. Located right above the poll below are the challenges for the next article, so deck builders, get building!

I will see you in the next one and remember if you don’t love it, CUT! It!

If yourself or anyone you know would like to be a part of a future CUT! Article, feel free to send an email to the.only.travis.stanley@gmail.com