Last time, we took a look back at Modern Horizons, at the time of this article’s release we have already zoomed past Modern Horizons 2! At this point it should be called Past Horizons. Since I usually theme my challenges around the latest set release, with MH2 and Adventures in the Forgotten Realms being close together, leaves little room to lag behind. This week will wrap up our Modern Horizons 2 themed challenges and next time we will dive into the dungeons of AFR.

Here are the results of the last poll: 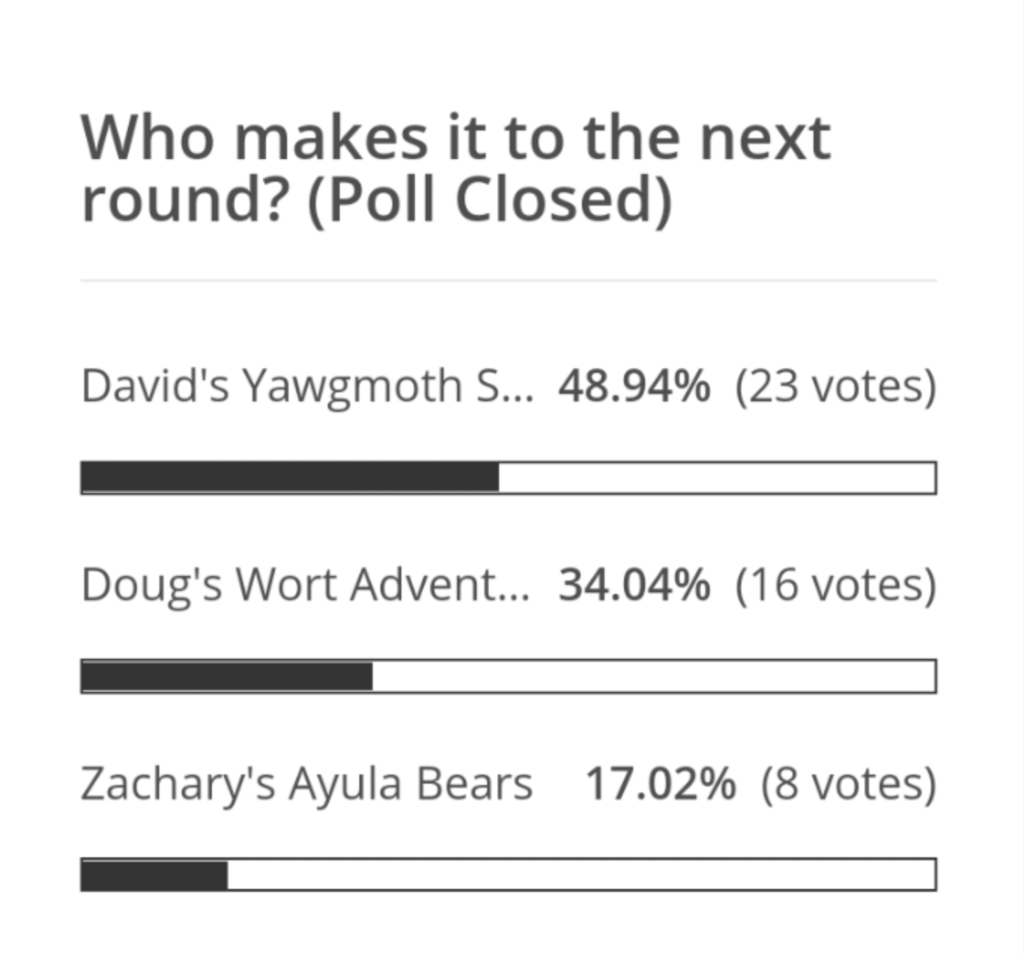 Congratulations to Doug and David, and a big thank you to Zach! Your Ayula was a fun and flavorful deck, and I hope we see you again!

Here are the challenges our deck builders had to conquer:

First presenter is Doug! Take it away!

Even as a prolifically casual builder who routinely restricts myself to aggressive themes while brewing, this challenge was by far the most restrictive I’ve ever experienced as far as the overall card pool. Even so, it didn’t take me long to decide on trying to squeeze out a mono-green storm deck with Aeve, Progenitor Ooze. I was originally drawn by the plethora of cheap artifacts like Arcum’s Astrolabe and Paradise Mantle, but the real hidden gems I found as I looked through the just 293 options in mono-green was the suspend cards. Suspend was a minor theme in the original Modern Masters, Modern Horizons, and Modern Horizons 2. This small theme left me 11 options to choose from that would eventually cast for free on my upkeep, five of which were ramp in one form or another (Lotus Bloom, Mox Tantalite, Sol Talisman, Rift Sower, and Search for Tomorrow).

Getting a free uptick on your Storm count at the beginning of a turn is already huge, but having that “free” spell come down and start making mana is even bigger. Storm in green is always going to be all about a lot of cheap ramp spells in some fashion, however, even more so when your quintessential Storm spell costs five to cast from your command zone. With that in mind, a full 20 cards of the deck are devoted simply to ramp, and you really feel it when you go turn one Sol Talisman, Mox Tantalite, turn two Rampant Growth, turn three Llanowar Tribe to set up for an epic turn four Storm turn that starts with eleven mana available and two spells already cast.

Having the mana available to cast Aeve is only half the battle, however. The last thing you want is to ramp for the first three turns of the game, and then have no spells in hand to cast meaningful copies of Aeve. To really have your five-mana commander be able to swing through for relevant damage, you need a Storm count of at least three when you cast it, resulting in a 2/2, a 3/3, a 4/4, and a 5/5. Three spells might not sound like a lot, but even if you time it with a Suspend spell (as you should), you then still have to have two more spells in hand that you can afford to pay for in addition to paying your commander’s hefty cost. In other words, we need cheap card draw effects in addition to cheap ramp!

Luckily, the Modern sets have played a key supporting role in the quest to make green into blue, and as such we have access to a couple of cantrips. Commune with Nature specifically may not get the press that Abundant Harvest does, but it will most likely draw us a creature for a single mana to keep the turn going, which is all we really need. As for Abundant Harvest, my hot take of the millennium is that it’s the best cantrip ever printed. Sure, you don’t get to look at three cards like you do with Brainstorm, but it does guarantee that you draw either a land or a spell depending on your present need, which is something that any blue mage who’s been struggling to draw into a land for three turns would kill for. Even better than those options, however, is a free tutor in the form of Summoner’s Pact which by itself makes for a great Storm turn. Unfortunately, however, outside of the zero or single mana options, the pickings are quite slim in our limited card pool when it comes to card draw. Sylvan Ranger, Expedition Map, and Glacial Revelation are only ever going to draw us lands, expensive effects like Harmonize, Brainstone, and clue tokens are essentially useless on Storm turns, and really the whole package is summed up neatly by the necessary inclusion of Runed Servitor in the deck. Still, cards will be drawn, mana will be had, and Commanders will be cast in multiple copies, so we have built a shell that will do the thing.

Only, “The Thing” is neat, but it doesn’t actually win us the game? Laying down 14 power and toughness on turn four is pretty cool, and will get you a long way in a lower powered pod, but relying on Ooze alpha strikes doesn’t strike me as a winning strategy. Still, we are in green and are planning on going wide, so combat damage is probably still our best option for closing out a game. Unfortunately, there’s only three Overrun effects in our card pool, one of which (Overwhelm) plays well with the amount of creatures we’re talking about but doesn’t actually give trample. At the very least, however, Overwhelming Stampede and Craterhoof Behemoth should routinely win games when we draw them, so there’s one win con. In similar fashion, a Doubling Season the turn before we cast our commander should absolutely be enough to take out a table, and a Duskshell Crawler with a bunch of Ooze tokens will probably get there at times. Other than that, however, there really aren’t any great options for going wide that will reliably end a game.

So, (much like what our commander wants to do) we must also go tall in addition to going wide! The other rare Storm option from Modern Horizons 2, Thrasta, Tempest’s Roar, should take us a long way there, as should the artifact-centric Nettlecyst and Lodestone Myr. Since we are already playing so many artifacts and artifact creatures in an attempt to storm out with mana rocks and Affinity, Arcbound Ravager also seems like an excellent option for putting down a whole bunch of +1/+1 counters and guaranteeing some death triggers. Lastly, since despite moonlighting as an Izzet deck we are still essentially a big dumb green brew. Strength in Numbers is absolutely going to win some games out of nowhere, and I for one can’t wait.

Thanks Doug. If you weren’t here last time, Doug is a writer on EDHREC! You can check out his stuff here.

Last, but not least, is David! Show ’em what you got!

“Captain Ripley Vance? What set was this from… MH2? Wow, I totally missed this one. Why did you choose this commander? There are much better storm options, this one is just underwhelming.” This is what the uninformed viewer might say, right before they scroll past this write-up (yes, I did this bit in the last article, sue me). I was toying around with an Aeve, Progenitor Ooze Storm deck, but I couldn’t get myself to make a mono-green storm deck. But no matter what I tried, the call of the storm was powerful. Eventually I caved, turning to the Un-commander of the set, Captain Ripley Vance.

But upon closer inspection, this is no ordinary CRV deck, this is a Voltron-Storm Deck! A CRVVS, if you will! The main goal of this deck is to cast as many spells as you can, get CRV’s power as high as possible, and attack with the biggest baddest pirate around. Throw around some damage with his ability and you have a dead table on your hands.

The Punch Before the Storm

The first game plan is simple: Make Ripley big and tough. Make her eat her veggies, grow big and strong. This is accomplished by playing equipment and enchantments, such as Bonesplitter and combat tricks such as Reckless Charge. These cards also lean into a voltron strategy, as getting CRV’s power past 11 for a two-hit kill is easy in a deck like this. There are also some burn spells in here to throw out that last bit of damage that our commander can’t deal, such as Calibrated Blast or Lava Spike. These cards were chosen because they bleed into the next category of Storm.

The Storm After the Punch

Looking at CRV’s text, we can see that she wants multiple spells being played in a turn, multiple turns in a row. 15 spells in a single turn does us no good if her ability will only trigger once. So I focused on spells that can be cast twice, like Faithless Salvaging with Rebound, Strike it Rich with Flashback, or Shenanigans with Dredge. Cards that could be cast for free like Fury or Force of Rage were added so mana can be saved for more spells or to hold up interaction. In the case that CRV’s ability/Voltron isn’t winning, we can save all our spells for a big turn, then cap it all off with a Spreading Insurrection or Empty the Warrens as a big finisher.

A few cards stand out among the rest for their versatility or power, First up is Throes of Chaos. This card not only counts as two spells every time it is cast, but it also can be cast every turn by discarding a land. When you need to cast three spells a turn, having a guaranteed two can be really handy. Grinning Ignus is another card that can be cast as many times as you wish, easily getting three spells cast each turn single handedly. Galvanic Relay is a new card from MH2. but already it is underplayed. Even just copying this once is the average rate for draw spells, two cards for three mana. But cast this as your third spell, or even more than third, and you can have more cards than you know what to do with. This is the poor man’s Jeska’s Will, which is not a bad place to be in.

This deck really boils down to playing the commander as fast as possible and swinging with the biggest pirate you can manage, while slinging spells and chunking life totals as you go. One last thing, all that mumbo jumbo about wanting a storm deck and settling on red, that’s baloney. I just wanted an uncommon commander to have an extra rare/mythic in my deck (don’t tell Travis). Make sure to yell at me for wasting a rare slot on Sol Talisman, and until next time!

Thank you all for tuning in to this week’s edition of CUT! It was a Modern Horizons extravaganza, and these decks sure showed it. I wanted to make these challenges a little tougher and I thought both of our deck builders did an amazing job. Remember to vote for your favourite below and next time we will see who won this edition of CUT!

The adventurers for next time have been chosen, here are their challenges:

Come back next time to see how they do! Thanks for visiting and remember, if you don’t love it, CUT it!

If you or anyone you know would like to be on a future edition of CUT please email the.only.travis.stanley@gmail.com

How They Brew It – The Ten Dollar Reanimator Deck