With the flurry of sets being released recently, it's a miracle anyone can keep up; it's like WOTC is moving double time to get it all out. I'm sure if you look at the past couple of years, you'd see that they've probably released double the product this year compared to 2019.

Speaking of 2019, the year that followed was 2020, and that was when the first Double Masters set came out! This set was well received, and it was also a neat innovation for "Masters" sets, containing double the rares and double the foils, making this a product to be chased. That also meant that you could open double the duds and feel really bad about the amount of money you spent on the pack.

Now WOTC is back at it again with Double Masters 2022, this time with double the collectibility! To not end up with the feel-bads mentioned earlier, do as the Professor from Tolarian Community College always says: "Buy doubles!"...or was it singles?

As you can probably guess, this CUT is themed around Double Masters 2022: "Double Double Edition"! Let's get ready to have twice the fun!

Before we get to the main event, let's find out who made it out of the Undercity from the last CUT: 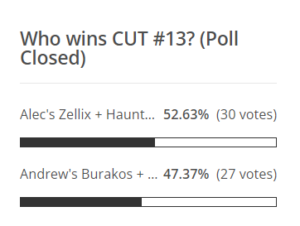 Congratulations, Alec, you did it! You won the battle of the Haunted Ones! A big "thank you" to Andrew and his entry; even though Burakos, Party Leader didn't win, you still brought the party. Thanks to everyone who participated, it was a tremendously fun round!

Now back to the matter at hand. This is the second time that both deckbuilders have been on CUT, so it's fitting that their challenge revolves around Double Masters. Here are the challenges they had to double down and work with:

First up is Lenny! Lenny last appeared on CUT #7, and now he's back and ready to , I mean rumble!

The inspiration for this brew came from searching out Modern-legal cards with the word "double". After searching through an ocean of double strike and double counters cards, I found Goblin Charbelcher. I recalled hearing on an episode of one of my favorite Commander podcasts, Legendary Creature, about a deck built around Charbelcher using Karametra, God of Harvests to remove lands from the deck until it can fire off the Charbelcher and hit someone with the remaining cards in the library. Alas, Karametra was not reprinted, so I settled on Animar, Soul of Elements since it had the colors I really wanted for this.

The bulk of the deck consists of cheap creatures that let me search up lands to the battlefield, such as Sakura-Tribe Elder, Farhaven Elf, and Topiary Stomper. There are only so many of these, so I also included creatures that find lands and put them into your hand, like Gatecreeper Vine, Sylvan Ranger, and Borderland Ranger. While these aren't as efficient as other options, having them on creatures means that they put counters on Animar and in turn have their cost reduced. Just imagine casting a free Pilgrim's Eye. To accelerate this part of the plan, I also included Panharmonicon to double the ETB triggers and Cloudstone Curio to keep bouncing creatures. Even with all this, there's a chance to hit a land after a few cards, so this seemed like a good reason to fulfill the brewing restriction and add damage-doublers, like Furnace of Rath, Dictate of the Twin Gods, and Angrath's Marauders (notably able to be cast off the cheap thanks to Animar).

Once enough lands are out of the deck, it's time to find the Charbelcher. Naturally drawing it can happen, but we don't want to rely on that, so we have Fabricate and Tezzeret the Seeker. Tezzeret has the added utility of untapping the Charbelcher if we don't need to sacrifice him to find it for us. Of course, some players don't like fun and will try to remove the Charbelcher, so I included Timeless Witness and Academy Ruins to get it back. In case of exile removal, Karn, the Great Creator is there to pull it back to hand. Any opponents crying, "Foul!" over their now-useless mana rocks should have thought of that before exiling a precious jank wincon.

Finally, I included a few things in case it all goes wrong. Animar tends to get pretty big, and as such is naturally suited to taking players out with commander damage. Embercleave, Runes of the Deus, and Temur Battle Rage give double strike and trample, making it pretty easy to knock a player out of the game, and since we have all these small creatures, we might also be able to finish a player with Savage Beating. Lastly, we can use Seismic Assault or Borborygmos Enraged, too, alongside Trade Routes, to discard a bunch of lands and finish opponents that way.

Thanks for the submission, Lenny, I hope it lands you a bunch of votes! You can go and check out Lenny over at EDHREC, where he writes the Power Sink article series!

Going second is Doug! Last time Doug was on CUT, it was only CUT #4. Let's see what Doug brought to the dual!

My favorite card in Magic is, and has been for some time, Arcbond.

The only thing more fun than one Arcbond is two! Unfortunately, at least as of yet, Wizards hasn't found a way to copy spells that include the word "double". Luckily, if you manage to double damage, then each Arcbond trigger will still double the already doubled damage, making things mighty interesting, very quickly. If the creature you're targeting with said Arcbond so happens to be a Stuffy Doll variant, well now you're just doing maths. Let's see, one doubled is two, which gets doubled to four, but that happens twice, so it's eight... wait, how many of these Pyrohemia activations were you planning on, anyhow?

But sadly, the world is not made of Stuffy Dolls and Brash Taunters, and there's only one Arcbond, so a deck has to find a plan B. Enter Atla Palani, Nest Tender! With a lot of damage-doublers and damage-redistributors costing a lot of mana, a means to Polymorph them onto the battlefield is extremely welcome, especially since we're already playing a bunch of packages that will be able to destroy the 0/1 Eggs, such as Forerunner of the Empire. Incidentally, since we're already playing the Forerunner, we may as well include some Dinosaurs with Enrage triggers, like Ripjaw Raptor, Silverclad Ferocidons, and the infamous Polyraptor, as well as some Changeling "Dinosaur Eggs'' that can be both searched for and destroyed by Forerunner of the Empire.

In addition to Forerunner of the Empire, there are another three or so creatures that contain some variation of the text "whenever a creature enters the battlefield, deal one damage to a creature", and the best of them, by the way, is easily Marauding Raptor, which feels like a cheat code for the deck, both making your creatures cheaper and automatically killing Eggs and proccing Enrage triggers.

Short, sweet, and full of rage! Just like a burn spell! Thanks for submitting, Doug. You can go and check out Doug over on EDHREC, where he writes the Too-Specific Top 10 lists!

Last but not least, we have Jake FitzSimons! As with Lenny, we also saw Jake last time in CUT #7. Alright Jake, what's your second take?

When Travis approached me for another CUT challenge, I was excited. I'd taken the crown via democratic vote the last time I competed, so why wouldn't I say yes to another one? Then I saw the restrictions. "Modern-legal". Again.

As a cEDH player, I've grown awfully fond of cards from the 90s. Never mind the power level, some of the coolest cards ever printed come from a much earlier era. Fine, I thought. If Travis is going to double up on the Modern restriction, I'll take the rest of his restrictions and double them. That'll show him.

I present to you Kaervek and Obosh: Double Trouble. I've taken inspiration from the fun I used to have with a Mogis, God of Slaughter punisher deck that I'd pull out to groans or grins, depending on how much energy my playgroup had left in them.

The goal here is to begin with itsy bitsy threats that won't raise any eyebrows and have them grow much bigger with double strike and double damage effects. It's possible to turn single digit damage into triple digit damage with the right combination of enchantments and creatures, but just getting into double digits will be enough to put some serious pressure on the table.

I'll admit, there's too many ways to give double strike. Unfortunately, they haven't yet made triple or quadruple strike, but I'm crossing my fingers for a black-bordered version of Three-Headed Goblin in Unfinity. Until then, this deck has so many ways to give out double strike that you're doing something wrong if you don't have it on just about every creature, and that's to say nothing of how many creatures already have it:

My favorite is Charging Tuskodon, the double-striking creature without double strike. The fact that it almost has double strike actually works in the deck's favor when it starts giving it true double strike. A double-striking Charging Tuskodon will deal two instances of eight damage. Not bad, but let's add Obosh. That takes it up to 32 damage. Add one of our major doubling effects, and now you're at 64. I'm basically just describing what "double" means, but an illustration of how nutty the damage can get is the sort of thing that gets me excited about Obosh decks.

Beyond the doubling, I've filled this deck with cards that share a similar vibe to Kaervek. I don't necessarily want to stop my opponents from doing anything, I just want to punish them for doing it. Want to cast noncreature spells? No dramas, but Scab-Clan Berserker will tax you for it. Looking to draw cards? Pay Underworld Dreams its due. And don't even think about doing anything funny with lands while Zo-Zu the Punisher is hanging around.

Tainted Strike is just too cheeky not to include. Taint any creature with enough damage-doubling strikes to hit ten poison counters, and you've got yourself a kill out of absolutely nowhere, not to mention one of the few answers this deck has to massive life totals. Even easier is sticking it on Heartless Hidetsugu for a quick KO on whoever you like, and if someone is ever bold enough to cast a 10-mana spell, you can throw Tainted Strike on Kaervek.

My whinging and whining about Modern-legal aside, this was a fantastic challenge. Thanks for having me back, Travis, and good luck to the other contestants!

No, thank you, Jake! That was a double down on doubling what I had previously (unintentionally, mind you) challenged you with, and it was great! If you haven't already, go and check out Jake FitzSimons' articles on cEDH here on Commander's Herald.

A "thank you" twice over to our lovely deckbuilders and their wonderful creations. Make sure you go and check out their articles on EDHREC and/or right here on Commander's Herald. You know the drill by now: vote below for your favorite and who you want to see in the next article! Remember, if you wouldn't love to double it, CUT it!