My Revising The Rules series has largely focused on how I think the RC could change the rules to improve the health and diversity of Commander at large, but today’s article is an appeal to the designers at Studio X, formerly known as R&D.

As Magic grows and Commander expands alongside it, color fixing gets better and better and so do multi-color commanders. Any card that requires different colored pips is naturally more powerful than one that doesn’t, given you had to work harder to make that mana. But how hard do you really have to work for your mana in Commander? Is there ever a downside to running multi-color good stuff piles these days?

In the last few years we’ve seen triomes, snow duals, MDFC duals, the rest of the bond duals, the new slow cycle from Innistrad, and, of course, the now ubiquitous Arcane Signet. And that’s not to mention a cardpool of color fixers that stretch back to 1993.

Now, don’t mistake me for thinking this is a bad thing. Having a growing pool of affordable and accessible mana sources is a very good thing. Nobody enjoys getting mana-screwed and I’m glad players are being given the tools for their decks to function. I’m a fan of Command Tower for this very reason, as even though it’s an auto-include in every multi-color deck, it improves gameplay and smooths decks out.

But what I worry about is the growing collateral effect this has on the power and popularity of mono-color decks.

One Is The Loneliest Number

In traditional formats, being on fewer colors allows for a more consistent and less painful land base. But, with a life total of 40 and just about every land ever printed being legal, these advantages just don’t translate to Commander. I’d argue it is only slightly harder to access two or three colors in Commander than it is one. In fact, as far as mana production goes, mono-color decks can have a harder time than their counterparts.

Take a look at the options a mono deck has when it comes to mana rocks. In 2021, two mana rocks are all the rage and most players eschew anything at three or more. But, weirdly, it’s multi-color decks that have the good two mana rocks. If I’m playing a red only deck and I want a rock that produces red mana, I’m forced to run clunky cards like Coldsteel Heart, Fire Diamond, and the somewhat inconsistent Fellwar Stone. Just adding one more color would get me access to the vastly superior signet and talisman cycles. This has never made sense to me.

Why are multi-color decks getting better access to mana than mono-color decks? Shouldn’t the decks that want just one type of mana have an easier time of it? There is of course the medallion cycle, but the medallions are prohibitively expensive for the majority of Commander players. Said medallions can also be just as powerful in decks with multiple colors that lean on one specifically.

The problem is, while multi-color decks keep getting better mana-fixing and already have so many inherent advantages, mono-color decks lack the tools and incentives to keep up. Even going from one color to two colors will more than double the amount of colored cards available to you.

If my arguments don’t compel you, I’ll turn to what precious little data we have. Looking at EDHrec’s top 50 commanders, only three mono-colored legendaries make the list. Stretch it to the top 100, and it’s still only eight. It’s hard to say what an ideal number would, but I think this is indicative of mono-color’s unpopularity.

You Win More Fliers With Honey Than Vinegar

But Jake, what about Blood Moon? What about Back to Basics? What about Ruination? Well dear reader, like you, I’m also a fan of running cards that make the entire table groan. But unfortunately, these cards are only appropriate in sufficiently powerful pods and do little for mono color decks at large.

They’re also cards that punish players for playing cards necessary for their deck to function. Such effects have their place, but I would rather see mono-color players rewarded than multi-color players punished. I’d prefer to add something that makes my deck better than something that makes my opponents’ decks worse. Case in point, if I knew my local meta was full of blue players, I’d turn to Carpet of Flowers before I considered Choke. I want rewards, not repercussions.

Thankfully, we’ve seen WotC start working in this design space: the powers that be are at least somewhat aware of this problem.

Props To The Designer

I wish Commander had more cards that encouraged you to play fewer colors. Commander’s Plate and War Room were a step in the right direction, but the format needs more. Props to whoever designed these!#edh #mtg pic.twitter.com/xgDdVPCwat

The overwhelming support for this sentiment quite surprised me. People were excited for these cards when spoiled, but they haven’t made the splash many hoped they would. We’ve seen this vibe of card before in Endless Atlas, but never so explicitly as with Commander’s Plate and War Room. I was thrilled when they were spoiled, but quickly disappointed when I realised they were the only two in the set.

I should give a dishonorable mention to Jeweled Lotus, as it looks like it should incentivise mono-color decks but is just as useful for multi-colored commanders that cost a lot of mana. It is also great for putting cheap commanders like Najeela, the Blade-Blossom and Sisay, Weatherlight Captain into play, which despite only costing a single color to cast, helm five color decks. It’s also outrageously expensive, but I digress.

Commander’s Plate and War Room are almost precisely what we need because they can’t be co-opted by multi-color decks. You don’t need to be in a mono-color deck to make great use of devotion cards, nor to break Cabal Coffers, nor even Endless Atlas. But cards like these two from Commander Legends simply read “this is better the fewer colors you’re playing.” In a world with Kenriths and Morophons and partners and an upcoming shard set, we really need cards that give compelling reasons to eschew more colors.

Not Quite The Answer?

It’s a shame we’ve only seen two cards like these, but I’d like to think they’re a teaser for what’s to come. It seems like such a rich design space to explore. Having said that, the power level for War Room leaves a bit to be desired. It’s too conservatively costed and the drawback for being on multiple colors is too mild. At 40 life, paying a little extra just doesn’t matter that much.

Commander’s Plate is much more pushed and gets significantly better with each color you don’t run. But it lacks universality. Not every mono-color deck is commander-centric enough to want protective equipment that costs twice as much mana to get going as Lightning Greaves, and while +3/+3 is fine, plenty of decks just aren’t that fussed.

What I’d like to see is not just more of these styles of cards, but more universally useful and widely accessible. Mono-color decks don’t just need more powerful cards, they need cards available on a budget.

The problem with Commander’s Plate and War Room – despite how I love them so – is their rarity. Plate in particular is just too expensive to help mono-color in a meaningful way. I firmly believe that cards specifically designed to help out the underdogs should be made as accessible as possible. Commander’s Plate has not taken off the way I hoped it would, but had it been just a little stronger, it would have been disappointing to know that it was out of reach for so many players.

I think what mono-color decks really need is a boon akin to Command Tower. One of the first cards ever designed specifically for Commander, it did instant wonders for improving the manabases of every color combination. Combination, mind you. It did diddly-squat for mono-color decks, and I’m still bitter about it.

But crucially, it was made widely available and gets reprinted in almost every Commander product you can think of. The same has since been true of Arcane Signet. But I’m in favour of something drastic. Something pushed and powerful and perennially useful. Imagine if mono-color decks had an affordable auto-include? Imagine if there was…

The Only Custom Card I’ve Ever Made 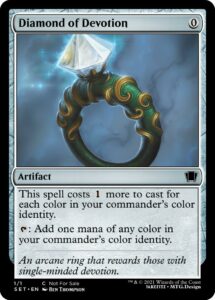 Art by Ben Thompson, design by myself

I realise Studio X will never make this card, it’s simply an example of the kind of thing I’d like to see designed. A great boon for mono-colored decks, a functional reprint of Arcane Signet for dual colored decks, and a borderline useless mana rock for anything with an identity of three or more – about as useful as Manalith is.

It’s colorless, super powerful where it needs to be, and if I had my way, it would be a common. Something like this should be universally accessible and as far from a chase card as possible. I’ve even worded it with Legacy and Pauper in mind – if you don’t have a commander, this produces nothing. Unfortunately, that also means it won’t produce mana in a colorless deck, sorry Kozilek, the Great Distortion and Traxos, Scourge of Kroog fans.

Would this become a must run staple for mono decks? Absolutely, at least if you’re building your deck with optimisation in mind. It’s almost a Birds of Paradise with haste that any color has access to. I won’t deny for a second that this is seriously pushed, but it crucially only helps a small portion of decks. Green has the least use for it, but it’s the color that needs the least amount of help by itself.

I’m Not A Designer

I don’t pretend to know all that much about card design, and if you loathe Diamond of Devotion, please don’t let it detract from the point I’m trying to make. Maybe we do need more cards like Commander’s Plate and War Room. Maybe we need less cards like Kenrith and Najeela. I know the RC have spoken with Studio X about avoiding more cards like Golos, Tireless Pilgrim (RIP to a real one). Maybe mono-color legends designed for Commander need a more deliberate push and more colored pips to make them harder for multi-color decks to splash for. If nothing else, give me more legends that cost (W)(W)(W) or (R)(R)(R) instead of (2)(W) or (2)(R). Show me what devotion to a single color can really bring to the table.

Where To From Here?

I’m not sure what the exact solution is. All I know is that as a fan of mono-color decks, I’d like to see some powerups and I feel we’ve been left in the dust with the way card design is going. Printing less multi-color goodstuff commanders is one thing, but short of bans, it doesn’t make the existing multi-color options any worse. And I don’t want them to get worse. I just want mono-color decks to get stronger. But as usual, that’s just my take on things.

What do you think? Have you noticed a slide toward more multi-color legendaries in your local meta? Do you prefer mono-color decks to multi-color ones? Are you, like me, hankering for more powerful mono-color tools? However you feel, I’d love to hear it. Let me know in the comments or reach out to me on Twitter at @Jake_FitzSimons.

Jake FitzSimons is a writer from Sydney and a certified Magic tragic. He’s a Johnny, a Vorthos, and a Spike, in roughly that order of importance. When he isn’t chewing his mates’ ears off about the latest deck he’s brewing, he can be found juggling, practicing piano, or doting on his cat.