Believe it or not, losing is a big part of EDH. Scientifically speaking, you're going to lose a lot: 75% of the people in every pod are going to lose. Yeah, we did the math.

Unlike traditional 1v1 Magic, how you lose is sometimes just as important as how you win. Taking down the archenemy with your sinking ship is technically a loss, but a satisfying one nonetheless. It's often said that how we lose shows a lot about our character. In the case of 12-month old Jackson Aldren and his father Liam, the whole "having character" thing is a bit of a work in progress.

"Being a Mom, I'm used to a lot of crying, kicking, and screaming," Susan Aldren said. "I told him it's okay and that he's having a lot of big emotions that might be tough for him to handle. Throwing toys, stomping around. You know, the usual. I've been doing some reading about it, and sometimes it's best to just let these things run their course. He simply doesn't have the emotional maturity to channel his feelings in a healthy way. He'll get there one day. At least that's what everyone on the internet is saying. I'm just worried the baby is going to see this kind of behavior and replicate it."

Liam Aldren was gifted a "Forces of the Imperium" Warhammer 40K Commander pre-con from a friend. As a former Warhammer 40K player, it was believed that learning a new game with cards from his beloved IP would bring joy.

"It's not fair," Liam said, recounting his most recent game of Commander with friends. "They attacked me more than anyone else. It's not like they weren't aware either. Anytime anyone attacked me, I was sure to let them know they were being rude and that I had already been attacked this game. They kept giving me excuses like, 'You have no blockers and the most life.' I don't buy it. They were just being mean to be mean because I called everyone out when they were playing cards I thought were too powerful or unfair. No one else seemed to want to speak up, so I'm basically forced to! And being attacked is the thanks I get? Stupid and not fair," Liam said stomping his feet.

Fed up with his nonsense, Baby Jackson decided to take matters into his own hands. With a large community of parents on Reddit, Jackson hoped a solution to his family's current predicament could be found.

Looking for advice on a, uh... child's temper tantrums. It's getting harder and harder to snap him out of it once he gets going, and sometimes it can last for days. Obviously these things happen and we want to be as constructive in handling them as possible. Any advice would be welcome! Thank you in advance.

As Jackson looked for answers online, Susan tried her best to coax Liam out of the playhouse to eat something. She believed that part of his grouchiness stemmed from his low blood sugar, saying, "He gets that way when he's hungry." 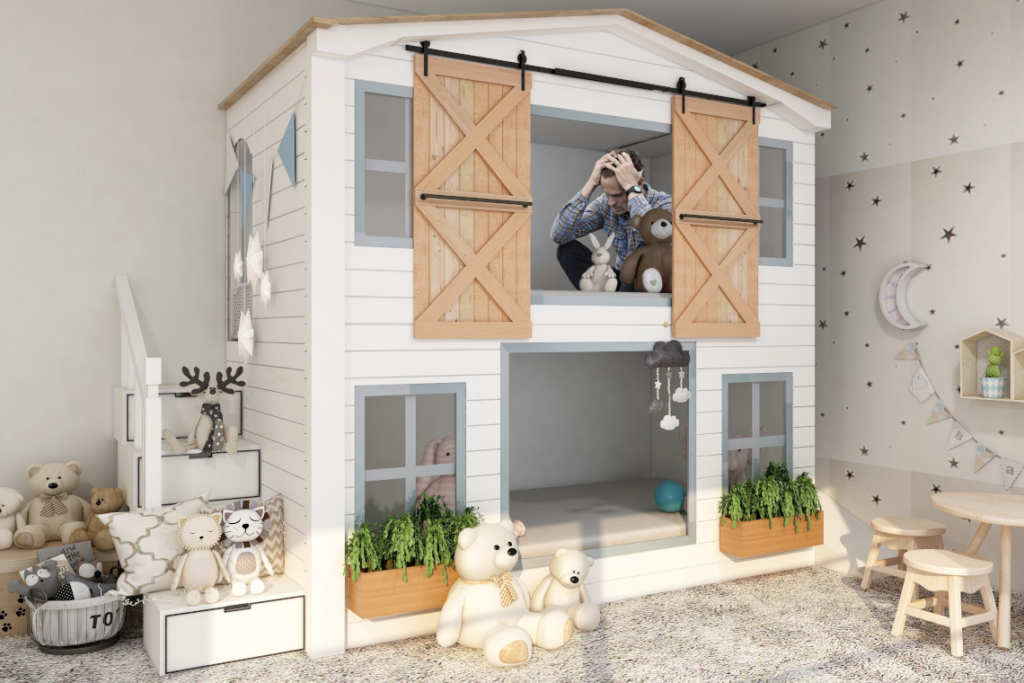 "I don't wanna," Liam whimpered from the back of the playhouse. "You don't get it. It's not fair. No, I'm not hungry. I'm not," he huffed, kicking the small stuffed bunny. "I'm never coming out. Not ever."

Fed up, Susan retreated to see if her 12-month old had any luck with his search.

Baby Jackson entered his playroom where Liam was still holed up. Susan executed the plan.

"Hi, Sweetie. I can see you're really disappointed that you didn't win your game. It's really hard to accept that you're not always going to win. But I bet deep down you had fun anyway didn't you? You like seeing your friends right? I bet they were having fun. You take as much time as you need to feel your feelings, but I'd like to have you come out of there and sit in a special "Calm Down" chair that is going to help you a lot. Try and take deep breaths. You can come out whenever your ready. And I tell you what, there's a hug waiting for you when you do."

Baby Jackson pulled his Mother by the hand out of the room, realizing giving space just as important as providing positive reinforcement.

At time of press, it turns out that Baby Jackson's plan worked, as Liam, eyes swollen and red, emerged into the kitchen asking for cookies and milk.