“And his shirt doesn’t even fit right!”

This week, what happens when a new deck surpasses your expectations?

So I built an Azorius flash deck helmed by Ephara, God of the Polis. I go to play the deck against some people without testing it, only to find out that I had built an abomination.

We all have the rule zero conversation, and I mention that I’m not sure what power level my deck is since I’ve never played it before, but I assure the other players that there is no stax or anything like that. About halfway through the game, I found out that I didn’t put very many win conditions into my deck, and the more controlling nature of my deck started grinding the game down. One player in particular was upset at how I was continuously bouncing and flickering my Reflector Mage to bounce their creatures, and ended up resigning in frustration. After that, the game started going even more slowly since I wasn’t really doing anything other than drawing cards and playing small creatures. After many minutes, another player finally casts Aetherflux Reservoir and wins the game. We all said good game but I could kind of tell that no one was enjoying themselves throughout the game.

Out of the two remaining players after the one player resigned, one of them was really vocally upset at how they couldn’t do anything.

So am I the Bolas for just slowing down the game with an untested deck?
Thanks,
Ephara Player

I’ve been there, buddy. It’s not a great feeling. You build a deck and it’s time for its debut, but because it’s the first game, you don’t really know how to evaluate it.

First games with decks are supposed to be learning experiences, which is true in this case: you learned that you have very few win conditions and that other players don’t like being dropped to a stalled board state.

I’ll tell you frankly, this happened in a game with my Aminatou, the Fateshifter deck in what was supposed to be a quick game. It’s a superfriends build with planeswalkers being the wincon, but with other value creatures there to protect and remove to keep them safe. When all I draw is the control side of the deck, it’s very difficult to not grind the game down. It’s unfortunately a big part of the Azorius color pair. I say unfortunately, but I know lots of people like that playstyle. When that’s the game I feel up for playing, that can be fun. I get it! However, it seems like in the case of your Ephara, God of the Polis deck and sometimes in my Aminatou deck, the control stuff is a means to an end. At least with Ephara, the dang thing can become a 6/5 indestructible beater to close things out. Altar of the Brood is one of my fave back up wincons in Aminatou.

This reminds me of the very first Am I The Bolas? where the player writing in continued to bring back Elesh Norn, Grand Cenobite to control the board because threats kept bubbling up and they needed to stabilize all while drawing basically only lands and recursion if not using Volrath’s Stronghold to bring the Praetor back to the top of the deck.

In that article, I couldn’t decide. They didn’t have many choices, their deck wasn’t doing the thing, Norn was the only thing keeping the others from popping off.

In this case, Reflector Mage was the Elesh Norn. With the draw engine of Ephara and the Mage being bounced or flickered, it’s pretty clearly stall tactics until you can comfortable gain an upper hand.

I can understand the player who scooped. I also can understand the vocally disappointed player who remained. Having to play cards only to have them bounced back and also disallowed the next turn is a frustrating experience. With no visible win condition or sign of one, playing against a controlling deck like this is more Sisyphean than Archenemy puzzle.

There was this guy at the first ever LGS I went to back when I started playing again. I didn’t have a playgroup, I didn’t know people who played Commander. I went to a little shop in Terrebonne (who’ve since sold to new owners, who are rad as hell – Shout out to Le Coin du Jeu) where I sat with people I’d never met before and played my first game of Commander outside of the few people I knew already.

One guy had been playing since Alpha and played an insanely powerful Erebos, God of the Dead deck running every tutor and interacting with everything. The game ended with a Bubbling Muck, Rain of Filth, and Exsanguinate. He played the deck just as oppressively: nothing stayed on board. He had an answer for everything. We played for an hour and change while myself and another player were figuring out what cards interacted with what. He was calm and patient, explained things to us, but still absolutely destroyed us. Complete annihilation. He won. He beat us handedly. We didn’t get to do much, we lost, but the wheels weren’t spinning. I felt fine about that game. Not really stoked, but not upset either. That’s not the guy I want to talk about.

The one I remember less fondly is a guy who loved Trollface in rage comics (yeah, whatever, I’m 30). 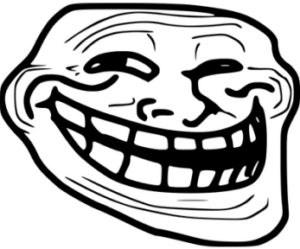 For those unfamiliar with Trollface, it’s this guy. A pain in everyone’s butt who kills himself laughing about how annoying he’s been. This li’l trash bag is so stoked when people are angry.

Playing in a three-player pod against me and the other new player, he pulled out his Zur the Enchanter deck. It turns out to be an Astral Slide deck, which I thought was really cool. However, it was also a pillowfort deck that shuffled players’ graveyards into their libraries, Ghostly Prison effects were always in play, Greater Auramancy prevented interaction, and Counterbalance and other counter cards were plentiful. He would blink Arbiter of Knollridge every turn. The only way for anybody to win was not through damage, nor was it through mill, nor through a big spell. It was long and painful. He was going to kill us with commander damage from Zur. No pumps. And often times using Reconnaissance to avoid even damaging us. Every turn, he asked me and that other player if we conceded. We’d try and try and try. Eventually, I said that I had stopped having fun a while ago and this isn’t worth my time. I conceded and left and heard him calling me a sore loser and baby in French.

You weren’t that guy. But I can see how it can feel a fraction of the way there. Blink shenanigans are powerful and lead to longer games. Azorius leads to games where people get to do less or have to deal with being interacted with more.

I don’t think you were the Bolas intentionally, but after a while of flickering the Reflector Mage and spinning your wheels, were there no political outs to take? Was there no way to turn your beefy commander into a creature and smack face?

This was the deck’s first outing. Lots of lessons get learned in that first game and you definitely have shown us that you have learned some.

The ways in which you can improve the experience for yourself and your opponents would be to up the amount of wincons, even if it’s as boring as Approach of the Second Sun! I’m not a fan of alt win conditions, sue me! Get goofy with it! Force a tie with Archon of Sun’s Grace and Enchanted Evening! Altar of the Brood into a Temple Bell!

I bet the deck will find its footing and you’ll have a great time playing it again in no time.

I believe in you and where your heart is at.

Thank you so much for writing in. I appreciate everybody who does so, so much. I also very much appreciate you reading.

Sound off in the comments about what your most frustrating game has been and show the Ephara Player they might not even have scratched the surface! Or maybe this is the worst thing you’ve heard? Let me know.