This column is for all of you out there who have ever played some and wondered if you were the bad guy. I’m here to take in your story with all of its nuances so I can bring some clarity to all those asking, “Am I the Bolas?” Whether it’s because of a mean play or even just getting bored with your playgroup, I’m ready to hear you out and offer advice. All you have to do is email markcarbonza@gmail.com!

I’m Mark Carbonza! I’m the guy who thinks you don’t have enough dice! Go on and get some more, bud! You know you need ’em! 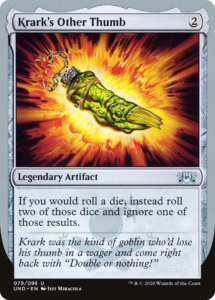 This week, a submission from our very own Corbin Hosler on an episode of Brainstorm Brewery on which I was the guest!

(transcript edited for brevity and clarity)

I am aware that some people don’t like that playstyle. That’s not my question. My question is if targeting somebody who is in a bad board state because you are salty because of their past actions makes you the Bolas.

I had no board. My stuff had been killed. All removed. Others still had stuff, one of my opponents had, like, five creatures in play. Another pointed some kind of removal spell at an irrelevant card I had. I asked why, he said, “Because you wrathed my board,” so I think “That’s a sunk cost, man. That already happened!” Now what’s going to happen is I’m about to top deck discard spells that won’t do anything anymore.

Not for nothing, this is the same playgroup that absolutely nailed me on a missed trigger that was pretty impactful. We have intensity. The idea is, we play to win the game.

So what’s your take?”

CORBIN, WE ALREADY TALKED ABOUT THIS!

I’d like to begin by saying thank you for having me, I had a blast. Brainstorm Brewery is a Magic podcast I’ve been listening to for a long time and to be a guest… I’d have never guessed in a thousand years I’d get to do that.

I mean, look. Discard and control are playstyles and strategies that have their fans and their critics. I actually play an Anje Falkenrath discard deck, and I love it, but I break it out only at tables that are really ready for it. If you’re going to take away people’s resources, you gotta find a way to end the game. Folks don’t like sitting at a table to play a game and then being denied the play part.

That said, to answer your actual question, I think folks will be more or less split in this edition of the column. Let me be clear: this column is about my opinion on situations brought to me. I am not the end-all-be-all on all this. If we have differing opinions, great! Let’s chat. In this case, you have exactly what I got, which is Corbin telling the story and asking his question. However, a lot of my interactions with folks writing in is that I have to keep some details obscured as to maintain anonymity. Believe it or not, playgroups might have more than one person reading this column.

Personally, though? Your pals aren’t the Bolas.

Yes, you’re being targeted and yes, you aren’t the optimal target. BUT! Eventually, the discard spells you top deck will be relevant again. I also can’t fault your opponents for sending a message, but most importantly doing their best to ensure what or who took their hands and boards away can’t do it again. People get salty about their resources getting messed with! What can I say!

The biggest thing to recognize is a concept I’ve picked up from my reality TV obsession and begun to port into my Magic obsession:

I used to watch a lot of Big Brother. I’m talking watching season 2 to 22, never missed a season. I haven’t kept up recently, though. There is a player named Paul who was a runner-up twice. Both times, he won competitions, he had the biggest threats eliminated at the right times, he did everything right to secure the win.

A little backstory: Big Brother is a reality competition show where strangers enter a house and fight to stay in it. Houseguests get nominated to the chopping block by the head of household, and the other guests vote to evict one of the nominees. By the end of the season, the final two remaining houseguests are in the hands of the jury, the last 7 houseguests evicted. They vote on who gets the big $250K with a win.

Paul did everything right, but was runner-up to players that many fans would consider “floaters”, aka people not making big moves and are just along for the ride (debatable for Nicole, Josh is 100% a floater). Why would Paul not win?

Well, he didn’t do everything right. He forgot about jury management. People Paul had evicted knew he was behind it because Paul admitted to it in messages delivered to the evictees. Paul went back on deals, was a big personality, and went from having friends to not and then to having them again. Watching Paul is a wild ride. I think he’s a great player, but his inability to manage the jury only got him second place.

See what I’m getting at yet?

You’ve gotta expect some sort of consequence for what you brought down to the table. Sometimes, the consequence is victory, other times, it’s getting hit with the five creatures that survived a board wipe after everybody’s hands are gone.

Thanks for reading, everybody!

If you have a story that you’d like me to weigh in on, please send a message to markcarbonza@gmail.com!

Have a good one 🙂 xo

Am I The Bolas? – Would You Use it Against Me?

Portrait of an EDH Mind – Hobbes

An interview with Callahan, founder of Major League Commander