Image from The Lion King © Disney

Welcome to Alter of the Brewed, the article series where we build the most thematic Commander decks in all the animal kingdom. Today we're building perhaps our first villain-focused brew featuring Scar and his hyena henchmen from Disney's The Lion King. Queue the music and roll that African nature footage!

Commanders Straight from the Elephant Graveyard

The Partner mechanic in Commander has historically been drenched in discourse and drama. Some love getting to have a tag team in the zone, others will say the mechanic on the whole was a mistake.

I'm giving you this brief history lesson because I remember seeing those five Partner With pairings and immediately being struck with the thought that Yannik, Scavenging Sentinel was very specifically a Hyena, which is not a creature type we see often (only 5, according to Scryfall). And Nikara, Lair Scavenger, who paired with a Hyena, sure seemed reminiscent of Scar from The Lion King.

Thus, the seeds for this week's deck were planted. 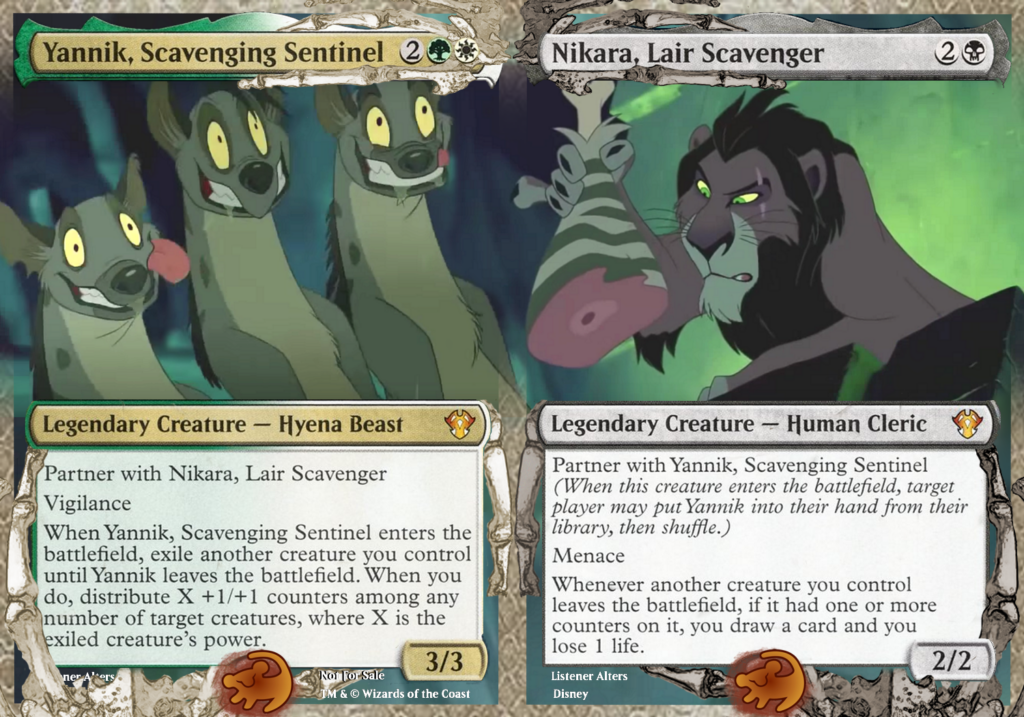 I Just Can't Wait to be King

There are many pieces of the cultural phenomenon The Lion King that make it the timeless force we know and love. While the great music and the antics of Simba, Timon, and Pumba tend to be the most resonant, The Lion King is also at its core a story about a struggle for power, a wrestling for the crown. And because a time lapse happens right in the middle of Hakuna Matata, which has its own hypnotizing genius, we might forget that there are years, perhaps decades, of Scar's reign that we don't see. We know in the end he loses his power, but surely it wasn't easy for such an unpopular lion to rule in the stead of his greatly respected brother.

With the deck we're building this week, you will play as Scar fighting to retain his turbulent throne.

I began building this deck by searching Scryfall for all of the cards that mention Monarch in their rules text that fit within Yannik, Scavenging Sentinel's and Nikara, Lair Scavenger's color identity. I added them all to my decklist on Archidekt, and then once I had all my other pieces in place, I whittled down my list to 100 cards.

What I realized in that process was that there were so many creatures in the history of Magic that were appropriately typed to fit within the animal kingdom that I could intentionally cut out Humans entirely to make this deck even more thematic. It really does feel like our creatures are recruited right from the cast of the film.

This deck also wants to do lots of flickering (exiling and then returning) of its creatures, and again, because of the deep backlog of cards that exist, we really were able to land on important pieces of story, theme, and setting with our staples.

Can you see how easy it is to make these analogies? Can you guess them all? (Be prepared, some might make your eyes a little misty):

The Teleportation Circle of Life

You love it when a plan comes together.

In this case, Yannik & Nikara want us to do lots of flickering of creatures. This won't win a game on its own, but it will once we have enough payoffs for these effects. Serendipitously, flickering is also perfect for cards with the Monarch mechanic, because every time they re-enter the battlefield, you'll reclaim your throne.

So that's our gameplan in a nutshell. First, we'll use Yannik, Scavenging Sentinel and other similar effects to exile and return our stuff.

Next, we want to make sure that we have plenty of rewards for flickering our creatures, whether it's a valuable target, or another payoff card.

Some of these payoffs are going to make us the Monarch again if we've lost the throne at any point so we can continue to keep our card advantage going as consistently as possible.

We also want a few ways in addition to Yannik, Scavenging Sentinel to get some counters on our creatures so that Nikara, Lair Scavenger will draw us cards.

Then, our plan is to win through either an overabundance of value via flickering and card draw, or to put Yannik's ability to good use and trample over our enemies with a giant stampede. Let's be honest: this is the Scar way. The table will find out quickly that being a villain has its benefits.

Rule with an Iron Paw

That about sums up what I'm sure identically matches Scar's ruling tactics before Simba returned and so unfairly and traitorously usurped him. Give this list a go for yourself, and let me know if you made any changes. Have some thematically suited power upgrades? Found a great analogy to The Lion King that I missed? I want to hear about it.

Don't forget, as of today, you can find this decklist along with all the other Alter of the Brewed lists; we've created in this handy folder over on my Archidekt profile!