As Modern Horizons 2 previews have entered full swing we have seen plenty of cards sure to shake up Magic’s landscape. From legendary Merfolk gods to characters only seen in flavor text before the set is brimming with excitement.

The Legends from Modern Horizons 2 Previews

Wizards of the Coast kicked off the legendary creature offerings with a bang when Mark Rosewater previewed the “nuttiest,” commander yet. 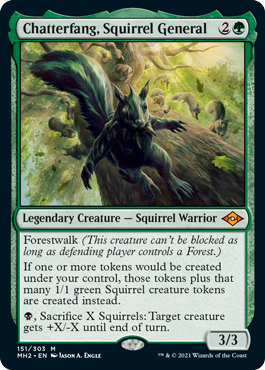 Chatterfang, Squirrel General finally gives players an outlet to play with a legendary squirrel in the commander zone. Aggressively costed and with build in evasion for one of the most player colors in Commander, expect Chatterfang to show up early and often at the LGS. Our first five-color commander of the set, Garth One-Eye conjures up several iconic cards from Magic’s history. From Braingeyser to one of the most powerful cards of all time in Black Lotus Garth One-Eye fuels the nostalgia in the set. Now, you may be thinking “silly Matt, that’s planeswalker and this isn’t Oathbreaker,” and you’d be right. If you follow Sheldon Menery, face of the Commander Rules Committee you may have seen this tweet.

Yes, Grist can be your commander. For you rules wonks, please wait for rules update to explain exactly why.

Since Grist, the Hungry Tide exists as a 1/1 insect creature while not on the battlefield we can expect to see a full length explanation on Sheldon gracing Grist with the ability to be a commander. Many players seem to be ready to sleeve this one up as well since planeswalkers in the command zone are a rarity. Another fan favorite creature type returns with a legendary dinosaur with a new trample built in. Being able to push damage over planeswalkers and into the owners with a built in cost reduction doesn’t bode well for people hoping to hide behind only a few prison effects.

There’s plenty more previews to come from Modern Horizons 2, and we’ll be tracking the best of the best here for Commander and beyond!