Image from Spirited Away © Studio Ghibli

Welcome to Alter of the Brewed, the article series where we build the most thematic Commander decks known to humanity. This week we'll be taking Aminatou, the Fateshifter through the otherworldly tunnel of the Studio Ghibli classic: Spirited Away. Get your bath tokens and your creepiest masked friend, because this spirit train is leaving the station!

In this article series, we attempt to recreate worlds, subjects, characters, and more that exist outside the scope of Magic: the Gathering within its existing card base and rule set, so while that may mean strict adherence to a theme (such as Spirit tribal, which we'll see today), it often will mean more than that.

Can playing a game of Commander feel like watching Spirited Away? Can my game actions and shared experience with my friends remind me of something completely other? And most importantly, can we have this kind of experience and still create a game of Commander that is fun? As we journey through these other worlds together, we'll certainly be making as many parallels as we can to universes beyond Magic: the Gathering, but an equally important piece of making these decks enjoyable to play is that they actually function, that you're actually able to create this thematic experience before the game has ended.

With this shared philosophy in mind, let's build Aminatou: Spirited Away!

Spirited Away We Go

Some days we may need to stretch to make analogies between characters, but Aminatou and Chihiro, two strong young girls with an affinity for the spirit realm, are about as clearly parallel as we could hope. So we begin our deckbuilding here: 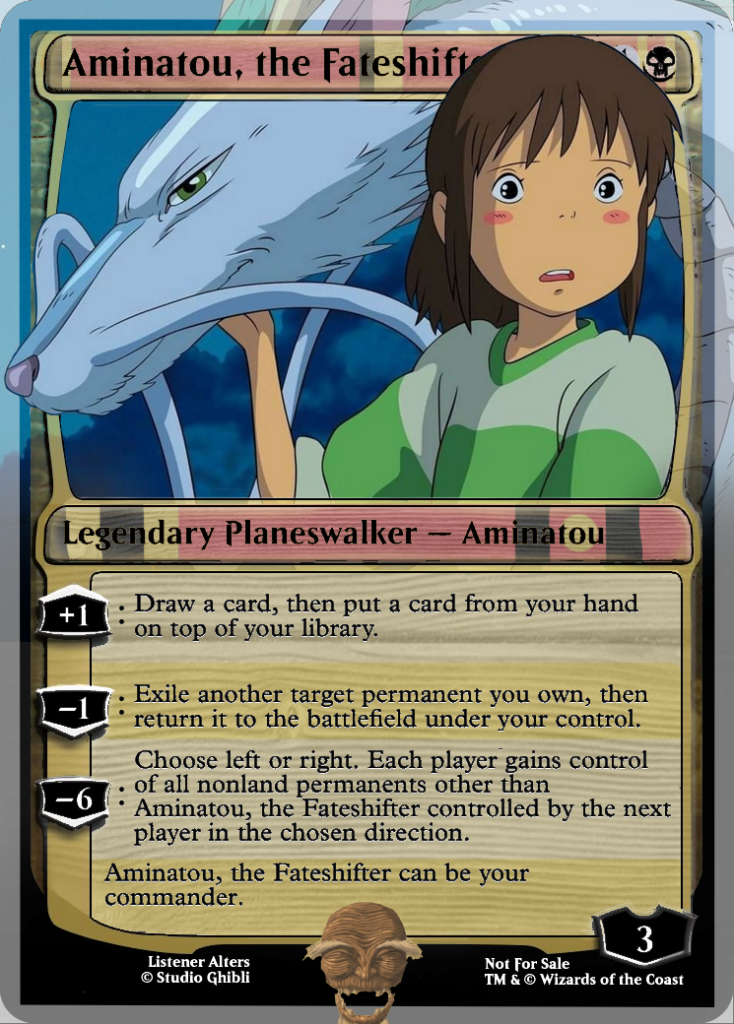 This starting place gives us guidelines for building the rest of our deck. We know we're in white-blue-black, and I can't imagine a deck attempting to recreate Spirited Away not being Spirit tribal. That's perfect, because we'll find plenty of strong synergies for the tribe in Esper colors. However, if we really want our deck to function, we need to see if there's overlap between Spirit tribal and Aminatou's abilities. This leaves us with four primary goals of our deck.

In priority order, this deck should:

The first step in making a deck feel like another world is to have very clear analogies to the most central characters, events, and themes. Here are some analogies I thought hit the nail on the head the hardest while still having some minimum synergy with our other deck goals, but if you're going to recreate this deck and have better ideas, please let me hear them in the comments! 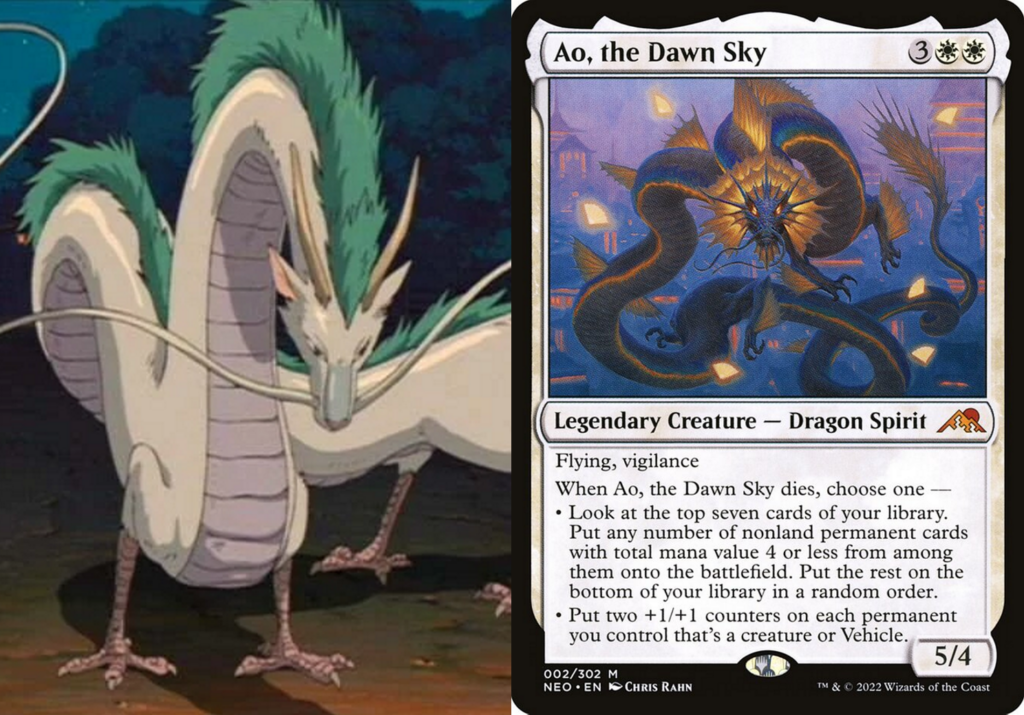 No-Face | He Who Hungers 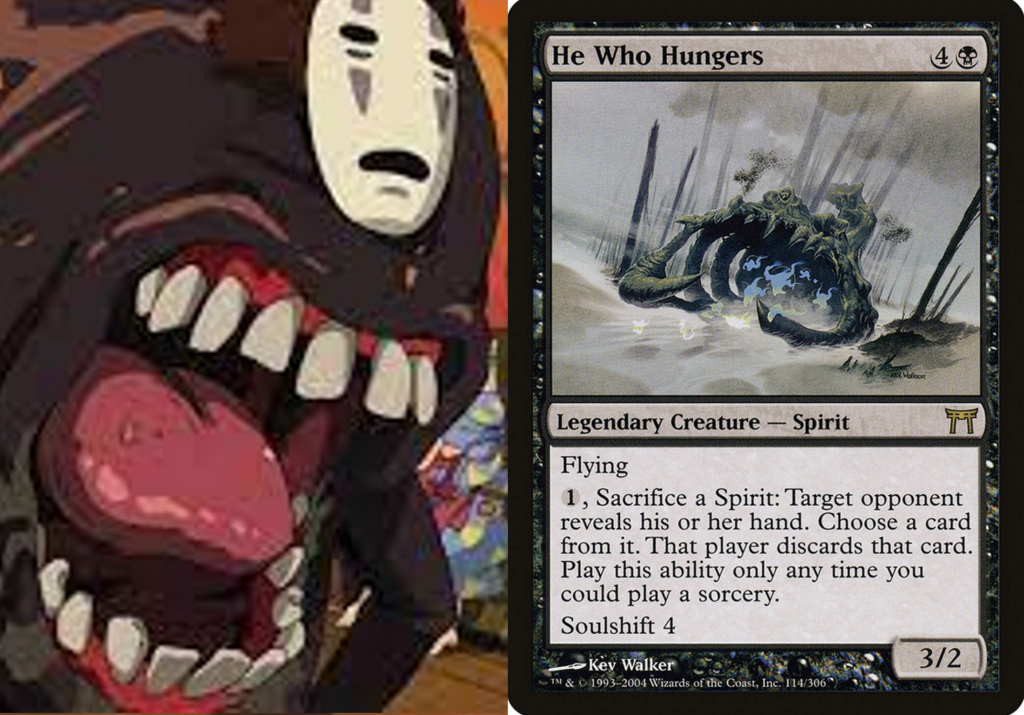 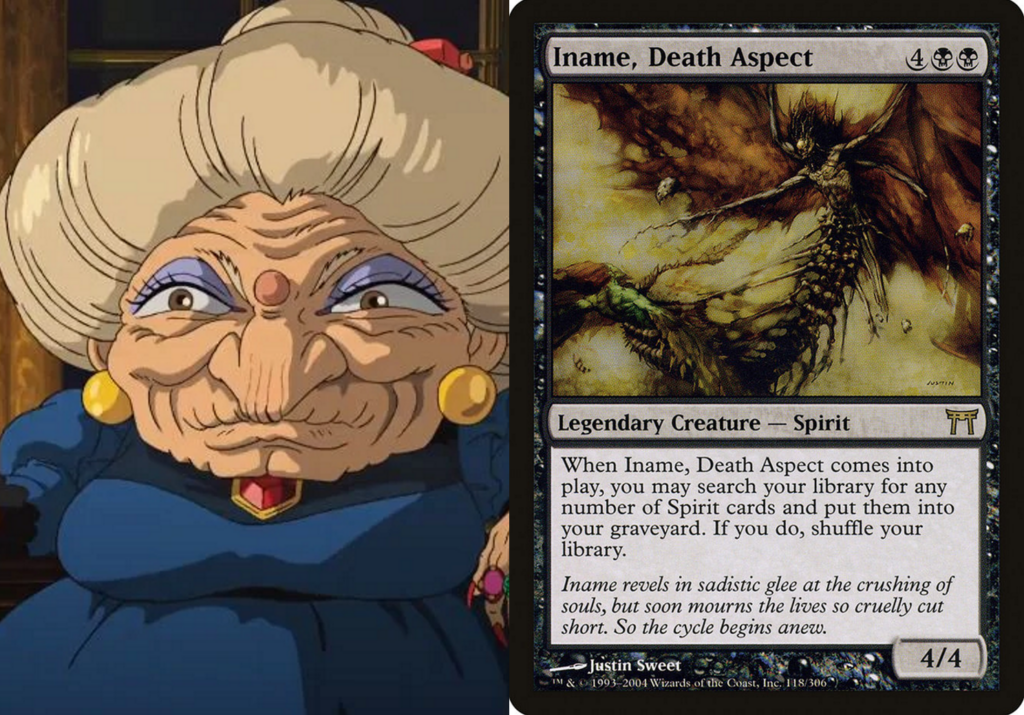 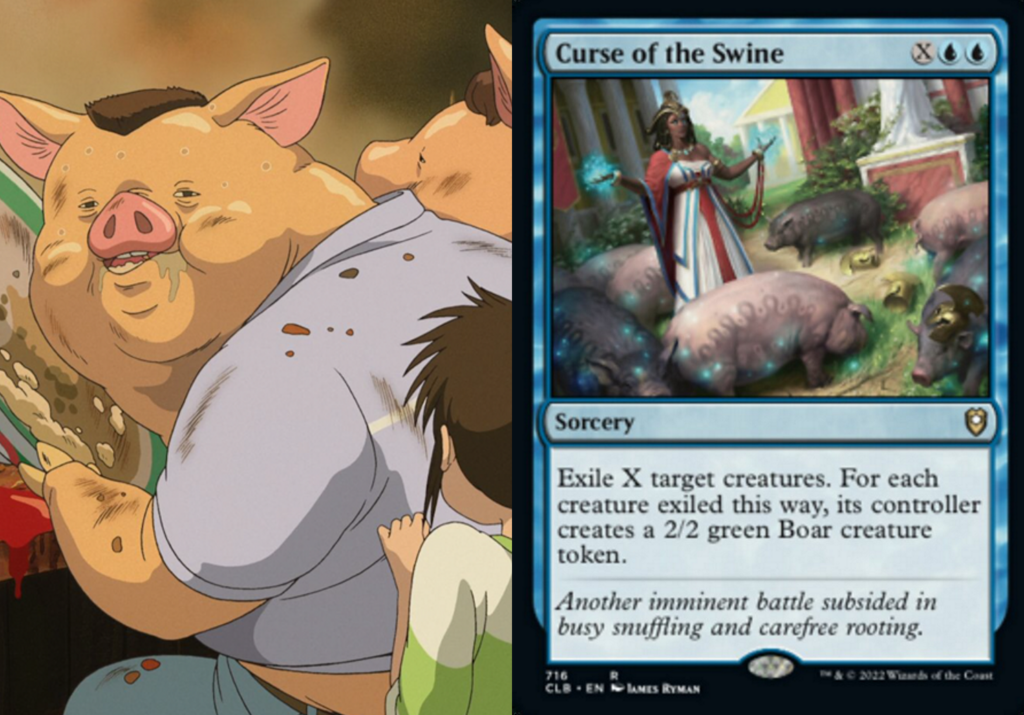 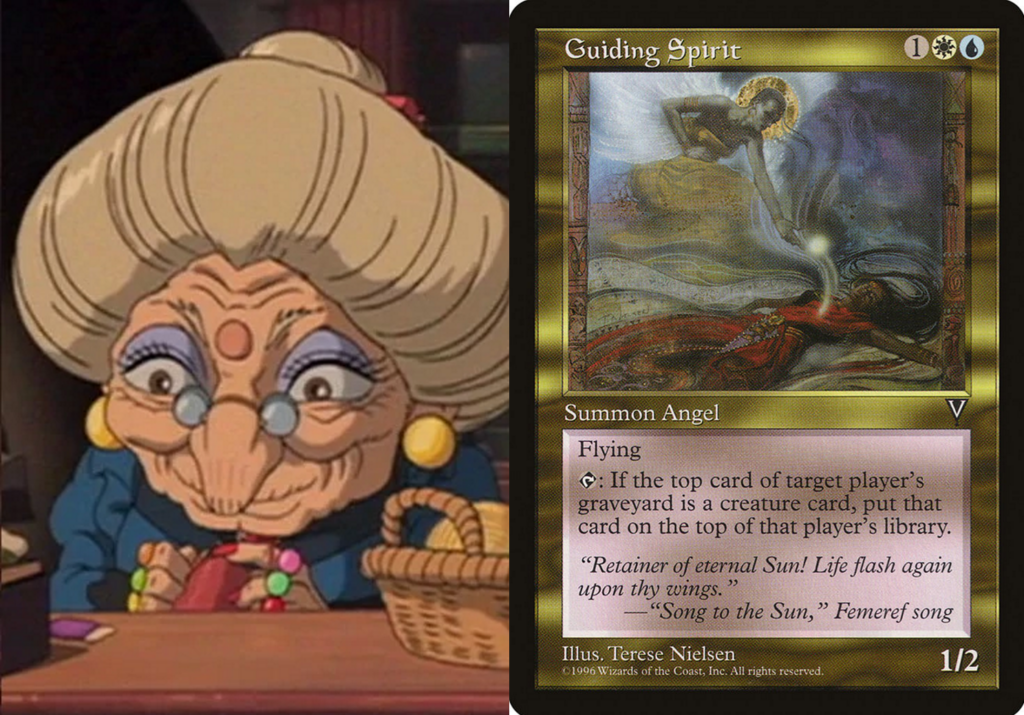 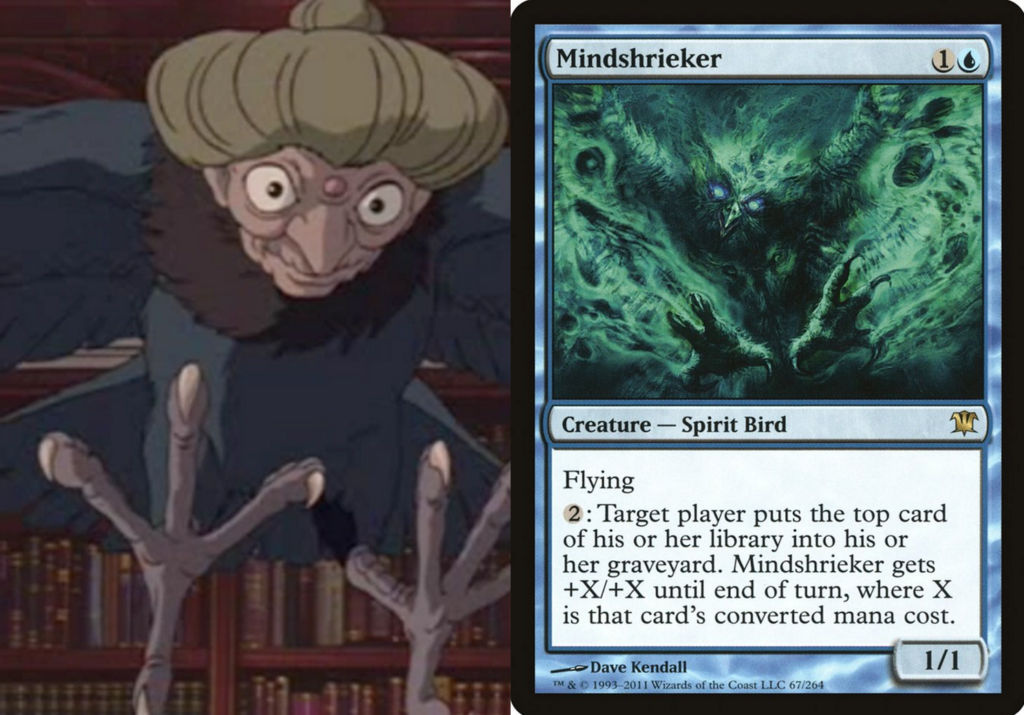 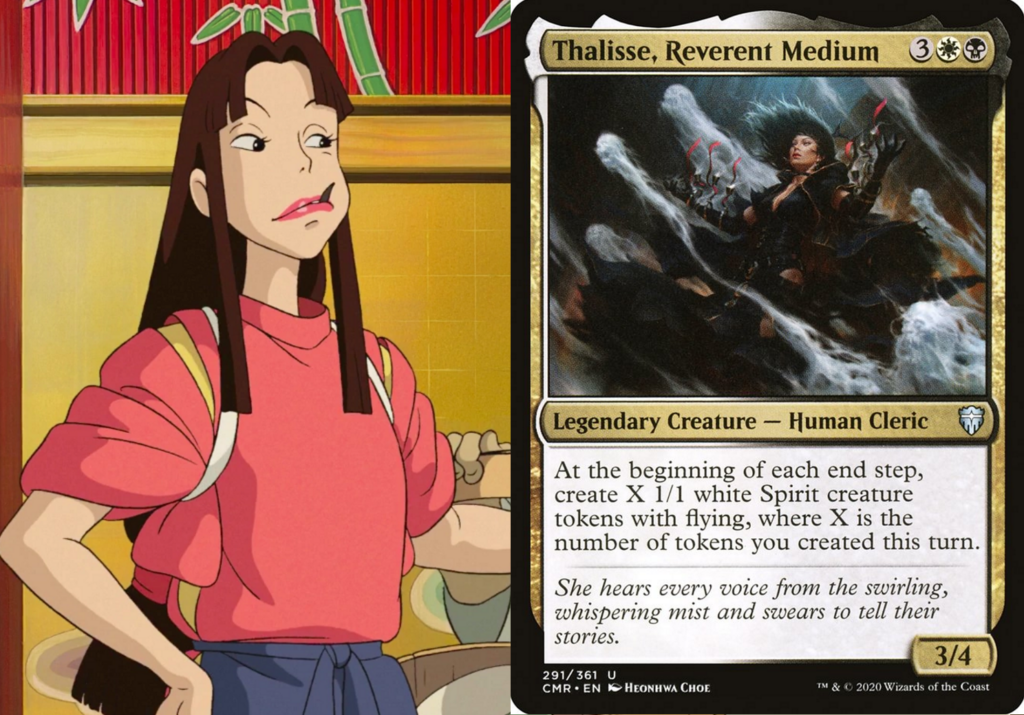 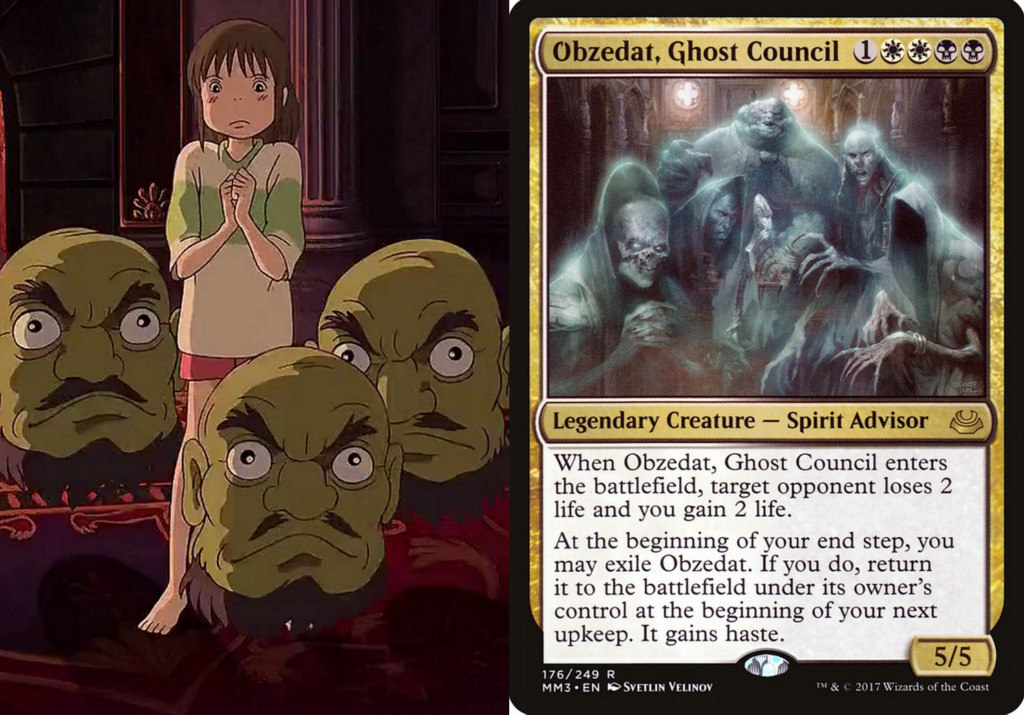 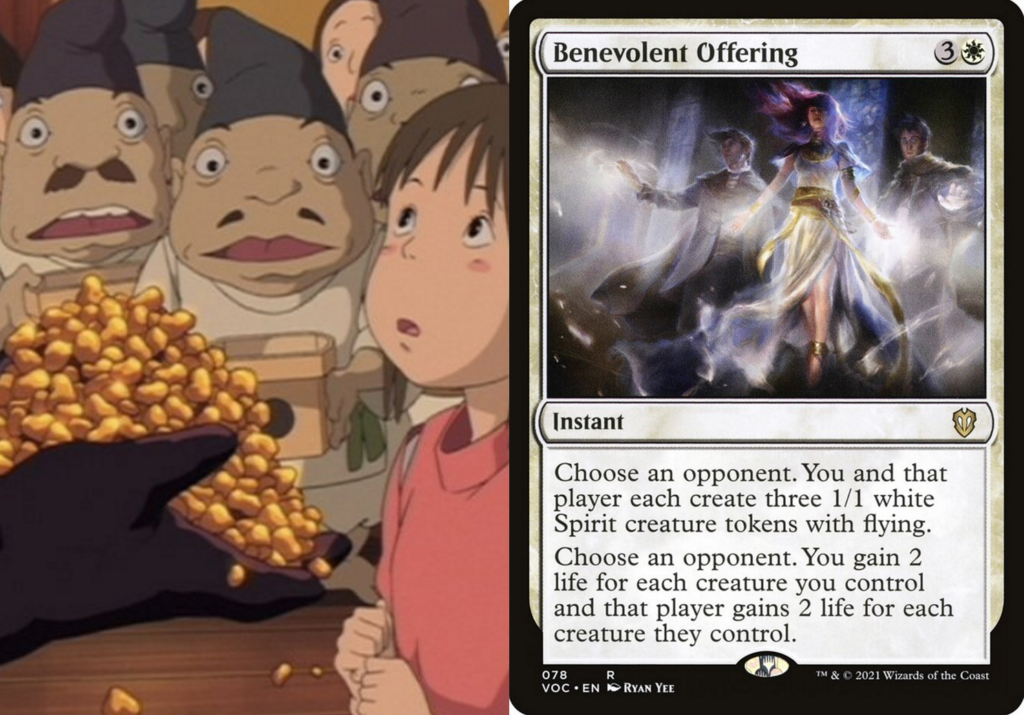 Next, let's tackle deck synergy. Most Spirit tribal synergy falls within white and blue, so those pieces are easy enough to find by doing a Scryfall search for commander:uwb o:spirit. This will show us everything that is available to us in Aminatou's color identity that references spirits in its text in some way. Some are pretty straightforward, but black also gives us some lesser-played cards that will give our deck even more character.

The next layer of overlapping Spirit tribal synergy with Aminatou is to find cards that are Spirits (or care about Spirits) that like us to blink them. It turns out there really is no shortage of Spirits with enters-the-battlefield effects.

We'll also likely need some alternative blink effects for when Aminatou is not on the battlefield.

But now we get to real spice. Many Aminatou players will tell you how strange her +1 ability is: Draw a card, then put a card from your hand on top of your library. It doesn't get you ahead on cards, and whatever you put back, you're just locking yourself into drawing next, so you can't even ditch a card you don't want! So what do we do?

Here's where the real synergy comes in. First, there're actually a handful of Spirits that care about what's on top of your library.

But in addition to this, there are Spirits that are happy to mill you, or are willing to reanimate something from your graveyard, either directly or with their own Disturb ability. This means that we can happily put that extra land on top knowing we're going to be milling it, or because we have a Spirit that will let us shuffle it away, or we can intentionally mill a creature into the graveyard to reanimate later!

Having tackled all of our goals for this deck, we add in some necessary pieces of ramp, removal, card draw, and lands (make sure you're using your Kamigawa lands for maximum aesthetic pleasure), and here's how my list has landed: Have I missed anything? Are there some clear creative analogies I've missed between Magic and Spirited Away? What changes would you be making to my list? Flood the comments like a thousand flying paper birds and tell me all about your adventures into the spirit world.