Alesha, Who Smiles at Death by Anastasia Ovchinnikova

Hello everyone and welcome back to Sphinx's Tutelage! First of all, let me say a huge thank you to all of you for enjoying the Obeka article. This series has been really cool to develop and I'm glad that you all want to take this ride with me.

This week's article is a bit different from my first article, but it's for a good reason! I've got three awesome Time Spiral Remastered previews to show you! Huge thanks to Wizards for choosing me to share these free previews with you all. I'm really excited for Time Spiral Remastered because the original Time Spiral block was when I got back into Magic after an extended break, and I hope that this remix of these sets will make some folks fall in love with the game again as much as they did for me in 2006/2007.

Let's not beat around the bush, though, and get right to the topic of today's article.

Alesha, Who Smiles at Death 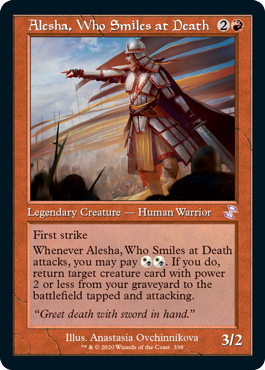 Wow. She looks so good in that old frame, doesn't she?

Alesha, Who Smiles at Death is an amazing card and an awesome commander. She heads up my current favorite Commander deck and is one of my favorite cards of all time. As a trans woman, I feel a deep connection to Alesha as a character and the release of the story "The Truth of Names" six years ago meant so much to me and others in the trans community. Being able to see oneself reflected within the game is so important and I'm glad that Wizards is continuing to expand the scope of this reflection with the addition of characters like Niko Aris.

Alesha as a Commander

On the surface, Alesha is a relatively simple commander: You swing, she brings back something kind of weak, you get a bit of value. Ho hum. Nothing special for Commander, right? Wrong. Alesha is so much more than that. Because Alesha's ability cares about the power of the card you're bringing back, you can bring back a lot of things that punch above their weight just because they happen to have 2 or less power in the graveyard. Currently in my deck only Sewer Nemesis and Noosegraf Mob fit this category of creatures, but there are plenty of other big beaters in this category that Alesha can bring back, such as Ignition Team or Nighthowler.

The key to finding these sorts of big beaters for Alesha is to look for creatures that either enter with a bunch of +1/+1 counters, like Ignition Team, or that get +X/+X based on some characteristic, like Nighthowler. You want to be wary of creatures with */* in the power/toughness box, though, since these effects are constantly calculated and will have their value even in the graveyard, so Alesha can't bring back Mortivore unless there is at most one other creature in all graveyards at the time. The only exception to this is when that calculation requires a choice, such as on Sewer Nemesis. These choices are only made upon the creature entering the battlefield, so with a null choice, there's nothing for * to refer to and so * is 0 while it's in the graveyard.

As you can see from my decklist below, I run a lot of creatures in the deck, so what do the rest of them do? Lots of things. A lot of them are silver bullets that come in useful in only a few specific circumstances. That brings me to my second preview: 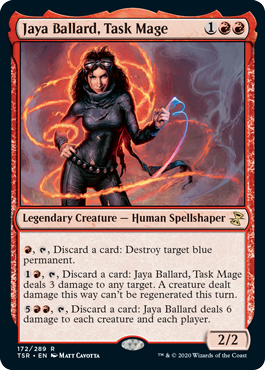 Jaya Ballard, Task Mage is almost the platonic ideal of a silver bullet for this deck. If I'm playing against any heavy blue deck, I want to see her and get her into play for her first Red Elemental Blast ability. Sometimes her third Inferno ability can clean up a clogged board, but more often than not I just want her for the anti-blue ability. Some of my other favorite silver bullet creatures in the deck include Skyclave Apparition and Necrotic Sliver to deal with problem permanents and Falthis, Shadowcat Familiar to help Alesha get through on attacks or become a super blocker with the vicious first strike and deathtouch combination.

In order to be able to have these silver bullets when I want them, the deck contains a lot of self-milling cards (e.g. Throne of Death, Mesmeric Orb) and looting/rummage effects (e.g. Seasoned Pyromancer, Gate to the Afterlife) to fill the graveyard with lots of juicy targets for Alesha to bring back. Alesha loses a lot of her impact without a well-stocked graveyard, after all. I personally choose to not run direct-to-graveyard tutors like Entomb or Buried Alive, but they're excellent options if you're building your own Alesha deck.

What I Don't Play in Alesha

Speaking of cards I'm not playing in the deck, there are a plethora of great creatures that work well with Alesha, such as the always scary Master of Cruelties and many, many others, which brings me to my final preview: 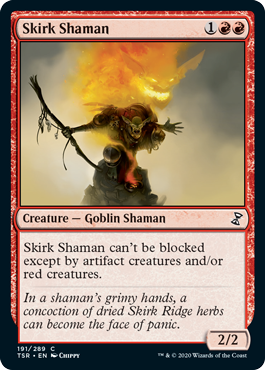 Skirk Shaman is a fine Limited card, but it's really not up to snuff for Commander where a creature has to be more than a reasonably-costed evasive body -- unless you're playing Edric, Spymaster of Trest.

As for more impactful cards I'm not playing, there are some really nice ones out there for Alesha, such as K'rrik, Son of Yawgmoth, which lets you pay life rather than mana to use Alesha's ability. I tried him, but he wants a higher density of black costs and was fighting for space with the artifact theme I try to keep going in my deck. If you want to try building in that direction, then Gray Merchant of Asphodel is another great choice. If you're going for a more straight-up two-power-matters build of Alesha, you can't go wrong with Subira, Tulzidi Caravanner and Militia Bugler.

There's another class of cards that I don't play in Alesha and I don't think you should either: Cards with attack triggers. While cards like Ankle Shanker and Coastline Marauders might look very tempting for an aggressive Alesha build, these cards do basically nothing when brought onto the battlefield with Alesha's trigger. When Alesha brings back a creature, it's attacking, yes, but it didn't attack. A trigger that says "When CARDNAME attacks" only triggers when that creature is declared as an attacker, but we've already declared attackers before the creature entered the battlefield and so that trigger won't happen this turn, so such cards would need to survive a trip around the table to get their full value, which makes them not great for Alesha.

It's important to note that "attacks and isn't blocked" triggers don't work the same way, however. These triggers will trigger when the creature is attacking and no blockers are assigned to it in the declare blockers step. They don't require the creature to have been declared as an attacker like the other triggers and so they're fully Alesha-compatible. This gives us more fun options for Alesha like Bone Dancer and Goblin Grenadiers. How my Deck Plays

We're getting on to the end of this week's article, but I'd like to walk you all through some of my favorite cards and lines of play in my Alesha deck before we wrap up.

My deck has an artifact theme, specifically in terms of accumulating treasure tokens, so I often close out the game by just machine-gunning down my opponents with Marionette Master and a pile of treasure tokens. All the better if she's equipped with Cranial Plating for extra oomph.

Shrieking Mogg is an innocuous-looking card that's been in my build since its inception, and it's been an all-star for the entire run. This dinky little Goblin turns into an utter powerhouse when it's brought in during combat to tap down all possible blockers for my already attacking creatures.

Valakut Exploration is everything this deck ever wanted in an impulse draw enchantment. Cards like Outpost Siege always left cards stranded in exile and out of Alesha's reach, but Valakut Awakening dumps cards I don't play back into my graveyard, where they belong. Firja, Judge of Valor has been doing a ton of work lately too, providing both card advantage and graveyard stocking all while having a solid two-power body. I've also been having a ton of fun with Tibalt, Cosmic Impostor. I would never think to run a 7-CMC planeswalker by itself in a deck like this, but when it's on the back of a solid two-power creature, it's so much more playable. Not only can Alesha get Valki, God of Lies back into play, I have plenty of ways to cast Tibs from the graveyard directly for late-game shenanigans.

In summary, Alesha is amazing and you really should try out an Alesha deck if you're looking for something fun and graveyard-y. There are so many ways to build her. I've seen about five different tribal versions, a life-gain version, a hatebears version, even just a Mardu/Tarki flavor build. She's a great, flexible commander and there are probably no two Alesha decks out there that are the same. I hope that this article has helped you to understand my love for Alesha and maybe made you love her a bit more too.

I'll be back again in two weeks with another rules-focused deep dive on a complicated commander. If you have any comments or suggestions, leave them below or contact me on twitter @JqlGirl. Take care all, and enjoy the rest of the awesome Time Spiral Remastered previews!