Welcome to Alter of the Brewed, the series where we build the most thematic decks known to man- and dog-kind. Hop in the Mystery Machine with me, because this week, we're joining Scooby-Doo and pals in their zany sleuthing adventures!

How Old Are These Scooby Snacks?

Perhaps a little dated, Scooby-Do, Where Are You! is an animated series that's been kicking for over 50 years. The show revolves around a ragtag team of unlikely heroes who find themselves uncovering the mysteries of far too many local criminals, always aided by their cowardly yet diligent pup, Scooby-Doo. If you couldn't tell by the title, the show revolves primarily around the dog and his best pal, Shaggy.

Months ago, it was pointed out to me that the loveable Magic: the Gathering duo of Pako & Haldan make for a great analog for Scooby and Shaggy, and thus, the seeds of today's article were planted: 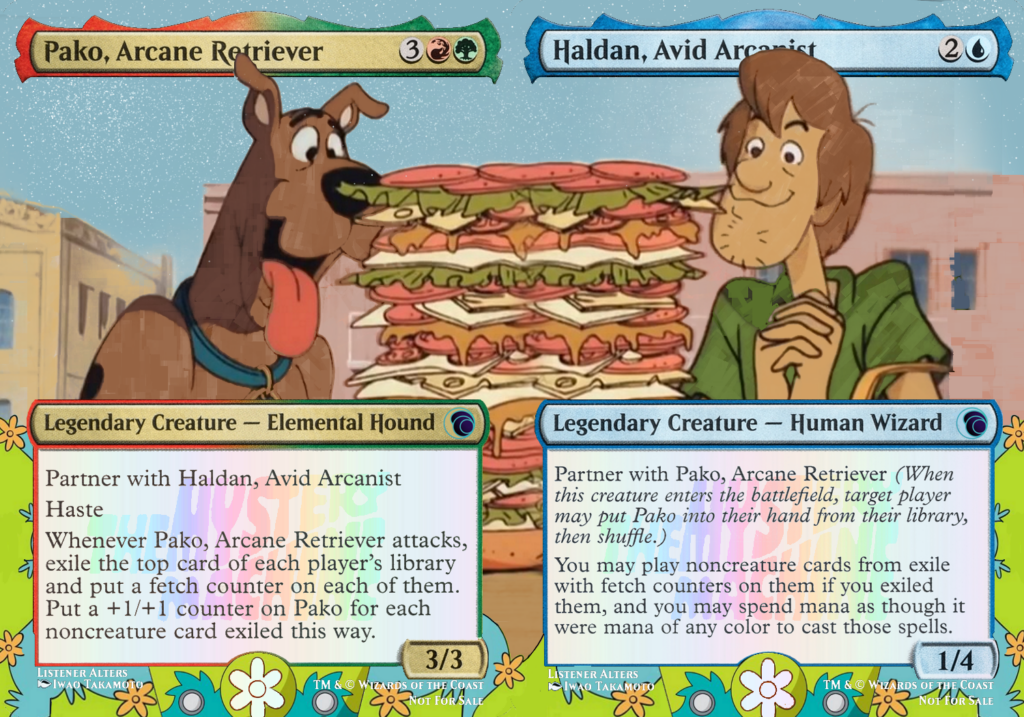 Now, Pako, Arcane Retriever and Haldan, Avid Arcanist don't explicitly have anything to do with investigating, but the wonderful thing about the Investigate mechanic is that it is essentially just free game objects and card draw, both of which many decks would be happy to make use, and we'll find the majority of cards that create Clue tokens are in green and blue. I think we'll see by the end of this article that Scooby and Shaggy are primed to lead a potent Investigate strategy that is deliciously flavorful.

Typical at this point in Alter of the Brewed, we hit a few direct analogies to other characters, objects, and events that resonate with our theme. There are much fewer of those today. The recurring Scooby-Doo cast is relatively small, and I found after building the deck that we were so committed to creating Clue tokens that many card inclusions beyond the necessities felt brutishly shoehorned in. Instead, this week we're really going to lean into creating a deck that feels like the plot of Scooby-Doo rather than have a large quantity of character tie-ins. If you build this deck yourself, though, feel free to throw in a Vehicle as your Mystery Machine or some great references to masks and disguises! 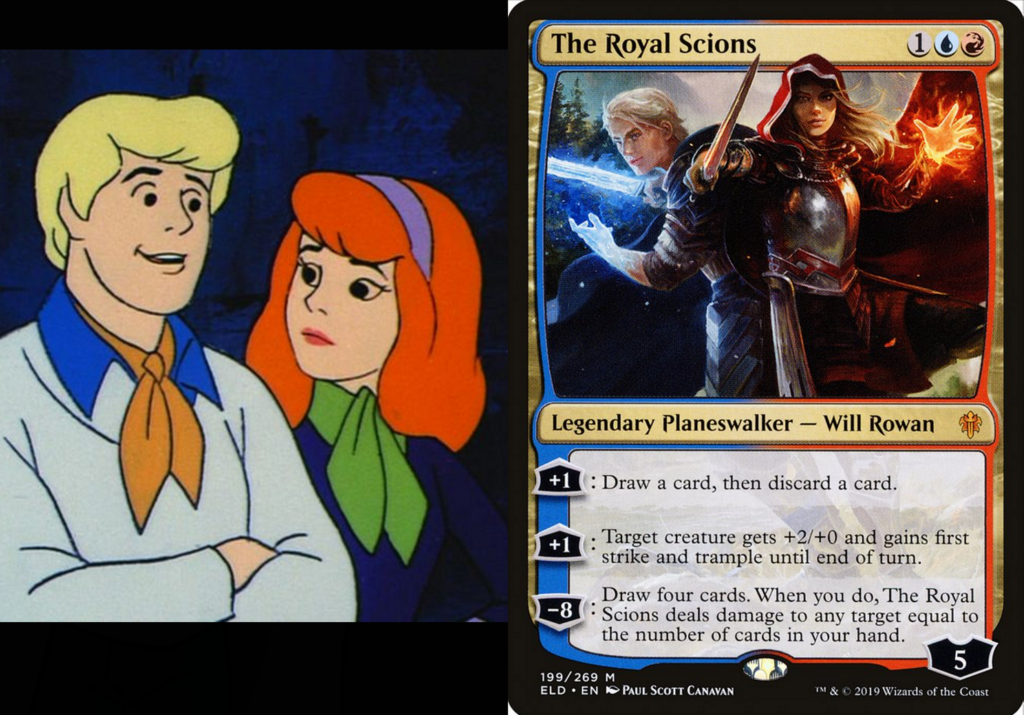 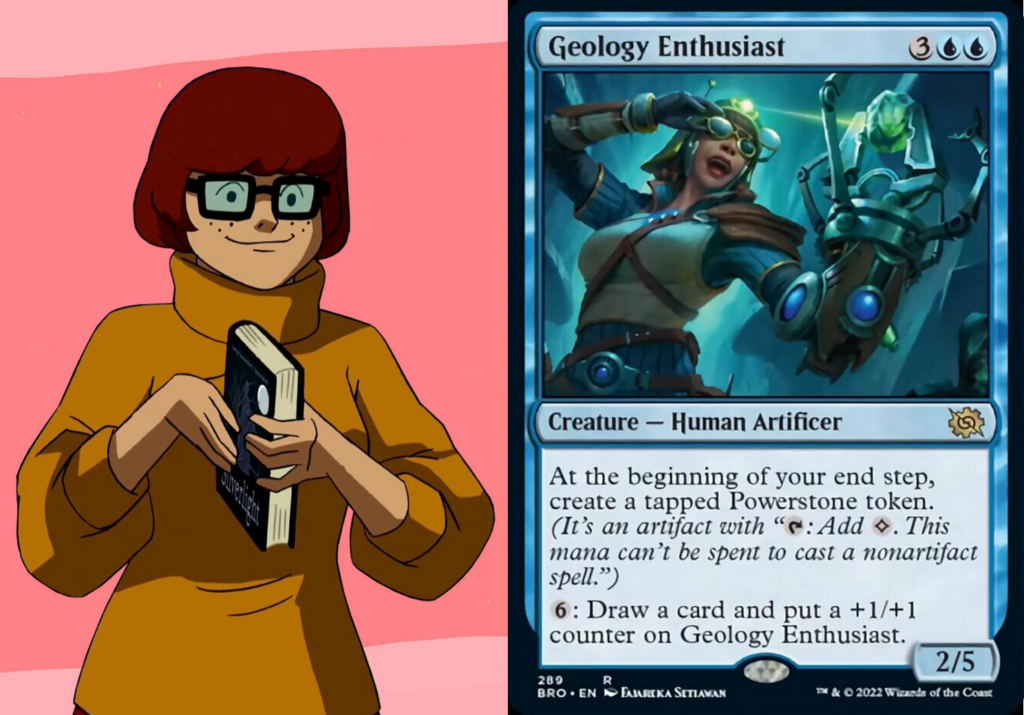 I decided that since our Scooby and Shaggy don't directly reference Clues, I wanted the same for Fred, Daphne, and Velma. The crew tends to find themselves stumbling upon mysteries rather than seeking them out, so I thought it would be more fitting that they all bring their strengths to an unexpected situation, instead of specifically having prepared for it.

Fred and Daphne team up to lead the charge through your deck or over your opponents creatures (which is an analogy we'll use for solving the mystery of your Commander pod), while Velma is apt at cracking Clues and acts as sort of a Clue, herself, once given enough resources.

When playing this deck, there are a few guidelines I would have in my head in order to both really feel the theme of solving a mystery, as well as piloting this deck successfully.

Think of digging through your opponents' decks with Pako, Arcane Retriever as solving a mystery (or three)

What are your opponents' decks like? What are they playing? What evil plot do they have to bring about everyone else's demise? Surely we need to figure out what that no-good Mairsil, the Pretender is up to.

As you connect with Pako over and over, you'll uncover the secrets your opponents have hidden in their decks, unmasking their plans and turning them on their heads. In fact, the greatest victory in all of Magic: the Gathering is finding a way to win using your opponents' cards, isn't it? Pako doesn't have innate evasion, so we'll want to make sure we get Scooby into the action and get the most out of our limited combat steps.

Clues are a means to an end, not your primary win condition

The way you're most likely to win with this deck is either by finding something really powerful as you dig through your opponents' decks or by wreaking havoc with a big, clumsy dog for commander damage. Don't be afraid to crack your Clues as often as you can, though, because they'll find you more ramp and evasion to facilitate the star of your show, Scooby-Doo. The deck has a lot of ways to produce ample mana for this very purpose.

It adds to the fun when you yell Jinkies! because you flipped over an Eldrazi from another player. There are several monstrosities included in this deck as well for that very purpose. Part of selling a good theme is playing the part with all of your heart. (Rhyme unintentional, but it makes the statement more true.)

There's a reason the adventures of Scooby-Doo have lasted decades on television screens. We never get tired of solving a good mystery, and essentially none of the episodes are tied to any real central plot with these characters. In the same way, I believe part of the appeal of commanders like Pako, Arcane Retriever and Haldan, Avid Arcanist is the eternal playability and never-ending unique experiences you find when playing a deck revolving around your opponents. The reality is that every game of Commander really is a new mystery to be solved, we really are finding ourselves in new unforeseen circumstances, and each new game really is a new puzzle to work out.

Embrace the mystery. This deck is not only perfect for the Scooby-Doo nostalgia lovers, but for anyone who values playing a deck that will meld itself to the people you find yourself across the table from. Thanks for joining me on this journey, and I hope you'll let me know in the comments how you would add your own Scooby Snack flavor to Pako & Haldan.

Now get out there and meddle, crazy kids.