Quite unlike Magic, the best color in chess is white. Why? Because white makes the first move. White is "on the play," so to speak. When white wins the game, it has taken more total moves than black.

Is this a problem for chess? I don't know enough about the game to comment.

Is it a problem in Magic? Yes. Or at least enough of a problem that in 1997, Fifth Edition came with what is now Rule 103.7a, which states "In a two-player game, the player who plays first skips the draw step (see rule 504, "Draw Step") of their first turn." Prior to this, player one had a strict advantage over player two, an advantage that has since been mitigated, but remains statistically observable.

Take it from bigger brains than mine. Reid Duke, Frank Karsten, and Florian Koch have written about player one's advantage at length, but none have put it so succinctly as hall of famer Paulo Vitor Damo Da Rosa, who writes "everyone understands that the default in Magic is to play... the great majority of the time you think you've found an exception, you're wrong." Knowing all this, one wonders why Commander doesn't even try to help out players who lost the dice roll.

But Jake, these four write with 1v1 formats in mind and make no mention of Commander in their analysis. Do their takes apply? Is going first that big of a deal in Commander?

Does Turn Order Matter In Commander?

Consider how much better a card can be when played earlier in turn order. A turn one Burgeoning is stronger if you went first than it is if you went fourth. Cards like Esper Sentinel, Rhystic Study and Thalia, Guardian of Thraben scale proportionately with turn order. Having taken less turns, the later players have less resources and chances to play their cards out free of impediment.

This is to say nothing of creatures. The sooner they land, the sooner they can swing. The fewer blockers your opponents have, the sooner you can beat face and get triggers. The calculus is simple, the advantage obvious.

Don't get me wrong, cards that incentivise going later in the order do exist. I've always felt Gemstone Caverns is criminally underplayed in Commander given that it's live 75% of the time. Part of white's identity revolves around being behind your opponents, with cards like Land Tax, Knight of the White Orchid, and Keeper of the Accord banking on this. This theme is one of my greatest frustrations with white design, but that's an article for another week. Either way the fact remains: likelihood of winning correlates with turn order.

Having said that, winning isn't everything. Plenty of players are drawn to Commander because it isn't a competitive format, so why should we care about changing anything in the first place?

Not Competitive Shouldn't Mean Not Balanced

Commander may not be competitive in the sense it isn't played for prizes, but it is still a competition. When we sit down for a game of Commander, we hope we're all on a level playing field. True level may not be possible, but a healthy playgroup tries to balance things as much as possible. This is the very crux of rule zero and the pre-game discussion. Winning might be secondary to having fun, but speaking personally, I have more fun when it feels like every player has an equal chance at victory.

I'll freely admit I spend more time playing at high-power tables than I do casual tables. This skews my take on things, but even Commander's greatest advocate for casual play has noted it as a problem. CAG member Shivam Bhatt of Casual Magic believes "player advantage is something we need to actively be working on."

Truth be told, short of totally upending Magic's rules, nothing can completely negate this problem. It is just the nature of the game. But that isn't to say we should give up on looking for solutions that can mitigate it.

Shivam's preferred solution was once the introduction of Monarch as an inherent part of each game. The Monarch token would be handed to player four at the beginning of their turn, thereby giving them an extra draw and preventing other players from stealing it with a hasty creature. While I like this in theory, it comes with a lot of baggage. Incentivising creature combat and encouraging aggressive decks is something I'm passionate about, but Monarch strikes me as a better solution to the aggro problem than it does the turn advantage problem. If nothing else, it's only a solution for player four. 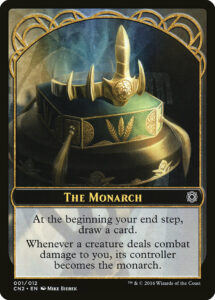 Would additional draws work? Two problems here. For one, any player that draws more than one card on their first turn will need a playable ≤1CMC card in hand or they'll be forced to discard at the end of turn. This is either useless or abusable for decks that are looking to bin specific cards. It also lacks granularity to scale properly. You can't draw a half or a third of a card.

What about robbing player one of their draw like traditional Magic does? A little more merit here, but it still has scaling problems. Hurting player one makes player two the preferred position. It's also most likely to spark controversy because most people prefer to be given things than have them taken away, as recent bans and unbans should illustrate.

While a two-player game only needs a boon for the second player - the draw in 1v1 Magic, the coin in Hearthstone - a multiplayer game needs a system that scales in proportion to the amount of players. Introducing a benefit for the fourth player is fine, but without one for the third player, all of a sudden it will feel better to go fourth than third. This only shifts the problem downstream.

What Commander needs is a system with enough nuance to provide player two, three and four with a leg up in proportion to their disadvantage. Something strong enough to have an impact, but subtle enough that it doesn't completely warp the opening turns. Enter the smoothest mechanic Aaron Forsythe ever designed: scry.

Consider each player being able to scry X after they finish mulliganing, where X is equal to a player's seating position minus one. Player one gains nothing, they continue with their regular draw. Player two sees a single card that they can bottom or draw. Player three sees two, and poor old player four sees three.

Scry would add a little opening consistency, without so much selection as to enable broken strategies. It's also easy to tweak. If it proves too strong, that scry can take place at the end of your first turn rather than post-mulligan. If it proves too weak, the amount of scry can be increased or the scry can happen at the beginning of turn, once you've seen what other players are doing. If scry three is too good for player four, it can be adjusted to a Halimar Depths style effect. The precise numbers will no doubt require some fine tuning, but I feel this is where the answer lies.

And I'm not alone! Or at least, if any change was to be made, this is the one that Sheldon Menery prefers, stating "there has to be a scaling solution by seat after the first, which is why I like Scry (Seat Number)-1." This might make a change sound likely, but I got in contact with the RC and the CAG and this is what they told me.

What The Powers That Be Think

Sheldon tells me that "It's one of those things that's interesting academically, but about the limit of it at the moment. There's a cost associated with making a rule change and the payoff doesn't seem worth it right now." Okay, so not a lot of support there, but I wouldn't call it a hard no.

Charlotte Sable of the CAG feels about the same, telling me "I don't see an obvious alternative to the current status quo and I'm worried that any system that does mitigate early player advantage effectively would add too much rules weight to the format." Not much support here either, but an acknowledgement of early player advantage is a good sign.

Both Sheldon and Charlotte say cognitive load is an issue, but I feel like changes to mulliganing rules are far and away the easiest to remember and learn. The Vancouver and London mulligan are fairly recent changes that smooth out opening balance, and in my experience players are quick to adopt rules that mitigate the feeling of being on the backfoot. As I see it, cognitive load is an issue when things need to be kept track of, something a scaling scry does not.

What about Shivam? Shivam is the most receptive to a change, but has softened since joining the CAG. He tells me "I genuinely believe that the 4th player problem in EDH is a challenge worth looking into. I think progressive scrying is an idea worth testing but in the years since joining the CAG, I've come to the conclusion that the player 4 problem is not as big of a problem as I once thought. If you're playing hyper-optimized EDH ending on turn 4, it makes a huge difference, but if you're living for turns 8-12, first or last doesn't really matter as much."

I agree with Shivam that the problem is more pronounced the higher power your pod is, but I still see merit in a change that doesn't take anything away from players. You're not robbing Peter to pay Pauline. A "competitive" playgroup will get a more balanced gameplay experience, while a weaker one may barely notice the difference. That sounds like a win-win situation to me!

But much more important than what the RC and the CAG think, and infinitely more important than what I think, is what YOU think. This is your format. Have you noticed turn order impacting winrate? Have you ever tried introducing a system to balance it all out? If this is the first you're hearing of the scaling scry, I implore you to give it a shot. It feels fantastic! If you've already been using it, or something like it, I'd love to hear from you. Reach out to me on Twitter at @Jake_FitzSimons

Special thanks to Sheldon Menery and Shivam Bhatt for their thoughts, and particularly Charlotte Sable and Goldshot20 for their input and assistance.

Jake FitzSimons is a writer from Sydney and a Magic fiend. He's either the johnniest spike or the spikiest johnny, nobody is sure which. When he isn’t brewing or playing cEDH, he can be found writing, playing piano, and doting on his little cat.

Stop Evaluating Cards in a Vacuum