Hey folks, I'm Chris and I'm YOUR Commander Mechanic. You may recognize me from my YouTube Channel or from guesting on major streams around the community--I'm a deckbuilder and brewer with a very analytical view of the format of Commander.

Some have said I take a competitive mindset and apply it to casual Commander, but I prefer to think of it as taking an efficient look at deckbuilding. More of the game is played before you ever sit down at a table with other players.

Throughout this series I want to take a look at how you can improve play experience--your own and that of others--before you ever play a game. Avoid not being able to play the game due to deckbuilding issues, avoid imposing poor scenarios on others, and ensure you have concentrated efforts in mind when deckbuilding.

But, as always, Commander is about having fun YOUR WAY--don't let anyone tell you there's a right or wrong way to play this game.

Self Expression Through Deckbuilding

Commander is a format where you can use almost Magic's entire history of cards to build and do whatever you want. Taking the framework of Magic and the rule set of Commander and imposing on it personalization is exactly why this format means so much to so many people. You aren't playing 'a' deck, you're playing 'your' deck, with everything that means to you, every ounce of heart and soul you poured into the choices, and everything those cards mean to you or represent.

'Optimal choices' or 'better' cards are something people talk about often when looking at the decklists of others, but that's viewing the deck as an outsider and often providing unwanted advice or feedback on someone else's entirely subjective choices. It's one of the reasons I only provide deck feedback when players approach me for feedback: I would never DARE assume what someone else has in mind when it came to crafting their baby or how they choose to enjoy this game.

And while it would be great to wax poetically about this, I'd rather choose a different option.

Let Me Show You My Pokemon

That's where expression of one's other interests overlap with Magic and Commander and creates something beautiful. It's choosing abstract representations and superimposing over them. This is seen in theme decks built around a band's lyrics or based on a movie and the characters within. We're about to get a Lord of the Rings crossover, but many people have built decks themed after the Trilogy of films. Star Wars as well, and countless video games.

And recently I've take a stab at this myself. It's outside of my usual mechanically focused deckbuilding but... I love Pokemon. Always have. So I wanted to bring that into Magic.

With the help of alterist @AlphaOmegaAlts, I picked up an alter of Obosh, the Preypiercer--a Companion, a mechanic I love--altered to look like my favorite Pokemon, Nidoking. 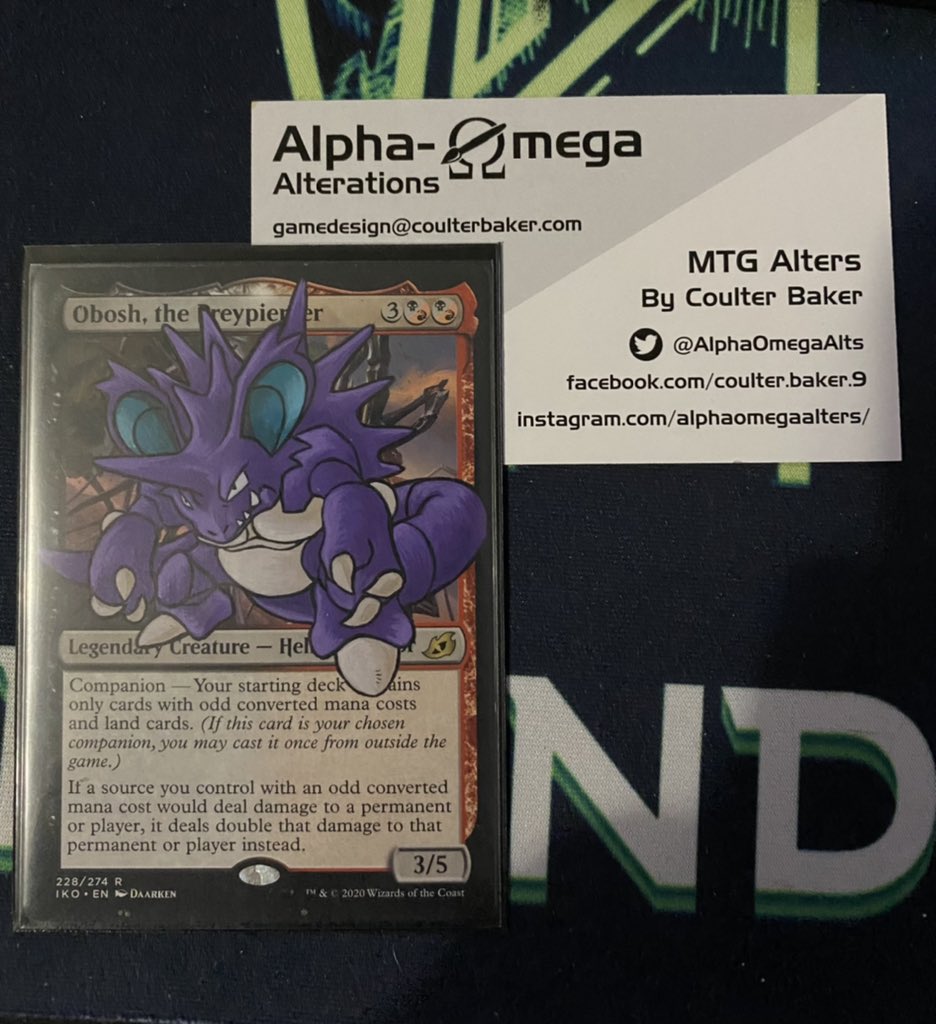 And this got my mind reeling, naturally. How do I use this amazing piece of art and, well, show people my Pokemon. This had me think back to an old brew for Florian, Voldaren Scion from last year that used Obosh as a Companion. Like a Pokemon Trainer uses a companion Pokemon... hey, that's a cool concept. What if Florian, a Pokemon Trainer, summons his partner Pokemon Obosh? What if we summon a BUNCH of Pokemon?

Again, this got me thinking: how can I summon Pokemon like a Pokemon trainer? And can I go beyond just Nidoking, my favorite Pokemon, and summon my favorite team of Pokemon? A total of 6 unique alters on cards that represent some of my favorite non-Magic game characters?

All within the confines of Magic and Commander rules, cards, and deckbuilding. I was in love.

And I ended up settling on a potential pivot build for that old Florian/Obosh deck... in Dragon's Approach.

The restriction of odd-mana-value-only cards, the mini-game of trying to do something that doesn't necessarily win the game, AND showing off my love for a non-Magic property INSIDE of Magic? I'm all over this! I can excitedly show off a lot of things that mean a lot to me all at once (Magic, Commander, deckbuilding, Pokemon) and have fun doing it!

I built a deck--which you can see later in this article--but naturally I couldn't just have Obosh as the only Pokemon if I was going to summon Dragons and shout "I CHOOSE YOU!" when I popped off a Dragon's Approach. So I contacted AlphaOmegaAlts to get some more alters done. The easiest was Florian--if he's going to be a Pokemon Trainer, he should look like one. But what about the rest of the team? I had 5 slots for my favorites and I'm going to use them!

Obosh, the Preypiercer as Nidoking

Gray Merchant of Asphodel as Salazzle

Yes, I'm a poison trainer, if you couldn't tell, but these are my favorites, and many have followed me around from game to game for GENERATIONS, so being able to play them in Magic in a concept deck that 'does the thing' AND gets to do funny things like summon Pokemon and allow me to shout 'I CHOOSE YOU!" is a form of expression that's liberating and FUN.

So I took a personal stance: I'm going to enjoy playing Magic whether I'm winning or losing. My goal is to enjoy the game and do something for ME, no matter what, and this is the latest in exploring that for me, where I can play Magic and Commander but also enjoy everything I'm doing and everything everyone else is doing, tell a story or do something cool, and walk away from it with other people talking about it no matter what happened. It's not about winning or losing, it's about creating stories and what you leave behind with each other rather than what you enter the pod with.

Here's what I want to leave people with: a good time and a story about a crazy person trying to play Pokemon in Magic. As you can see from some of the choices in the deck, I'm not playing to go all-out here; the goal isn't to mercilessly crush opponents. The deck can win, for sure, thanks to Thrumming Stone and the copious amounts of burn, but the goal is to summon my Pokemon team and show off the cool art I've commissioned. Do something that gets people talking or leaves an impression. Give them a piece of 'me' and my own personal expression to take with them.

That's why I love this format!

I Want to Be the Very Best

If there's one thing you should take away from this, it's that the personal expression part of Commander is what leaves the best impressions. You talk about someone's cool deck or concept or the wacky thing they did in a game more than most stories about wins or loses. Showing someone the limitless possibilities of how they can make this game THEIRS is what gets people brewing or imagining what they want to do with the blank canvas of 100 cards.

I want you to show me your Pokemon, figuratively. What personal decks have you brewed to show off the cool things you love? What from OUTSIDE the game of Magic have you brought INSIDE, and how have people reacted to it? Let me know in the comments below!

And, as always folks, good luck & have fun!