Welcome to Alter of the Brewed, the article series where we build the most thematic Commander decks on... Summoner's Rift? That's right, this week we emulate an entirely different game within our game as we attempt to build a deck that plays out like a game of League of Legends.

Years ago, when Tahngarth, First Mate was released with Commander 2019, I created one of my first ever digital alters. The card will always hold a special place in my heart, because it helped set me on the path that would one day bring me to writing this very article series, and I played and loved the deck for years. Tahngarth operates within the rules of Magic: the Gathering so uniquely that I was constantly finding new ways to leverage their abilities, and it was immediately clear to me that the card acted and looked uncannily like Alistar from League of Legends. 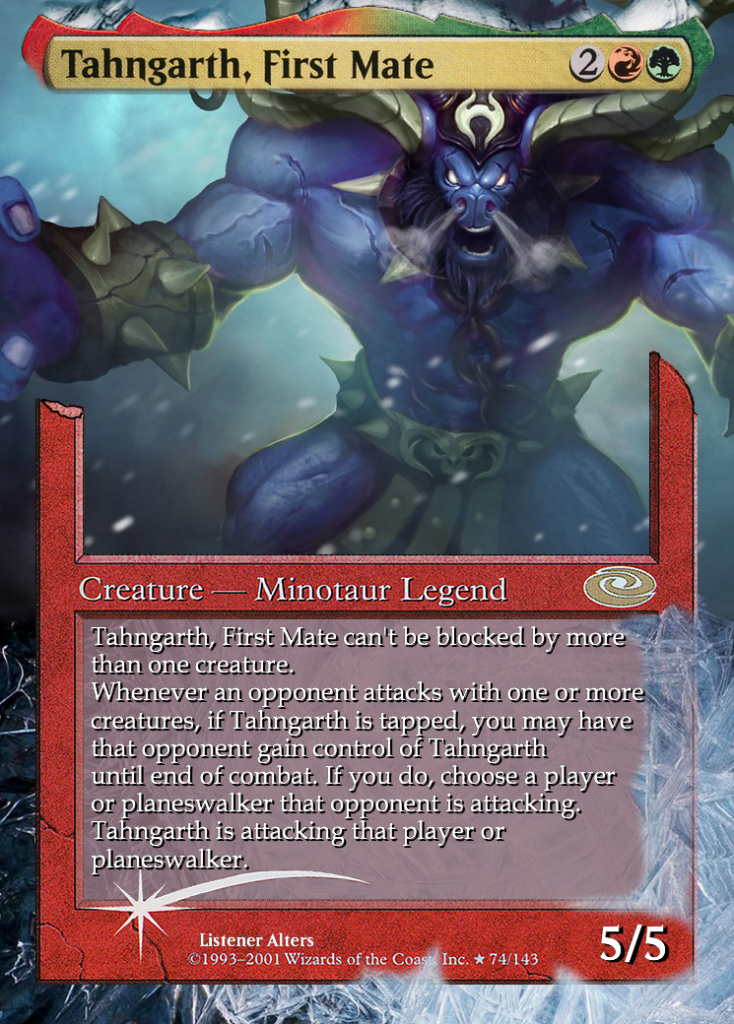 If you're unfamiliar, League of Legends is an online MOBA-style game where players team up as three or five champions to face off against another team of three or five. Your team claims victory if they can take down the "nexus" in the opposing team's base, but to get there, you'll have to fight through waves of minions, neutral monsters, defensive towers, and most importantly, your opponents.

And not unlike a party in an RPG-style game, or even positions in games like football, in LoL, players typically each take on one of five roles which dictate how and where on the map they play the game. Most important to us today is the "Support" role, where your job is largely to help insure one of your team's biggest damage dealers stays alive and can carry the team to victory.

What's so clever about Tahngarth, First Mate as a Magic card is that it acts as an aid - a support - to your opponents, when Commander is not actually a team-based game like League of Legends. How could this possibly be a good thing? We'll cover that soon, but first, let's dig into how playing this deck will feel like playing a game of League.

Playing the support role to your opponents in a game of Commander can look many different ways. In fact, there are a lot of players who enjoy playing "group hug"-style decks that use their resources actively helping their opponents, sometimes to politic their way into a win, and sometimes just for the laughs with friends. In today's case, we'll hit a few categories of these cards while still developing a viable strategy of our own.

First, I felt like I couldn't emulate a Support Alistar without including at least some cards with the Support mechanic.

What I love about Generous Patron in particular is that putting counters on your own Tahngarth, First Mate while it is under the control of an opponent will draw you cards.

Another way we can "support" our opponents is by putting Auras onto their creatures. We have some ways to prevent that from backfiring in our strategy section, but there are also some Auras that benefit us no matter whose creatures they're attached to.

Just this year, we saw the printing of Background cards that give interesting abilities to your commander. What's particularly fun about Backgrounds with Tahngarth is that they apply to all commanders you "own", meaning they will continue to apply their effects to Tahngarth even while your opponents control him. This means your opponents can have access to some very potent benefits if they're willing to swing at other players and receive your cow's aid.

Another major component of League of Legends is the large neutral monsters that give huge buffs to your team if you can manage to defeat them without your opponents stopping you, or worse, stealing the final blow at the perfect moment. I really wanted to make sure that Baron and Dragon buffs were represented in this deck, and I think I found some very resonate analogies. Particularly Grothama, All-Devouring, who you'll want to make sure you play out when you're sure you can kill it and hope no one disrupts your attempt to draw a ton of cards themselves instead.

Now, helping your opponents might seem like good fun and all, but how does it actually translate into, you know, winning?

First, like with many decks, we'll want to get our engines online early so we keep hitting our land drops and drawing cards. I've made sure a decent amount of the ramp in this deck is on enchantments, since we're already incentivized to run enchantress effects with all the Auras we're playing. You may even cut some of the artifact ramp for more options like these, since they're potentially capable of ramping and drawing cards.

Next, we'll want to start beefing up some of our opponents' creatures. Choose creatures your opponents will already want to protect, like their commanders, and my recommendation is to focus on one or two per player rather than spreading out the love across the whole board. If you've got a couple of Auras on an opponent's commander and you save that creature from removal at some point, you've protected your investment and potentially earned yourself some favor from another player. It'll also create a potential game-ending play if you borrow that creature in the late game.

Now, I'm no fool, and neither are most Magic players. They might not always be so keen to attack in with their creature enchanted with One with Nature to ramp you, or always be eager to get your Tahngarth, First Mate into the fray, so you will undoubtedly have to make it very enticing for them to attack, or you may have to resort to... goading them into that team fight.

There inevitably comes a time in the life of a League of Legends player where you are behind, the opponents are putting pressure on you, they're stronger than you, and you just need to keep them from ending the game. One thing I discovered from playing with Tahngarth, First Mate for years is how he has an incredible yet inconspicuous synergy with Glacial Chasm.

Here's how this works: typically Glacial Chasm prevents your creatures from attacking, so it isn't great in a strategy that wants to get in with a giant Minotaur commander. However, because Tahngarth passes itself to your opponents' control, even though you can't attack, they still can. So as long as you have a way to tap down your Tahngarth to trigger its ability, you can still get in the fight on opponents' turns.

What I find to be true about playing politically is that players really don't like to feel tricked, so once your politics start to wear on them, they're likely to begin attacking you with the very creatures you helped strengthen. While there are some defenses to this backlash built into the deck (such as goad), a surprise Glacial Chasm for the last few turns of the game can really save your skin.

We'll close with a few sneaky backdoor tricks with Chasm.

If you've got a Crop Rotation in hand or an Elvish Reclaimer on board, don't be too quick to use them, as you can grab a Glacial Chasm at any point to buy you a perfectly timed semi-permanent Fog.

However, you'll want to keep getting use out of your Elvish Reclaimer, so my recommendation for early turns is to grab Survivors' Encampment or Holdout Settlement. These will let you tap down your Tahngarth at will if attacking doesn't make much sense but you still want the option of passing it around the table. And late game, these will let you do the trick of attacking around your Chasm. But also, very importantly, these are great with the unsung hero, Scaretiller.

What Scaretiller allows us to do is put our Glacial Chasm into play at instant speed if it ends up in our hand or graveyard, get it back from the 'yard if we've accumulated to many age counters on it, or just get us additional value from fetch lands like Evolving Wilds. It's incredibly serendipitous that the same cards we want for tapping our Tahngarth will also let us tap our Scaretiller on demand. Before you know it, you'll have a big cow leading the charge to victory and a tricky Scarecrow making sure the fights end in your favor.

There we have it, now you can play a game of League of Legends within your game of Commander. Have any other clever ideas how to incorporate components of the game I've missed? Towers, item builds, last-hitting minions, teammates flaming you in chat? Make sure to sound off in the comments!

And don't forget, you can find this list along with all the other Alter of the Brewed lists we've created in this handy folder over on my Archidekt profile!